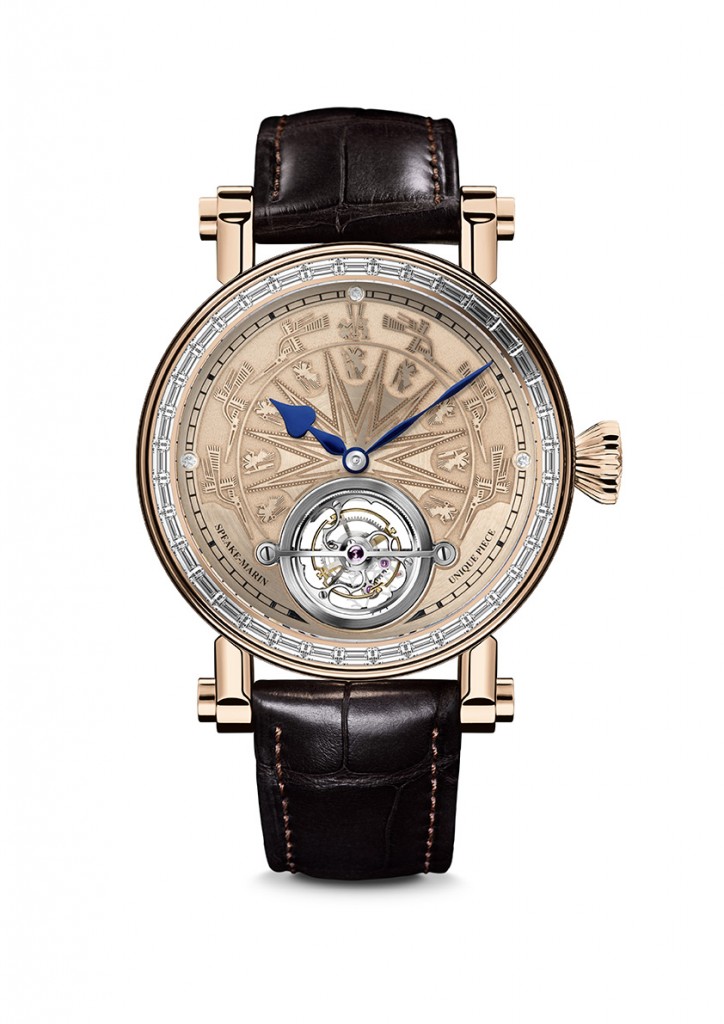 The dong son drum serves as the source of inspiration for Peter Speake-Marin’s latest release: the Diamond Magister  Dong Son Tourbillon. The drum’s origins trace to the Red River Delta of Vietnam dating back to approximately 600 BC. The drums were typically used in harvest festivals and rituals such as weddings and funerals, as well as acting as  symbols of status and power for tribal leaders. Just about 200 of these drums have been found from areas ranging from eastern Indonesia to Vietnam to parts of southern a China. Making their appearances in different regions more impressive is the fact the drums weigh in at over 220 pounds. To create a piece of that weight — anywhere from one to seven tons of copper ore needed to be smelted. The sides of the drums were typically adorned with carvings of geometric patterns and depictions of everyday life such as farming and war.

It is these depictions etched on the sides of the drum that Peter Speake-Marin has accurately represented on the red gold dial of the newest Magister Dong Son Tourbillon watch.  The outer ring of the dial features egrets while the inner ring features warriors adorned in full battle armor that also function as hour markers. The hour and minute hands feature the Speake-Marin signature ‘Foundation’ style hands of his signature first watch — created in blued steel. At the six o’clock position is the 60 second tourbillon framed by a polished bridge constructed from Durnico steel. Durnico is part of a family of steel alloys referred to as maraging steel which are all known for their high strength and malleability, which is precisely why it was chosen for the watch. 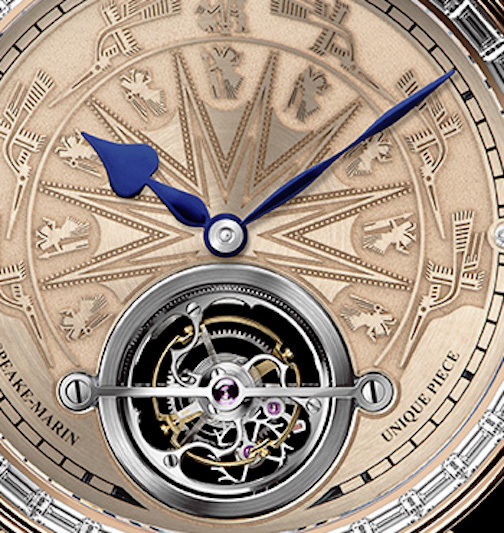 The warriors etched onto the dial represent the hours

The back of the watch reveals the superb finishing elements of the piece. The platinum micro-rotor can be viewed, along with the rhodium finished German silver bridges and movement plates with polished screw heads and counter skins. The watch is powered by the in-house-made self-winding SM3 60 Second Tourbillon  and provides a 72 hour power reserve. The 18k red gold Piccadilly case measures 38mm and is a piece that bridges the gap between art and horology.

With the facts out of the way, let’s get to the emotions. This grandly etched dial, inspired by those bronze drums of prehistoric age, is an intricate and powerful work of art. Add to that, the stunning tourbillon with large aperture — in its constant dance — and you have a sure-fire winner.  Says Speake-Marin,  “The tourbillon is one of the elements that I love most about watchmaking because of the animation it brings to the dial. It shows time moving in a way that a minute-repeater or grande sonnerie can’t offer.”