One of the many things that makes Jaeger-LeCoutre a great brand and one of the major manufactures to follow, is how they are able to innovate across a number of different lines and price points while still maintaining the identity of each family of watches. That skill is once again on display at SIHH with the addition to the Doumetre family of the Doumetre Spherotourbillon Moon.

Those that have followed the Doumetre family know the line is all about precision and all pieces with said nomenclature feature the use of Dual-Wing system. The system gives the watches dual power sources. One source provides the power for precision/time keeping functions and the other powrs the given the complications. The end result are high complication pieces that do not sacrifice accuracy. (More on that in just a bit.)

The mechanics of the timepiece’s moon indication are so precise that it deviates by one day every 3,887 years

The Moon is a follow onto the 2012 release of the Doumetre Spherotourbillon and as the name indicates the latest addition adds a moonphase complication. However, to say that the line has added a moonphase complication is somewhat of an understatement as this is no ordinary moonphase.  Typical moonphase complications, if worn regularly, show a one day discrepancy every two and a half years. A Jaeger-LeCoultre piece with the same complication will show that discrepancy  once every 122 years. The Doumetre Spherotourbillon Moon, with moon disk constructed of blue lapis lazuli, will remain accurate for 3,887 years! Again that’s assuming it’s worn regularly throughout the timeframe. Did I mention earlier that the line is all about accuracy? This is a piece of haute horology that will last throughout the generations and is the heirloom piece of all heirloom pieces.

The harmonious balance of this complicated watch is also a feat. At the twelve o’clock you will find a second time zone indicator and next to that a day/night indicator. At the 3 o’clock you will find the other notable function:  the Spherotourbillon. Housed in a titanium cage, the  tourbillon is viewable from the front, back and side of the watch and has been inclined by 20 degrees. Aside from being a nod to the earth’s 23 degree tilt on its axis, the inclination of the Tourbillon frees the Moon from the effects of gravity on timekeeping.  To keep the time accurate, the movement allows the user to set the watch to the second and the Dual-Wing system allows the Tourbillon to still run while the second hand is being set via a flyback function.  The pusher can be found at the two o’clock and the small second hand at the six. 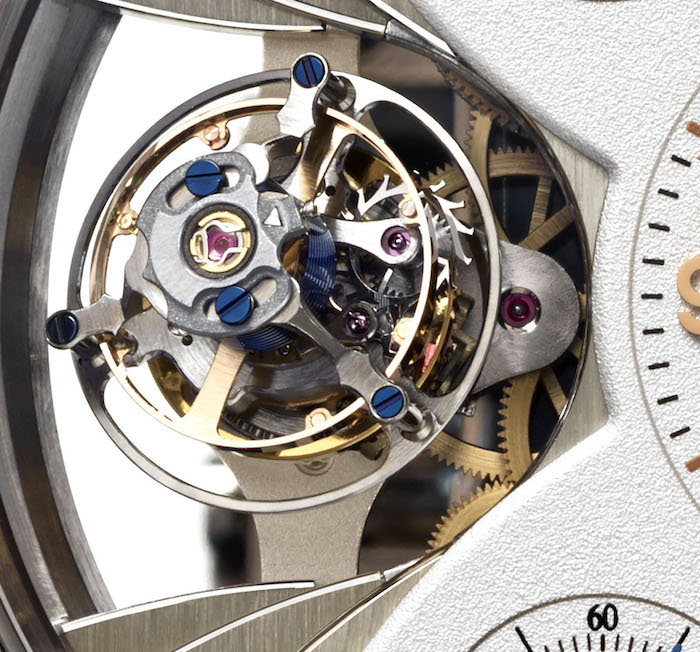 This is obviously a major release for Jaeger-LeCoutre in a year where they are literarily shooting for the stars. 2015 will see the release of the Master Calendar Meteorite in stainless steel and pink gold, which have covered here and now the addition to the Doumetre family with the Doumetre Spherotourbillon Moon. Given the technological firepower of the Moon, wearability is not sacrificed and comes in at 42 mm. The piece will currently only be available in platinum, presented on a black alligator strap.