Back in November, I was one of a very elite group of watch journalists from around the world invited to join Montblanc in Cape Town, South Africa, for the unveiling of a new collection of timepieces. That line is called the Heritage Collection in general and with each Heritage watch released there is a special Vasco da Gama version — hence, the reason for the trip.

The Vasco da Gama pieces recall a time of exploration – a time when this seafarer traveled the world looking for new sea paths that would open new trade and colonization. It was the 1400’s and early 1500’s – before chronometers, or even sextants. Vasco da Gama navigated by the moon, the stars and the Southern Cross. His skills paid off and in 1497, he became the first European explorer to reach India by sea, linking Europe and Asia in a shipping route around the Cape of Good Hope. The voyage spanned 300 days at sea with a 60-person crew on board a 27-meter long boat. In the new Vasco da Gama watches, Montblanc pays tribute to the Portuguese explorer’s sense of adventure, innovation and precision – attributes the brand holds close.

The complex new Heritage Collection and limited editon Vasco da Gama pieces – officially introduced here in SIHH – also mark the debut of three new movements, and is a superb collection that deftly marries the precision watchmaking at the Minerva workshops in Villeret with the more affordable Montblanc line. Each of the watches will undergo the brands famed 500 hours of testing.

Each Vasco da Gama watch has some special added element above the Heritage version. In the Heritage Chronometrie Quantieme Complet annual calendar line, for instance, the Heritage watches feature an arc-shaped moonphase indicator at 6:00, but on the Vasco de Gama version, the moonphase indicator is a complete sphere at 6:00 and displays the stars — complete with the Southern Cross — as he would have seen them from his positioning in the Southern hemisphere. 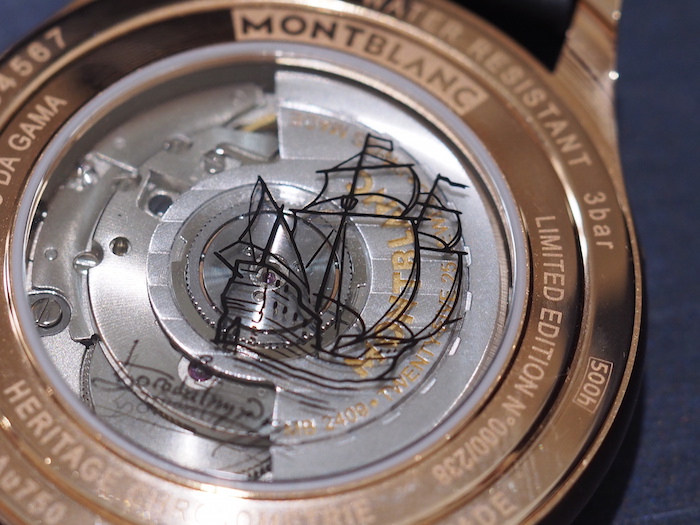 The back of the Montblanc Heritage Exo Tourbillon Vasco da Gama

Other watches in the new collection include a Monopusher Chronograph with vertical clutch, a dual time UTC, and a new Exo Tourbillon chronograph with patented construction that includes a stop-second mechanism. The Vasco da Gama version of the Exo Tourbillon, created in a an edition of just 60 pieces, features an exquisite Aventurine dial and has the image of the Sao Gabriel – da Gama’s ship – etched on the sapphire caseback.

Making the collection even more exciting are the attainable price points of the Heritage watches. In fact, the Chronometrie Quantieme Complet annual calendar retails for less than $5,500, and the ExoTourbillon Chronograph retails for just about $54,000.