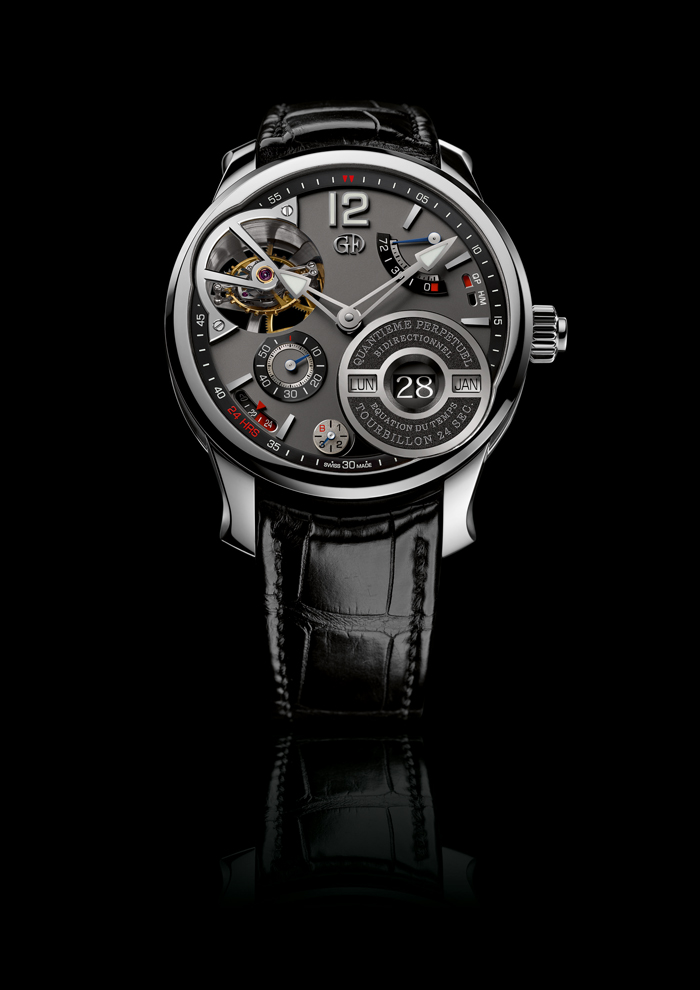 Greubel Forsey is a brand we have covered a number of times here at A Timely Perspective and one of the things that continues to bring us back to the brand is not only its pursuit of horological innovation, but also the detail-obsessed manner in which they go about enhancing their pieces. Their latest invention is the  Computeur Mecanique and its application in the just-released QP Equation is going to be on the lips of many a horological nerd at SIHH. You need to know why.

To fully appreciate Gruebel Forsey’s QP a Equation of Time, you need to understand one of its critical components and the brand’s 7th invention: Computeur Mechanique. Comprised of 25 parts and owning several patents, t Computeur Mechanique was inspired by the large astronomical clocks that were prevalent towards the end of the 15th century. What made these clocks so alluring is that they tracked key dates in the Christian calendar in relation to astronomical data. Several of these clocks are still functional and are considered national treasures. Some feature apostles that make rotations around the face of the clock once every 24 hours while others have a procession of Jesus and the disciples making an appearance when applicable. 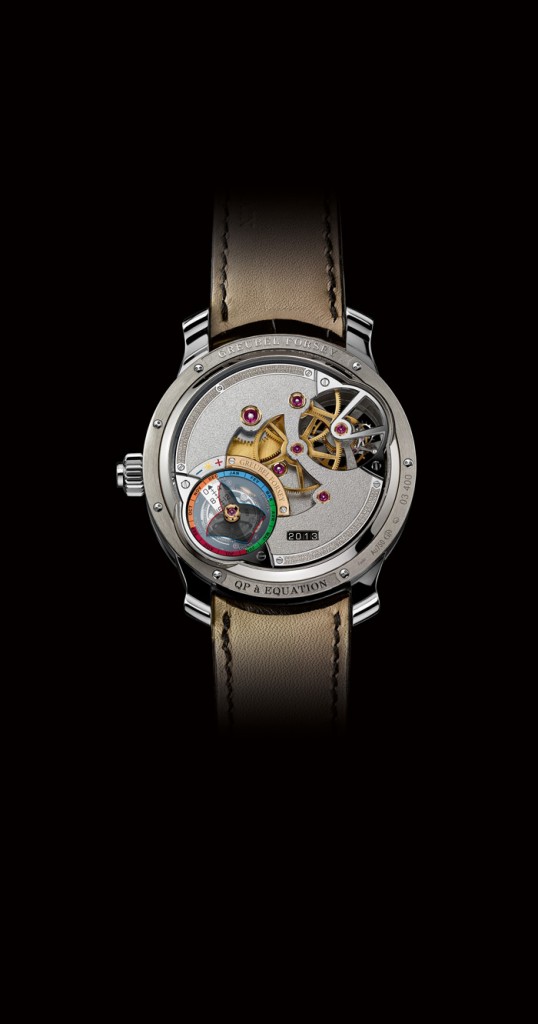 The Reverse side of the QP a’ Equation of Time

If you’re looking for horological inspiration, this time period is a great place to start, and as the name implies, the Computeur Mechanique is designed to be a mechanical computer (my High School French classes are paying off!).  The piece is comprised of rotating coaxial coded elements that sit in an arrangement of programmed movable sections. The goal is for the piece to be totally dedicated to governing the functions and indications necessary of a watch requiring the exact measurement of an astronomical clock reduced down to a wrist watch.

The miniaturization of the system allows for the QP a Equation to track and easily display all of the indications of a perpetual calendar. Day, date, month, four digit year (leap years are accounted for), seasons, solstices, and equinoxes are all indicated down to the equation of time. The equation of time is one of horology’s most difficult complications and allows for the piece to indicate the difference between solar time, the actual length of a day as the earth spins on its axis, vs the mean day, which is the 24 hour day. The differences between the two fluctuate throughout the year and as seasons progress those changes can range from plus 16 minutes 23 seconds on November 4th to minus14 minutes 22 on February 11th. New for 2015 SIHH is an update to the equation of time display on the back of the timepiece. Two sapphire crystal discs governed by the Computeur Mechanique are rotated independently to show the difference in time over the course of the year. The discs, which are shaped like a manta ray, are colored in red and blue to allow for increased legibility. 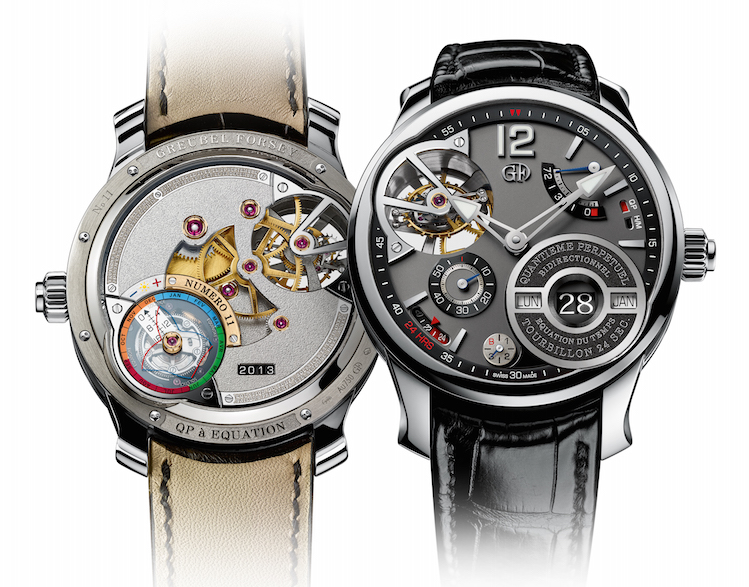 The technical advancements are astounding, but as electronic computers have shown us, technological advancement without an easy to use interface is meaningless as unnecessary complexity will drive the user away. (Don’t believe me? I think we can all remember the countless number of comedians in the 80’s making VCR clock jokes, let alone the number of grandparents put off by computers.) Thankfully, Greubel Forsey has paid as much attention to how users will interact with the watch and has reduced adjusting all eight of the indications down to the push of just one selector. Located in the winding crown, turning the selector forward or backward can be done without any risk to the movement or mechanism and all of the indicators will update seamlessly. This ensures that should you stop wearing the piece, all of the complications can be easily reset on the fly. (The only exception being when the 24 hour indicator located between 7 and 8 o’clock is in red, marking the time when the user should not adjust the timepiece.)

Other aspects of the piece are signature Greubel Forsey. You will find the 24-second fast-rotating Tourbillon inclined by 25 degrees (an innovation developed by the atelier that adds to the accuracy of Tourbillon itself) at the 11 o’clock position, the perpetual calendar is found at the 5 o’clock and the power reserve indicator at the 2 o’clock. Given the technical nature of the piece Greubel Forsey will only be manufacturing approximately 5 per year. Additionally, while the final price had yet to be announced, given the brand’s history with models showcasing similar complications, potential buyers will be looking at a hefty price. 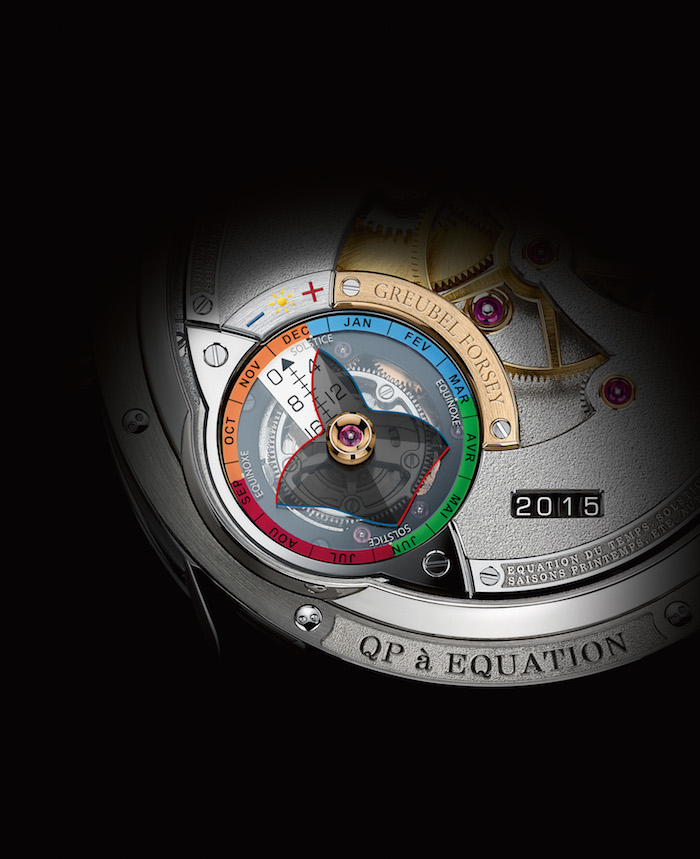