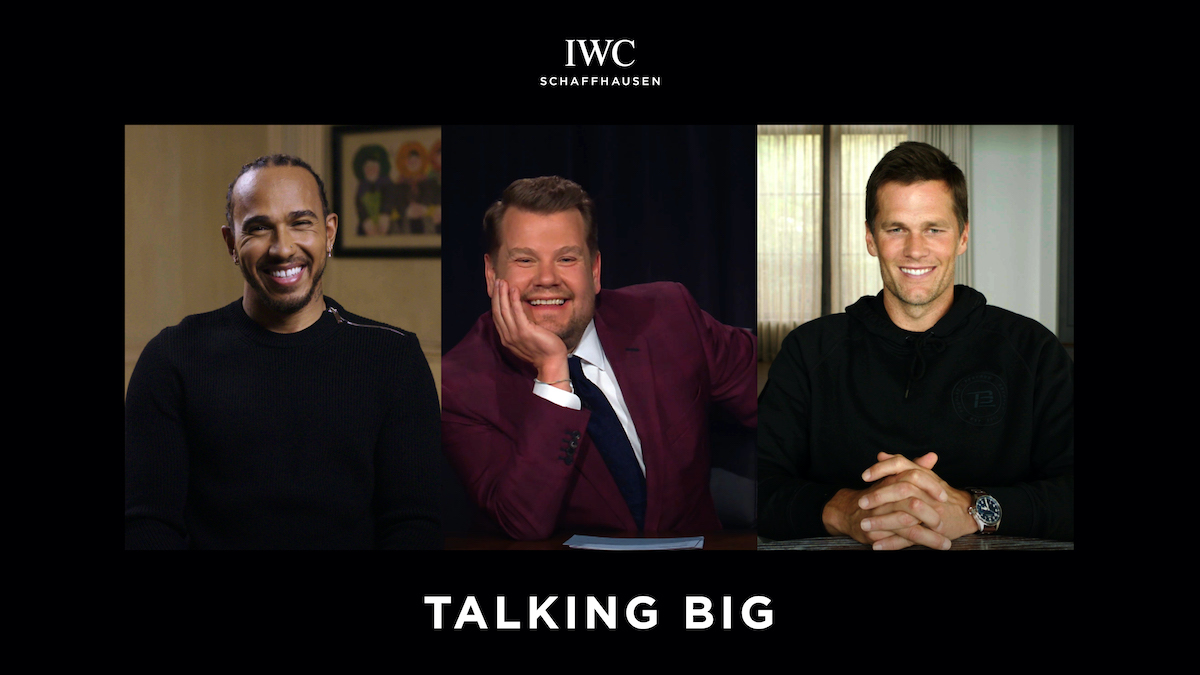 In February, Brady claimed his seventh Superbowl victory with his new team, the Tampa Bay Buccaneers, and was named Super Bowl MVP for a record-breaking fifth time. Hamilton clinched a seventh drivers’ championship late last year with his team Mercedes and now has more race wins and pole positions under his belt than any other Formula One driver in history. Together, they are considered two of sport’s Greatest Of All Time (GOAT).

It was just last year that IWC created its Born of Dream series, and included Tom Brady’s story in one of the videos. Now, the conversations take a slightly different approach, with each seven-time champion sharing their stories and insights with the host and viewers, and even playing a game of true or false. Here, we bring you a few excerpts from the talk.

James Corden: “Now, look, you have so much in common, yet your sports are completely different. What similarities do you think you two share outside of being – frankly for my liking – too good looking to be athletes? Like, Lewis, when you look at what Tom does, do you see any similarities?”

Lewis Hamilton: “I do. I mean, I watch really closely what Tom has achieved, some of the things that Tom does in his training. How he prepares himself. How he conducts himself with his team. There are so many things that you can take from watching a great athlete like Tom that you can then apply to be a better athlete yourself.”

Tom Brady: “Yeah. I mean, Lewis was, from the time he was a teenager, one of the real prodigies of the sport. And Lewis already trained this morning for, I don’t know, 10, 12 hours, something like that. How many other people are doing that? That’s why he’s the greatest Formula One champion of all time.”

JC: “Just hearing you say that, Tom, you reminded me about when Lewis was young and you had won a kart tournament, and I think you went up to Ron Dennis, who was running the McLaren team, and you said, “Hi. I’m Lewis Hamilton, and I’m going to race for you one day.” And then, Tom. Am I right in thinking that when you first signed your professional contract, you said to the owner of that team, “I’m going to be the best decision you ever made.” Is that true?”

LH: “I, at a young age, thought, “Okay. I know I can do this”. I had a lot of training and I was prepared, and I knew when I got my opportunity, I was going to take advantage. So, I was very fortunate to get the opportunity shortly after. I don’t know how it’s been for you, Tom, but in my life, absolutely everything that’s happened, it’s been something I visualized or dreamt of. I just gave everything to get to those places, of course, with a lot of help from great people around me. I had a vision and had that belief in myself, which enabled me to get it. And of course going back 10, 15 years, you could have never imagined that those things would really come true. And to the boss, 10 years later, he gave me a deal and I won the world championship for him 10 years later. So, it’s crazy to hear that’s something similar to Tom.”

All about timing and watches

TB: “I think when the timing is on your side and the rhythm is right, you’ve got to stay there, and you’ve got to find ways to maintain that. And that’s hard to do because there’s a lot of external forces coming at you because usually, you have an opponent who’s trying to do the same thing. When you’re out of rhythm and your timing’s off, a lot of people still just charge at the same tempo, and I always think that’s a good opportunity to actually slow things down. And, hey, where are we at? How do we re-evaluate this? You get into the game and the first half of the game doesn’t go the way you want. Well, you’ve got to change the rhythm, change it. And then, once you get it, then you keep it.”

JC: I know both of you have a shared love of watches. Lewis, what is it about watches that you love so much?

LH: I’ve always been into the mechanics of it. As a kid, I was always taking things apart and rebuilding them. When you look at one of these watches and there’s 500 pieces all put together by one person, the craftsmanship I think for me is fascinating. Plus, the pieces obviously are tiny. I remember getting my first watch, it was from Argos in England, and the watch is like six pounds. I remember saving up for that watch. I went to school and I felt really proud. I used to wear it outside my blazer, and I thought that it elevated me.

JC: What about you, Tom, when did you first discover your love of watches and what they represent?

TB: Certainly for men, there’s not a lot of jewelry that we typically wear, and a watch does, as Lewis said perfectly, elevate your look. In college, I knew I was going to become a professional and I had this image as my screensaver on my really old computer of a watch. It was the IWC GST Automatic Alarm from like the late ’90s. So, I had the screensaver and I thought, “If I ever make a few bucks, this would be the watch that I would want.” And I ended up buying my first watch at a Tourneau store on 57th Street in New York.

True or False On Tom Brady and Lewis Hamilton

JC: Tom, you’re going to go first. These questions are all about Lewis Hamilton. And your time starts now.

JC: Lewis can lose around eight pounds of weight during a single race.

Lewis has won 90 races during his career, true or false?

JC: It was false. It was “Pipe” under the pseudonym XNDA. Okay. True or false, Lewis has a cameo in the Pixar movie “Cars 2?”

TB: True. Boom!
JC: True is correct. Okay. Lewis was just 13 years old when he got his first Formula One contract? TB: True.

JC: True is absolutely right. Look at that. He got six questions right. So, Lewis, your best chance here is to tie with Tom Brady. There’s a lot of pressure on your shoulders now. The best you could do is tie. … Okay. Here we go. Questions for Lewis. Lewis, here we go, 60 seconds on the clock, please. These questions are all about Tom Brady.

True or false, Tom Brady has never had a cup of coffee?

LH: True.
JC: It is true! Tom, you should try it. It’s so good! Okay. Question two: Tom threw for 2,217 yards and 16 touchdowns his senior year playing for the Ohio State Bucks?

LH: False.
JC: False. You’re right. He played for the Michigan Wolverines. True or false, Tom was the 89th pick in the 2000 NFL draft?

JC: True is right. Professional baseball team, the Montreal Expos, wanted to sign Tom in ’95 before he turned them down, true or false?

JC: Okay, great. Tom Brady made a cameo in the HBO series Entourage, true or false?

I cannot tell you, Tom and Lewis, any time I’ve been around either of you, it is always a thrill to be in your orbit. But to get this moment to talk to you both together is an absolute thrill for me. It really, really is. Congratulations on everything you have achieved in your sports and everything that you’re going to carry on doing. We know the debate will rage on about who is the greatest sprinter, basketball star, tennis player, but there is no question that you two belong amongst the sporting greatest of all times.