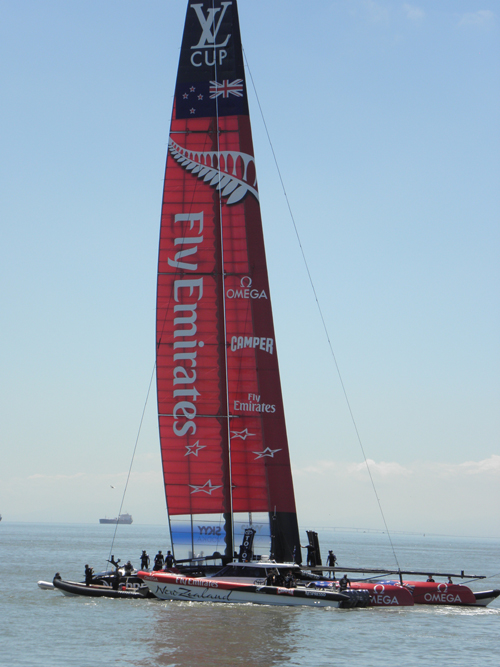 Last week, we here at ATimelyPerspective had the distinct pleasure of joining Omega in San Francisco, as the brand unveiled its newest America’s Cup Regatta watch (which we will cover in more detail shortly) made in cooperation with Emirates Team New Zealand. We also spent some time with skipper Dean Barker of ETNZ and the team, as they readied the AC72 for sailing maneuvers. 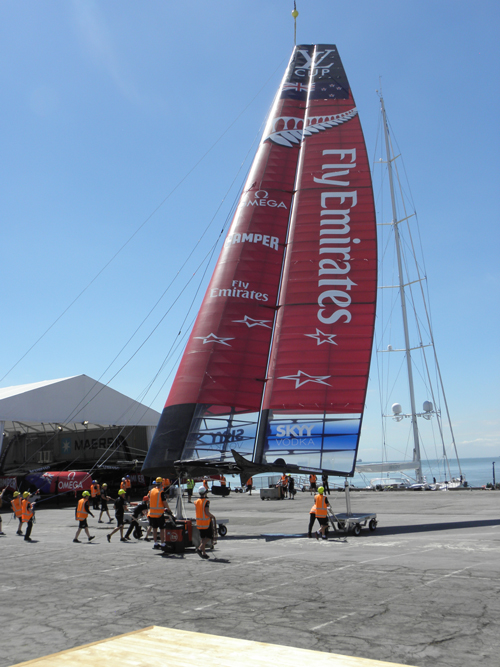 Bringing out the sail for ETNZ

This year’s 34th America’s Cup Races — taking place in September in San Francisco’s cold bay waters – required competitors to build the uber-expensive, giant-sized AC72 catamarans. The 72-foot long boats feature a rigid sail that stands as tall as a jumbo jet is long. It has to be lowered into place on the catamaran by a boom, and then the catamaran must be placed into the water by that same boom. The arduous set up is a feat all by itself – sort of taking a little bit away from the classical concept of “sailing.” 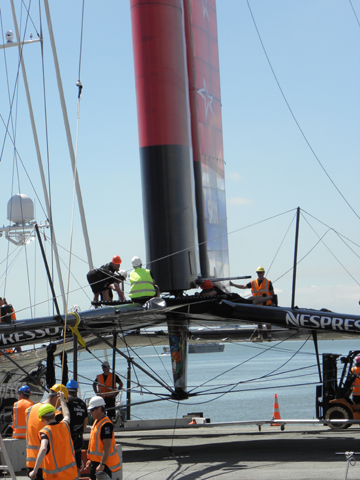 ETNZ, final attachment of the sail.

Nonetheless, because Oracle – the Defender of the America’s Cup – could make the rules for the competition, the new AC72s will grace the waters throughout July and August in the Louis Vuitton Cup Challenger Races. Sadly, there will be only two challengers beginning the race – ETNZ and Luna Rossa. It is hoped that Artemis will be able to make it back into the end races with the teams second AC72 (the first was destroyed in a fatal capsize about 6 weeks ago).

According to ETNZ’s Grant Dalton, managing director of the team,  the sail of the boat is more like the wing of a plane and the aerodynamics and engineering technology that go into its making is quite complex. In fact, one of the 35 engineers and designers on the boat-building team is a Lockheed guy who has worked on Stealth aircraft.  The  cost? Huge. “The engineering and design of the boat took two years,” says Grant, “The hardware isn’t’ the big cost, you can build two of these boats for about $20 million, but the true cost is the years of engineering and technology and time that goes into it.” In fact, the cost to get ETNZ on the water for this year’s Challenger Races beats to the tune of over $100 million. 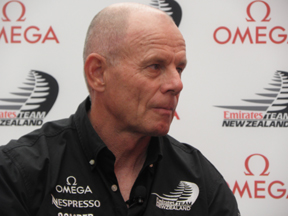 This year marks the fifth consecutive sponsorship by Omega of ETNZ since 1995, but the brand was involved in sailing and the sea for much longer.  “Water sports is part of our core philosophy,” says Stephen Urquhart, President of Omega. “We have sailing on top of the water, diving and the support of preserving the oceans under the water, and Olympic swimming.” 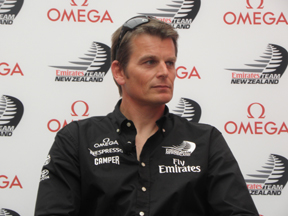 As to the sailing and the Louis Vuitton Challenger Races, team skipper Dean Barker says the team is excited to be in San Francisco, where the wind is fast, people can watch from the shore, and –thanks to the backdrop of the Golden Gate Bridge and Alcatraz – “everyone knows where you are racing.” 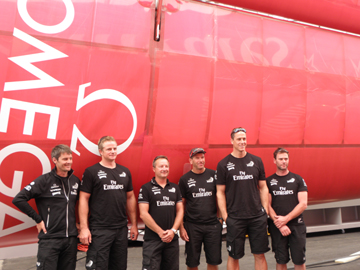 Stay tuned for more info on the new Omega ETNZ watch and an exclusive interview with Omega’s President.

I Went To The Seaglass Rose’ Experience With Corum, Here’s What Happened
July 2, 2013