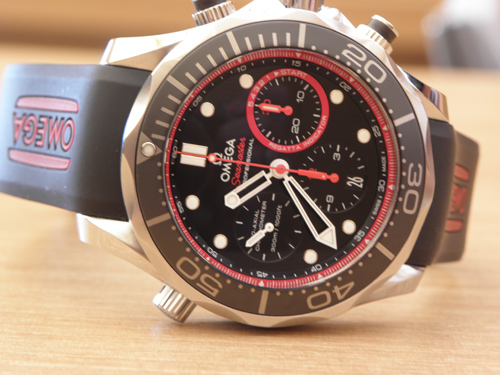 Yesterday, we brought you a behind-the-scenes look here at Emirates Team New Zealand and the new AC72 catamaran set to compete in the Louis Vuitton Challenger Races for the America’s Cup. Omega is a proud sponsor of the Team and has been for years. 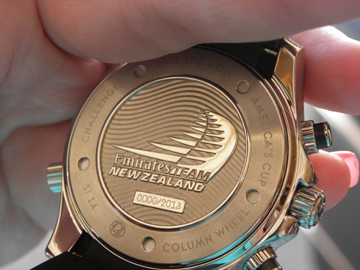 The caseback of the ETNZ watch features the Team’s logo.

As such, Omega now releases the new 44mm Seamaster Diver ETNZ Limited Edition watch. “The new watch is the model that was first unveiled in 2001, the Aqua Terra, but with updates,” says Stephen Urquhart in a private interview. “We listened to the team about design and functions they wanted.”  Among those updates:  the polished and brushed steel case sports a matt black ceramic bezel ring. Offered on a 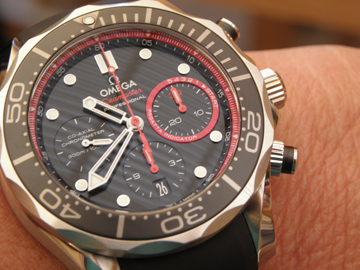 ETNZ on the wrist

black rubber strap with red Omega on it – the watch celebrates the red and block colors of the Team.  The screw-in caseback is embossed with the ENTZ logo and the watch number and “Challenger for the 34th America’s Cup” are engraved on the caseback. Just 2013 numbered pieces are being made. 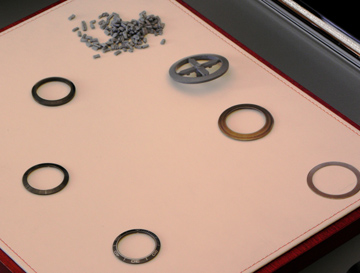 The COSC-certified chronometer column-wheel chronograph watch (with 30-minute chronograph recorder) also offers the five-minute countdown to the start of a regatta in increment indications.  The self-winding timepiece is powered by the Co-Axial Caliber 3330, equipped with a SiL4 silicon balance spring. Making it ever more versatile, the ETNZ watch features a helium escape valve for professional diving to 300 meters.  The watch will retail for just about $6,000.