Recently, in New York City, the renowned high-end Parisian seafood restaurant Le Bernardin, where famed chef Eric Ripert curates an exquisite menu, reopened with much fanfare. Ripert has worked as a chef since he was 17 years old, when he began at a famous restaurant in Paris (La Tour d’Argent).  At the age of 24, he moved to the USA, where in 1994 he became the executive chef at Le Bernardin, which has since been awarded the maximum 3 Michelin stars for excellence in cuisine. Ripert is incredibly cognizant of time in his work, and even owns multiple luxury watches. (Below is a brief excerpt of Roberta Naas’ interview with Ripert, as seen in Gotham Magazine, Nov. 2011.) 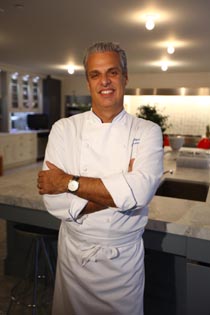 “Time is everything in my business,” says Ripert. “I need to be on time to lead the team at our restaurant, our staff must be on time and ready so we can take care of our clients. Accuracy is key, as well, and that depends greatly on having the correct timing with everything.  With cooking, and pastry, a few seconds too much or a few too little can ruin a dish. Cooking involves precision and precision means time.”

For Ripert, time has played an important role in his success as a chef in this city that never sleeps.  He admits that he was in the “right place at the right time” when he joined Le Bernardin. “When I first walked in to Le Bernardin as an employee, I remember looking at my watch. I knew it was a special moment, a turning point in my life. I will never forget that time – it was exactly 7:40 am on June 11, 1991. I will remember that forever.” In fact, the VC American 21 watch he recently received as a gift from his partner at LeBernardin has that exact time and date inscribed on the caseback.

Ripert says in addition to preparing exquisite menus and dishes, he has developed a penchant for watches.  “I actually love to collect watches. My first watch was given to me when I was 15 years old. It was a Cartier Santos. Today I have about a dozen watches in my collection; many of them (luckily) are made by Vacheron Constantin.”

Other loves of Ripert’s life? His dedication to feed New York’s hungry. Ripert has become instrumental in New York’s City Harvest, the food rescue organization that collects excess food from the food industry and distributes it to nearly 600 community food programs. Le Bernardin donates daily, and Ripert is Chairperson of the Food and Beverage Council.