Would You Spend a Million Dollars on a Watch? These Brands Hope So

The biggest watch exhibitions of the first half of the year 2017 are complete and we found several key noticeable trends. Watches at the affordable spectrum were strong, and so were the uber-expensive watches. As such,  we bring you a comprehensive line up of six approximately $1-million-dollar watches unveiled this year. Would you spend a million dollars on a watch? These brands hope so … but if you don’t someone else will. 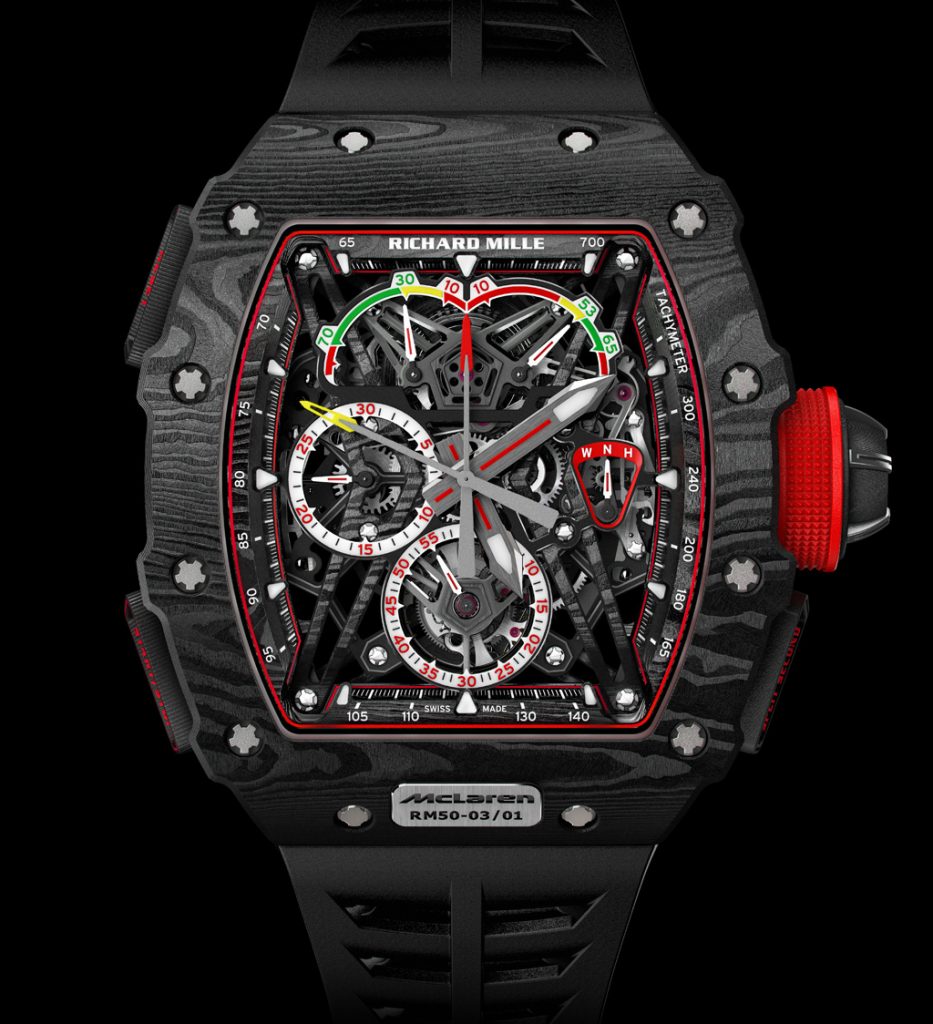 Not quite reaching the $1 million mark—perhaps by design – the Richard Mille RM 50-03 marks a milestone for the brand. The timepiece is the lightest weight split-seconds chronograph wristwatch in the world – weighing in at just 38 grams  thanks to the high-tech materials used in its case and movement (which weighs just 7 grams). Of course, you have to  add another two grams for the high-tech strap.

It makes sense that the watch be tied to the McLaren F1 team – which is known for utilizing high-tech materials and fraction-of-a-second timing. In fact, it is the first co-branded watch that marks the 10-year partnership between Mille and McLaren-Honda that was announced last year. Like all Mille timepieces, the watch is cutting edge and marks the first time the brand makes a case out of Graph TPT™, a material not used in watchmaking before. It also sports North Thin Ply Technology (NTPT) Carbon — which has become a sort of signature for Richard Mille tonneau watches of late. Via a compression and injection process, hundreds of layers are bound together to offer a case that is not only unique in looks, but also incredibly durable. Just 75 pieces will be made. 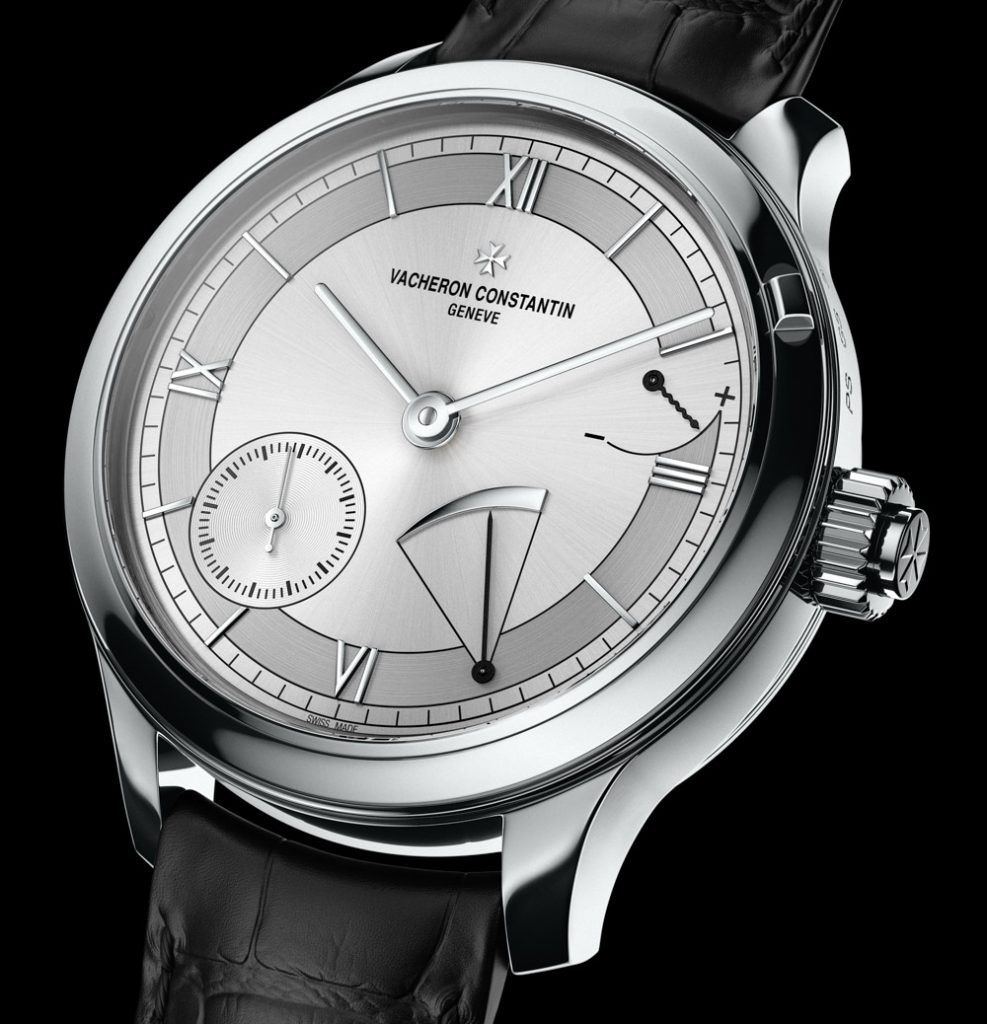 This year also marks the first time the venerable brand Vacheron Constantin unveils a Grande Sonnerie wristwatch. While the company has produced a host of chiming watches throughout its history, this is the first that is a wristwatch. The Symphonia Grande Sonnerie 1860 was 10 years in the research, development and design stages A single watchmaker – whom I got to meet and talk with during SIHH –spent more than 500 hours building the masterpiece.

The Les Cabinotiers Symphonia automatically chimes the hour, and quarter hours, and offers a petite sonneries (hours) and an on-demand minute repeater mode. Silence mode is also available – but why anyone would want to silence such beauty if beyond me.

The watch, despite its amazing complexity, is housed in a 45mm white gold case with a very clean and simple dial that shows hours, minutes, seconds and power reserve of the watch and the sonnerie. The watch is equipped with two mainspring barrels – one for the striking system (20 hours) and one for the watch (72 hours). 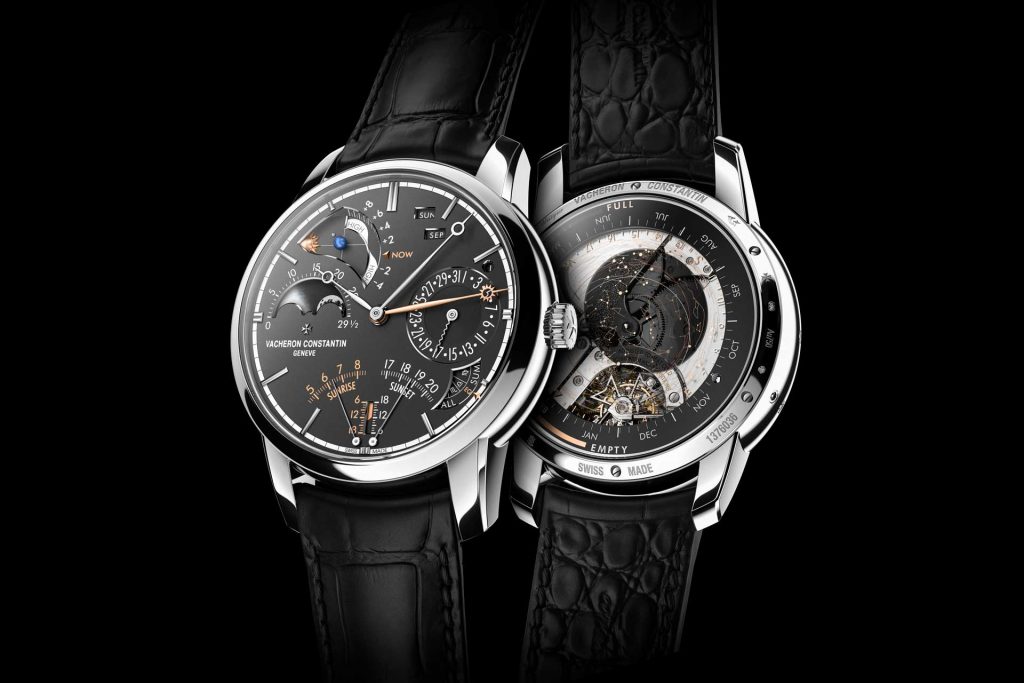 Also from Vacheron Constantin, which continues to push the watchmaking innovation envelope, is the Les Cabinotiers Celestia Astronomical – also valued at $1 million. The one-of-a-kind two-sided wrist watch houses the 3600 movement and was five years in the making. It boasts 23 different functions and multiple timing systems, each with its own gear train. A single master watchmaker in the brand’s bespoke department built the 514-part movement. The watch offers 15 indications on the front dial and another 8 indications on the back dial, including a patented sky chart. 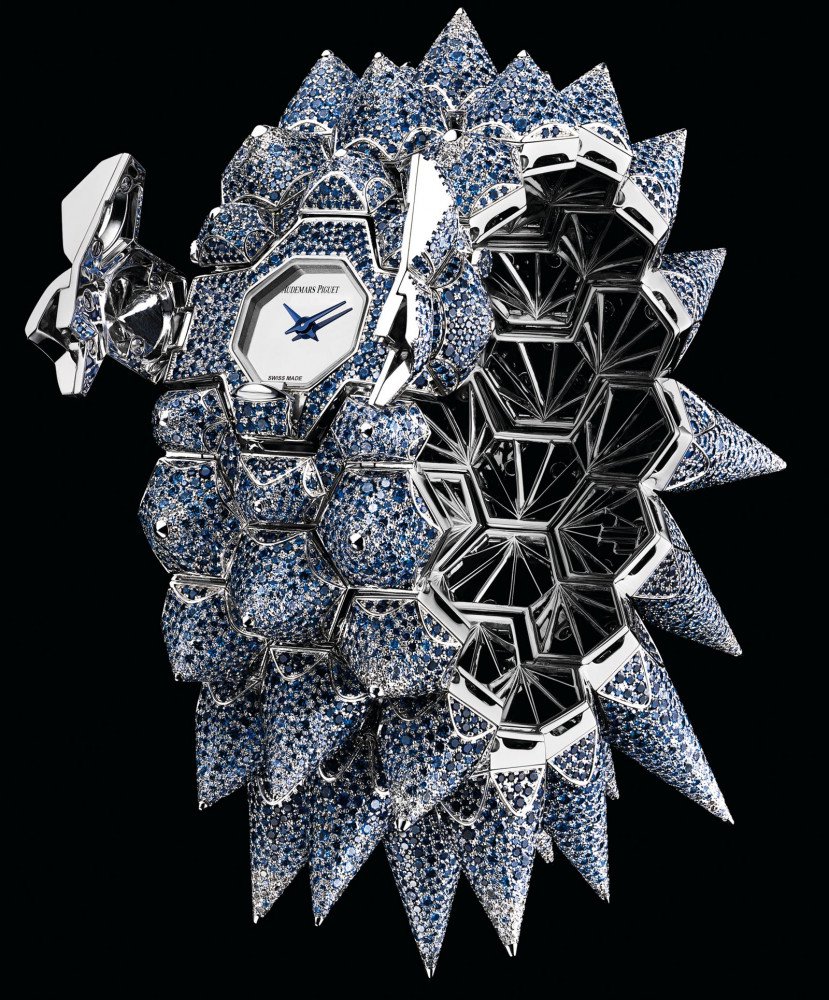 The master watchmakers and gem setters at Audemars Piguet have done it again == unveiling the third and final in its audacious Diamond series that started a few years ago. The new Diamond Outrage – being offered in a blue sapphire and white diamond version – rounds out the trilogy that started with the Diamond Punk, then moved on to the Diamond Fury.

The incredible watches are one-of-a-kind pieces that feature 46 spikes of 18-karat gold set with thousands of gemstones and hiding a secret watch within. The master gem setters have spent about 2,500 hours setting each timepiece – whose long spikes are meant to resemble the icicles in the Vallee de Joux. The sapphire version is snow set with 11,043 brilliant-cut sapphires in six shades of blue. In total, the stones weight 65.47 carats. While the sapphire version retails for $1.050 million, the Diamond Outrage retails for $1.24 million. Oh, did we forget to tell you: there is a secret watch – whose gemstone adorned doors open to reveal a quartz-powered mirror-polished-dial watch. 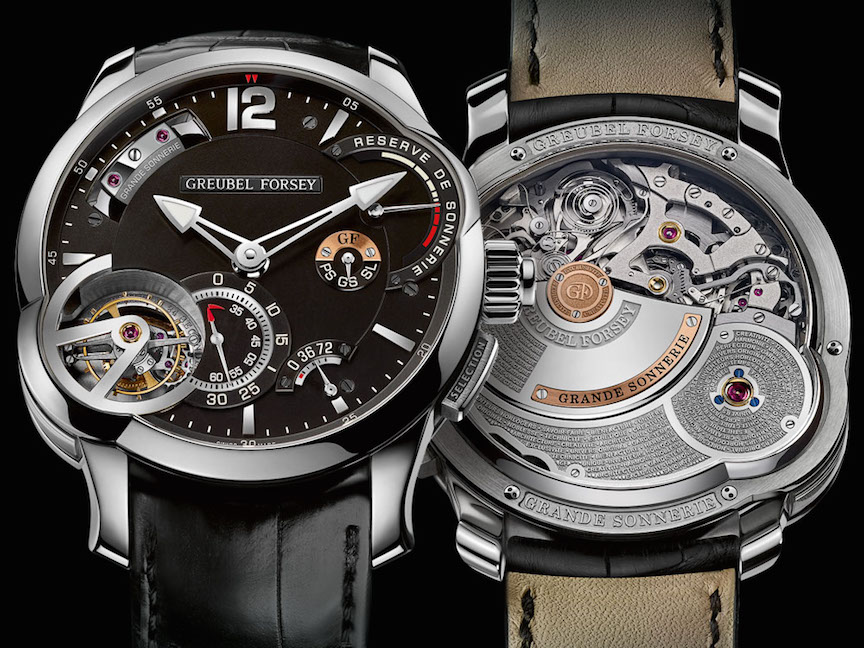 Those in the know about timepieces of collectible stature know that few brands compare to Greubel Forsey when it comes to ultra complications and chronometric precision. This year, the brand tops itself, though, with its first-ever Grande Sonnerie—a wristwatch that was 11 years in the making — has two patents pending and retails for approximately $1.4 million.

The super complex caliber consists of 855 components (the watch in total, has 935 parts). Not only is the caliber equipped with a specially made resonance cage for perfect chiming acoustics, but also it incorporates cathedral gongs and three hammers. It also, thankfully, has 11 security systems in place so that one doesn’t damage the mechanisms while chiming. As is typical of a Grande Sonnerie, the watch offers Grande Sonnerie striking mode (hours, and quarter hours in passing); Petite Sonnerie (strikes the hours in passing); Silence (to quiet the striking). It also operates as a minute repeater, chiming the hours, quarter hours and minutes on demand. The complicated timepiece is also equipped with the Tourbillon 24 Seconds (inclined tourbillon escapement too compensate for errors in timekeeping due to the effects of gravity on the watch). The 43.5mm titanium case offers clarity of sound. Just five to eight pieces will be built annually. 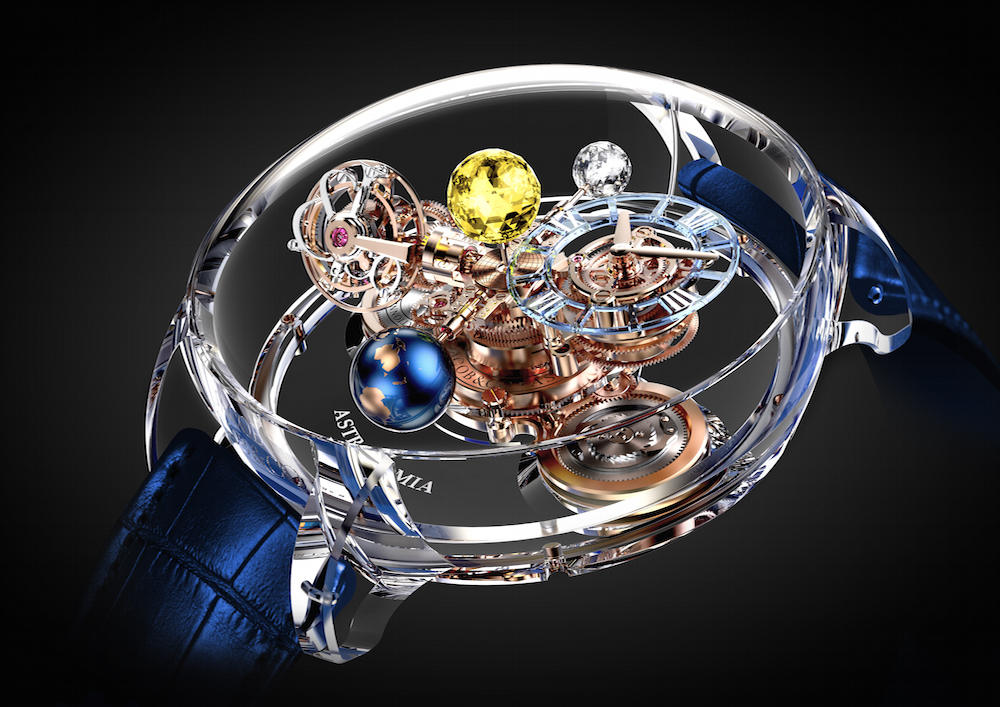 The making of this watch – from movement to case – is incredibly complex. First, it takes about 37 weeks to produce all of the sapphire case components, including the monobloc sapphire case, the case band and lugs, the dome and the caseback. The watch also features a sapphire barrel bridge in the movement, a blue sapphire dial and a sapphire buckle on the blue strap – all of which are created via a complex process of more than a dozen steps taking hundreds of hours – with a final tally of about 1,300 hours to make a single piece.