Oris has long been involved in the world of sports, from aviation to auto racing and diving. In fact, the brand has been creating dive watches since the 1960’s, and its timepieces are typically built to withstand the tests of weather, pressure, water and more. Now, they are built to help fight the threat of shark extinction.  With the recent release of the Oris Hammerhead Limited Edition watch, the brand gets involved in helping to raise funds for a shark conservation project run by the non-profit organisation Pelagios Kakunjá, and supported by Oris ambassador and professional diver Jérôme Delafosse.

According to research by ocean conservation experts who have tracked the decline of the world’s shark population over the past 50 years,  It is estimated that in about 40 years sharks may be extinct. In fact, according to the International Union for Conservation of Nature, the global population of Scalloped Hammerheads has declined by nearly 90 per cent over the past three decades.  Kakunjá’s newest mission is to discover more about the movements and migratory  routes of the endangered Scalloped Hammerhead species in the Eastern Pacific. 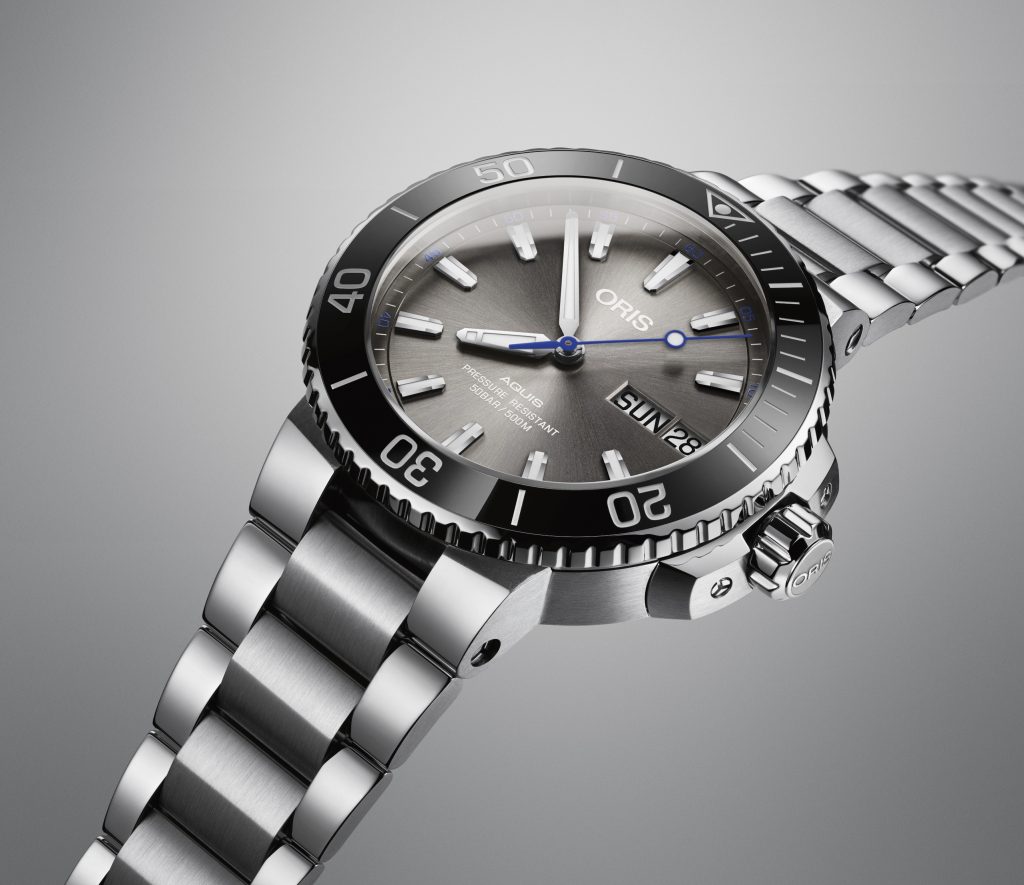 “We have to do something about the declining population of the world’s sharks,”  says Jérôme Delafosse. “Sharks play a vital role in the life of our oceans and we must do everything we can to ensure their future. It’s our duty to protect them.”

Project scientists will tag sharks using MiniP A T satellite transmitters funded by Oris. Each transmitter will track the sharks for six to nine months before being automatically released on a set date to float  to the surface of the ocean and transmit collected data to satellites. 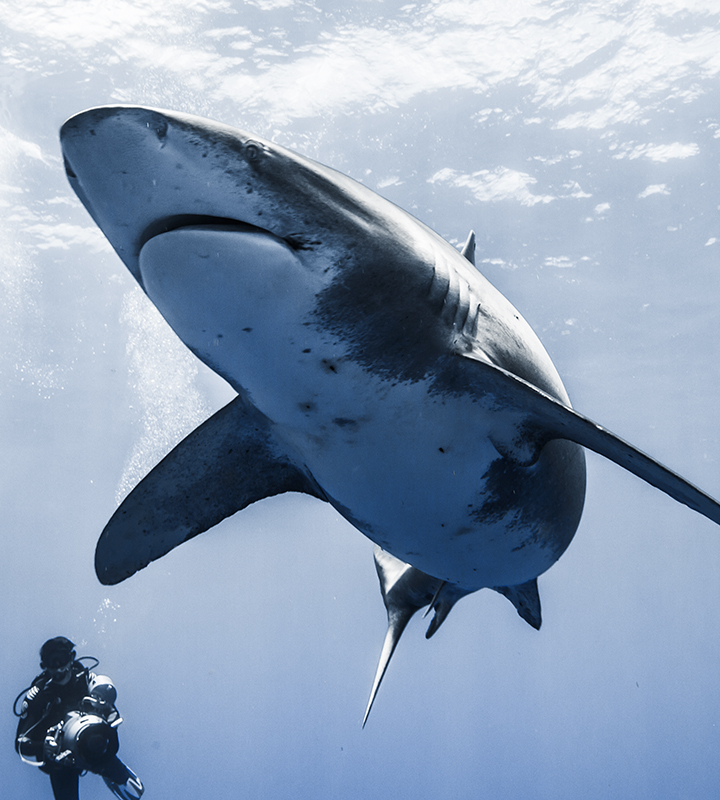 Oris unveils the Hammerhead Limited Edition watch that will help track the migratory path of this species.

The Oris Hammerhead Limited Edition watch is based on the brand’s second-generation Aquis collection that was unveiled earlier this year. The line is inspired by the original 2011 Aquis but with updated appeal.  The 45.5mm stainless steel  high-performance watch houses the Oris Caliber 752, an automatic movement with big day and date indications. It offers a uni-directional rotating bezel with a black ceramic inlay, and is water resistant to 500 meters. The rich gray dial of the watch is accented with a blue central seconds hand and a blue minutes scale around the outer edge. The case back is engraved with a hammerhead shark and the limited edition number. Just 2000 pieces will be made.  The watch is available for sale starting next month and retails for just about  $2,250 on strap and  $2,750 on bracelet.

According to Ulrich W. Herzog, Oris Chairman, “This watch is both a stark reminder of the threat facing the world’s shark population, and clear evidence of Oris’s commitment to fighting the extinction of endangered species. We are delighted to be supporting Pelagios Kakunjá and to be working with Oris ambassador Jérôme Delafosse, and we look forward to seeing the results of the project.” 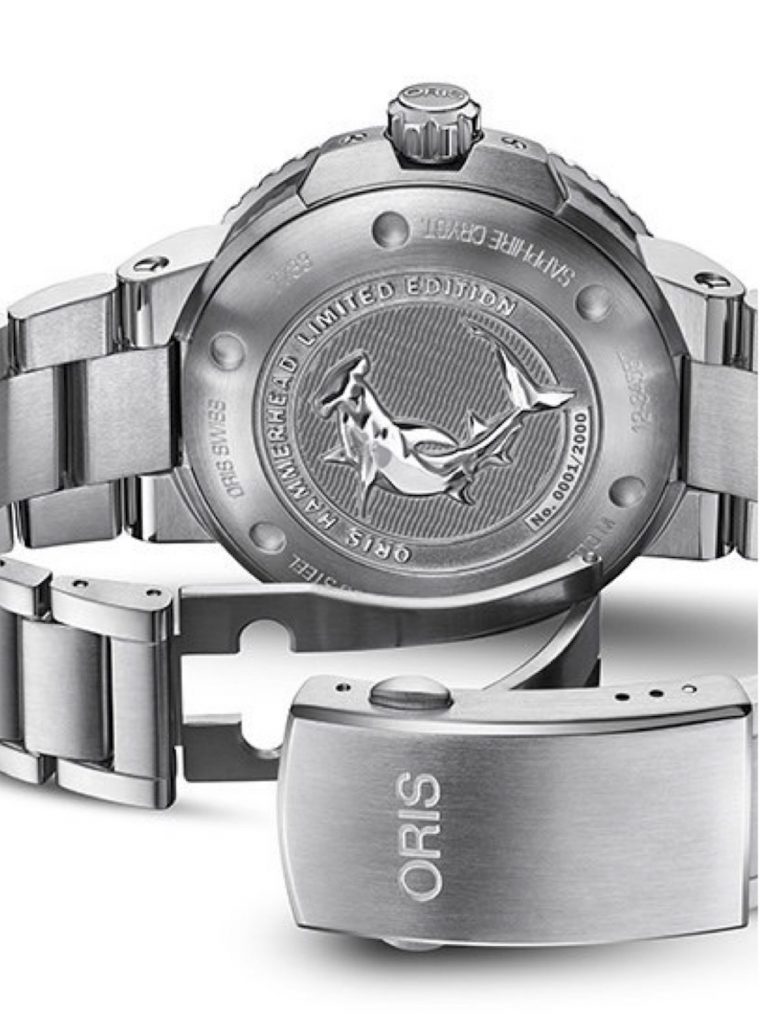 The case back of the Oris Hammerhead Limited Edition watch is engraved with a hammerhead shark image.

Oris brand ambassador Delafosse will join the expedition, along with conservationists Dr James Ketchum, who is the Pelagios Kakunjá’s Director of Marine Conservation. Also involved in the mission are  shark specialist Dr Mauricio Hoyos  and record-breaking freediver and underwater photographer Fred Buyle.

The Oris Hammerhead Limited Edition watch is sold  in a special presentation box with an insignia of a hammerhead shark. 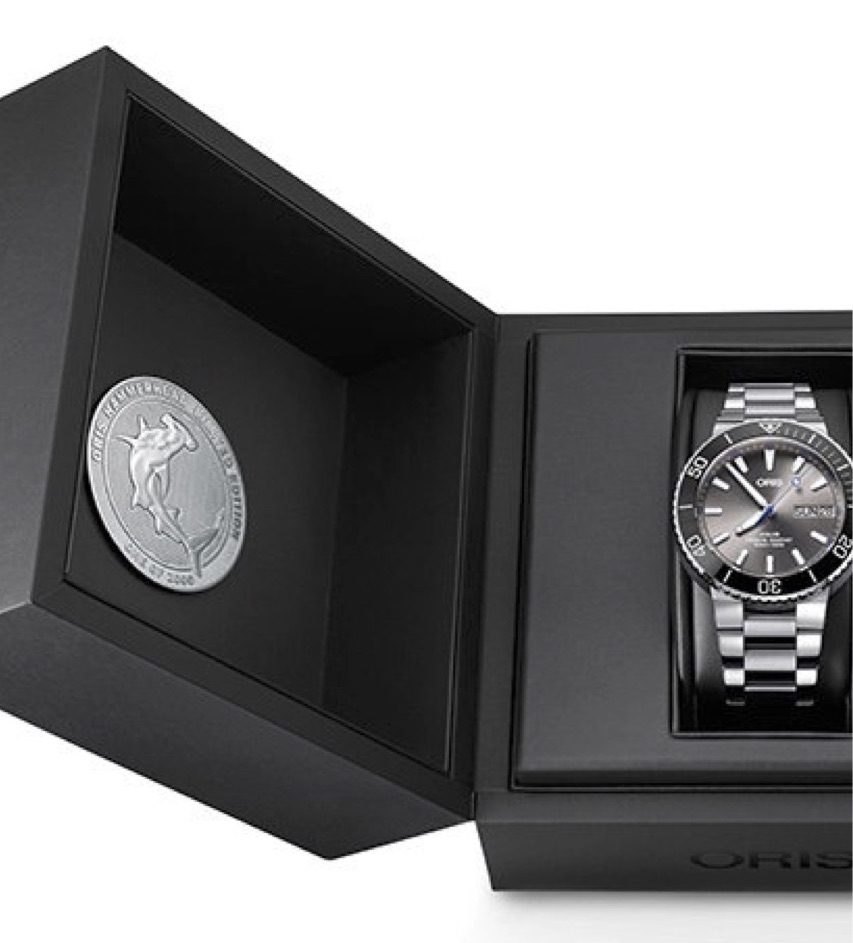 The Oris Hammerhead Limited Edition watch is sold in a presentation box with shark medallion.