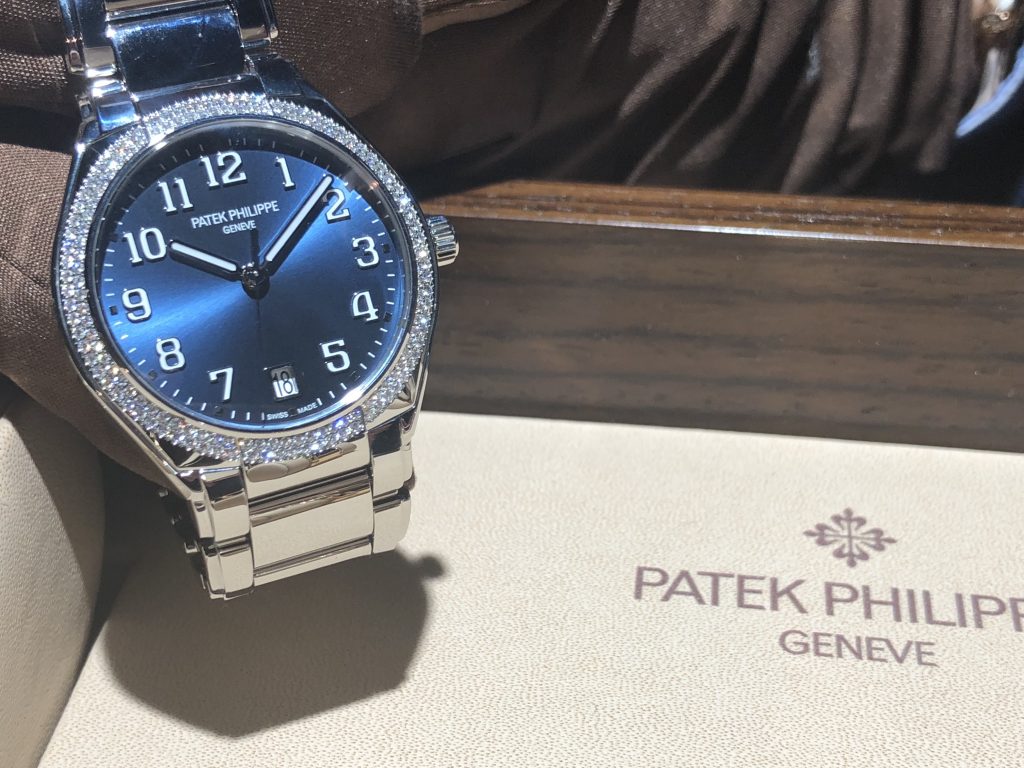 The first Twenty-4, now iconic in its own rights, was unveiled to the world in 1999 as the brand’s first stainless steel and diamond watch with a quartz movement for women. The manchette-shaped timepiece with soft corners fast became a beloved and preferred watch for women, and has remained a staple in the Patek Philippe line ever since. So, without having seen the new Twenty-4 Automatic watch yet, I was feeling a bit underwhelmed. 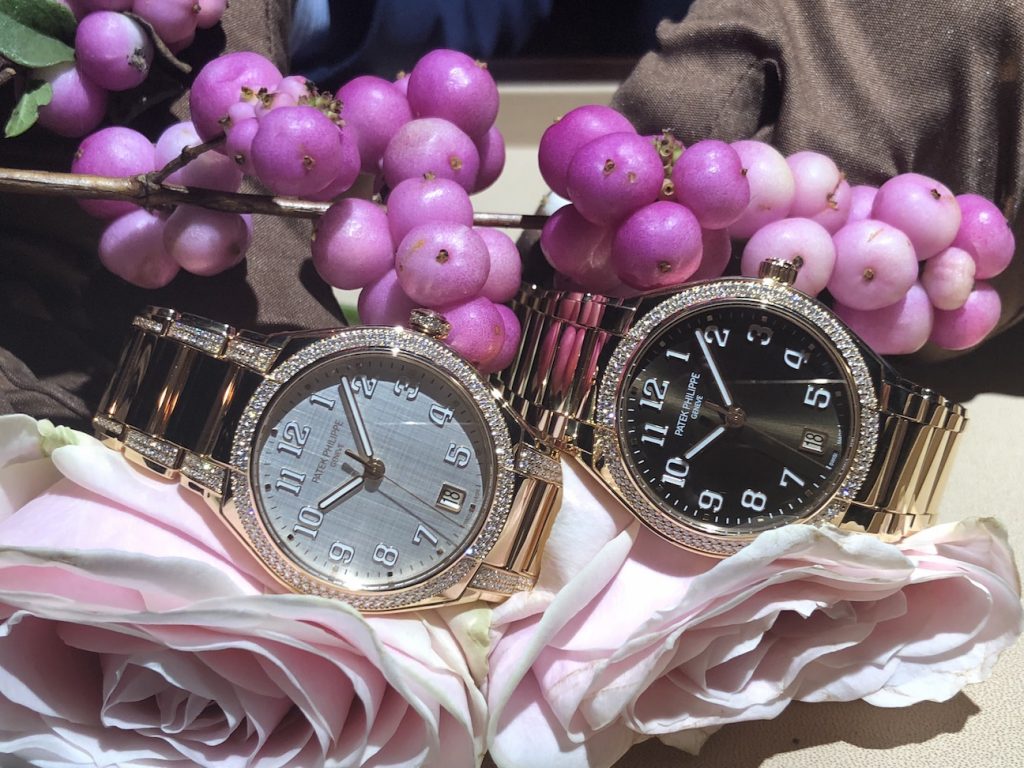 Patek Philippe Twenty-4 Automatic comes in five versions, all 36mm in diameter and set with diamonds.

According to Thierry Stern

When Thierry Stern, president of Patek Philippe, stood on stage at the gala event, he said that it was time for the brand to create a women’s automatic watch, noting that women today want mechanical watches. He said he and his wife Sandrine – also creative head for the brand – worked for nearly five years to find the best possible design of case, bezel, bracelet and overall architecture. In fact, he admitted to throwing away 40 or more prototypes over the course of the five years. 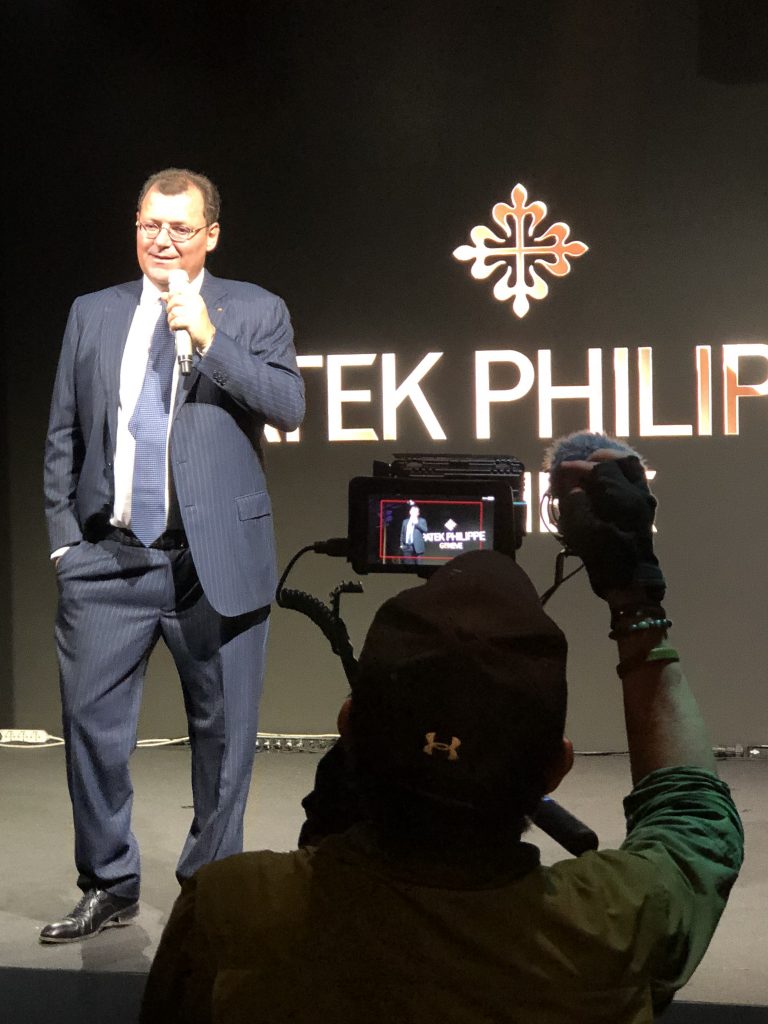 Thierry Stern, President, Patek Philippe at the launch of the Twenty-4 Automatic in Milan.

He also said that he did not need to make a new movement for this watch – he only had to work on restructuring and re-sizing one of the brand’s most precise self-winding movements, the caliber 324S C.

“We wanted a unique look and every time we got close we would throw away the prototype and start again, saying ‘No, we need something better.’ Now, thanks to Sandrine, and to me, because I had to work with her on this, we have one of the most accurate calibers inside a women’s watch that is not a gimmick, not a men’s watch, but a sophisticated watch for ladies today,” said Stern. 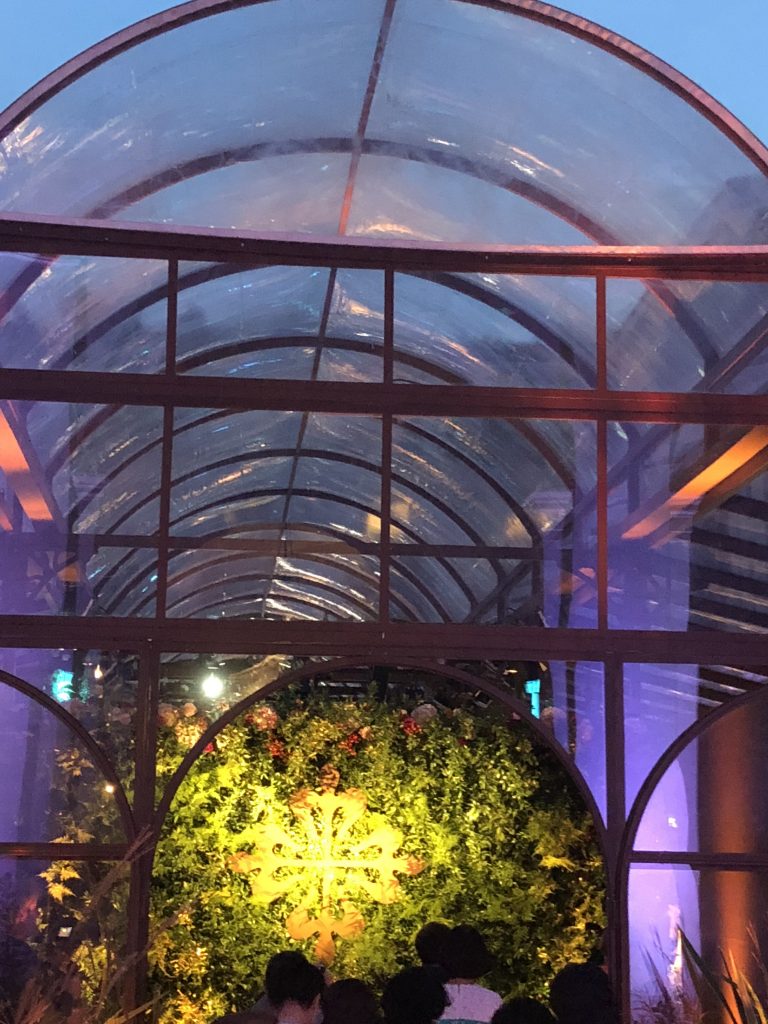 For the launch of the Patek Philippe Twenty-4 Automatic, the brand created a greenhouse structure, complete with flowers everywhere, an exhibition of vintage women’s watches and a center stage decorated with wedding and cocktail dresses.

His speech was light-hearted and honest, he admitted that not being a woman (“yet” he said), he was not able to dream of a woman’s watch, but together with his team they were able to develop what they feel is perfect. “Not everyone will agree with the design, but I am proud,” said Stern.

The Design of the Patek Philippe Twenty-4 Automatic Watches

Ok, so I still hadn’t seen or touched the new Twenty-4 Automatic watches. I was still thinking why all the hype about another rectangular Twenty-4 with a re-worked mechanical caliber. However, minutes later when the watches miraculously appeared on tables filled with flowers – I understood why the watches were so different. 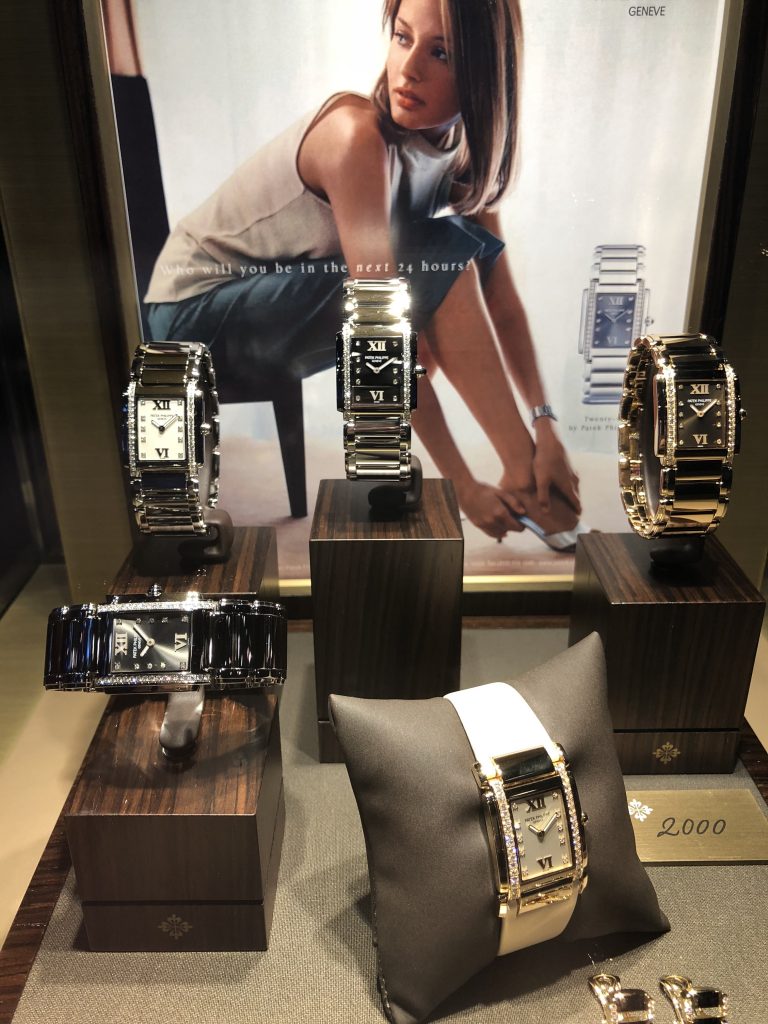 The original Twenty-4 watches are rectangular, and were on display at the launch event.

Five models comprise the initial unveiling – all housing the same self-winding Caliber 324S C with hours, minutes, sweep seconds and date indication. There are two polished stainless steel models and two 18-karat rose gold models – all with link bracelets and patented new clasp. Dial colors include gray/black gradient and rich midnight blue on the steel versions, and chocolate brown or silver linen-like motif for the gold versions. There is also an18-karat rose gold version that, in addition to having the diamonds on the bezel, has two rows of lace-like set diamonds on the lugs and the outer links of the bracelet.

Water resistant to 30 meters, all of the Twenty-4 Automatic watches feature a sapphire caseback to allow for viewing of the 217-part movement. They are equipped with 35 to 45 hours of power reserve and have the brand’s proprietary Spiromax balance spring made in Silinvar. Ranging in retail price from $26,083 for stainless steel to $45,361 for the rose gold versions (and $56,702 for the more intensely set diamond model), the watches all carry the Patek Philippe Seal –attesting to their haute horlogerie craftsmanship. 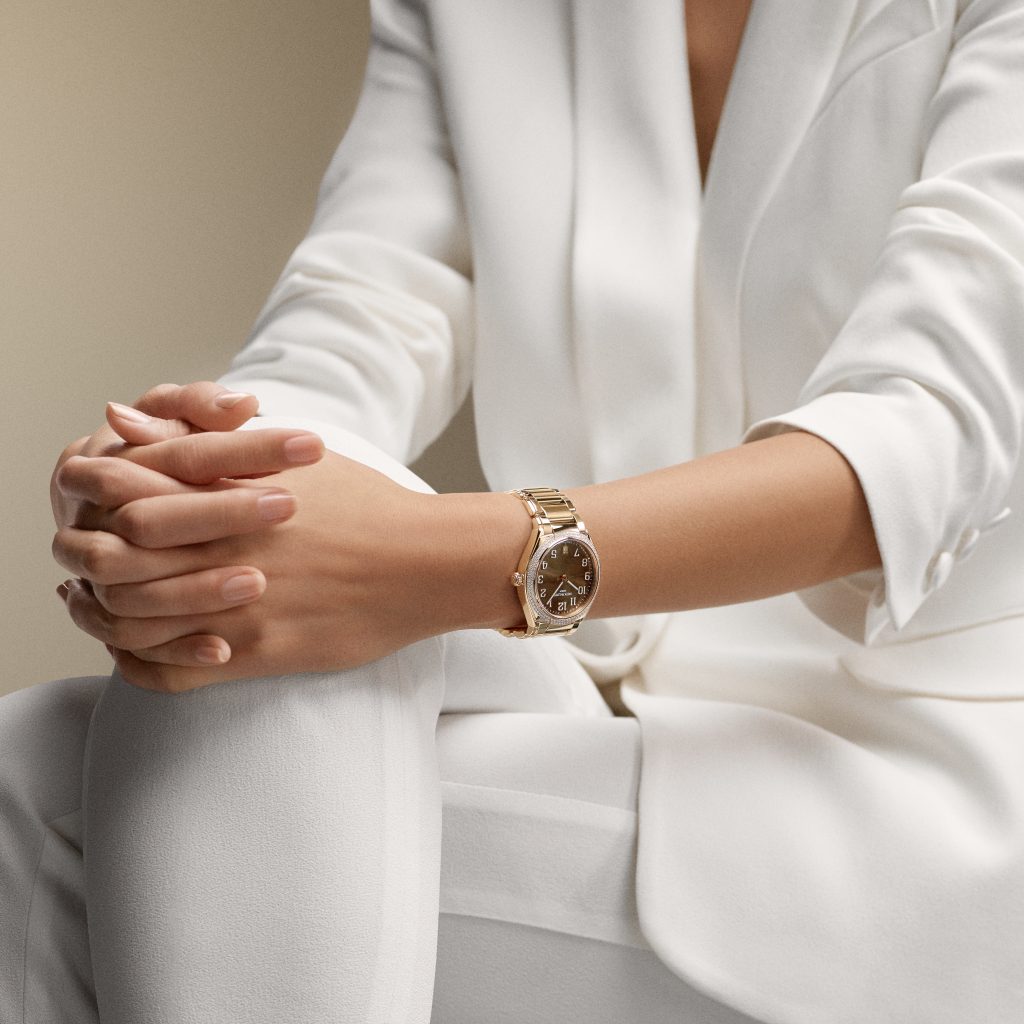 My Impressions of the Patek Philippe Twenty-4 Automatic Watches

So describing the watch from a personal perspective is where it gets complicated. The watches have a decidedly modern twist to them thanks to the bold applied Arabic numerals and the SuperLuminova-coated hands. The clean dials offer a crisp, minimalist look compared to many of the brand’s complicated watches.

The size of the watch at 36mm is just about the smallest I would want or would wear, but then many women today want a little smaller size on the wrist. Being round, the watch is highly wearable, which also makes this new collection highly saleable. 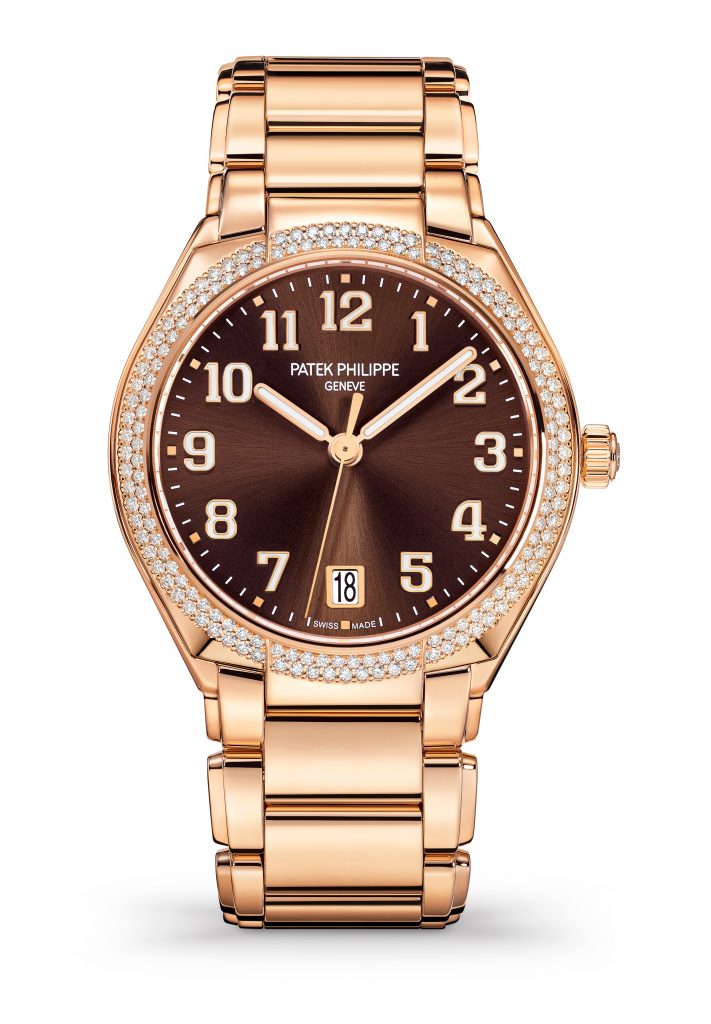 Each watch has a nice feel to it, with just the right amount of weightiness thanks to the beautifully integrated bracelet. The movement is exceptional and being able to view the gold finely finished (Cotes de Genève) rotor via the transparent caseback is a definite plus.

While the chocolate dial, gray/black dial and blue gradient dial are all alluring, the watch with the most flair is the gold version with the horizontal and vertical silver motif that emulates a linen look. The dial offers depth, appeal and a feminine nod to fashion and style. I wish Patek Philippe had unveiled more dials with motifs such as this, but then maybe that is on hold for the second generation of Patek Philippe Twenty-4 Automatic watches that will most likely make an appearance at Baselworld 2019. 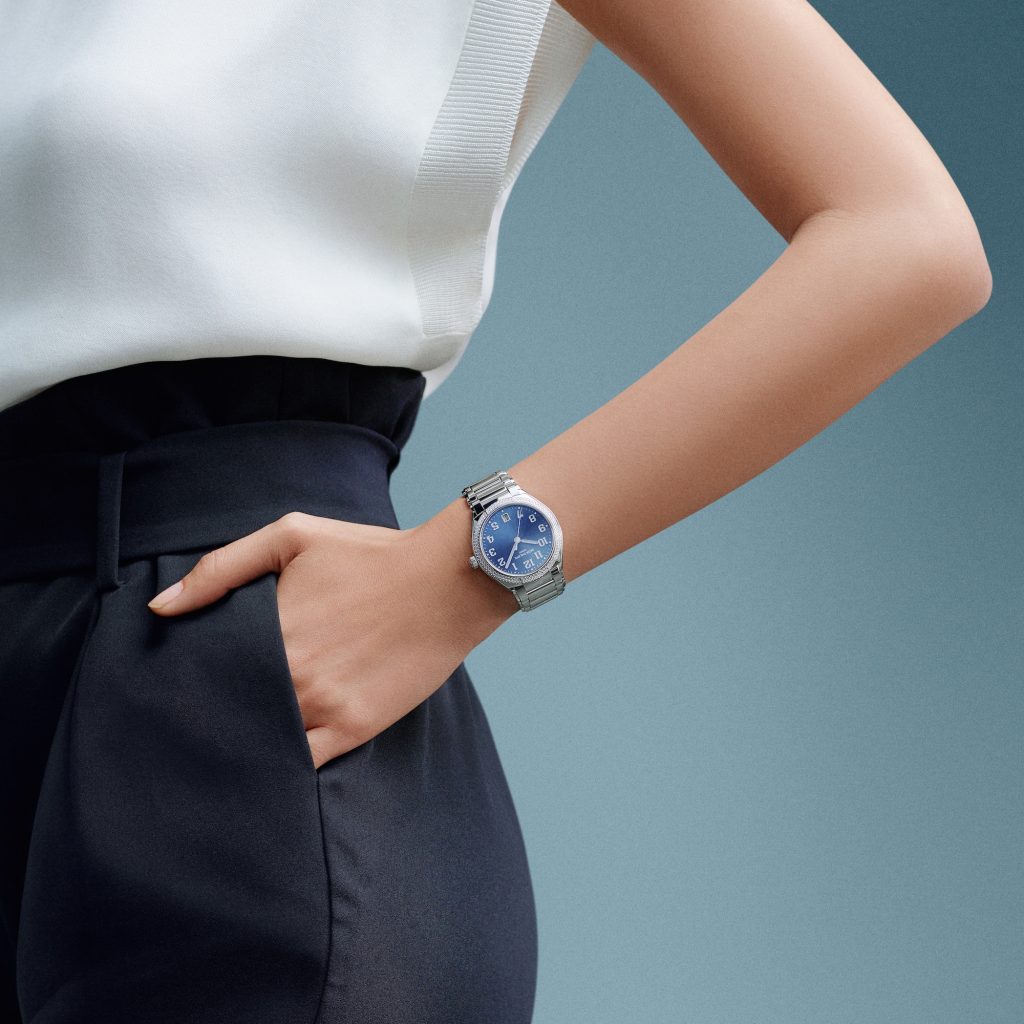 My only real disappointment is in the name. I understand wanting to play off of the success of the Twenty-4 collection, but this watch – with round case shape and automatic movement – is so deserving of a new name. I would have been thrilled to have it named Twenty-6 or even Twenty-8 – both of those Arabic numerals have a much more curvaceous look to them indicative of the feminine focus for this watch. And the “8” could have been a reference to the year of the line’s introduction, 2018.

What I do like about the collection is the fact that it is launched with its own special print and digital advertising campaign with an all-new tag line: “Begin your own tradition.”  With this new watch, women can begin a relationship with Patek Philippe that is a fresh take on classic and contemporary. 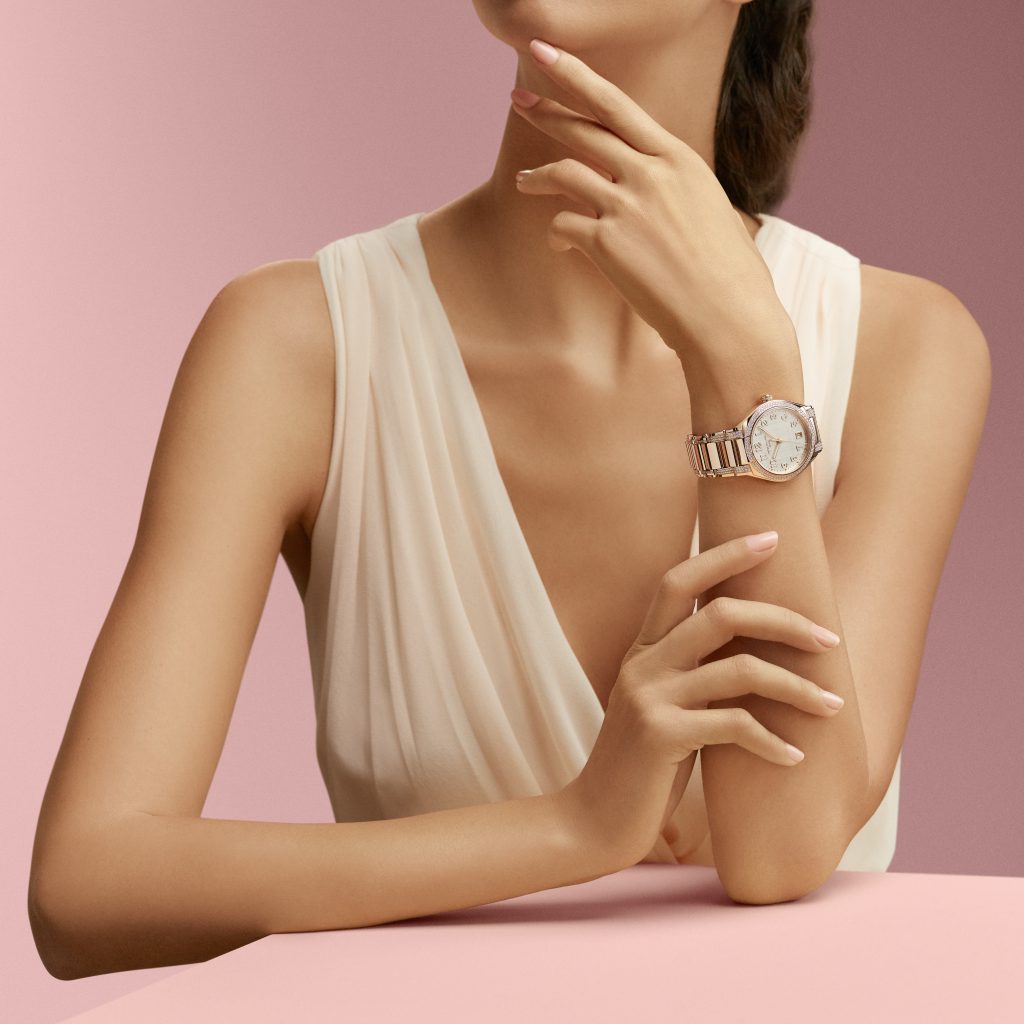 The Patek Philippe Twenty-4 Automatic round watch is offered in five versions initially.