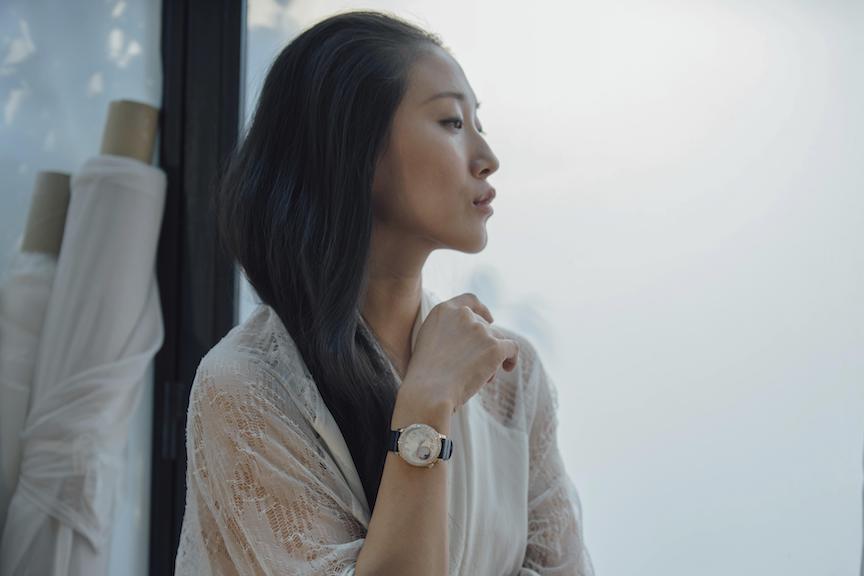 Yiqing Yin Joins Vacheron Constantin’s “One of Not Many” campaign.

Move over men, this one is for the women. However, if you’re interested in what the world’s oldest continually operating watch brand, Vacheron Constantin, is doing these days with its “One of Not Many” campaign, read on.  Today, the brand announced that it has brought its first woman into the fold of its unusual marketing and communications program that was launched in 2018. The 35-year-old Chinese designer Yiqing Yin becomes the face behind the brand’s recently released Egerie collection— created especially for women. The line, unveiled earlier this year, has a stunning pleated effect on the dials — a nice pairing with this haute couture designer.

While she was born in Beijing, Yin has traveled the world and her couture vision reflects that global background. She views clothing as a second skin and regularly turns to pleats to create vibrant fabric structures that offer smooth, flowing lines.  Her attention to detail and fine craftsmanship, much like Vacheron Constantin, drew the two together. 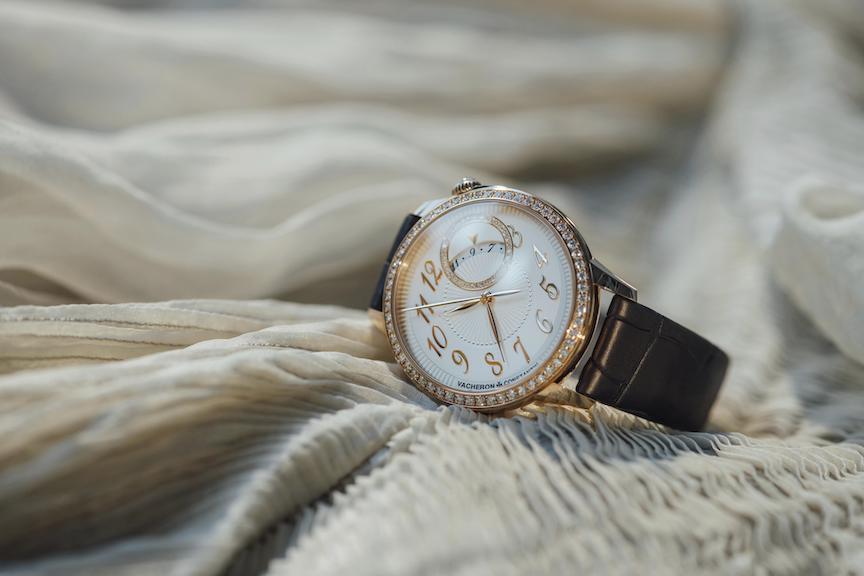 Vacheron Constantin self-winding Egerie collection was launched earlier this year. Yiqing Yin will be the face of the new collection, which features pleated dials that are in line with her pleated haute couture style.

About Vacheron Constantin’s  “One of Not Many” campaign

The brand’s “One of not many” campaign is about showcasing exceptional personalities, people who do things not many others do, and who work tirelessly in their pursuit of excellence. To launch its campaign — not even two years ago —  Vacheron Constantin unveiled its relationship with Abbey Road Studios. At a lavish affair in London, it unveiled both its Fifty-Six Tourbillon, the partnership with the legendary studio and the campaign. I was thrilled to be a part of this incredible event.  Among the initial ambassadors for the campaign was Cory Richards, an explorer and mountain climber who has climbed Everest, survived an avalanche (and worked to create a movie about it), and is a motivational speaker. I have had the opportunity to interview him on several occasions, and he is truly a genuine and intriguing individual. 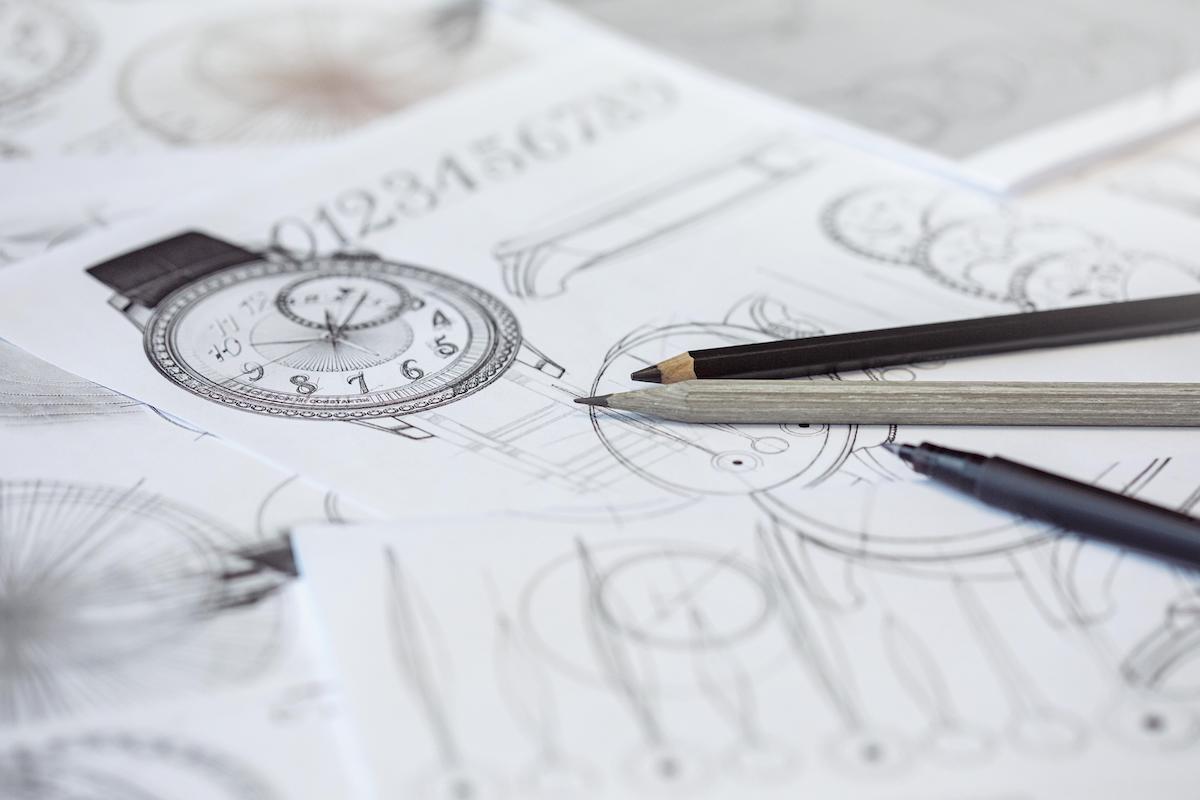 Sketching of the Vacheron Constantin Egerie

“A graduate of ENSAD (École Nationale Supérieure des Arts Décoratifs de Paris), Yiqing Yin was awarded the Grand Prix de la Création de la Ville de Paris in 2009. Following the Hyères International Fashion Festival in 2010, her dreamy creations were staged in the windows of the Ministry of Culture, at the Chaillot National Theatre and then at the prestigious Joyce Gallery. In June 2011, she won the ANDAM (Association Nationale pour le Développement des Arts de la Mode/ANDAM Fashion Award Paris) and held her first runway showing during the Haute Couture Paris Fashion Week. That same year, Yiqing Yin was one of eight young “designers to watch” selected by the French edition of Vogue. In 2013, Maison Léonard appointed the young designer to head its ready-to-wear collections. Yiqing Yin also works with prestigious brands such as Cartier, Guerlain, Hermès, Swarovski and Lancôme. She also explores other artistic worlds. In 2013, at the invitation of the Venice Biennale, she created the artwork In-Between. For her Blooming Ashes collection, she combined fabric with light in the Stellar dress, in collaboration with sculptor Bastien Carré. She has also worked in the world of dance by designing the stage costumes of the étoile ballet dancers Dorothée Gilbert and Mathieu Ganio for Tristan and Iseult, directed by Giorgio Mancini.She is currently working on a film project that will be released this year.”

The new Vacheron Constantin ads for the Egerie collection feature a unique headline: “Let time fly. You might get to an exceptional place.” How true that is. The ads feature Yin and her couture clothing, and will be seen in print and online in the coming months. 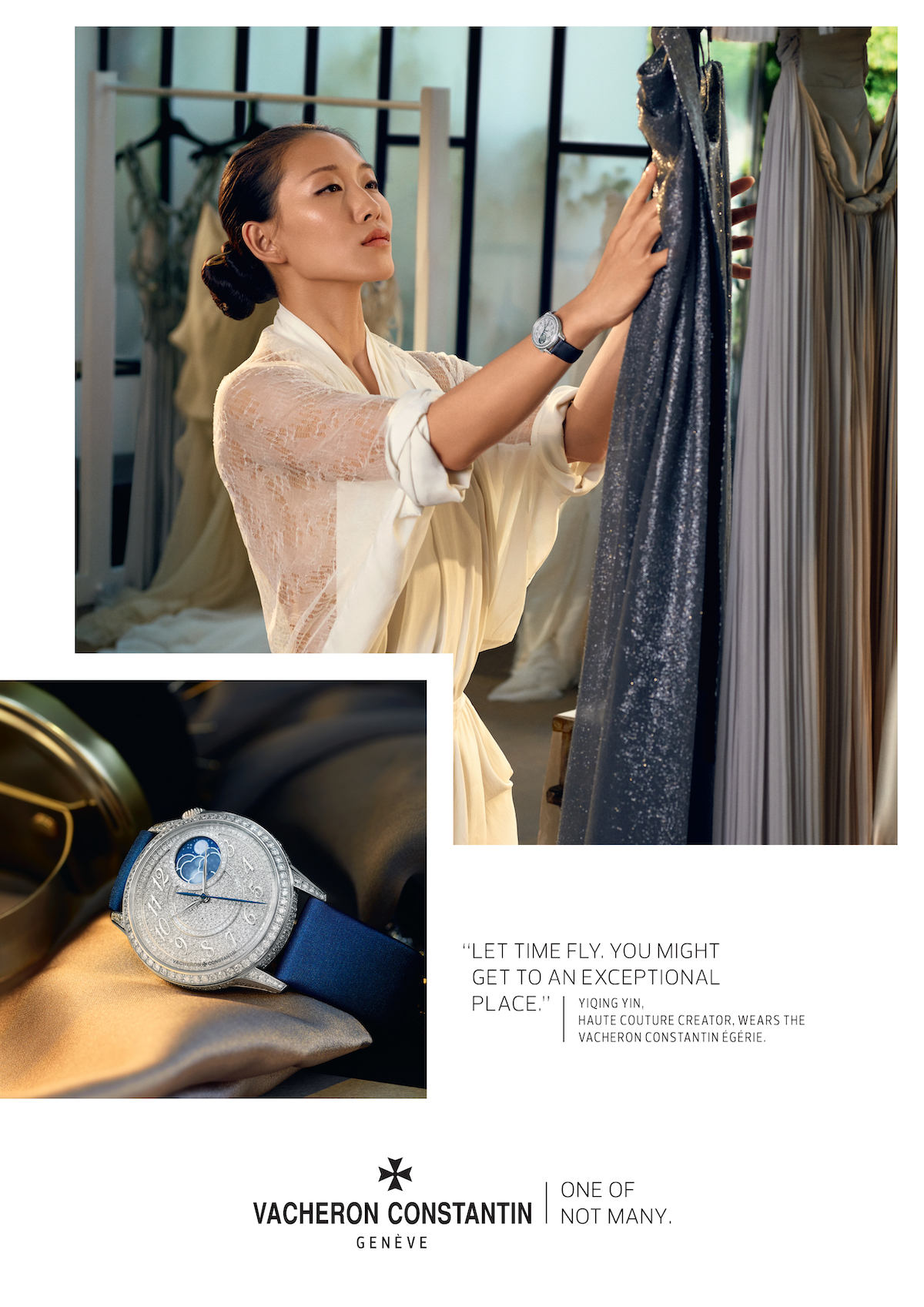 Vacheron Constantin’s new “One of Not Many” ad, featuring couture designer Yiqing Yin.