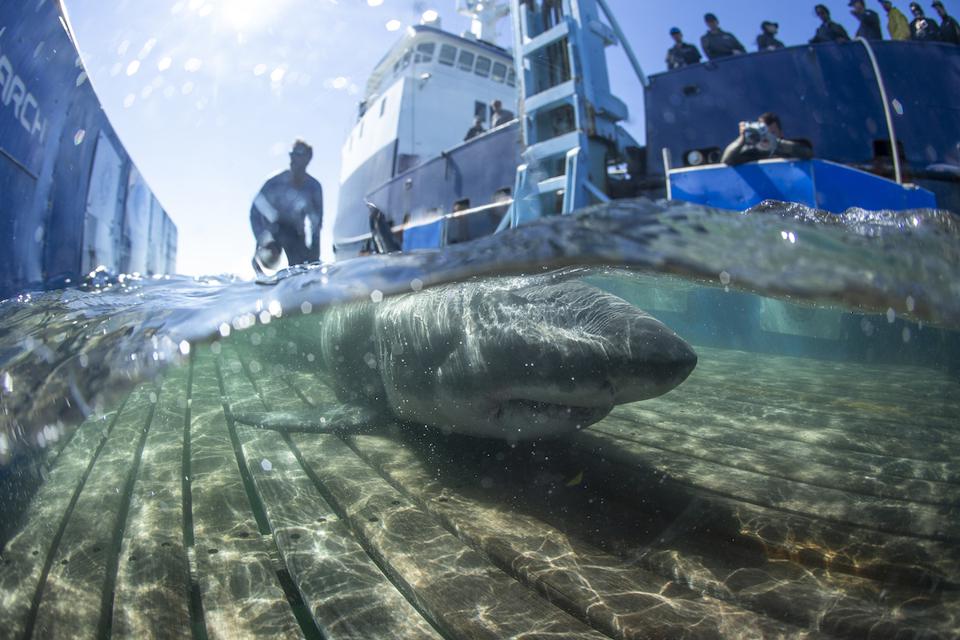 Just a few days ago, a special team of shark researchers and scientists left the waters off of Cape Cod, MA, and headed out to the greater Atlantic Ocean on a two-week expedition to study sharks in their own environment. The expedition, led by Ocearch and supported by Swiss watch brand, Ulysse Nardin, aims to capture, study and release marine life – predominantly great white sharks – while staying in their own habitats. This particular expedition is part of an on-going study aimed toward saving the planet’s shark population. With the shark as its mascot in many of its advertising campaigns, this subject is near and dear to the hearts of the executives at Ulysse Nardin.

UPDATE: Ulysse Nardin has created a new video about the experiences and the expedition. It takes about 12 minutes to watch and is well worth the time.

The objective of the non-profit research organization, Ocearch, is to safely take samples from the sharks it captures in their waters and to tag them in order to study the benefits they bring to us, and to learn more about their migration patterns. The information collected on the expeditions is studied for its medical values and other potentials and is shared with collaborating institutions.

Swiss watch brand Ulysse Nardin likes to do things differently. This brand, which has a long history of creating marine chronometers and dive watches, uses the shark in its advertising and marketing campaigns. In fact, the shark can be seen swimming around the tops of skyscrapers in the streets of New York city. 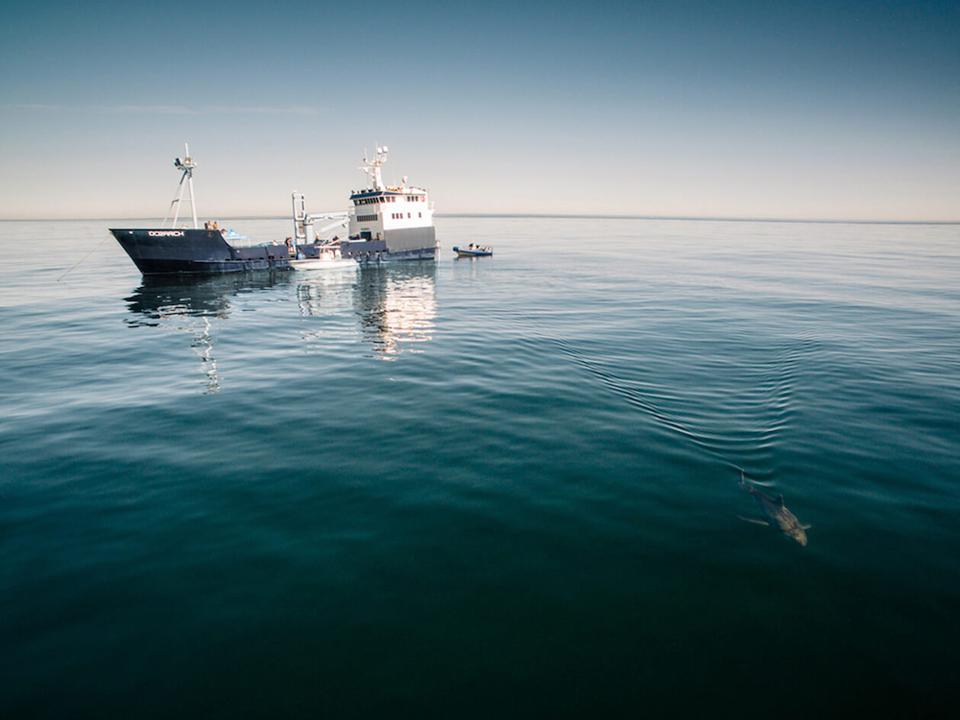 The Ocearch expeditions mark the first time that researchers and scientists can study sharks in their own habitat.

It was less than two years ago to become President of Ulysse Nardin USA, Francois-Xavier Hotier says he knew he wanted to strengthen the brand’s relationship with ocean research. He was intrigued by the work Ocearch is doing to promote fearless awareness of sharks and their necessity in keeping the oceans balanced, and by the powerful studies they produced.

“The seas are our territory and I wanted to improve our presence there,” says Hotier, who has established a program with the non-profit One More Wave organizations that makes surf boards for disabled veterans. “I wanted a partnership with a nonprofit working with sharks in a scientific way. People are biased in their understanding of sharks. We don’t think of them in a scientific way, how they reproduce, what their food diet is at 4,000 feet below sea level, and so much more. We think of them as monsters thanks to movies like Jaws. But just like the monsters or freaks like Dracula, the more you understand them, the more you fall in love with them.”

Hotier says when he met with Ocearch, he was impressed by the innovative ways they developed to catch sharks, study them and then release them again. He read their reports and learned there is some valuable information that could be useful for medical reasons. 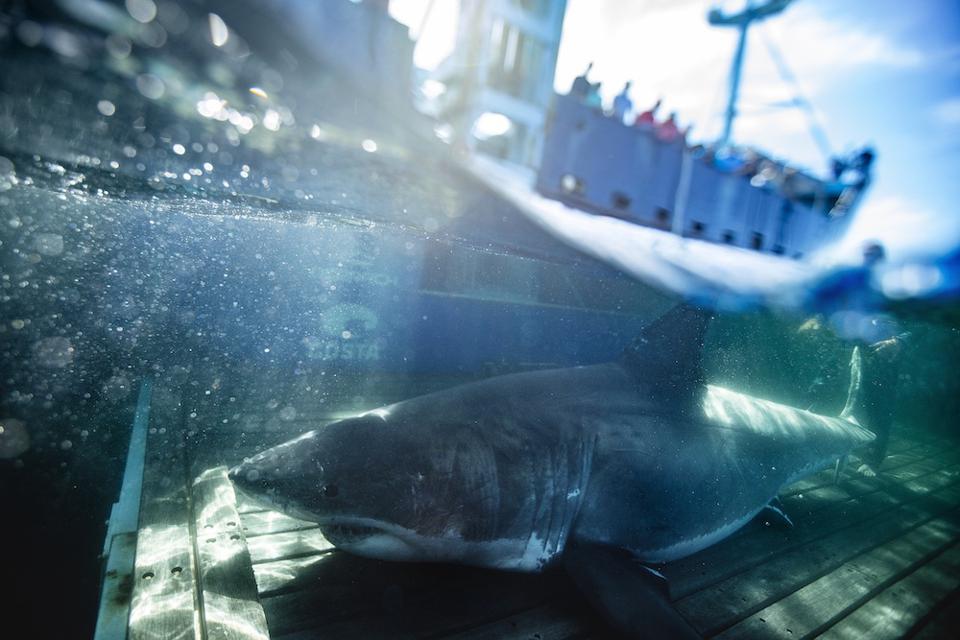 Ocearch catches the sharks and study them on the boat before tagging and releasing them.

“This is the first time that we can take blood samples of live shark, or work on them and then release them, the people at Ocearch are doing these studies for the first time in history – out on a boat,” says Hotier. “When I realized what they are accomplishing, I was blown away. With the shark as our icon, our hero, our job is to ensure they are protected, and gaining a better understanding of them helps. The more you understand the creature and how smart it is, how it plays a role in the ocean environment, the more you respect this amazing animal. By partnering with Ocearch to raise awareness of their work, we feel we are involved in shark protection.”

Following the expedition out of Boston, Ocearch will make a second scientific venture this year, from September 3 to 28, in Nova Scotia. This Ocearch relationship is not the first study of sharks that Ulysse Nardin has supported. In fact, not too long ago it offered support to tag and study blue sharks in the North Atlantic Ocean nearby the Azores. 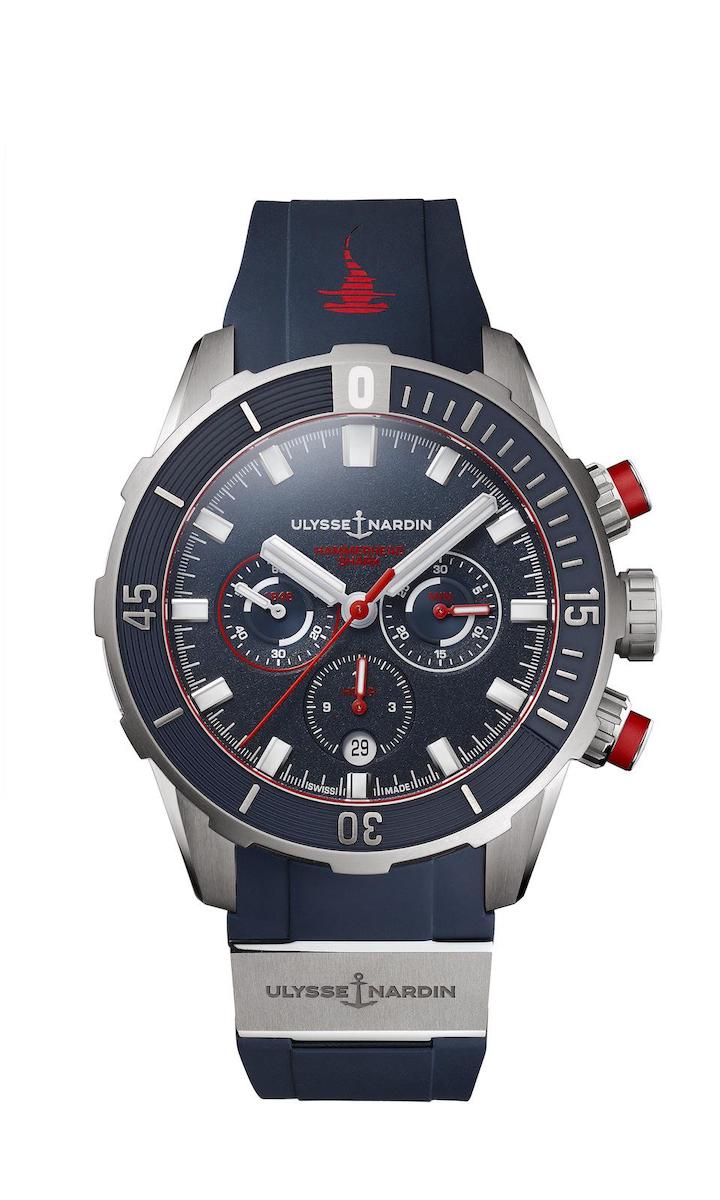 Because of its close ties to the world’s oceans, Ulysse Nardin has created watches that pay homage to the shark. The most recent pieces are two limited edition watches:   Diver Chronograph Hammerhead Shark and Lady Diver Great White.

The Diver Chronograph Hammerhead Shark 44mm watch pays tribute to the Hammerhead predator that uses its head-shape to scan for prey.  The watch has the shark engraved on the case back and on the rubber strap versions there is a shark sculpted into the strap where it meets 12:00 on the dial. This watch is powered by a Ulysse Nardin automatic movement with high-tech silicium escapement.

The Lady Diver Great White Limited Edition watch is a 39mm piece made in an edition of 300, just like the Diver Chronograph Hammerhead Shark watch. It features an unusual dial treatment that resembles the granular skin of a great white. 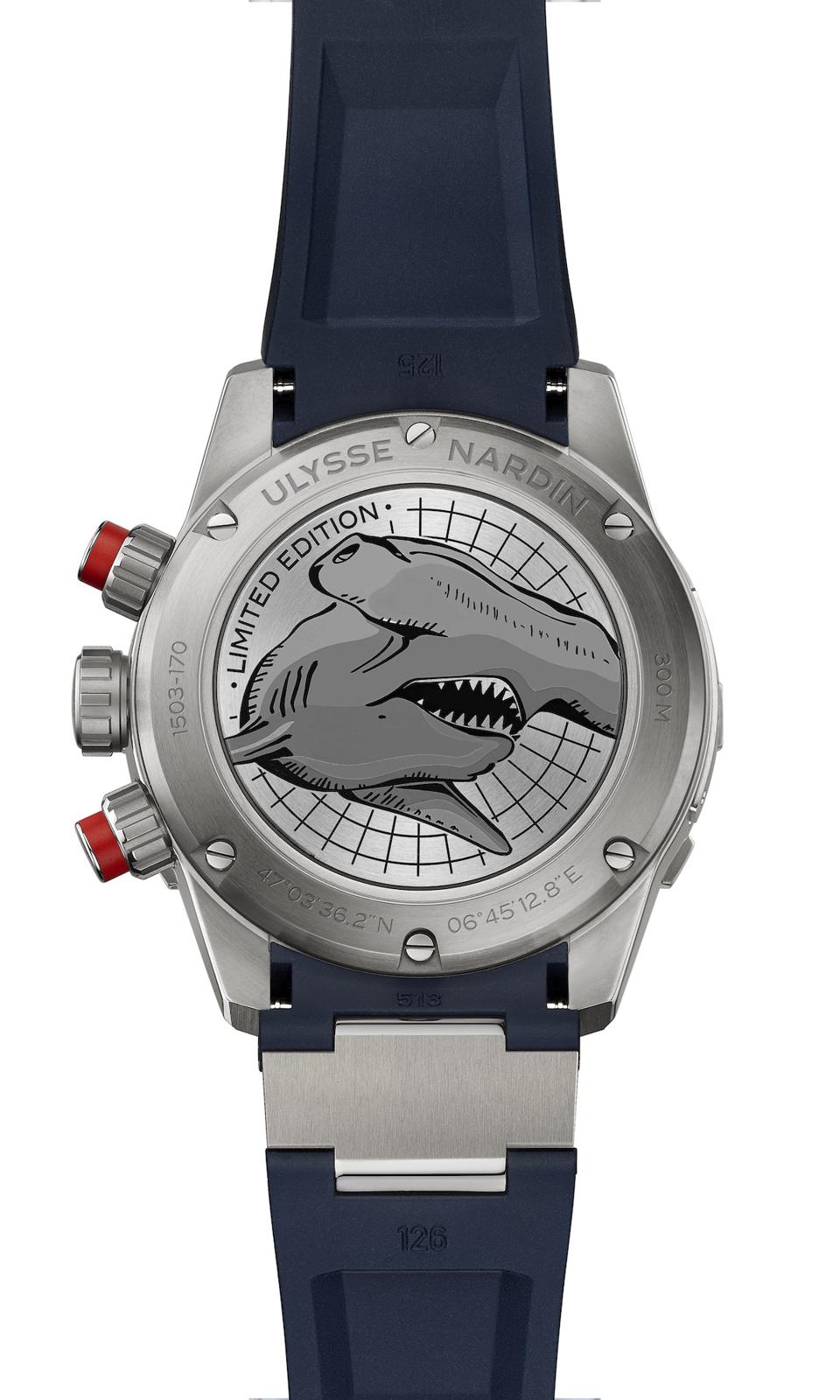 The back of the Ulysse Nardin Diver Chronograph Hammerhead Shark