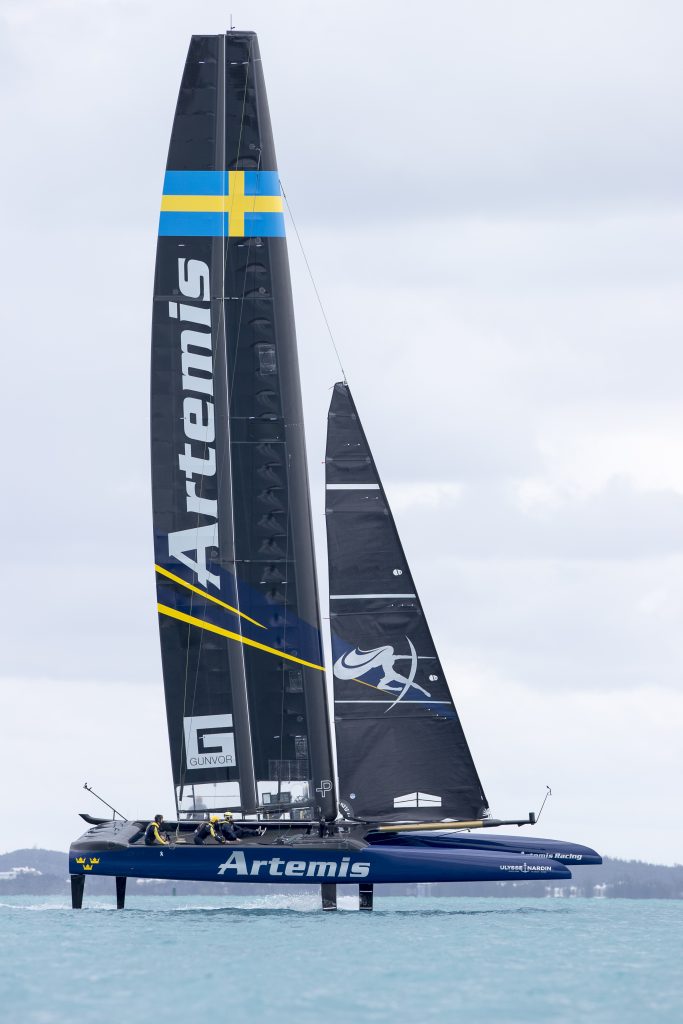 We have been bringing regular updates of the 35th America’s Cup races taking place in Bermuda now, and of the watch brands affiliated with it.  Today, we continue that coverage as the qualifiers conclude this weekend and the Challenger Playoffs begin next week. Ulysse Nardin sails into place with a new regatta watch and as the Official Partner of Artemis Racing Team in the 35th America’s Cup presented by Louis Vuitton races.

Defending the competition for the oldest trophy in international sports (dating back to 1851) is America’s Oracle Team USA (which won the 2013 America’s Cup races and the 2010 series before that). Leading up to the final races to determine the ultimate winner, five challengers (including Artemis)  will race one another over the course of this month to determine the final challenging team that will come up against the defenders.

As if the concept of racing in the world’s oldest trophy sport in international sporting event is not exciting enough, the boats being built and raced for this year’s event are spectacular in size and technology. The incredible foiling wing-sailed catamarans being raced in the turquoise waters are capable of speeds of between 50 and 100 km/hour, depending on the design and class of the boat, and have magnificent foiling abilities that enables them to rise out of the water and seemingly glide in the sky across the ocean. 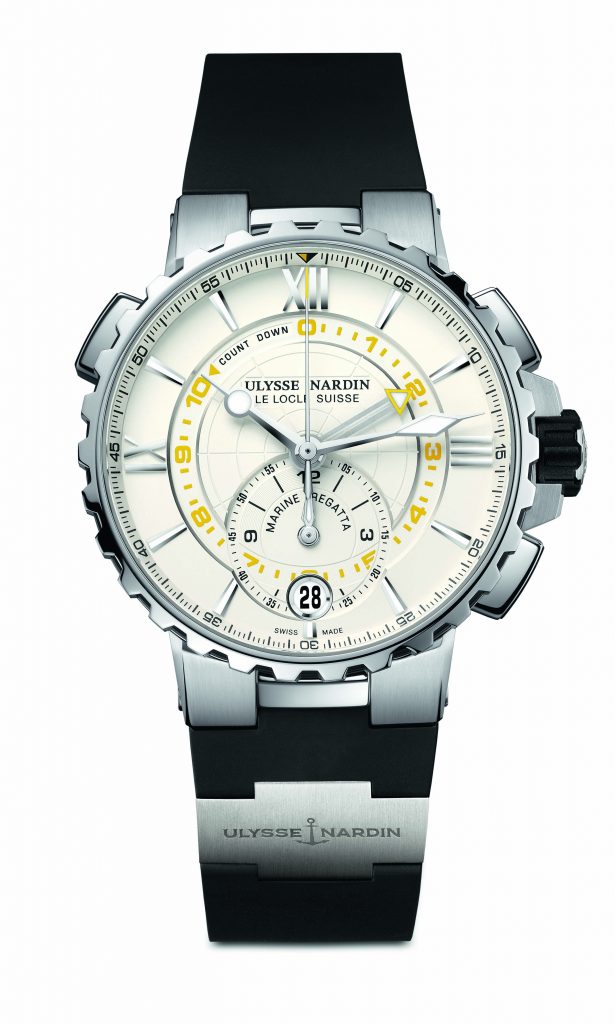 Keeping pace with all the precision of the races, Ulysse Nardin  plays a key role as the Official Partner of  Artemis Racing Team, the Swedish team that recently launched its new race yacht, Magic Blue, which was three years in the design and development stages. In addition to equipping the crew with Ulysse Nardin watches, the brand has gone over and above in the creation of timepieces to honor the team and the America’s Cup races.

A brand right in its element on the water thanks to a rich history in marine watches that dates back to 1846, Ulysse Nardin unveils several important water-related watches. Top among them is the highly technical patented Marine Regatta watch. The revolutionary timepiece  is not only equipped with a sweep countdown timer that can be set from 1 to 10 minutes for the crucial countdown to the start of the race, but also is equipped with an innovative bi-directional seconds hand that immediately following the conclusion of the countdown automatically starts moving in a clockwise direction and begins timing the race.

As with any regatta chronograph, its reason for being is not only to track racing time but, more importantly, to count down the critical minutes before the racers cross the starting line. This the timeframe wherein the competitors strategically position themselves on the startling line – based on winds and the positions of one another.  But somehow as soon as the race begins it is difficult to think to reset the watch to start timing the race. With the ground-breaking Ulysse Nardin Marine Regatta watch, that timing happens automatically.  The Regatta chronograph was developed with the expert advice of famed yachtsmen Loïck Peyron and Ian Percy, both brand ambassadors and members of the Artemis Racing team. 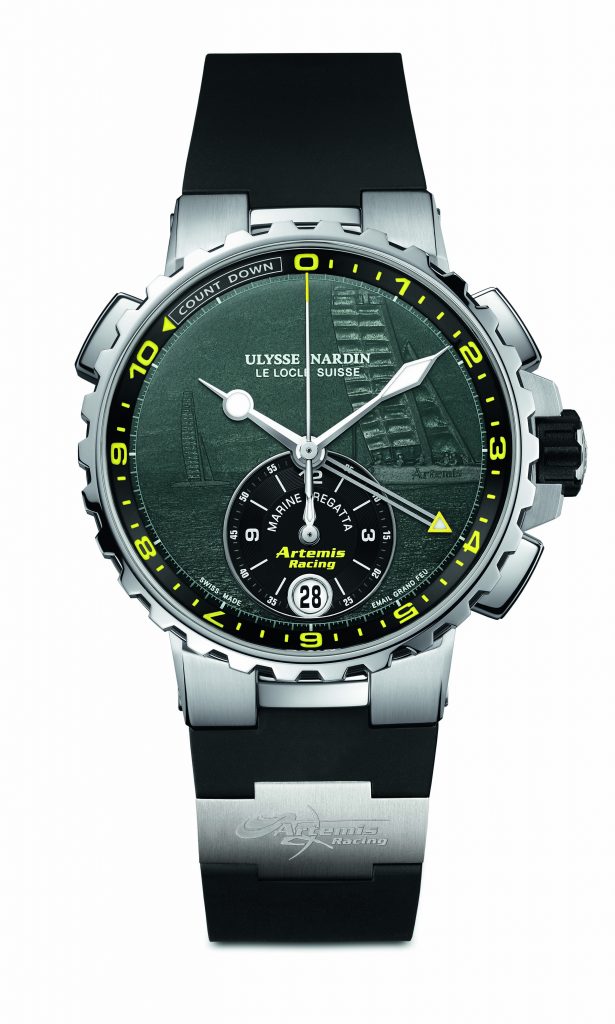 The Ulysse Nardin Marine Regatta watch is revolutionary in that it times the countdown before the race and automatically swings into timing of the race itself.

The regatta feature of the watch is located at the center of the dial, and displays the countdown with an arrow pointing at the yellow minute scale from 0 to 10. It is set with a pusher at 10:00 and moves counterclockwise for the count-down. When the countdown reaches zero, which signals the start of the race, the seconds hand instantly starts moving in the clockwise direction to time the race. That timing is displayed via an hours and minutes subdial at 6:00.

The Ulysse Nardin Regatta Chronograph, crafted in stainless steel, houses the incredibly complex in-house-made movement, UN-155, with  650 components. The sophisticated mechanism has an inverter that enables the central seconds hand to turn in either direction. The intricate mechanics are based on the manufacture chronograph caliber UN-153, and brought to new levels.

Measuring a sturdy  44mm diameter, the steel case is water-resistant to 100 meters, and features a fluted bezel with rubber inserts, a screw- down crown and two molded rubber pushers. Two different dial variations are offered, but both feature a yellow countdown register with sweep hand, Arabic numerals, indexes, appliqué Roman numerals and luminescent hands.  There is also a limited edition of 35 pieces with a black enamel dial made in tribute to Artemis Racing for the 35th America’s Cup. 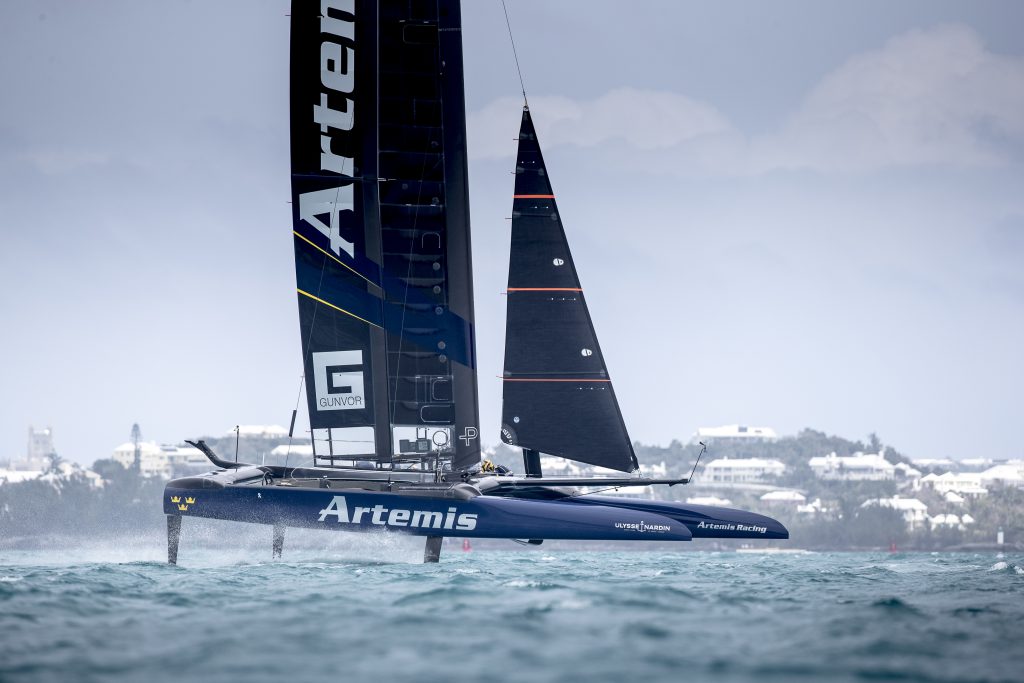 Regatta functions :
– countdown timer that can be set from 1 to 10 minutes, and with an inverter mechanism of the second and release of the running time

Seconds hand that can be stopped to adjust the hour