To Peru and Back: A Review of the Jaeger-LeCoultre Master Compressor Chronograph 2 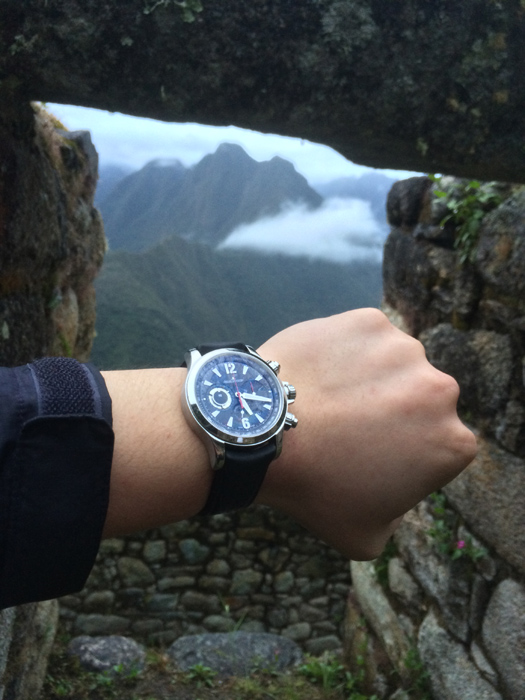 If you were to hit the trails in Peru – which I did — what watch would you take with you? Perhaps this is a somewhat inane question, but it was one that I contemplated before my trip to hike the Inca Trail. The wristwatch, first and foremost, was developed as a tool. The mechanical wristwatch as we know it today, despite all technological advances is less accurate and functional than its quartz and digital successors. And while there are some very good modern mechanical tool watches, even these more practical timepieces cannot approach the functionality and electronic accuracy of their counterparts. That said, it is interesting to recall that many of the great classic watches we revere today began as purpose-driven tool watches that enabled the great explorers and visionaries of years past to attain their achievements. For this very reason, we opted to eschew the plethora of quartz and digital watches on the market, and take, instead, the mechanical Jaeger-LeCoultre Master Compressor Chronograph 2. 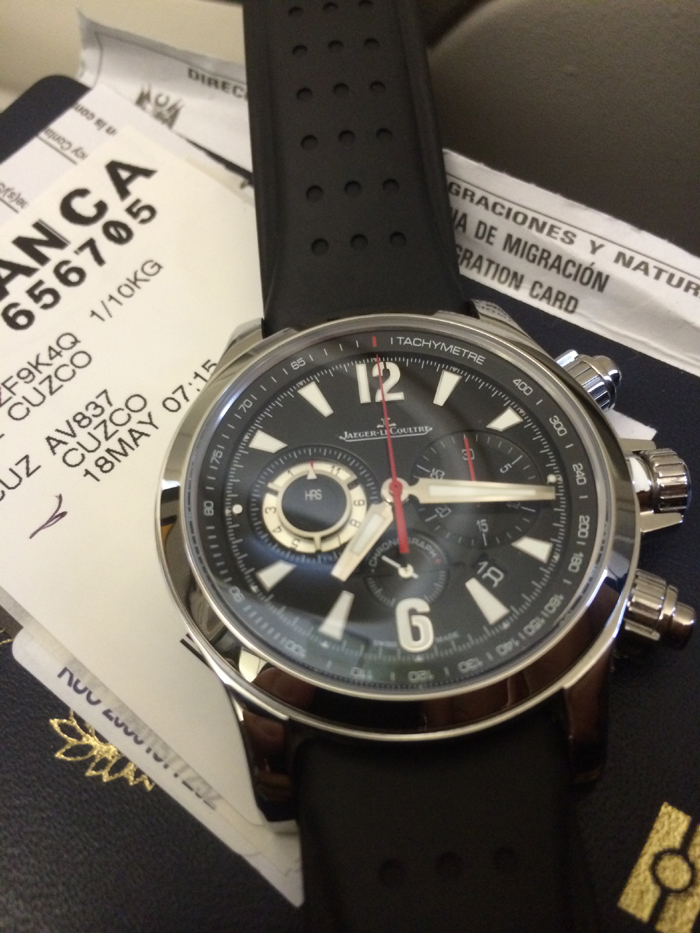 On flight to Cusco

Known for building many an iconic timepiece, Jaeger-LeCoultre is commonly held in the highest regard for its long history, achievements in building complicated wristwatches, and for designing all of its movements in-house. The Reverso, Polaris, Geophysic, and others are prime examples of the iconic timepieces from the brand, and while these pieces were all produced with a functional purpose in mind, they are not exactly the first watch one would reach for when climbing a mountain. Instead, the Master Compressor and Extreme series of watches are meant to be taken into tough environments such as the Inca Trail in Peru, on the way to UNESCO World Heritage Site Machu Picchu. 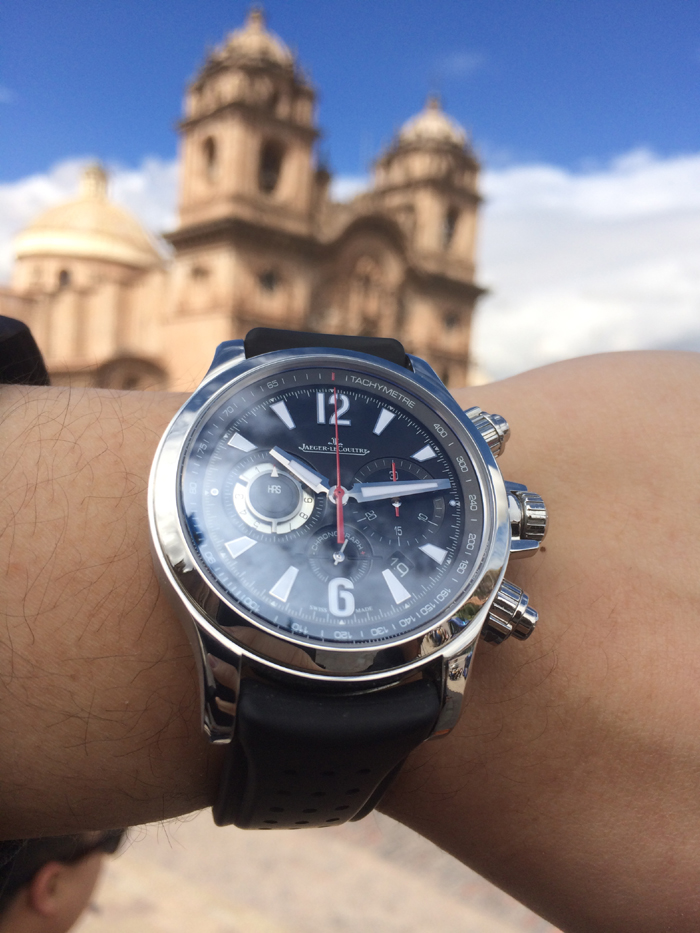 Sitting at 41.5mm in a tall-ish, highly polished steel case, the Master Compressor Chronograph 2 is somewhat of a scratch magnet. It is, however, armed with several technical advantages that endow it with top performance under strenuous circumstances. The plan was that while on the trails in Peru, I would time our treks each day, testing the accuracy and precision of the watch over the course of the four-day hike, during which time we would encounter significant altitude changes, torrential downpours, and rugged impacts as we traversed the rocky terrain of the Andes mountain range.

In a way this is somewhat of a unique review as it begins under the cuff of a dress shirt in Tribeca only to find its way under the sun of the Inca Trail, ascending to Machu Picchu, and then back to the concrete jungle of New York City – making the Master Compressor Chronograph 2, in a way, a more wholly reviewed watch. Our journey began at Newark Airport with a flight to Lima, Peru, followed by yet another flight to Cusco, which sits at over 11,000 feet above sea level. 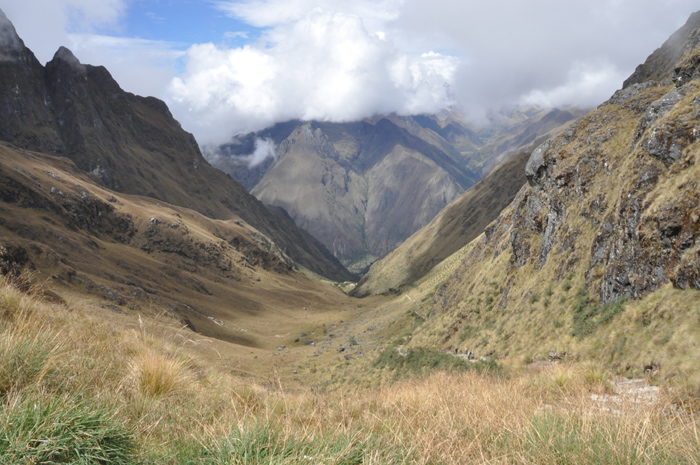 The beginning of the Inca Trail is at Kilometer 82 along the Urubamba River. Our four day trek would take us across the trail the Incan people built, carved right into the sides of the mountains, on the way to their holy site of Machu Picchu. The first day’s hike would be the least strenuous and begin and end at 8,500 feet and 9,800 feet above sea level. While mountainous and rocky, the trail was rather sedate this first day, with only the lightest of drizzles impacting our trek. The final incline to our initial campsite was the under the canopy of towering trees and here the humidity began to cling to our skin and the equipment. That night, with no real lights, the stars painted the sky with brilliant dots of light, more than I can say that I have ever seen. It was also then that I truly learned to appreciate a well-lumed dial along with equally well-lumed large numerals and broad hands of my Master Compressor Chronograph 2. 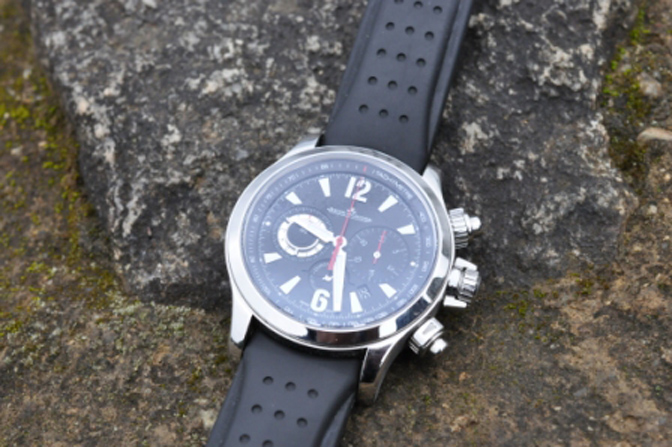 Day two arguably was the most strenuous despite its status as the shortest day of our journey. We set off at 7:30, the air brisk and the sun just beginning to crest over the peaks that surrounded us. We would ascend to the first pass before noon — a climb to nearly 14,000 feet – to reach “Dead Woman’s Pass” or Warmi Wañusqa in the Incan language. Here, the watch would tough out bumps and scrapes against the terrain as we trudged ever forward up the roughly cut rocks that made up the Inca trail. Surprisingly few scratches made their way onto the watch, and the changes in air pressure, while profoundly felt by my lungs, seemed to have no affect whatsoever on the performance of either the timekeeping or chronograph functions. After that, we descended sharply from the top of the pass, knees protesting the uneven drops between the steps on the trail. By two in the afternoon we had arrived at our second campsite nestled in the valley between two mountains. 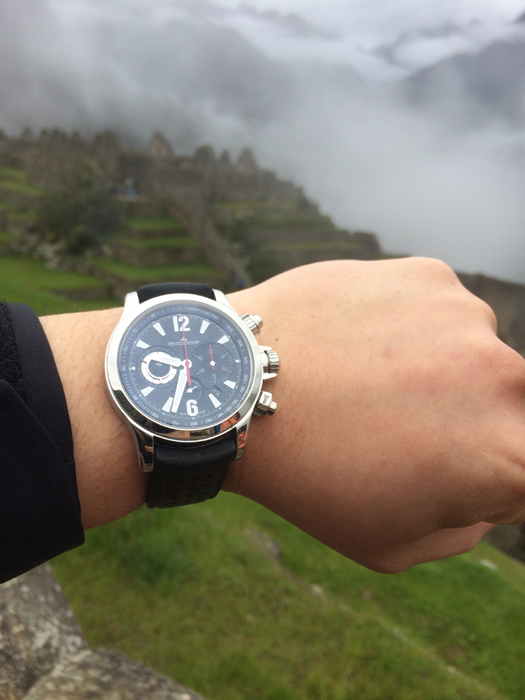 The third day on the trail was a close contender for the toughest day out there. It was made more bearable only by the breathtaking vistas and the Incan sites we would have the opportunity to explore that day. The trek would last over nine hours this day and was compounded by a pouring rain that did not let up for more than an hour until the end of our journey on the fourth day. The rain and fog certainly put a damper on the day and eventually we forewent the site at Phuyupatamarka that sat enshrouded in the unrelenting fog of the rainy day and only saw Runkuraqay and Wiñaywayna. Wiñaywayna, also the name of our last campsite, is a marvel of Incan ingenuity. Tiered and set into the steep mountainside, the site was truly what validated braving the endless rain. As to the Master Compressor Chronograph 2, the watch performed admirably: the screw down protectors for the actuators of the chronograph preventing any moisture or humidity from entering the case. 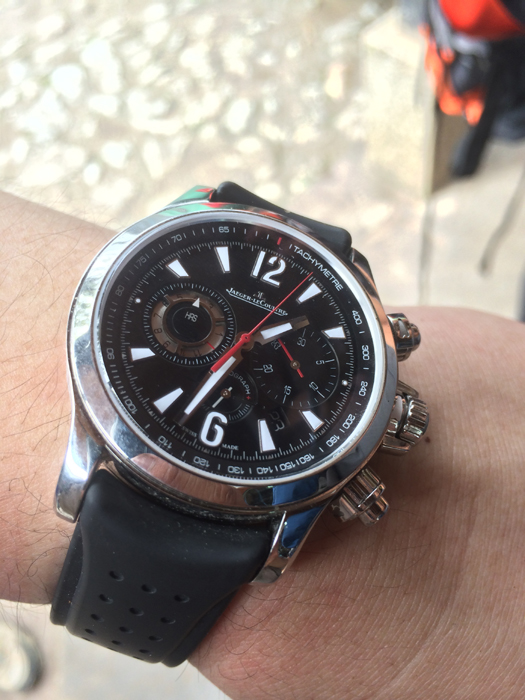 Our final day began at 3:30 in the morning, the sky still an inky black when we awoke. We would wait at the final checkpoint for a timely 5:30 departure for the Sun Gate, which was approximately two hours from Wiñaywayna. The ascent to the Sun Gate would be gradual, only steepening at the very end, but then it would be all downhill to Machu Picchu. However, it was the last 100 or so steps to the Sun Gate that would give us a taste of what was to come when we would attempt our climbing of Huayna Picchu, the neighboring mountain to Machu Picchu. For lack of a better description, the last 100 steps were a cross between a vertical bear crawl and climbing a ladder. The Master Compressor’s strap scraped and grated across the rocks as we climbed, but the rubber and steel held true with almost no blemishes to speak of. We had hoped beyond hope that a glimmering sunrise would greet us at the Sun Gate, but only fog and more of the rain that had dominated the previous day and half of the journey was there to usher us on to Machu Picchu. 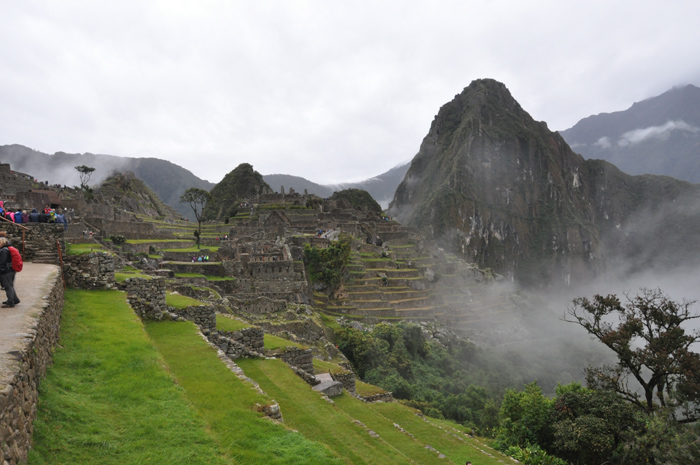 To say Machu Picchu is an engineering marvel would be to do it a disservice. It is entirely cocooned by high peaks on all sides and yet this large city was the site to which Incans deemed worthy would travel to on foot from all directions. The final steps on our journey would be to take an excursion without our guide up to the mountain top of Huayna Picchu to experience the stunning views. The climb here was steep, and if the impression was that the Incans had done a rough job of putting together the impressive Inca Trail, the ascent of Huayna Picchu quickly dispelled that. The trail was slippery and steep, extremely so at times. Steps sometimes were not even steps, and some steps were far too shallow for my far-less-than-Shaq-sized feet. Here the Master Compressor Chronograph 2 was put to the test with light rain, humidity, steel cables, and the terrain bumping, scraping, and colliding with the case. Still it held true, the chronograph kept ticking, and the time was only a couple seconds off by the time we returned to the entrance of Machu Picchu. 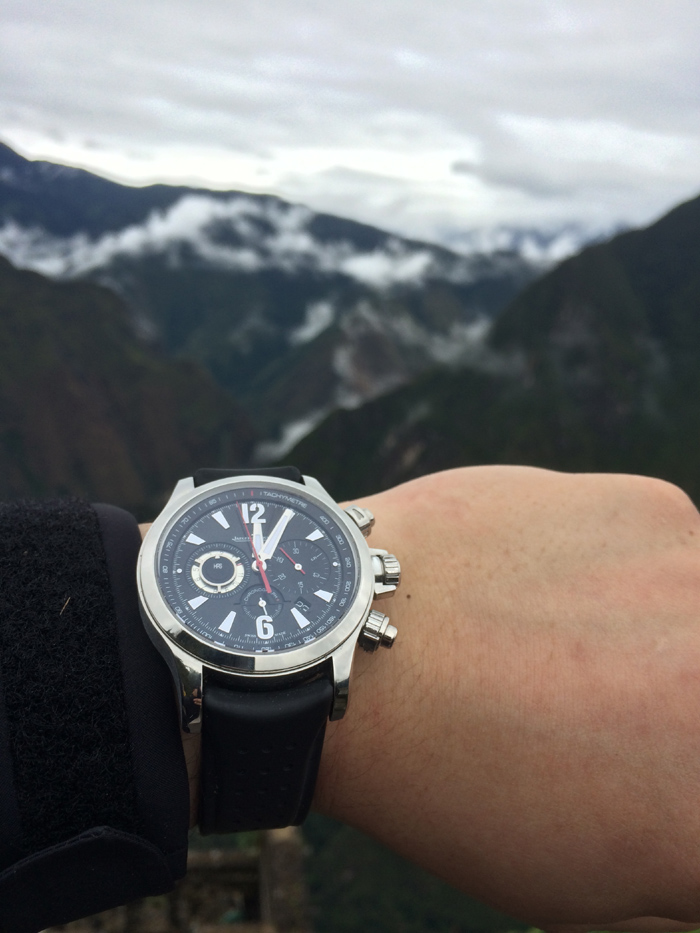 In all, the trip was mesmerizing and exhilarating. The watch – the Master Compressor Chronograph 2 – was a very worthy and steadfast companion. It resisted the rain, the fog, the climate changes — holding steadfast to its purpose of timing not only the hours and the minutes, but the climbs and descents. It was a beacon of light in the dark thanks to its strong luminescence and shock absorbent technology, and rubber strap made it highly functional on the wrist during humidity, heat and rain. In short, while it might not be a tool built for such a climb, it certainly can rise to the challenge – and is a great watch for those of us who just traverse the concrete jungles of the world.  (NOTE: The Master Compressor Chronograph 2 on strap retails for $11,100.)