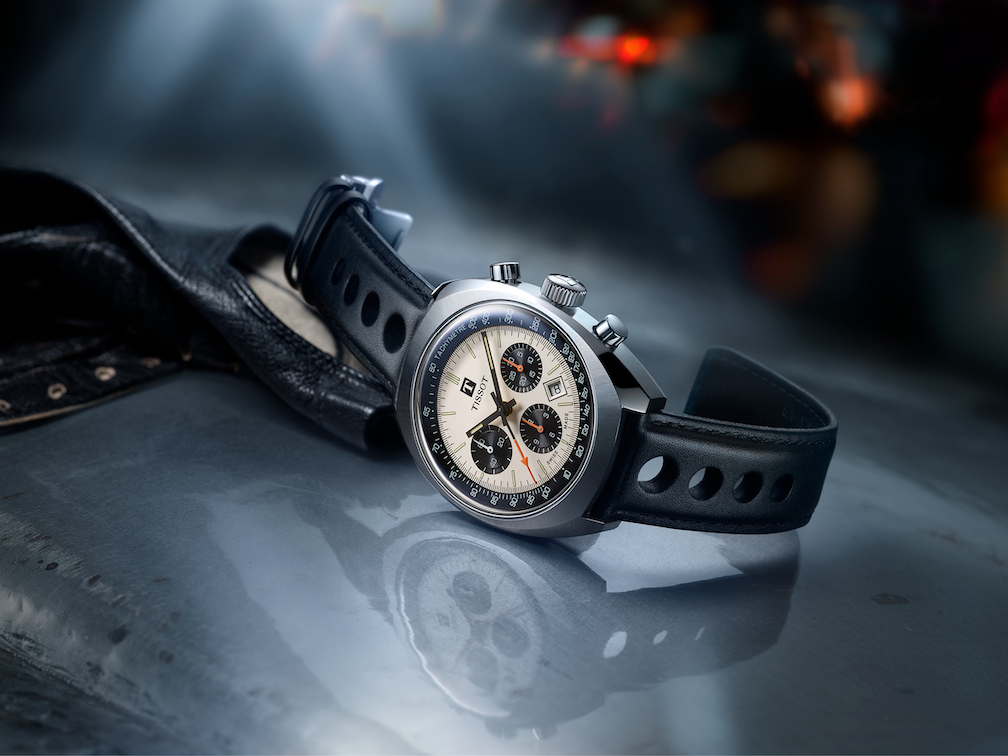 Looking  back in its history, Tissot found an inspiring story that it now brings to light in the Heritage 1973 watch. A modern take on a piece created in partnership with Loris Kessel,  Formula 1 driver in the 1970s, the new watch is the result of a collaboration with Loris’s son, Ronnie Kessel. The son now runs Kessel Racing and is featured in Tissot’s marketing campaign for the watch. 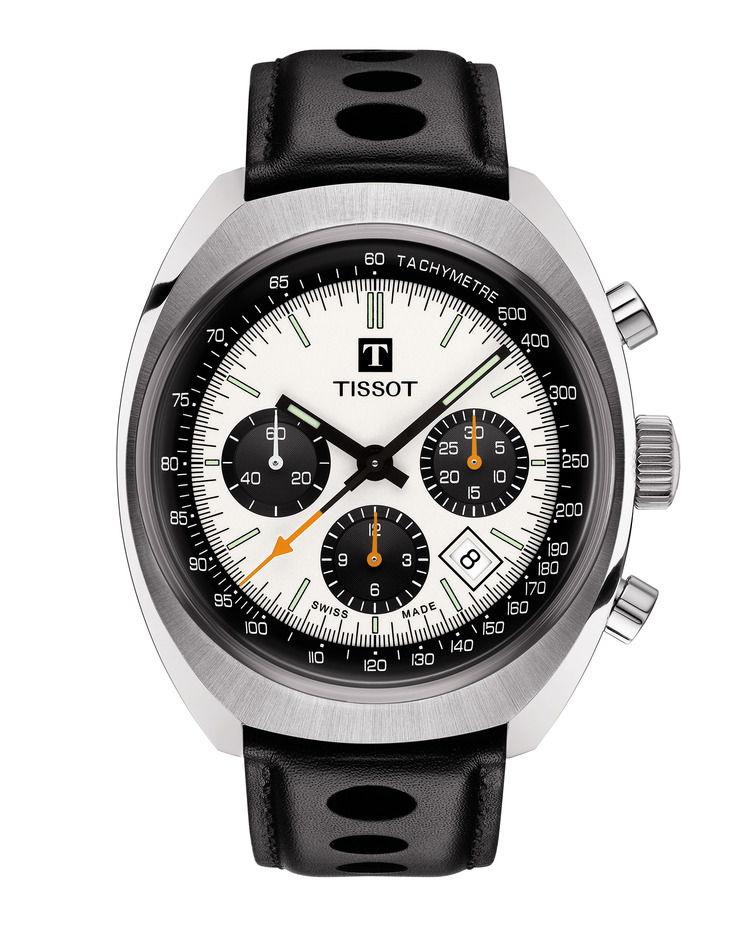 The re-issue  chronograph is  43mm piece  with a silvery grey dial and matte black counters. Built in a limited edition of 1973 pieces, the watches are powered by  ETA Valjoux 7753 self-winding movements. “ True to the spirit of the racing timepieces of the 1970s, the Tissot 1973 is a shaped chronograph is an oval cushion with domed lines. Its crystal is a glass box cut in sapphire. Its second and chronograph hands are orange. The hour and minute hands are rectangular batons ending in a white tip.”

The watch also features a tachymeter dial edge and a black calfskin strap that is a replica of  one Tissot had invented and patented in the 1960s, with large perforations that recall the steering wheels of the time.

Last year,  Tissot became the official partner of Kessel Classics, which owns Tissot Formula 1, a black and white car that has excelled in competitions like the Monaco Historic Grand Prix. It brought the brand’s racing history full circle again.

“In 1974, Tissot joined forces with Porsche for the Le Mans 24 hour Gran Turismo race. In 1977, Tissot even gave a name to an F1 car. But, in particular, a very strong bond was forged between the brand and the Swiss pilot, Loris Kessel, who competed in Formula 1 in 1976 under the Tissot banner.” 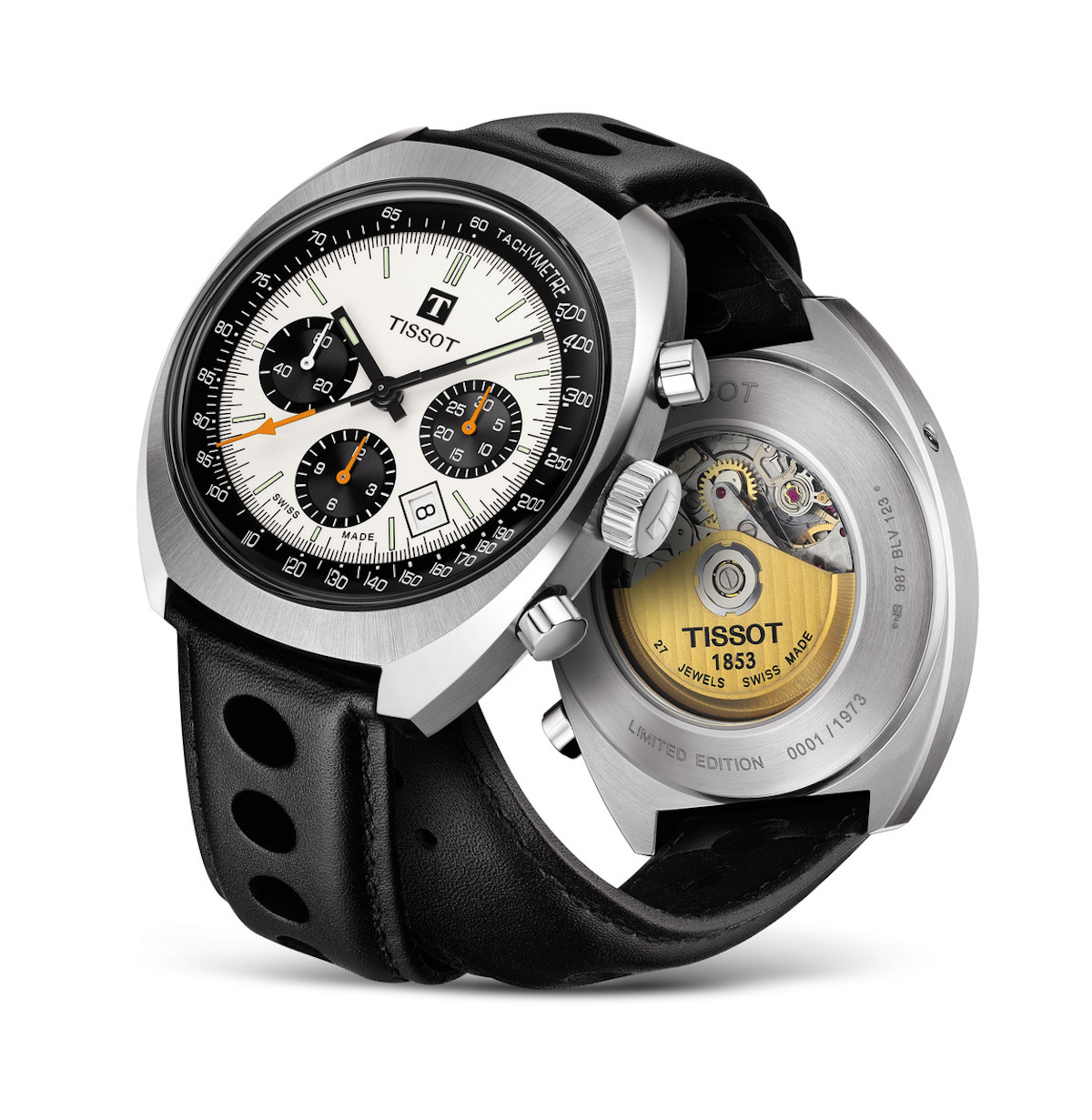 Tissot Heritage 1973 watch is powered by an ETA Valjoux movement

Technical Specifications of the Tissot  Heritage 1973