Earlier this year at the Salon International de la Haute Horlogerie (SIHH) show in Geneva, German watch brand A. Lange & Sohne unveiled its first watch in a series of watches this year that is dubbed the 25th Anniversary watches. The newest watch in the series (unveiled today as the third anniversary piece)  is the Lange 1 Tourbillon Perpetual Calendar 25th Anniversary watch and it is a beauty in both aesthetics and technical prowess. 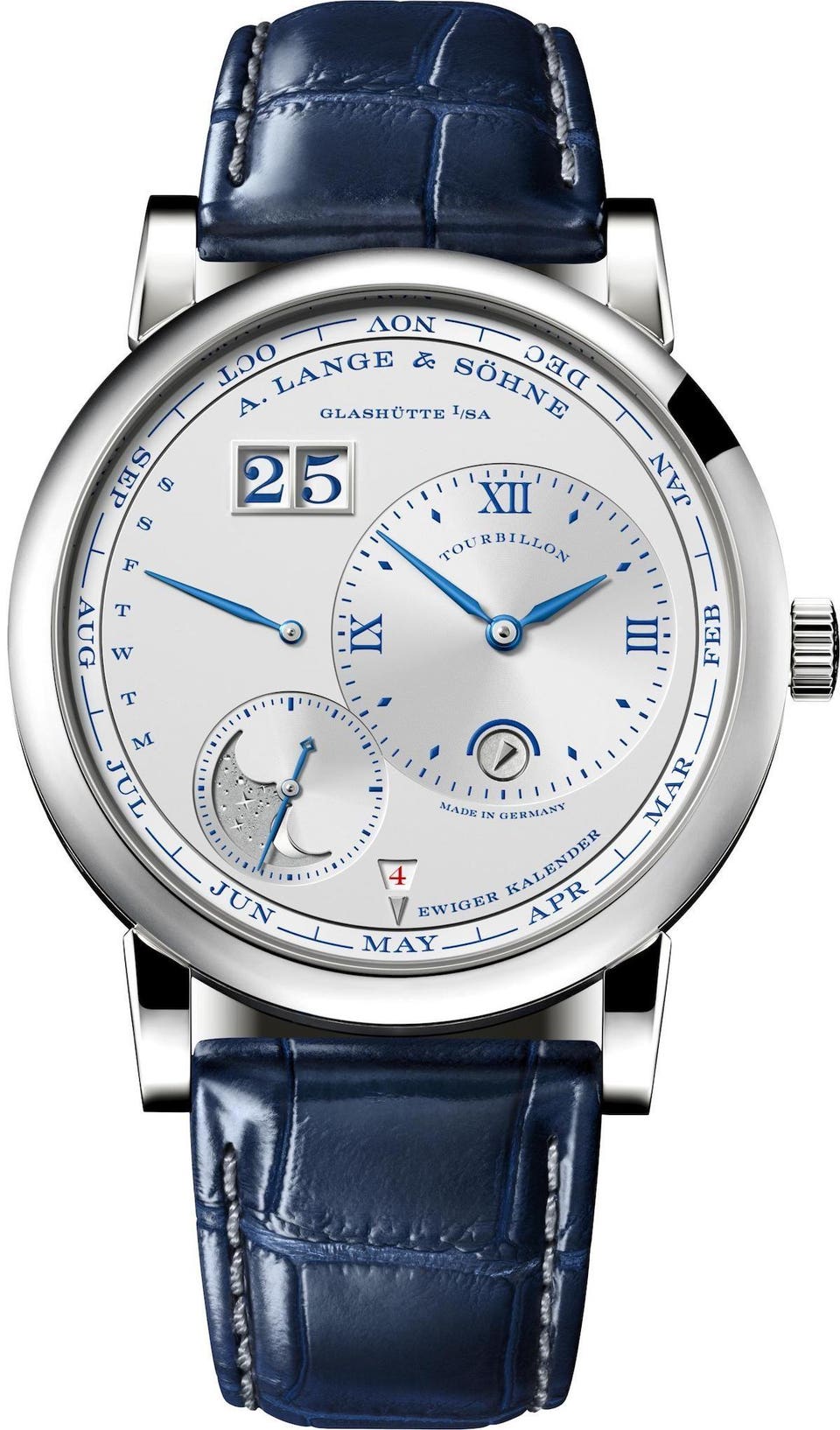 It is important to note that while A. Lange  & Sohne has roots dating back to 1845 when Dresden-based watchmaker Ferdinand Adolph Lange opened his workshops in the Saxony region, the 25th anniversary celebrates the brand’s modern-day roots.  Because A. Lange & Sohne was expropriated after World War II, the brand virtually disappeared. However, with the fall of the Berlin Wall, Lange’s great-grandson, the late Walter Lange worked to start the brand anew. Not only did he establish the Manufacture back in Dresden, but also unveiled watches in 1994  that deftly recalled the elegant precision watches of the past.  Since then, the brand has created  63 manufacture-made calibers — an astounding number in just 25 years.

This year marks the 25th anniversary of the brand’s fresh start. As such, the executives opted to use existing calibers for the anniversary series but highlight them as special thanks to a solid silver dial with rich blue accent colorations on each version. The newest model released today, the Lange 1 Tourbillon Perpetual Calendar, is created in a very exclusive limited edition of just 25 pieces, each retailing for $335,800. 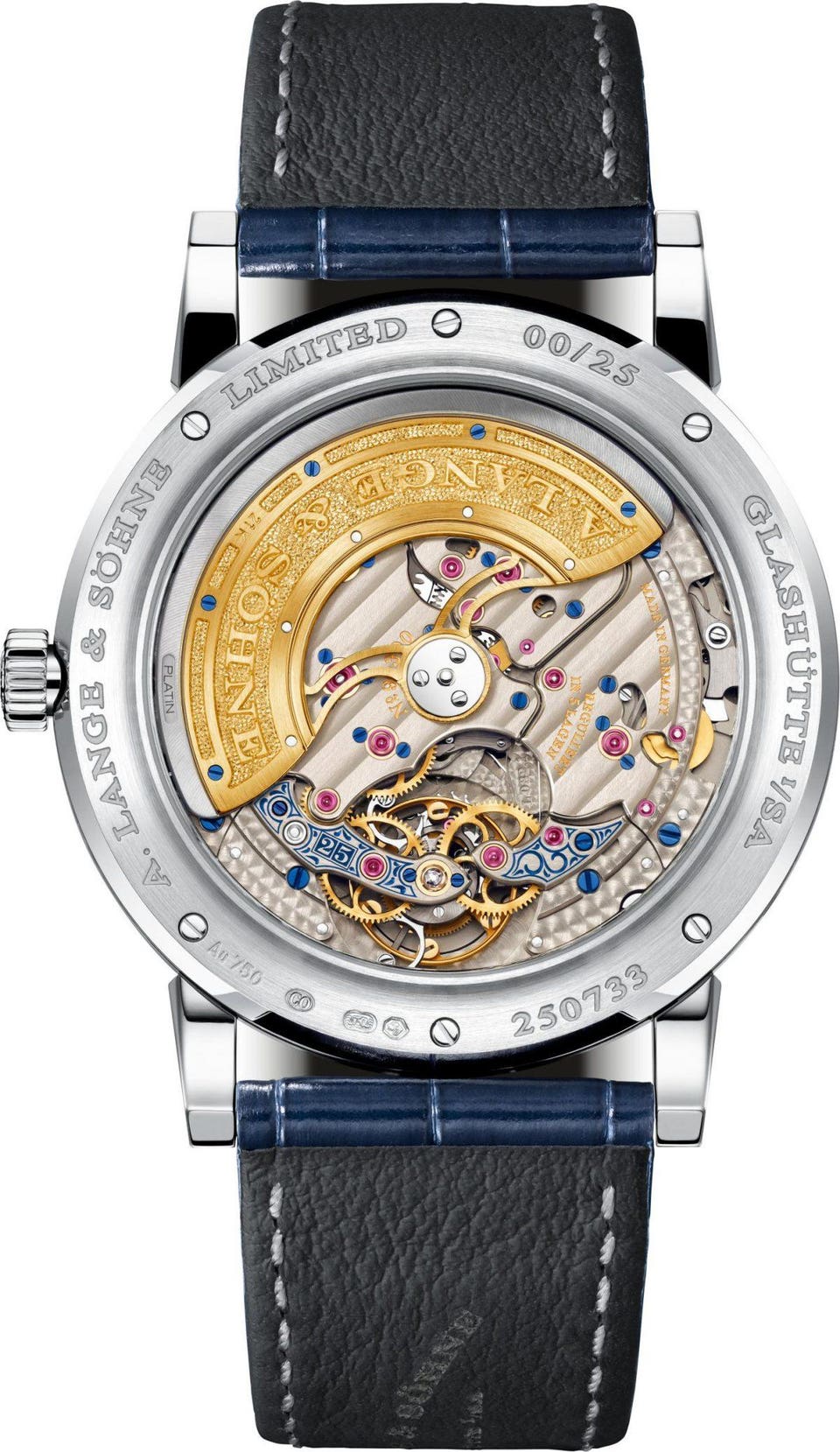 The A. Lange & Sohne Lange 1 Tourbillon Perpetual Calendar Anniversary Watch is powered by a movement with more than 600 mechanical pieces.

The watch, powered by the in-house-made 624-part L082.1 self-winding movement, deftly integrates the perpetual calendar complication with the tourbillon escapement that compensates for errors in timekeeping due to the effects of gravity on the watch when the wrist is in different positions. Like the  first Lange 1 Tourbillon Perpetual Calendar launched in 2012, this watch features a peripheral rotating ring to indicate the month using an unusual spring-loaded lever  and deflection system that enables the watch to automatically “know” when there is a shorter month and indicate the date accordingly.  There is also a retrograde day-of-week indication wherein at the end of the week, the hand jumps back to start the day indication again. The perpetual calendar also offers moon phase display accurate for 122.6 years before needing a slight adjustment, and leap year indication. All of the calendar indications (day, date, month (when applicable)) switch at the same time. The tourbillon (visible only via the sapphire caseback) is equipped with a patented stop-seconds mechanism that enables the watch to be set to one-second accuracy. 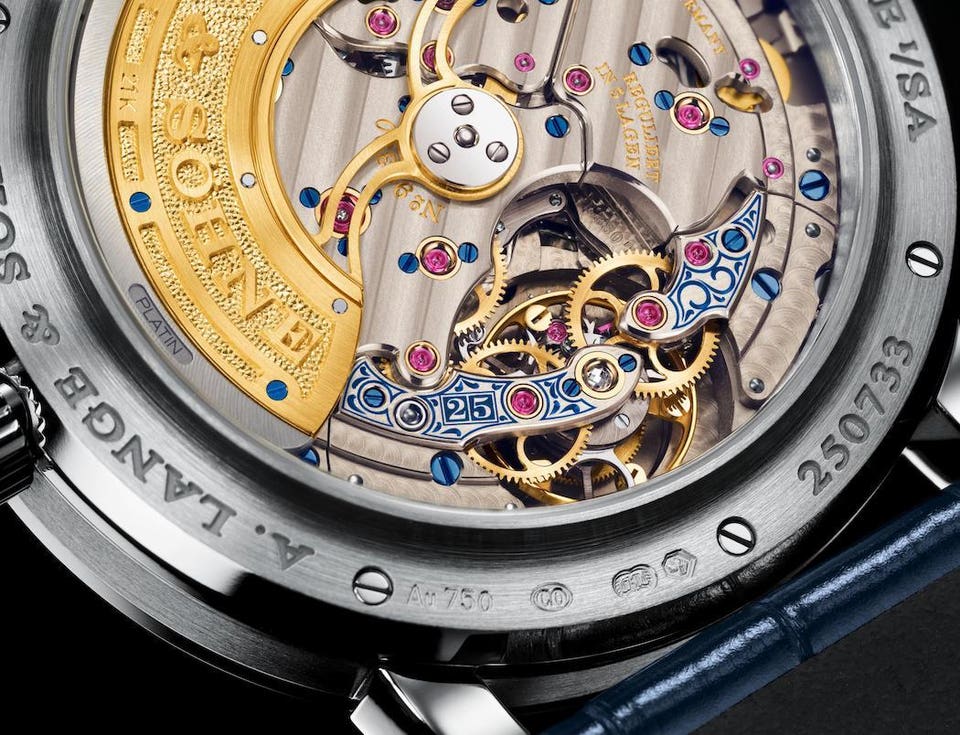 On the back of the A. Lange & Sohne Lange 1 Tourbillon Perpetual Calendar Anniversary Watch is a secret nod to the past with a blue engraved 25.

Crafted in 18-karat white gold, the Lange 1 “25th Anniversary” Tourbillon Perpetual Calendar watch is especially alluring thanks to the solid silver dial with blued steel hands, blue numerals and outside date, and all blue accents. Even the leather alligator strap is a matching hue of blue.   The entire movement,  including the tourbillon, the 21-karat gold central rotor,  and the plates and bridges made of untreated German silver, is visible via teh transparent case back. There, the owner can admire the meticulous finishing for which A. Lange  & Sohne is known.

There, too, one will find an almost secret nod to the past. On the tourbillon cock, engraved to look like the Lange outsized date, is the number 25 in blue. Not only does it recall the anniversary, but also it pays tribute to the thoughtfulness Walter Lange put into everything he did. The first Lange 1 watch was introduced to the world on October 24, 1994. It’s date displayed a 25, however, so that the next day when pictures hit the papers and newsstands, the watches were set to the proper date: 25.

This article by Roberta Naas first appeared on Forbes.com