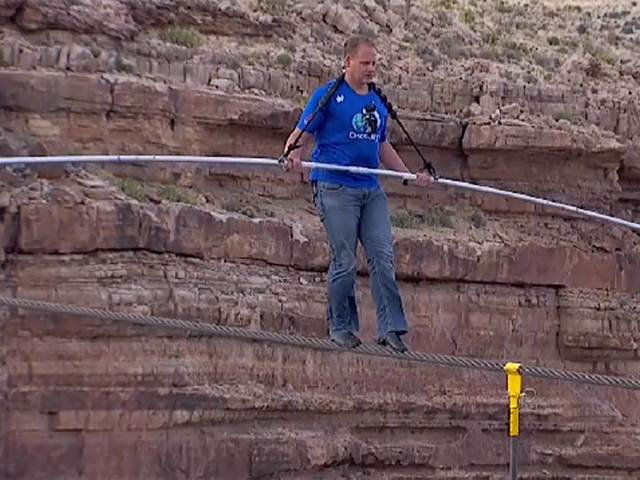 Nik Wallena — first man to walk the Canyon on a tight rope!

Having met Nik Wallenda in person, I was anxious to watch his historic walk. It was an extremely tense walk. I had watched Nik cross Niagara Falls but that was before I knew him — and — to be honest — liked him as a genuine person. This walk — knowing Nik and anticipating his concerns about mother nature — made me on edge.

For nearly 23 minutes, Wallenda battled winds gusting up to 45 miles per hour, as well as updrafts and down drafts. He praised Jesus many times and let the world know where his faith lies. Finally, when he reached the other side — while he kissed the ground first and then his family — everyone else breathed  a sigh of relief.

“It was stressful,” said Wallenda, noting that with the wire swaying and the pendulums beneath the wire swaying differently, there was true optical illusion going on. Wallenda said his faith was key in  staying focused on making it to the other side.