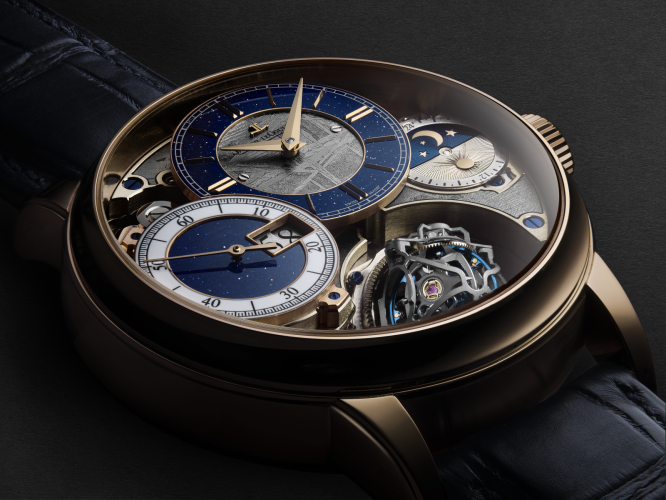 Somehow, the luxury Swiss watch brand from Le Sentier, Jaeger-LeCoultre, never ceases to amaze us. With exceptional watches for women, to the iconic Reverso and Memovox lines, the new Polaris collections and more, this brand just doesn’t stop. With an exceptional fully integrated Manufacture, the brand regularly unveils new timepieces that have the collectors clamoring. Now, the brand unveils the Master Grande Tradition Gyrotourbillon 3 Meteorite watch that deftly blends three-dimension watchmaking with high-tech mechanics and outer space materials. The question is, did the brand go too far?

It was half-a-dozen years ago, in 2013, that Jaeger-LeCoultre unveiled its first Master Grande Tradition Gyrotourbillon 3 to the world (in honor of the brand’s 180th anniversary). It was an evolution of its Gyrotourbillon, but updated to include an ingenious digital display chronograph. This newest Gyrotourbillon 3 is a multi-axis tourbillon that consists of two cages, set at two different angles, turning opposite directions, at different speeds, with a blued spherical balance spring beating like a heart in their centre.  It combines mechanics with a host of metiers d’arts —  Metiers Rares(R) — including hand guiloche work, hand engraving and grand feu enamel — alongside meteorite inlay. 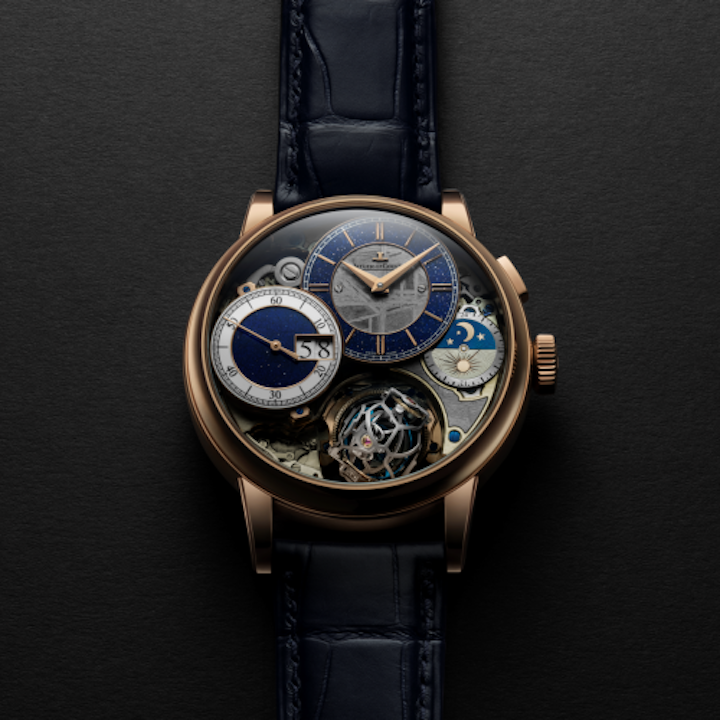 The meteorite used for the time-indication dial (and for decoration of the German silver bridges) of the Master Grande Tradition Gyrotourbillon 3 Meteorite watch, is silver-gray with wonderfully unique striations naturally created as the material fell to earth. Originally discovered in Namibia, the Gibeon meteorite is an iron-nickel alloy with a crystal structure formed by the cooling of the asteroid fragment in outer space over the course of billions of years before it crashed to earth in prehistoric times.

To create inlays of meteorite is a great skill that requires an exacting degree of precision. “The artist first hollows out the surface of the German silver plate or bridge  to a depth that exactly matches the thickness of the meteorite fragment, leaving only a fine fillet of German silver at the borders. Once the new surface has been polished, the meteorite must be laid so that its edges fit seamlessly within the complex, curving borders and its surface lies exactly flush with them, to form a completely flat and unified plane. It is work of the utmost refinement and precision, measured in fractions of a millimeter.”

A close up look at the complex architecture of the Jaeger-LeCoultre Master Grande Traditions Gyrotourbillon 3 Meteorite watch.

To highlight the meteorite even further, Jaeger-LeCoultre turned to aventurine and created an outer disk with the hour markers on it to surround the center dial.  Additionally, the watch uses grand feu enamel in bright white for the chronograph display that surrounds another aventurine disk and showcases the seconds, as well as the minutes elapsed via an instantaneous jumping aperture. The day/night display is on a 24-hour disk at 3:00. It is all powered by Jaeger-LeCoultre’s hand-wound movement, calibre 176, that incorporates a fully integrated chronograph.

Thanks to a beautifully layered architecture, the watch offers a harmonious balance of technical and artistic prowess. Thanks to a sapphire crystal casebook, one can view the design aesthetics, including   blued screws, ruby jewels, hand-chamfered and hand-polished jewel countersinks, bridges and plates, and so much more. While the price tag of 800,000 Euros (almost $900,000) is steep, the investment is into some of the finest watchmaking, artistry and materials ever released. And, there are only 8 pieces bing made.  I personally like the look of the geometric patterns on the meteorite and the way they play off against the constantly moving escapement and the aventurine and grand feu enamel.