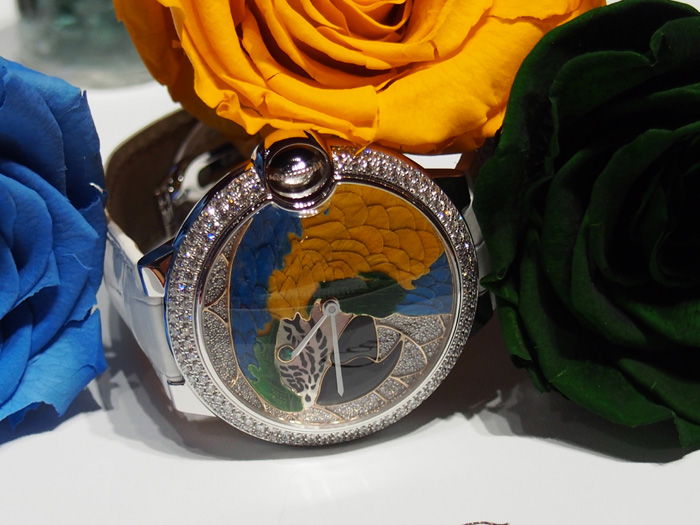 So I survived Geneva.  Thanks to sheer determination to bring my loyal readers the best coverage possible,  I endured the following:   descending into shark infested waters (sort of ) with IWC; entering into a hyperbaric chamber (for real) with Breva ; being transported back in time to the late 19th century (sort of ) with Roger Dubuis; enduring 6:30 am wake-up calls daily (despite a 2 am bedtime); examining thousands  of watches up close and personal  over the course of five days (and loving every minute of it – no pun intended). 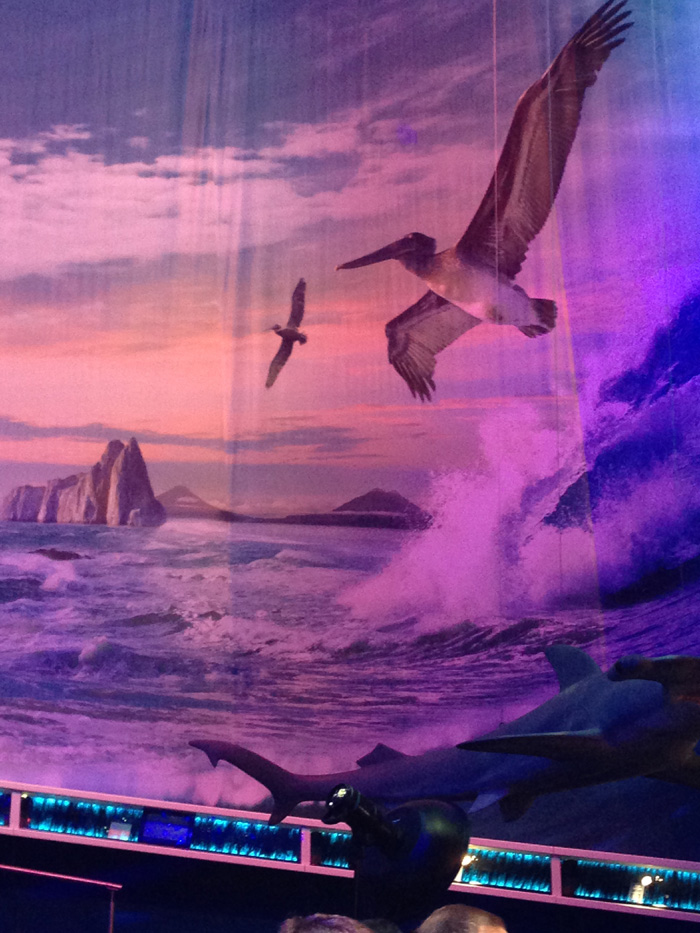 The IWC booth at SIHH was all about being inside the wave.

Let’s start with the SIHH – the exhibition that houses 16 top brands, including all of the Richemont watch brands, as well as Audemars Piguet, Greubel Forsey, Parmigiani and Richard Mille.  I attended the show for a full three days (sorry to some of my collector readers and retail friends whom I saw only briefly while there) and still, time was very tight.  It was all about getting up at 6:30, being out the door by 8, getting the shuttle to the show, having private meetings, group presentations, photo shoot sessions and executive interviews (and a celeb interview with Susan Sarandon –but more about that later).  All of the new watches- some which I brought to you each day last week while there and others that I will continue to bring to you in the ensuing weeks – had different features and aesthetics to offer (including one with a watch dial made of flowers!). Unfortunately, they won’t make their way to retail stores until summer or fall, so you have to be content with our journalistic coverage until then. 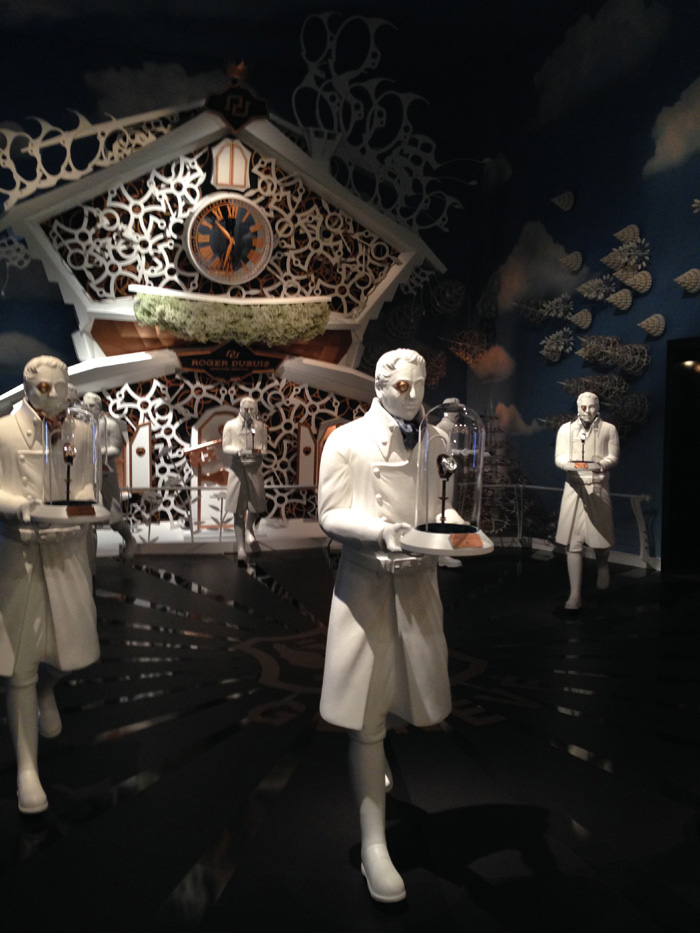 The Roger Dubuis booth was extraordinary.

Today, we just want to tell you about the exhibition space and a few cool experiences. At SIHH, the “booth” that stood out this year was Roger Dubuis (though booth is a significant misnomer for these large house-like spaces). This year, Roger Dubuis recreated a Swiss forest setting – complete with cuckoo clock – with every single tree and flower built from hundreds of parts made in the likeness of watch components. Standing in the center of the room were life-size mannequins with loops in their eyes and carrying spectacular new watches under glass domes. Every hour, the cuckoo would come out of its spot on the clock at the back of the room and tweet the time – triggering the mannequins to make a complete turn.  The concept is meant to embrace the heritage of fine Swiss watchmaking, while also offering Roger Dubuis’ decidedly visionary view of time. You can see a quick video of the mannequins in motion in the video below (sorry about the guy who opted to walk right in front of me while videotaping).

The other great space this year was from – you guessed it — IWC, which recreated life under the ocean as though caught in a great wave. Life-size models of sharks hung from the ceiling and you felt engulfed by the sea thanks to floor-to-ceiling ocean murals – all in an effort to promote the brand’s product releases this year in the Aquatimer family. 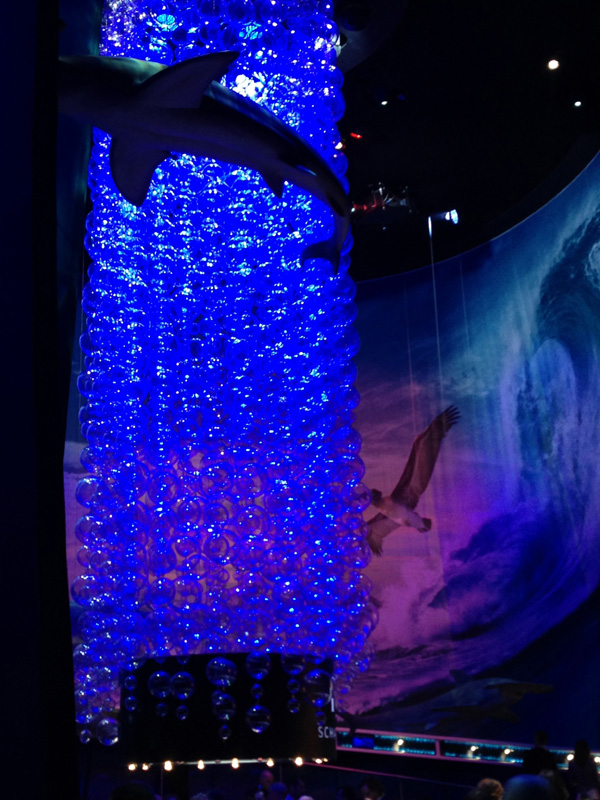 The IWC booth -designed to introduce the new Aquatimers — had a surreal feeling to it.

On the day before and after the SIHH exhibition, I traversed the great city of Geneva, visiting another 20 brands that exhibit in their own boutiques or in hotels. Among them: Breva – a totally exciting brand with way over-the-top barometric watches. Here, I entered a hyperbaric chamber to infuse the watch with atmospheric pressure changes so that it could indicate the weather change for me. While one does not need to enter a chamber to use the watch under normal circumstances, I had to do so to get the watch to react to weather changes at higher altitudes. I’ll be bringing you more about that this week. 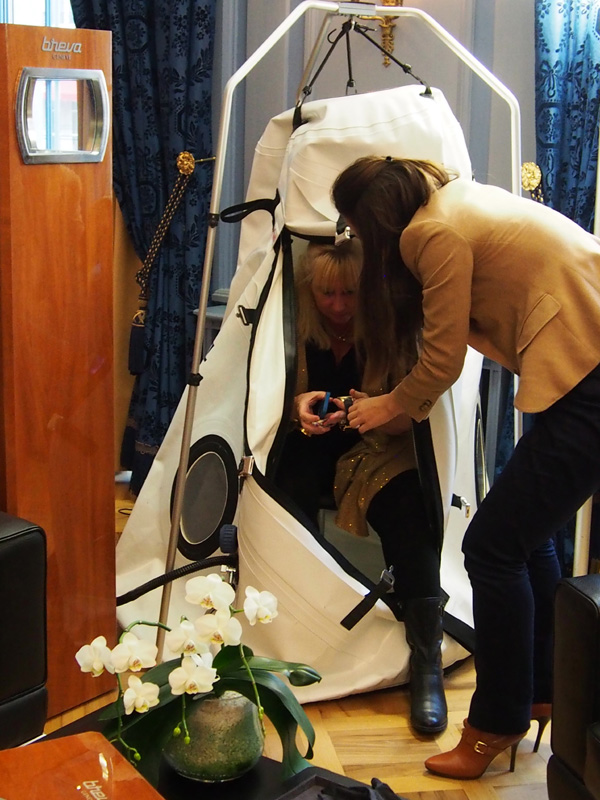 Getting out of the hyperbaric chamber at Breva.

In all, it was an exciting, exhilarating and exhausting week, and I look forward to sharing the fruits of the watch brands’ hard work with you in the coming month. Stay tuned.