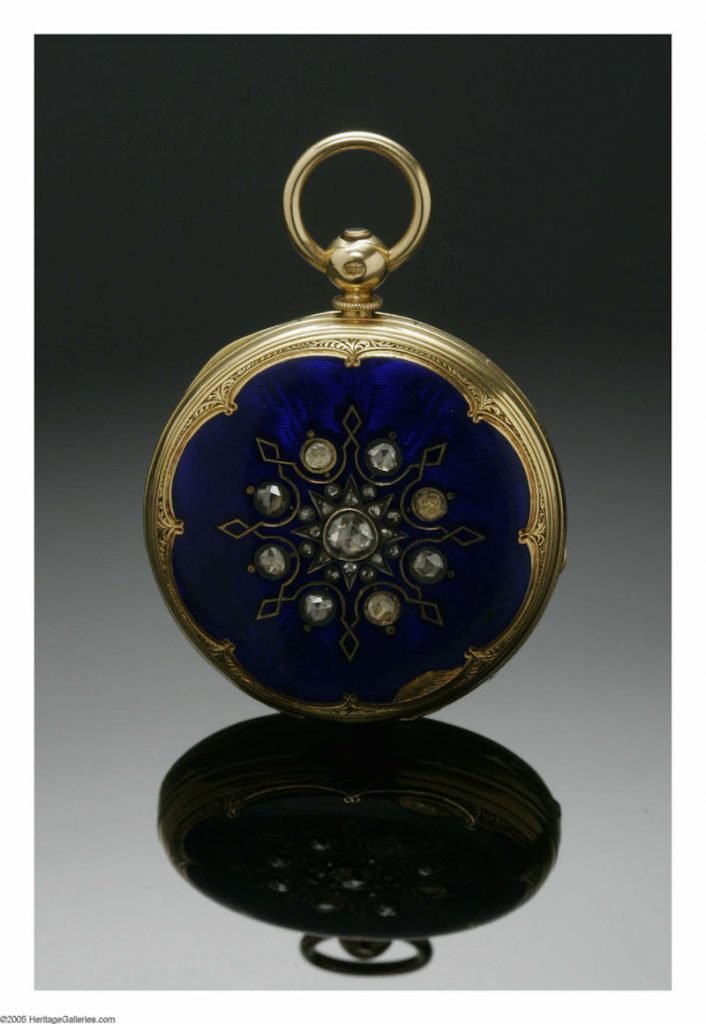 Circa 1841 gold, enamel and diamond pocket watch that Abraham Lincoln bought for Mary Todd as a wedding gift.

Vintage watches always capture our attention, especially when the provenance is crystal clear and significant. At the upcoming Baltimore Art, Antique and Jewelry Show (August 25-28), one such vintage timepiece will be up for sale. A rare piece of history, the watch is an 18-karat gold and enamel pocket watch that Abraham Lincoln bought as a wedding gift for Mary Todd in 1841.

According to the current owner, New York-based Gotta Have it! Collectibles, little is known about the watch except that for some reason, Mary Todd never received it. Prior to their marriage, Lincoln purchased the 18-karat gold pocket watch with blue enamel and diamond adornments and had the inside back cover engraved with the words: “To Miss Mary Todd from A.L. 1841.” 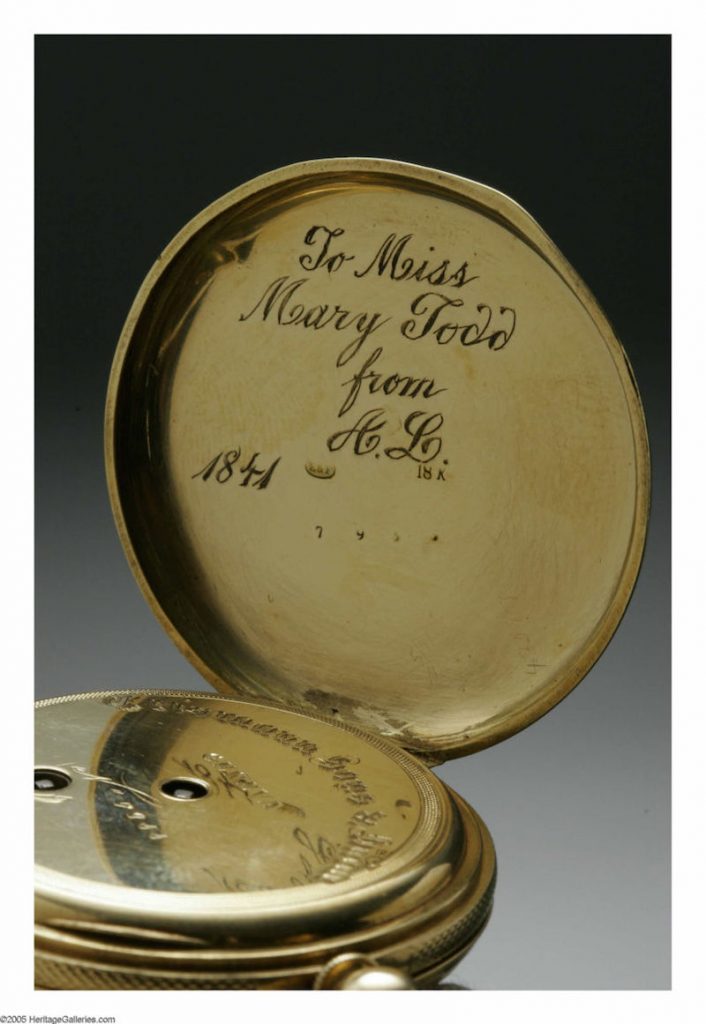 Lincoln had the watch specially engraved for her.

It seems that on the day of their wedding, the couple argued and the wedding was called off (although other stories say that Lincoln terminated the engagement prior to the wedding. The couple’s marriage did finally take place — a year later in 1842. In the interim, however, Lincoln, on impulse, gave the pocket watch to Mary Curtis, whom he had met a few times.

As the story goes, she did not realize at first that it was inscribed with Mary Todd’s name, but when she saw the engraving a few days later, she put the watch away in a trunk. It stayed there for more than three decades. When Curtis was dying, in 1872, she wrote a letter to her closest friend, Mary (Elizabeth) DeWitt and gave her the pocket watch. 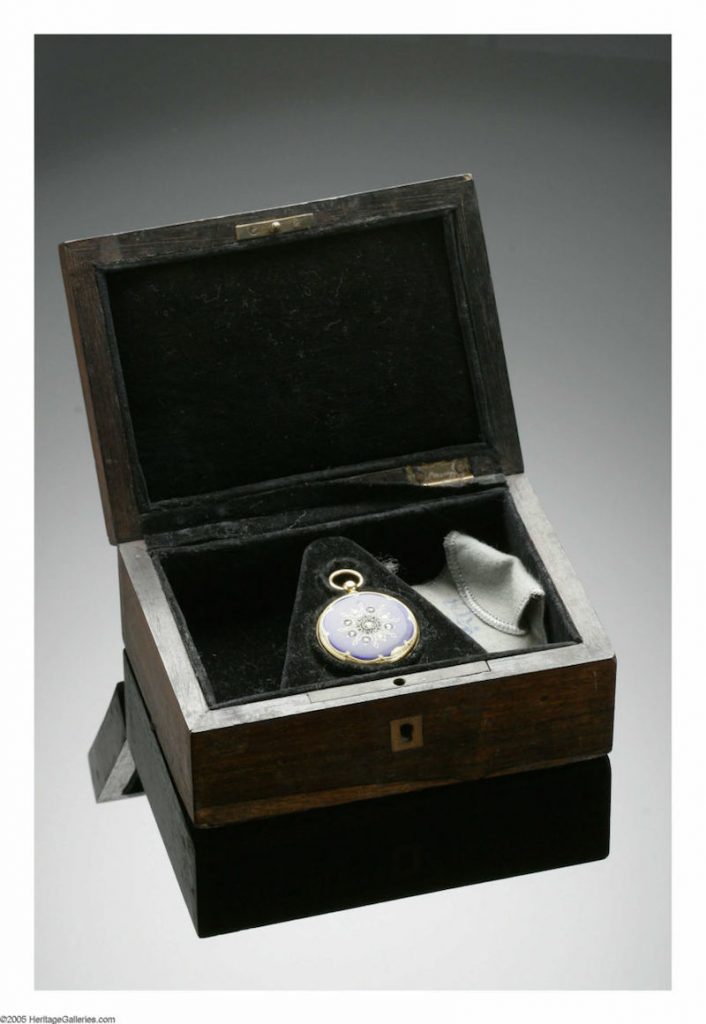 The watch, which Lincoln never gave to Mary Todd, is for sale with original box and gifting letter.

The watch has changed hands several times since then. It was even part of a New York City exhibit, “The Life and Times of Abraham Lincoln” in 1936. The watch sold several decades ago, along with winding key and original box, for $71,700 to Heritage Auction Galleries in Dallas, and then subsequently sold again. It is now being offered for sale by Gotta Have It! Collectibles Inc. and will only be up for sale during the Baltimore show. IT will be sold with the original wooden box, the key and the handwritten letter from Mary Cutis to DeWitt when she gifted the watch to her friend. What price this provenance? The watch is being offered for $175,000. 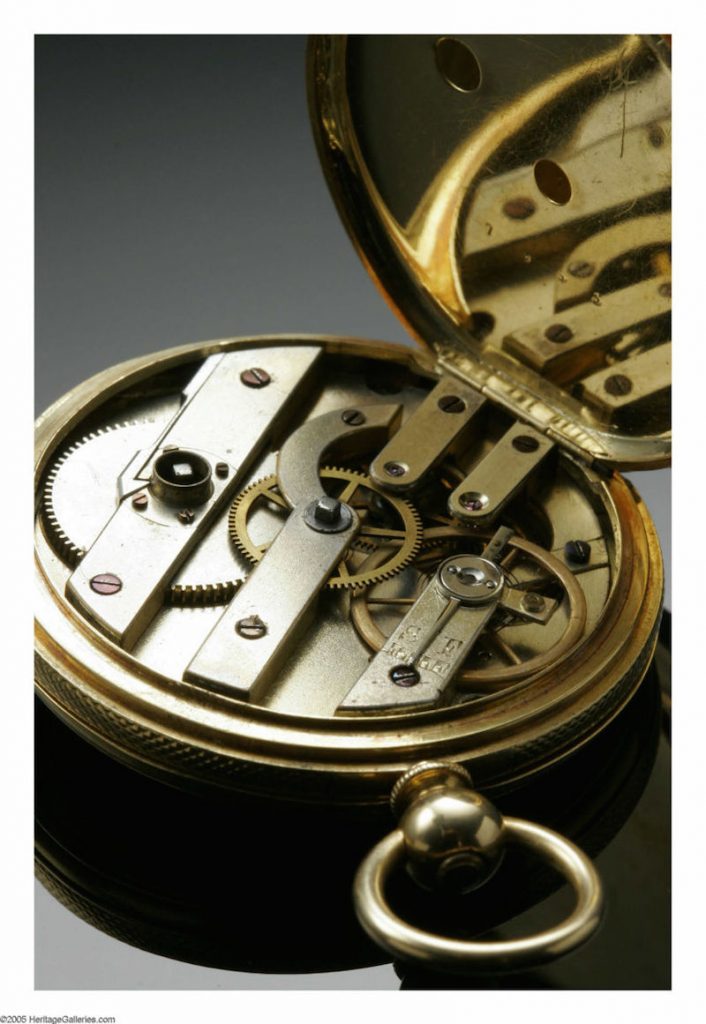 The watch, being sold with documentation for $175,000, is a fine example of mid-19th century watchmaking.