Louis Moinet Red Eclipse is a special edition piece that celebrates the brand’s 200th anniversary of inventing the chronograph.

You are seeing it here for the first time on line, as Louis Moinet shares this exclusive with ATimelyPerspective: the Memoris Red Eclipse watch. Created in celebration of the 200th anniversary of the brand’s invention of the chronograph, the brand is releasing the Red Eclipse. The official unveiling will be on September 16 at an event entitled “200 Years in 24 Hours” that will be held at the Neuchatel Observatory – where guests will see the watch for the first time, observe the eclipse of the moon and have several other surprises revealed to them. The watch is a tribute to the astronomical observations of Louis Moinet and to the incredible innovation of the brand, particularly its invention of the chronograph in 1816.

The Red Eclipse  is a follow-up to the two Memoris watches that were unveiled earlier this year at SIHH and BaselWorld, one of which we wrote about here. Like its siblings, the Memoris Red Eclipse is a monopusher chronograph whose entire workings are visible from the dial side of the watch. In fact, the automatic movement is designed around the chronograph. With a press of the pusher, the mechanism comes to life, with the column-wheel chronograph as the star of the show. From there it is a rhythmic move of gears, teeth, levers and more that transmit the information to the hands in a beautifully orchestrated dance of mechanics and performance. Every piece has been meticulously hand-finished, polished and engraved. 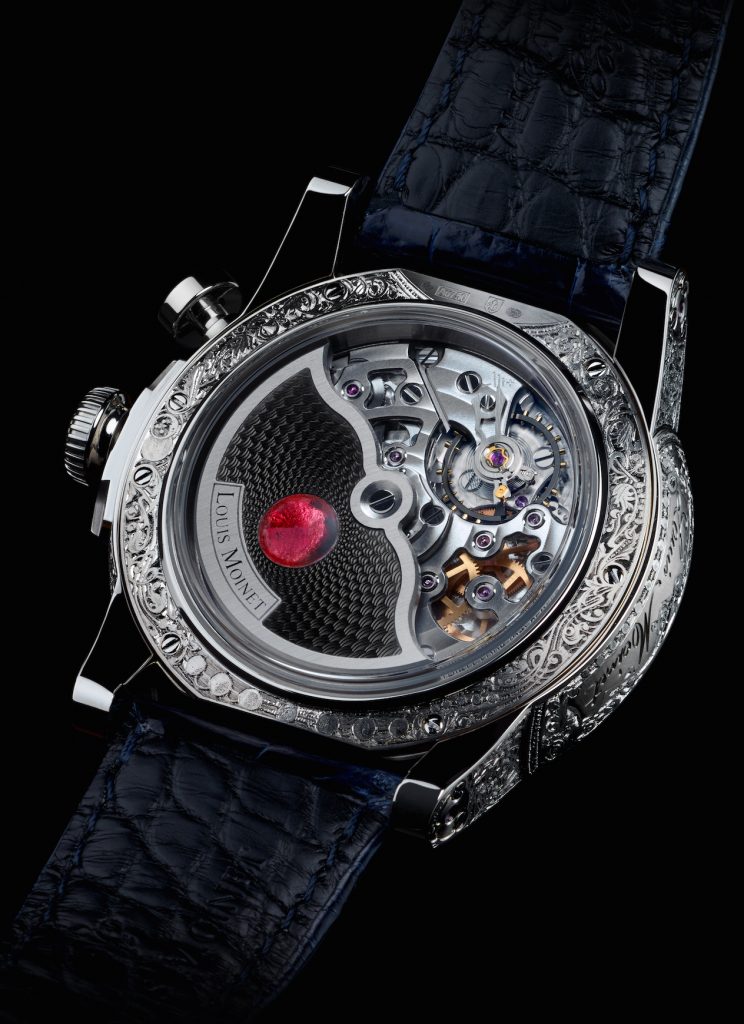 An enamel red moon stands out agains the starry night sky motif of the rotor.

In addition to the chronograph subdials and blue hands, there is a blue enamel subdial at 6:00 that displays the time. The chronograph and movement parts sit atop a stunning blue enamel background of a starry sky. The outer minute track is a darker midnight color.

It is on the reverse side of the watch, though,that the timepiece’s name comes to life. The
Memoris Red Eclipse features an ingenious, automatic pawl winding system, the “Energie Plus” system, that optimizes each movement of the rotor, winding the movement more effectively. The rotor is mounted on a high-tech ceramic ball bearing and is decorated with a magnificent engine-turned “panier” motif with angling and black polishing. Then, in all its glory, a red moon (in lunar eclipse form) created in gold-leaf enamel. The entire movement, including bridges and plates are finely finished and the sapphire caseback provides a stunning view of the mechanics.  Louis Moinet doesn’t stop at the inner workings, though. The brand also presents a beautifully engraved white gold case, bezel and lugs.The hand engraving with a swirling star motif takes hundreds of hours to complete.

The white gold timepiece is hand engraved on the case and bezel.

Like all timepieces created by Louis Moinet, this new watch blends the best of innovation, elegance and unparalleled watchmaking. It is the ultimate celebration of the 200th anniversary of the brand’s invention of the chronograph. it will retail for 96,000 Swiss Francs.

For those who feel like indulging in history, the “200 years of the Chronograph”video below gives a glimpse inside the Louis Moinet invention in 1816 and its world moving forward.