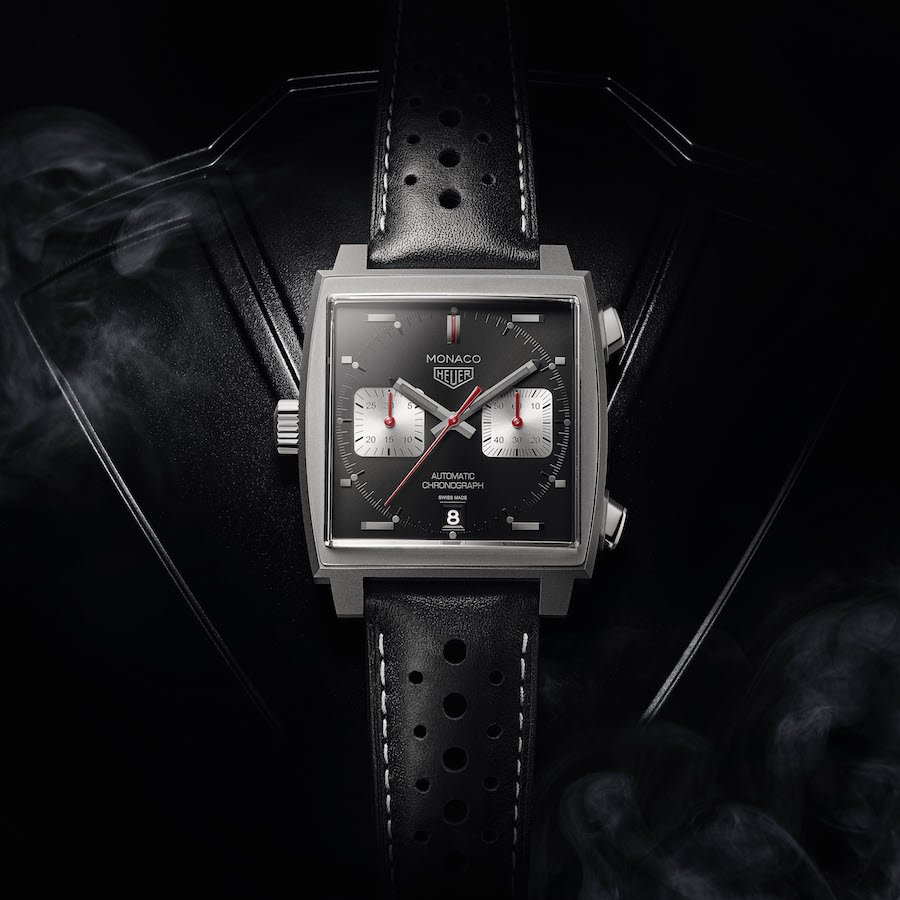 This year marks the  epic 50th anniversary of the TAG Heuer Monaco watch. The beloved square-shaped timepiece was born in 1969– the brainchild of Jack Heuer.  It was the first automatic-winding chronograph movement and captured the attention of Steve McQueen, who wore it in the movie LeMans.  It  fast became an iconic legend in time. This year to celebrate the historic watch, TAG Heuer has been unveiling a series of Anniversary Monaco watches — one for each decade of history.  The most recently released watch  — representing the decade from 2009-2019 — may well be the most modern and alluring Monaco of all.

Sleek and unabashed in its presentation, the newest Monaco 2009-2019 watch boasts a sandblasted stainless-steel case and polished pushers. The charcoal-colored sunray dial is adorned with black-gold-plated indexes with SuperLuminova®. The rhodium-plated subdials also boast a sunray effect and the subdial hands and central seconds hand are in bold red for added appeal.  “As with the original, the pushers are on the right of the case while the polished crown is on the left – an unconventional feature that has distinguished the Monaco over the past 50 years.” 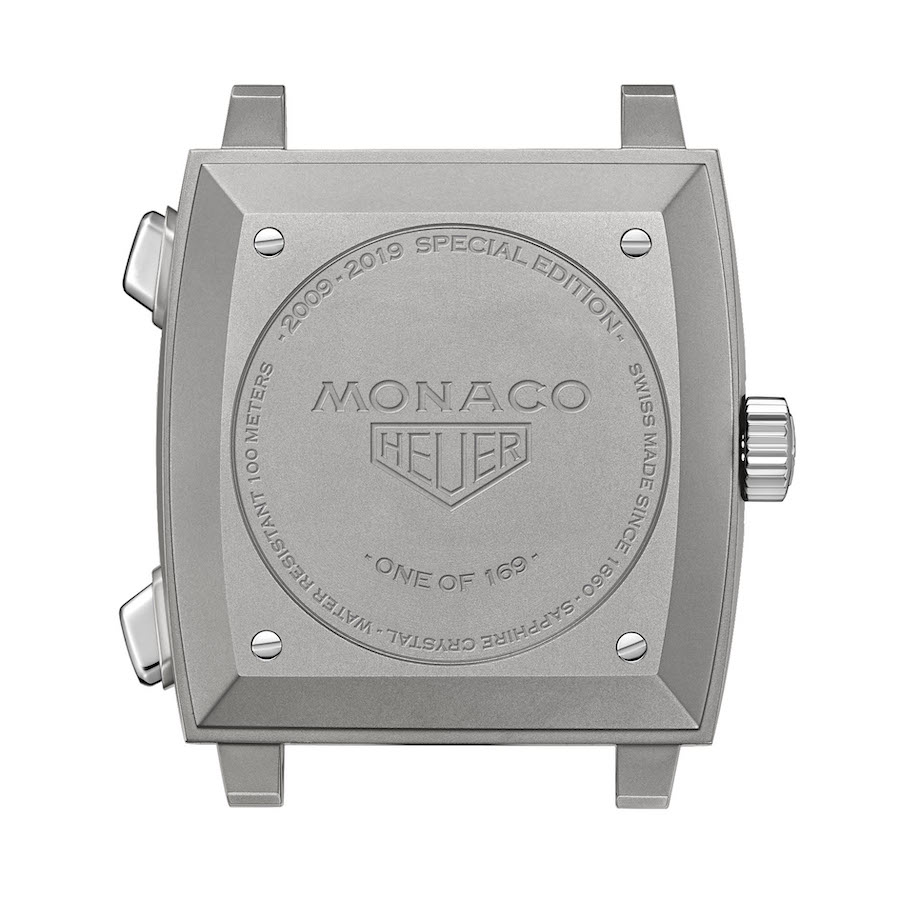 The caseback  is engraved with the “Monaco Heuer” logo, as well as with the “2009-2019 Special Edition” and “One of 169”.  The watch houses the brand’s Calibre 11, a modern version of the automatic-winding chronograph movement that made its debut inside the original Monaco in 1969. Just 169 pieces will be made, each retailing for $6,550.

“The first of these limited-edition models, inspired by the years 1969 to 1979, was unveiled at the Monaco Formula 1 Grand Prix in May, and the second limited edition, celebrating the period from 1979 to 1989, was presented in June in Le Mans, France. The third edition of the Monaco watch, inspired by the 1990s, made its grand debut in New York in July. The previous event for the fourth edition, honoring the sleek style of the early 2000s, received international acclaim after being introduced at an event in Tokyo in September.” 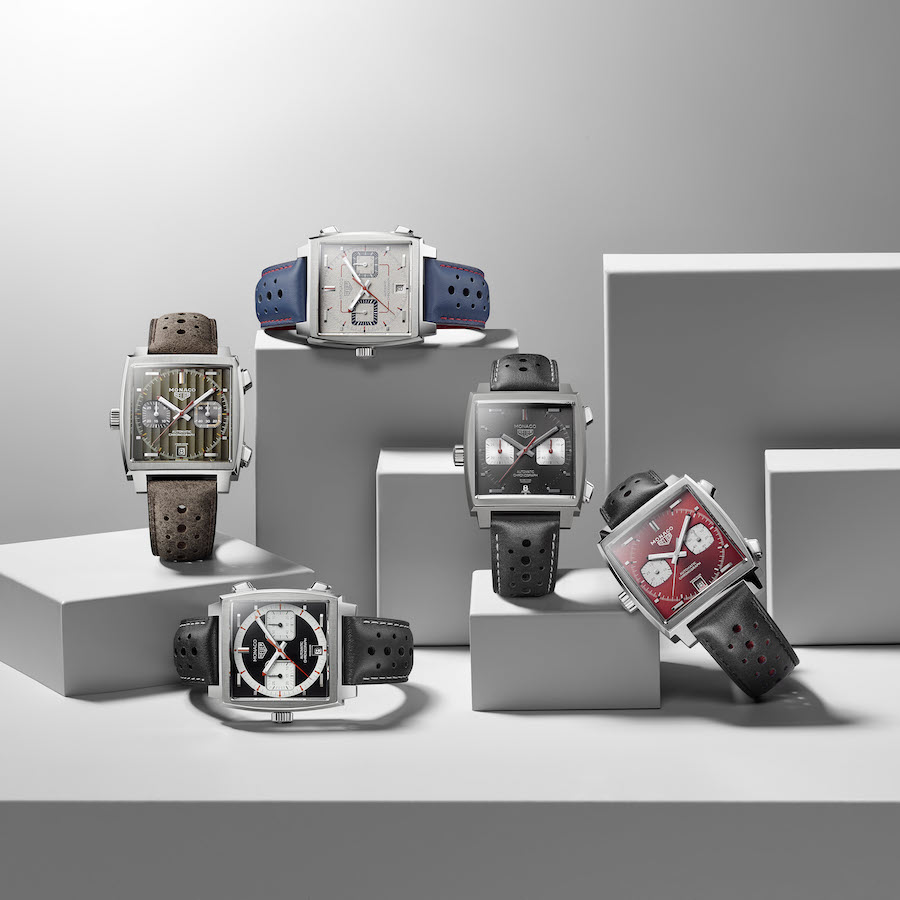 All five versions of the TAG Heuer 50th celebration of the Monaco.

SPECIAL PACKAGING:Like the watch itself, the watch box is also inspired by the original. Each of the special-edition models comes in a box with colors that match the watch and the decade it represents. The 2010s-inspired model is packaged in a dark blue box decorated with the Heuer logo and a horizontal check-pattern stripe. The watch is placed on a grey cushion and surrounded by a black interior. 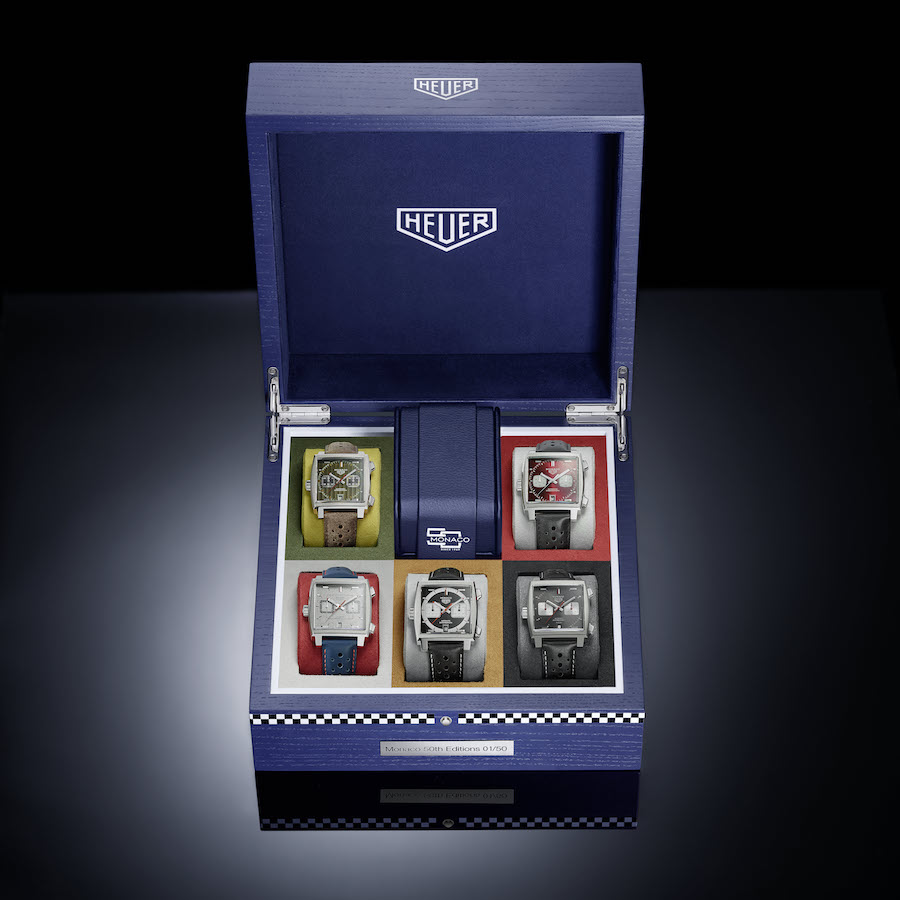