Citizen Unveils New Ana-Digi Star Wars Watches: May The Fourth Be With You 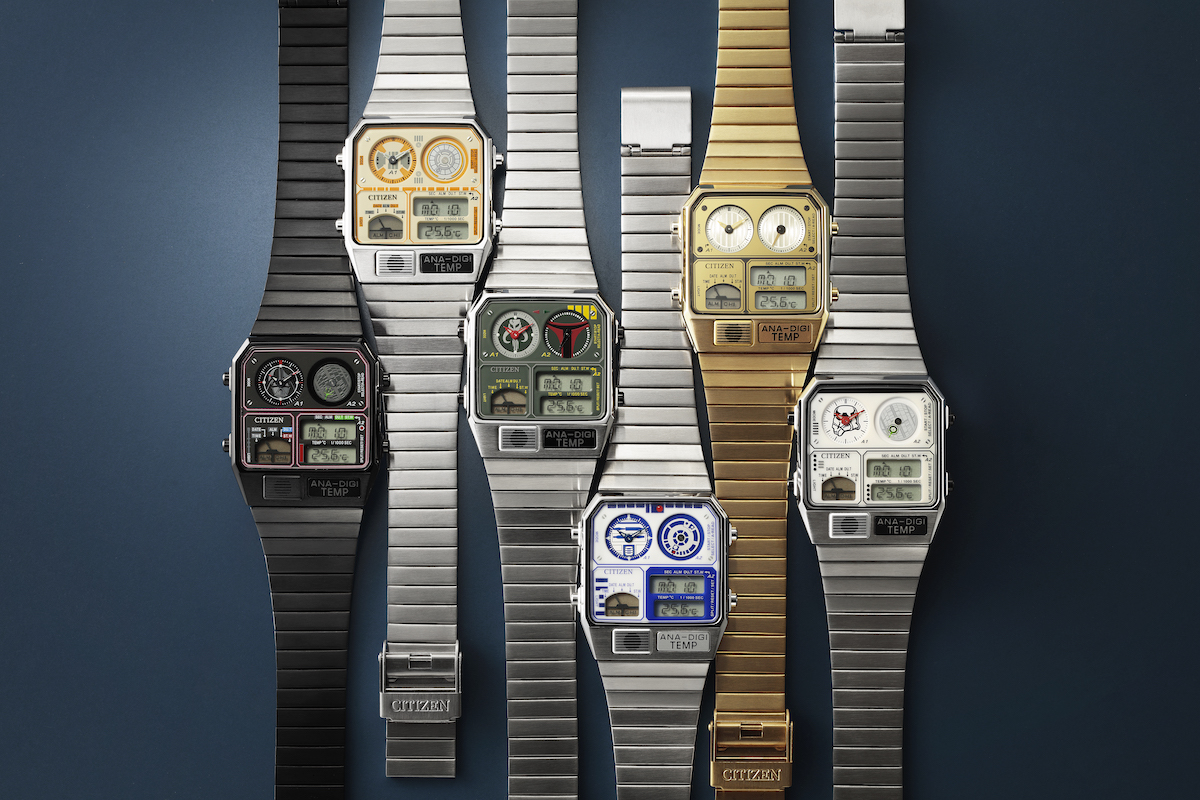 Japanese watch brand Citizen has an Alliance Partnership with Disney, which owns Star Wars/Lucas Films. Citizen is the Official Timepiece of the Walt Disney World Resort, Dinseyland Resort, Disneyland Paris Resort and more. It also has a partnership via Disney with Star Wars, and as fans around the world prepare for the Fourth to be with them today, Citizen launches an all-new Ana-Digi Star Wars Collection of watches.

The Citizen Ana-Digit Star Wars Collection has a real vintage appeal that recalls the era of the Original Trilogy. Citizen originally introduced the Ana-digi Temp model in the 1980s. It combined analog and digital elements together in a crazy, futuristic design. The multifunctional watch also included a Celsius temperature sensor. That model was reissued in 2018 in collaboration with Beams. 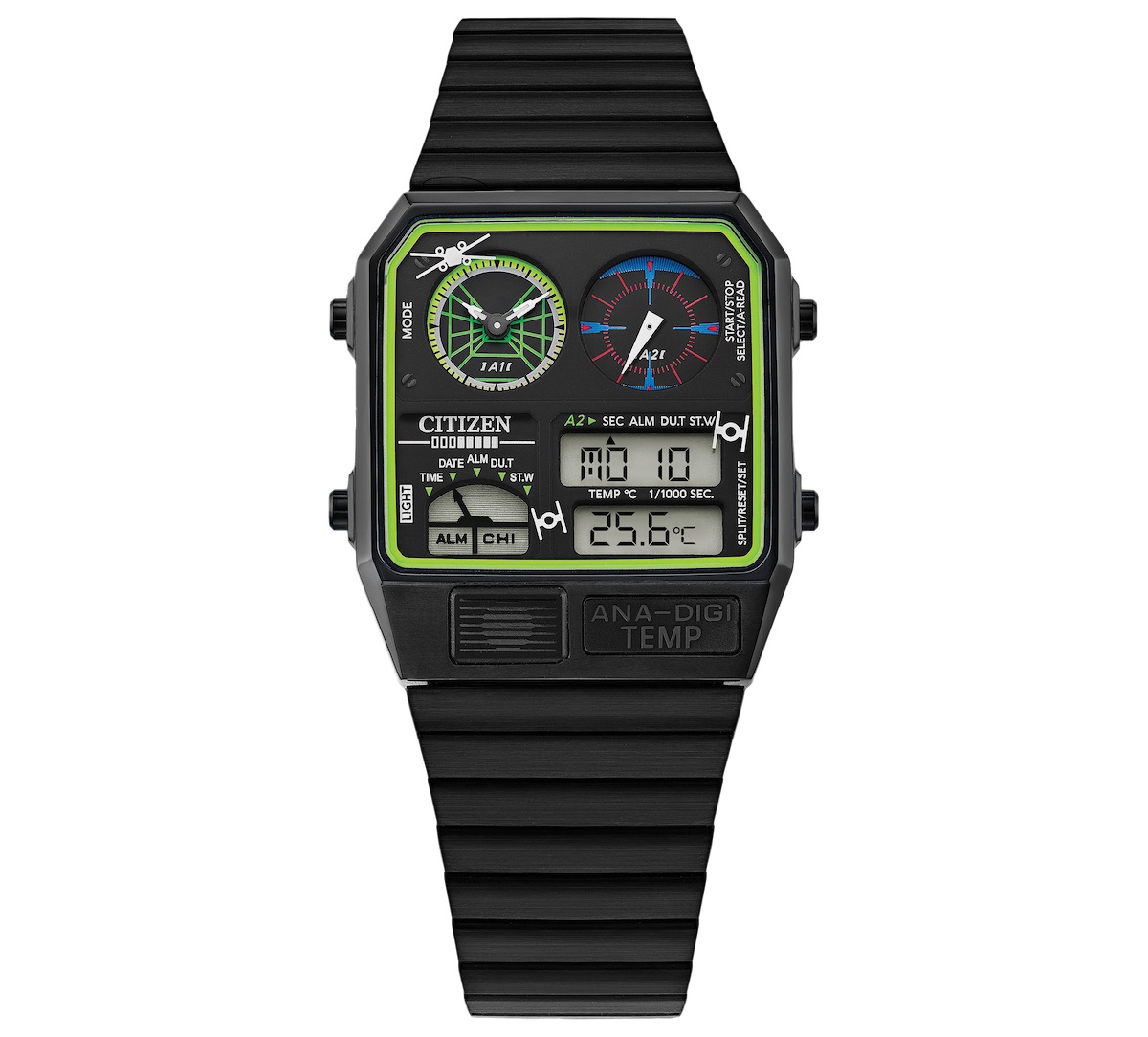 Now, Citizen adds six new limited-edition models to the line up. All designs were inspired by popular Star Wars characters and feature some signature elements and accents  in the designs.  The watch dials include colors and motifs that were specific to each character and the Star Wars logo, as well as a drawing of each character, is engraved on the case back. 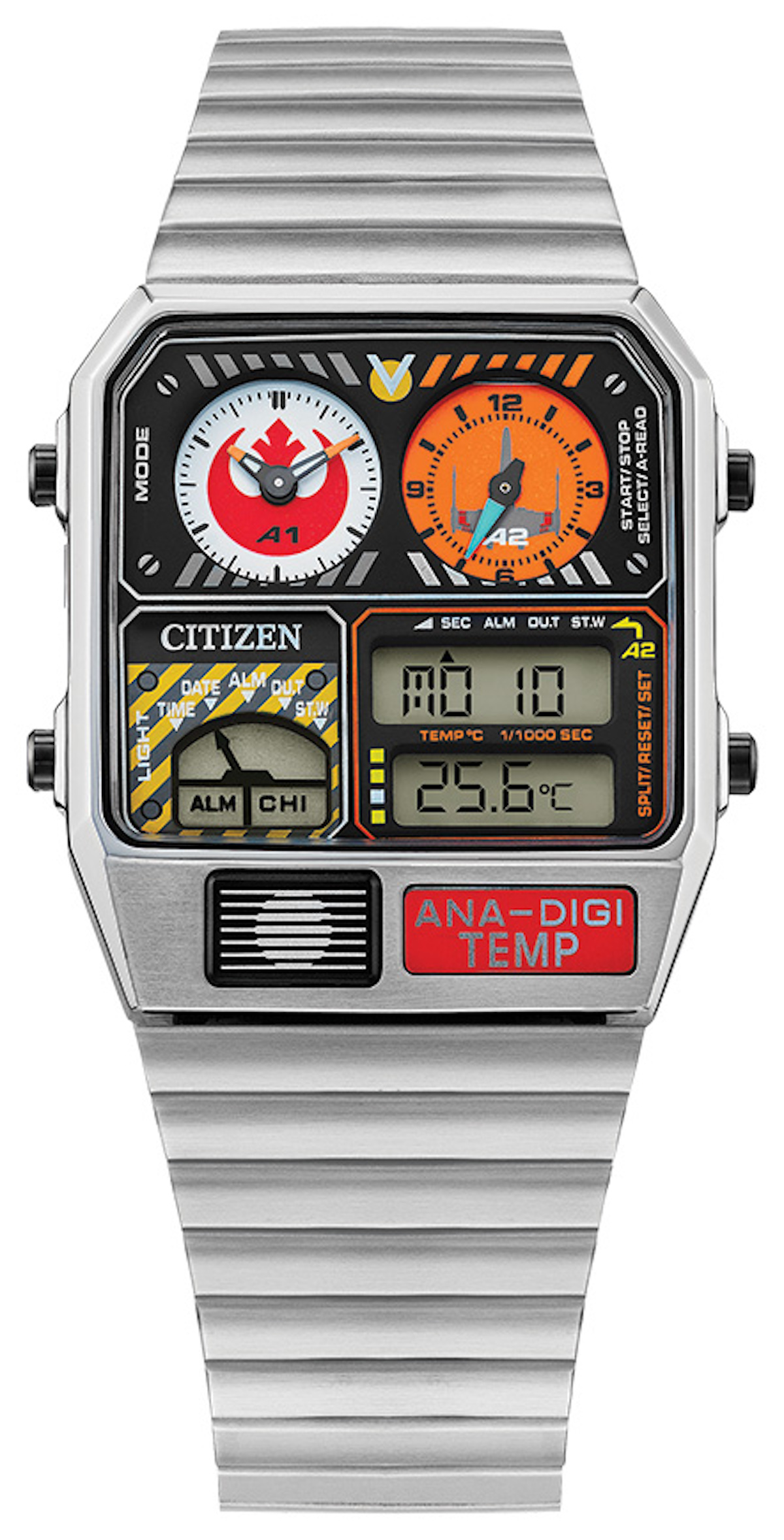 In Fall 2021, four more versions will enter the watch galaxy:  R2-D2, C-3PO, Darth Vader and Boba FettÔ-inspired watches. The R2-D2-inspired watch boasts blue, white  and red colors, along with some distinctive patterns from the droid’s body. The design of the disc-shaped second hand at the top right shows R2-D2 as seen from above and will retail for $350. The C-3PO-inspired watch has two analog dials on the top of the watch, recalling the character’s eyes. It is naturally finished in his distinctive gold color and will retail for $375. 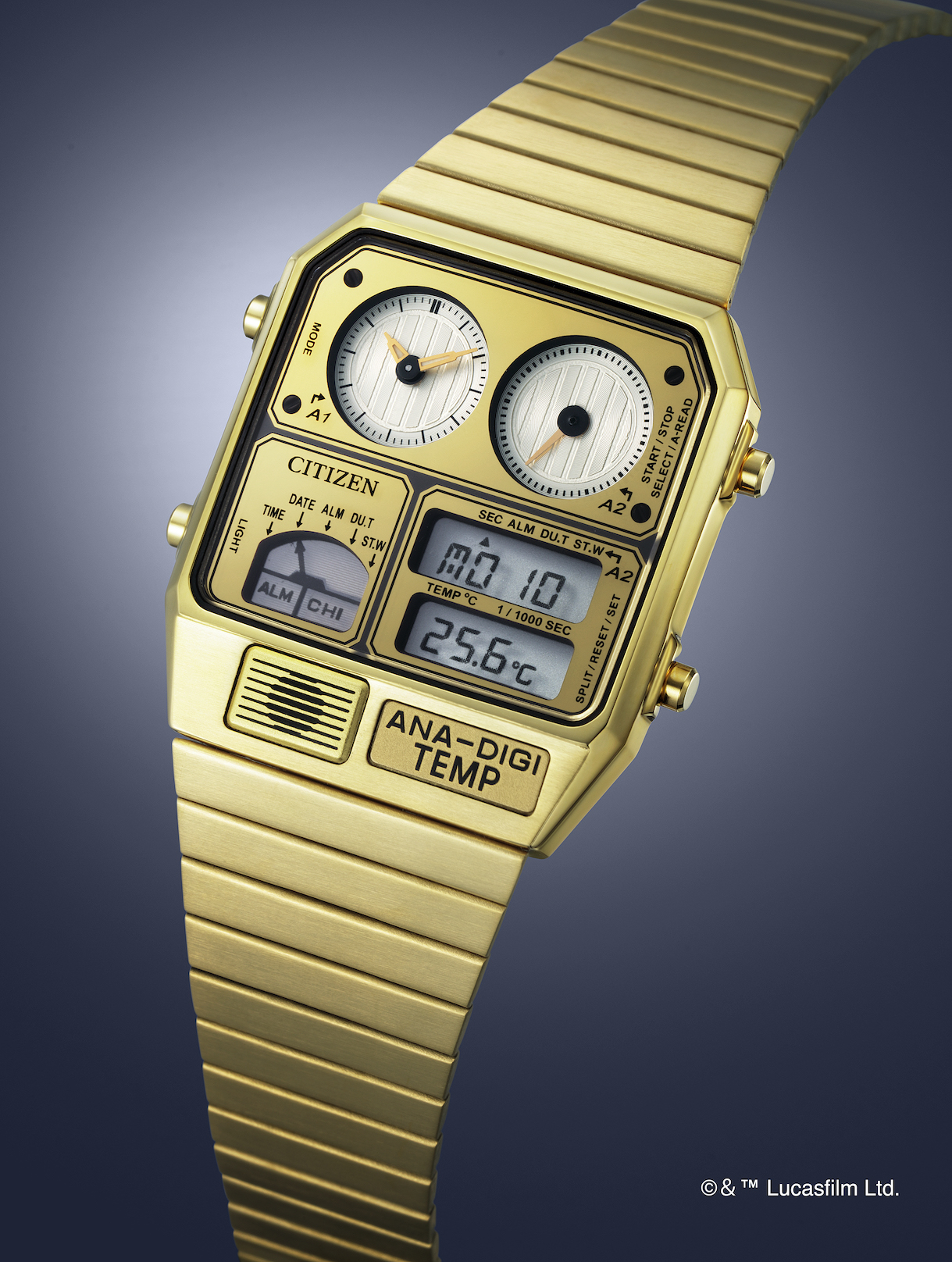 The C-3PO Ana-Digi watch from Citizen honor Star Wars characters will be out in fall, 2021.

The Darth Vader-inspired watch will be made in black — emulating the character’s darkness. The display at the top right features a Death Star-inspired circular second hand with a green superlaser beam indicating each second. The top left dial incorporates Darth Vader’s iconic helmet. This version will sell for $375.  The Boba Fett watch also is in the signature colors and the dial at the top also pays homage to his helmet design, and incorporates the Mandalorian symbol. This watch will retail for $350.

If your favorite Star Wars Ana-Digi character-inspired watch isn’t out until Fall, start your collection anyway with another character because these watches are galactically in demand. 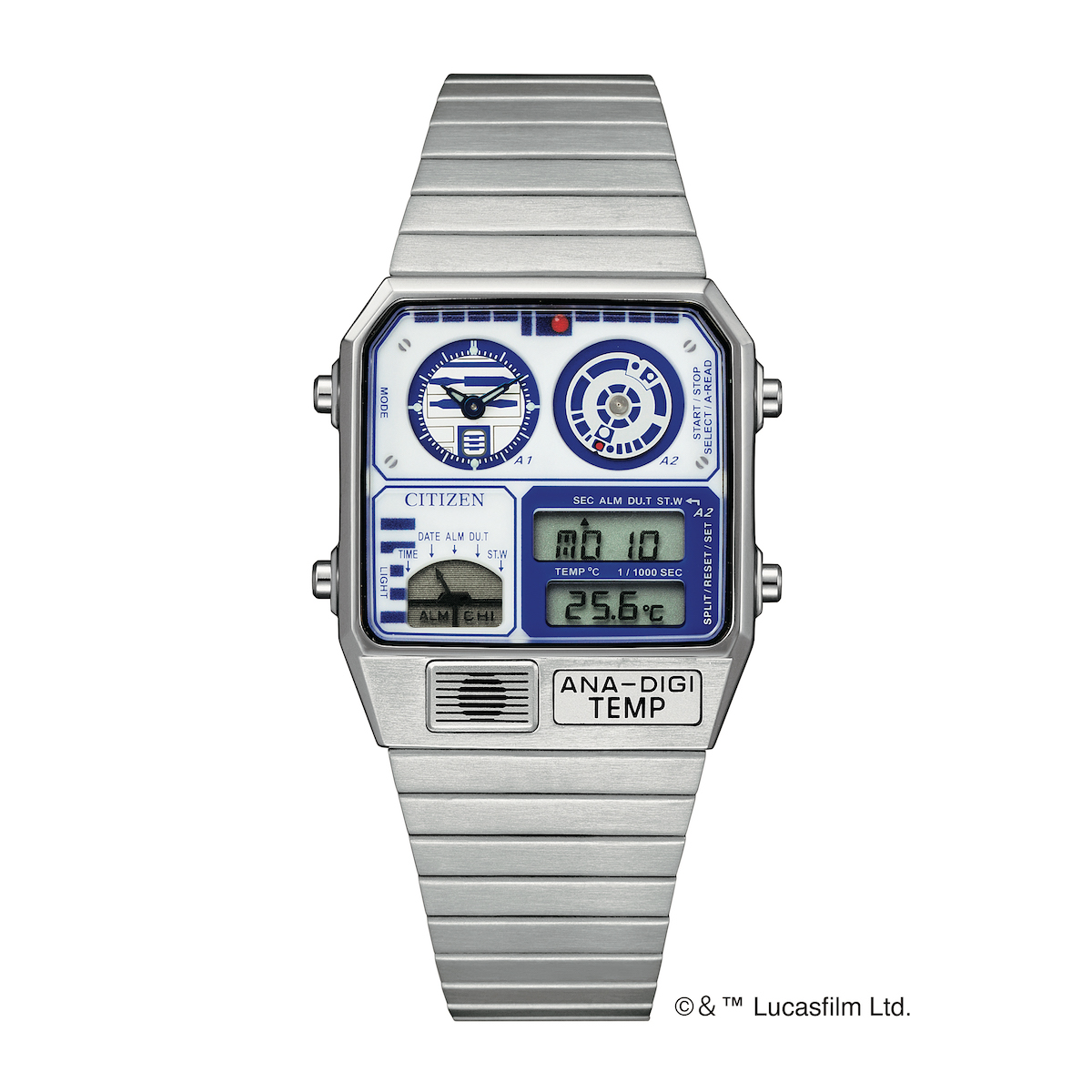 I Went To The Seaglass Rose’ Experience With Corum, Here’s What Happened
May 4, 2021