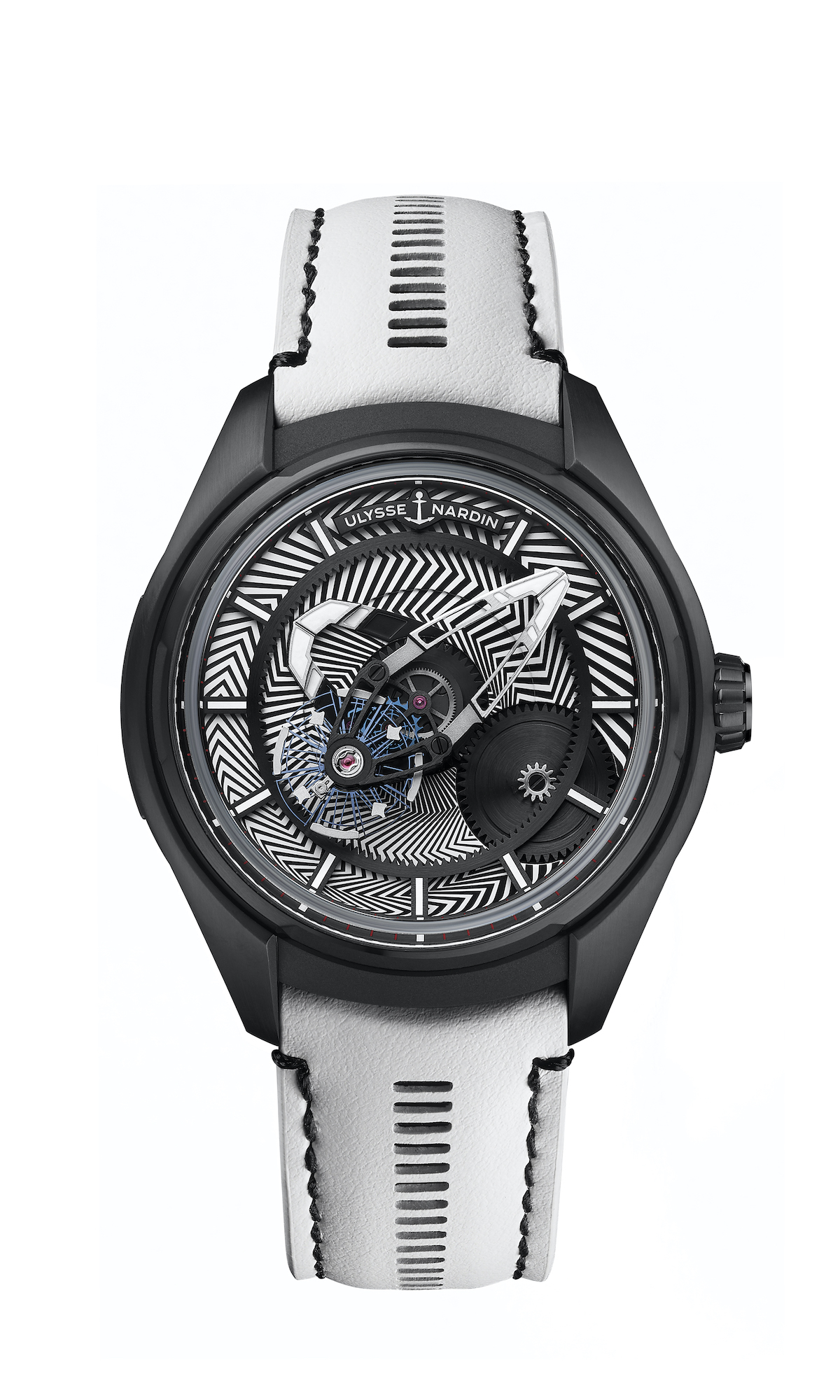 Turning to bold geometric patterns (nothing new to the  brand), Ulysse Nardin unveils the newest Freak X watch: Razzle Dazzle. The new timepiece, created in a limited edition of just 30 pieces, will boggle the mind with its angles, lines and rectangular patterns on the dial. The new geometric watch houses a movement that combines the UN 118 and the UN 250 Freak movement for a new caliber.  in its heart, but the new design motif for the dial is inspired by the ideas of art and camouflaging.

In fact, to create this special geometric black-and-white maze on the dial, Ulysse Nardin’s master artisans employed three different dial techniques.  They include the ancient craft of lacquering, the more current day technique of electroplating and galvanic dial treatments and the very innovative new concept of laser treatments. 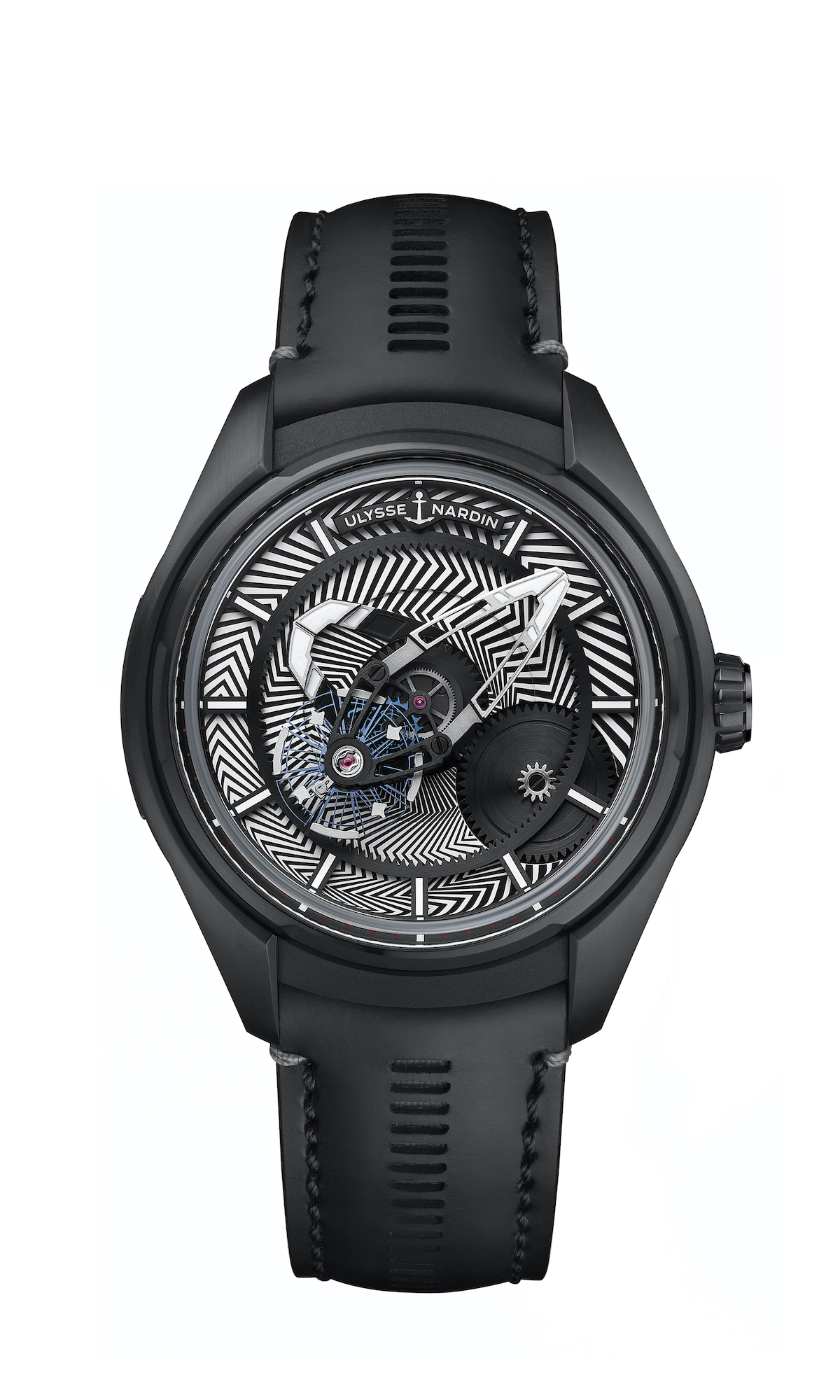 The design of the dial was inspired by the painting technique, often referred to as Razzle Dazzle, used by the British Navy to camouflage British ships. The patterns were used extensively in World War I and to a lesser degree in World War II. The idea there was to conceal the ship as much as possible by using colors that blended into the sea and landscape and by using crossing lines that confuse the viewer and make it more difficult for them to gauge the ship’s range, speed and direction.  Ulysse Nardin uses the technique to make a bold statement rather than to conceal anything.

Powering the 43mm watch is the brand’s Manufacture-made flying carrousel movement, UN-230,  that has been heralded as a true innovation thanks to its looks and its mechanics. The flying carrousel on the dial, which is devoid of hands,  rotates around its own axis. A decorative movement plate integrates the minute gear train wherein the central bridge acts as the minute hand. Meanwhile, the Carrousel, which turns on itself every 60 minutes, features a wheel that indicates the hour. The movement includes an ultra-light-weight balance wheel made of silicium. The movement offers 72 hours of power reserve. 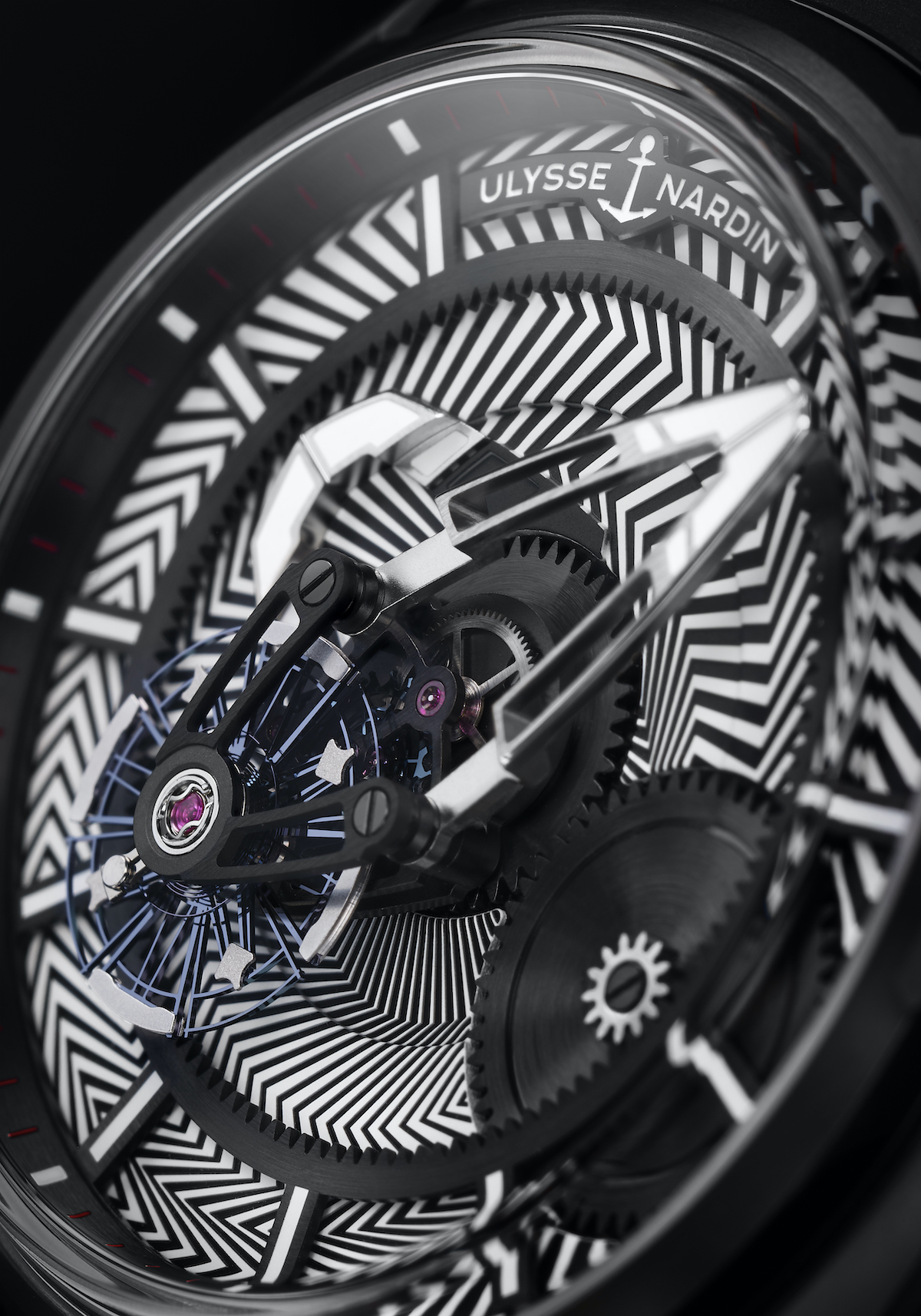 The Freak X Razzle Dazzle watch is crafted in black DLC titanium case with a black open-worked rubber strap or a white open-worked  calfskin leather strap. On the white version, black accents, including stitching and groove openings, carry out the design motif of the  dial. Water resistant to 50 meters, the watch boasts a transparent sapphire crystal case back to allow for viewing of the movement. The watch retails for $27,300.