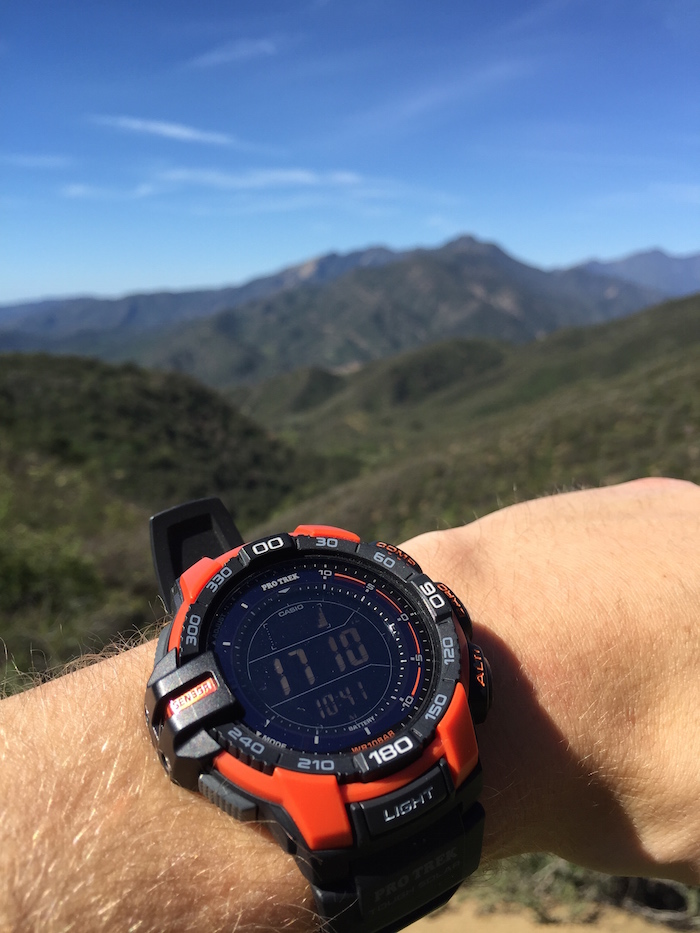 What’s the most important aspect of a watch? It depends on who you are and what the occasion is. For hikers and outdoors people in general its versatility. As with any tool, while on the trail, if its heavy throw it to the wayside, and the more functions it has the better. In the end that means the fewer items you have to carry. Today we touch on a timepiece that is geared for those who love to challenge themselves amongst great outdoors. The Casio ProTrek Tough Solar PRG270-4 is a watch specifically designed with the hiker in mind as it is stocked with an upwards of ten different “modes” to keep tabs on your travels.

Aptly named, this digitized watch runs on a solar powered battery and can last between nine and eleven months on a full charge (depending on what features are being used for how long). It also has a unique feature where it enters power saving mode when stored in a dark place consequently eliminating any worry that this watch would fail you when out on the trail. Weighing in at 67 grams and brandished with a black resin band the comfort and lightweight is perfectly suited for the outdoors.

With the battery power and comfort covered its time to explore the many features and functions that make this watch exciting, and at times overwhelming. Some of the more basic modes include, world time mode (which can cycle through thirty-one different time zones with forty-eight different cities), a stopwatch, a countdown timer, and an alarm. There is also a current time mode which includes the date and time in hours, minutes and seconds. 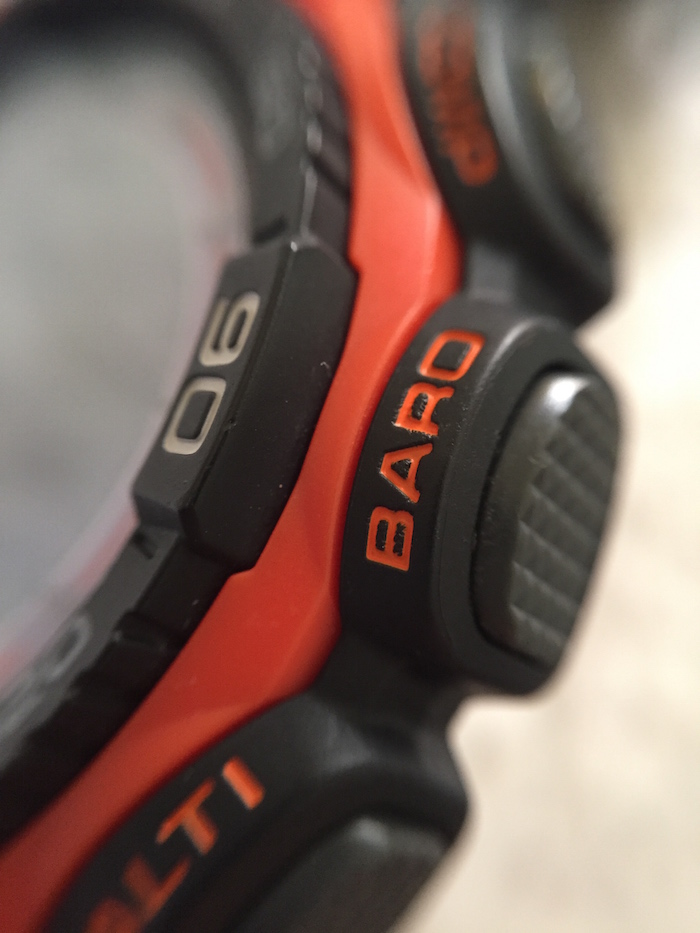 Once you designate your current location (chosen from one of the forty-eight city codes) you can accurately view the sunrise and sunset times for the current date as well as any future date. If you aren’t in one of the forty-eight cities listed you can manually set your latitude and longitude to ensure a more accurate measurement (however, the sunrise/sunset time is measured as though at sea level as opposed to altitude). All of these modes are effortlessly cycled through using the easily identified “adjust” button. If these features alone didn’t make you feel that this watch is fully stacked then read on!

What sets this watch apart from other digital outdoors pieces is Casio’s new ProTrek V.3 Triple Sensor Engine which is embedded into the side casing. This sensor is actually comprised of three miniature sensors providing this watch a functioning compass, barometer, altimeter and thermometer. All of which are accessed with their own corresponding “COMP”, “BARO”, and “ALTI” buttons along the outer edge of the watch. The science behind this sensor is actually very intriguing and is quite accurate as long as the proper calibrations are set manually before hand. You can read more about the technology inside the Triple Sensor Engine here. 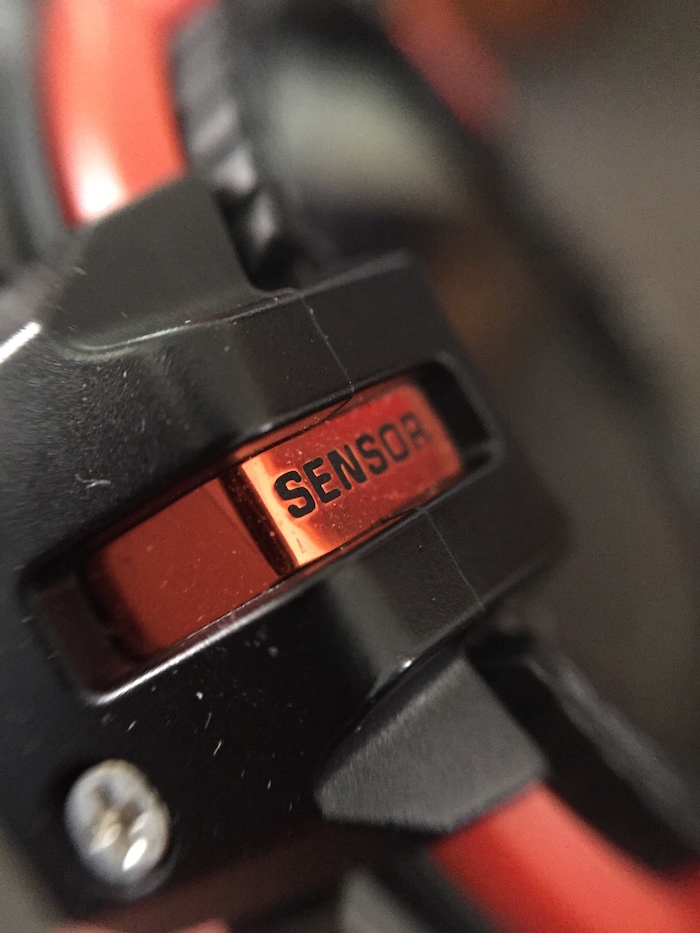 The altimeter is measured in either feet or meters and ranges from -2,300 to 32,800 ft. It has a selectable measurement interval of 5 seconds or 2 minutes and allows you to record your elevation change throughout your hike which is stored in the watch and accessed at a later date. The compass in the watch will give you a one, two or three letter code telling you your direction (W, SW, SSW) as well as a directional degree (between 0 and 359) which is indicated by an LED graphic direction pointer around the bezel. The barometer, measured in either hPa/mb or inHg and ranging from 7.65 to 32.45 inHg and takes readings every two hours and can also store its readings in the watch. The thermometer reading sits at the bottom third of the window while in the barometric mode.

At first a bit overwhelming a little time exploring the watch’s features allows your excitement to run rampant.The Protrek Solar Tough PRG270-4 has some other features like its full automatic calendar which is programmed up to 2099 and is accurate to  +/- 15 seconds per month. However, my personal favorite is the auto light feature. This intuitive technology can sense that when you flick your wrist to glance at the time the initiating the backlight to illuminate. This feature can be turned off, but I find it really comes in handy if you’re ever working on something that requires two hands. 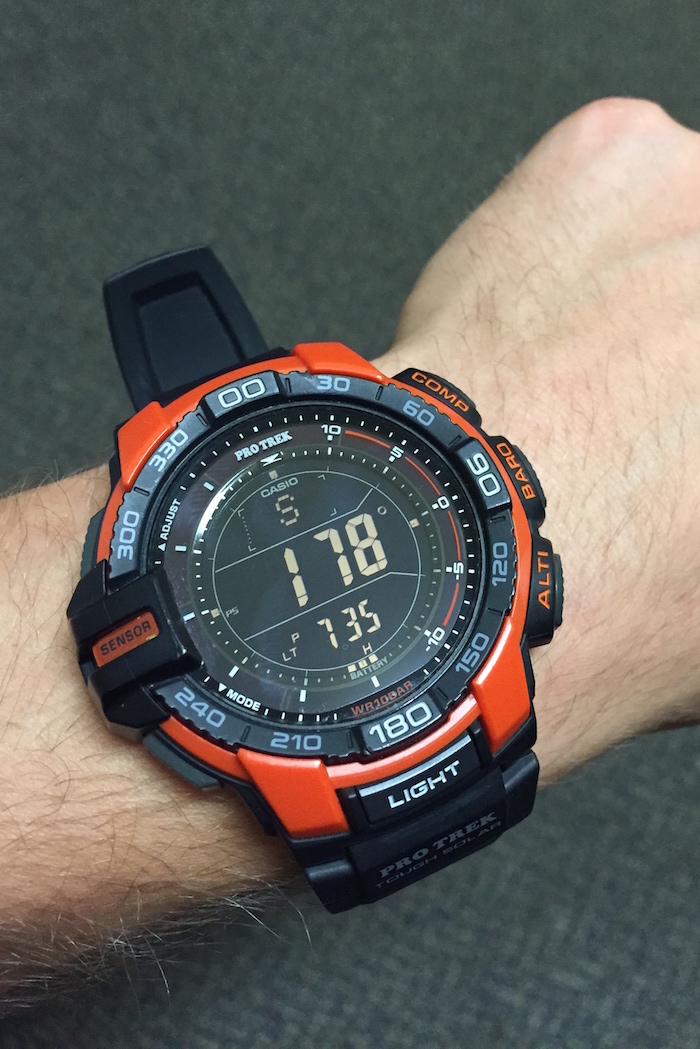 Plain and simple, this watch gives you a lot of bang for your buck. Ringing in at just $180 you not only do you get a durable digital watch, but you get all of the spectacular features that come with the ProTrek V.3 Triple Sensor Engine. It may take you a bit of time and some reviewing of the owners manual to become well-acquainted with the ins and outs of this watch, but in the end it’s rewardingly worth it. With Casio’s most recent partnership with Charles Scott, the “Family Adventure Guy” and athlete, the ProTrek models are becoming increasingly more and more suitable for an outdoors lifestyle.  So, whether its for a timed run, or a 5 day backpacking trip, the Casio Pro Trek Tough Solar PRG270-4  is the perfect utility tool to provide accurate measurements for more than just the time.  You can click here for more information about Casio’s ProTrek Tough Solar. 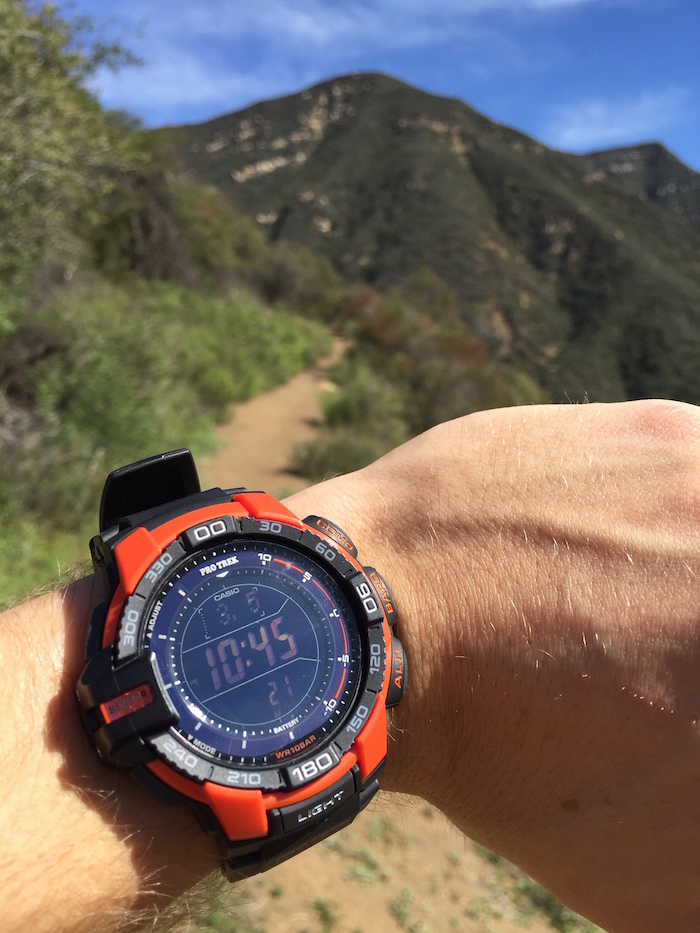 On the trail with the ProTrek Tough Solar PRG270-4

I Went To The Seaglass Rose’ Experience With Corum, Here’s What Happened
April 1, 2015