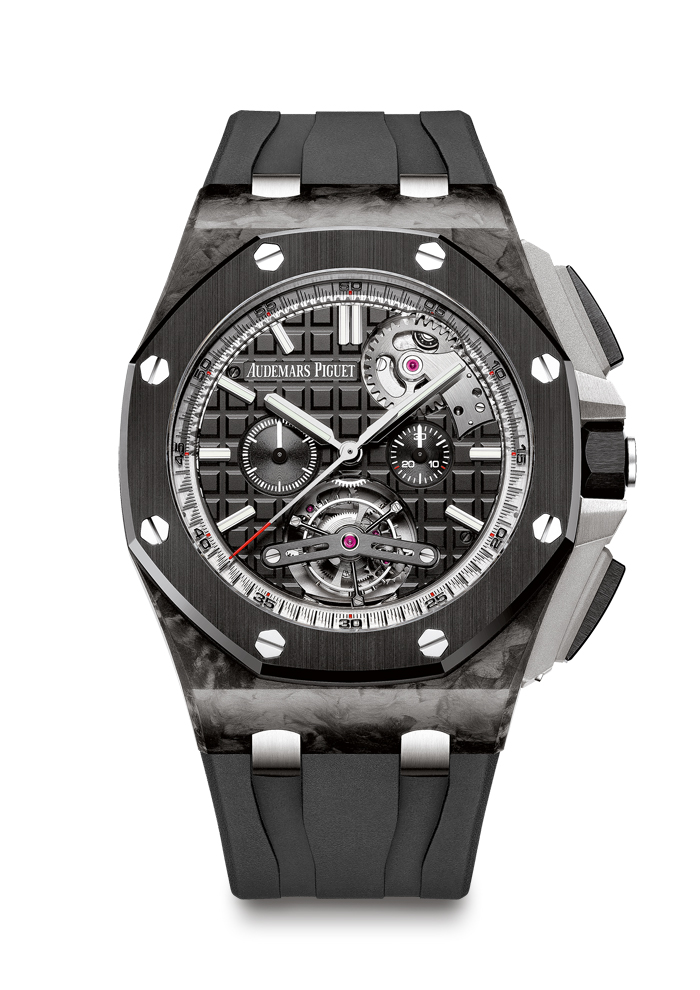 For the second year of the Watches and Wonders Hong Kong horology fair, coming up late in September, Audemars Piguet is back — in a big way. The brand will be officially unveiling the new, ultra haute horlogerie piece: Royal Oak Offshore Selfwinding Tourbillon Chronograph. Created in a limited edition of just 50 pieces, the watch is a cutting-edge horological creation that will introduce an all-new echelon in the offshore collection. Not only will this new ROO represent the brand’s enthusiastic use of alternative materials such as forged carbon for the case and ceramics, but also it reminds us of the manufacture’s exceptional, traditional watchmaking expertise. 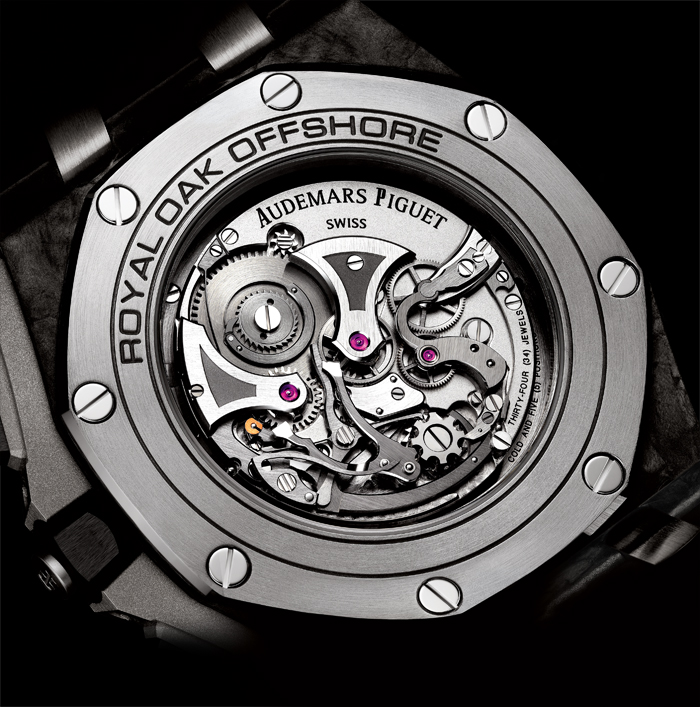 The 335-part movement was created by APRP.

If ever there was a great example of inner beauty, this is it. Audemars Piguet has commissioned Renaud & Papi, the AP owned, high-end movement maker, to produce the new Calibre 2897 for this piece, and APRP has surely delivered. The 335-part self-winding movement features the rare combination of a peripheral rotor and a tourbillon (both of which can be seen through the semi-exposed dial), alongside a column wheel chronograph. The automatic winding mechanism is essentially driven by a 180-degree peripheral 950 platinum oscillating weight on ball bearings. The design of this timepiece shifts the rotor to the outer edge of the movement to improve winding speed, efficiency and precision. 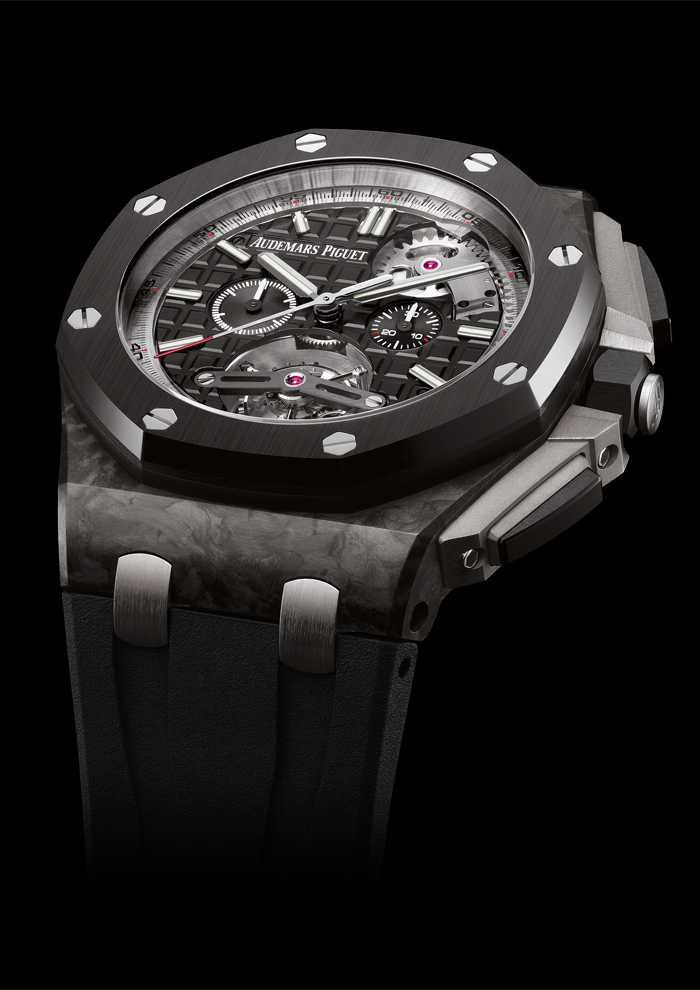 The watch case is made of forged carbon fiber with ceramic accents.

This concept, combined with the tourbillon, is a combination of complications that is definitely uncommon and rather surprising. In addition to the mechanical complexity, no expense was spared in the finishing department, as the caliber impressively features a wide array of sandblasted, polished, and brushed finishes. The workmanship involved in this endeavor takes hundreds of hours and easily contributes at least 30 percent to the watch’s value. (You can read more about Audemars Piguet’s craftsmanship here.) 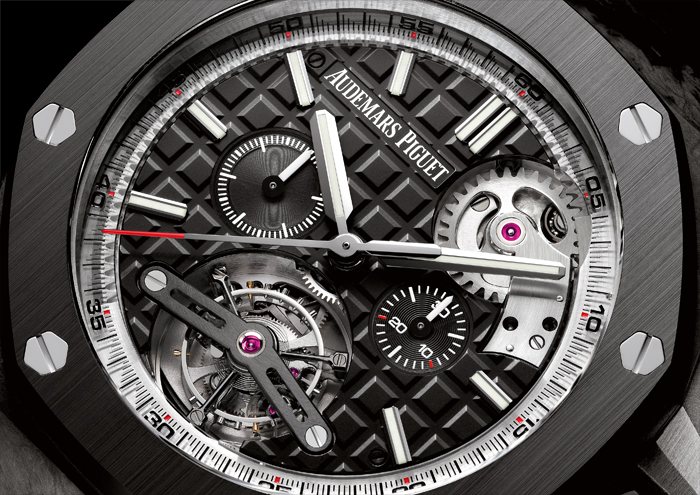 The tourbillon escapement is visible and is complemented by the Tapisserie dial.

From a casing perspective, this piece is quite reminiscent of the brand’s current 44mm offerings. It incorporates black ceramic pushers, bezel, and crown with titanium crown and pusher guards, all integrated by a forged carbon midcase. Aesthetically, the watch takes strong design cues from the 2011 forged carbon Offshore, which has become one of the more harder to find ROO’s.

The Royal Oak Offshore Tourbillon Chronograph certainly embodies the Offshore collection in a much more horologically advanced and forward-thinking fashion, through its contrast of haute horlogerie and aggressive, sports-oriented materials and aesthetics. We here at ATimelyPerspective are excited for the release, and believe that it will gain the Offshore collection a whole new level of reverence. 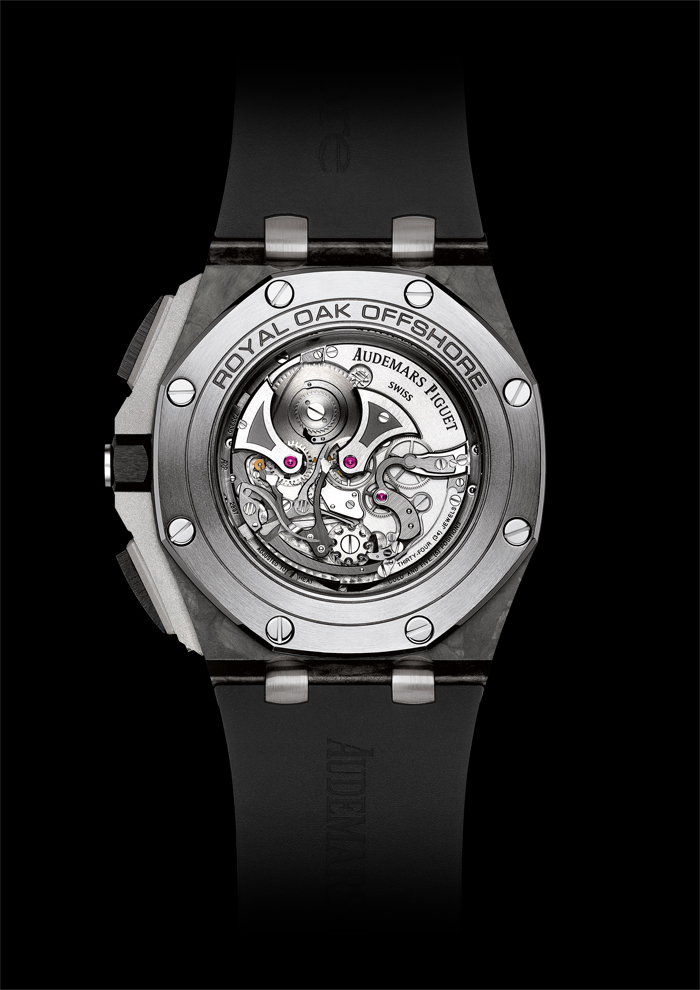