Around the World: Watch Execs Celebrate Jewels of Time Book at Historic 21 Club 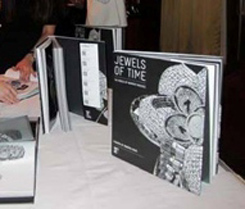 Last Thursday, I had the distinct privilege of spending a few hours at the renowned and historic 21 Club with more than a hundred of the top watch brand executives – in celebration of my new book, Jewels of Time, the World of Women’s Watches. The party, sponsored by Niche Media, for whom I write

hundreds of watch articles annually, was a resounding reflection on how important women and women’s watches are in the world today.

When I first began writing Jewels of Time, published by the successful Patrice Farameh of Farameh Media, I really had to reflect on women in time. The book was a celebration not only of the watches built for women, but also of women themselves. While I paralleled the growth of women in the 20th century with the expansion of superb women’s timepieces, I couldn’t 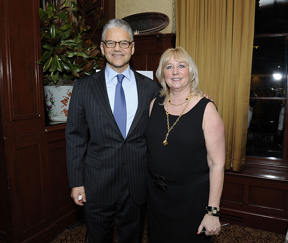 Efraim Grinberg, CEO, Movado Group, with Roberta Naashelp but realize how far women have come. Today, women have gone from playing a backseat role, to being empowered individuals who want a strong watch on their wrist—not just a beautiful one, but one of substance like themselves. 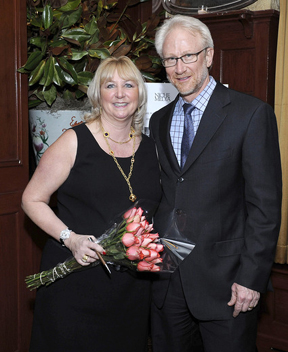 Roberta Naas, author (wearing a Harry Winston Premiere BiRetrograde watch) with Ron Jackson, President of Franck MullerThe writing of this book also made me look back on my nearly three decades of watch journalism –wherein I began as the first woman watch editor in the field – breaking down “boys club” mentalities and pioneering a new path. At any rate, the celebration Thursday night was a wonderful event that made me further recognize that not only have I carved inroads in this watch family of mine, but also, so many people have grown to embrace the beauty of women and time. Bravo and thank you to the entire industry for all of your support, and thank you so much to those of you who signed my book for me!