Around the World: F.P. Journe Previews Octa UTC in US Market 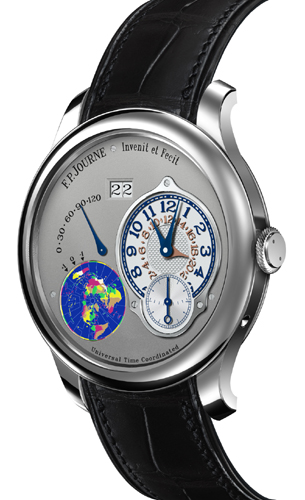 At a special preview this morning at the F.P. Journe Boutique on Madison Avenue in New York City during this week’s Madison Avenue Watch Week,  Journe unveiled the  Octa UTC, Universal Time, Coordinated watch.  Released to the world earlier in the year in Geneva during the SIHH,  this is the first time it is available in the US market.  This watch revolves around the concept that came into place in 1972 and is known as UTC (Universal  Time Coordinate) – which is based on atomic international time.  In this newest  Octa UTC®, F.P. Journe  offers a patented system that indicates mechanically the different time periods linked to the earth’s geographical positions, indicating summer and winter hour.  Two hands are used to indicate time in two zones. Blue hands display the main time and are linked to the calendar, while the rose-gold hand indicates the secondary time zone on a 24-hour indicator.

The mechanical movement with automatic winding is manufactured in 18K rose gold, like all F.P. Journe creations. It is constructed on the 1300.3 calibre, and offers an additional complication. The dial features a retrograde power reserve, a large date, and for the first time, a dial with the earth divided in time zones. The passing of the months from 28 to 31 days is done manually. The OCTA UTC also features the 22K red gold exclusive off centre rotor that winds in one direction only, thanks to a self-blocking ceramic ball bearing exclusive system. This watch retails for $51,370 in platinum, or $44,420 in rose gold. 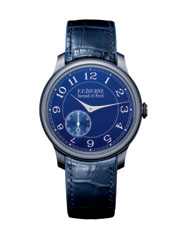 Journe also re-emphasized the beloved Chronometre Bleu today, which was first shown to the world in December 2009, but is now fully available for sale in the boutique.  The Chronometre Bleu ($18,300 retail) features a stunning blue dial and is crafted in rare and precious Tantalum.  F. P. Journe offers watch lovers a chance to own one of the most coveted timepieces in the world – as this master watchmaker’s prowess and reputation go down in the historic annals of time.