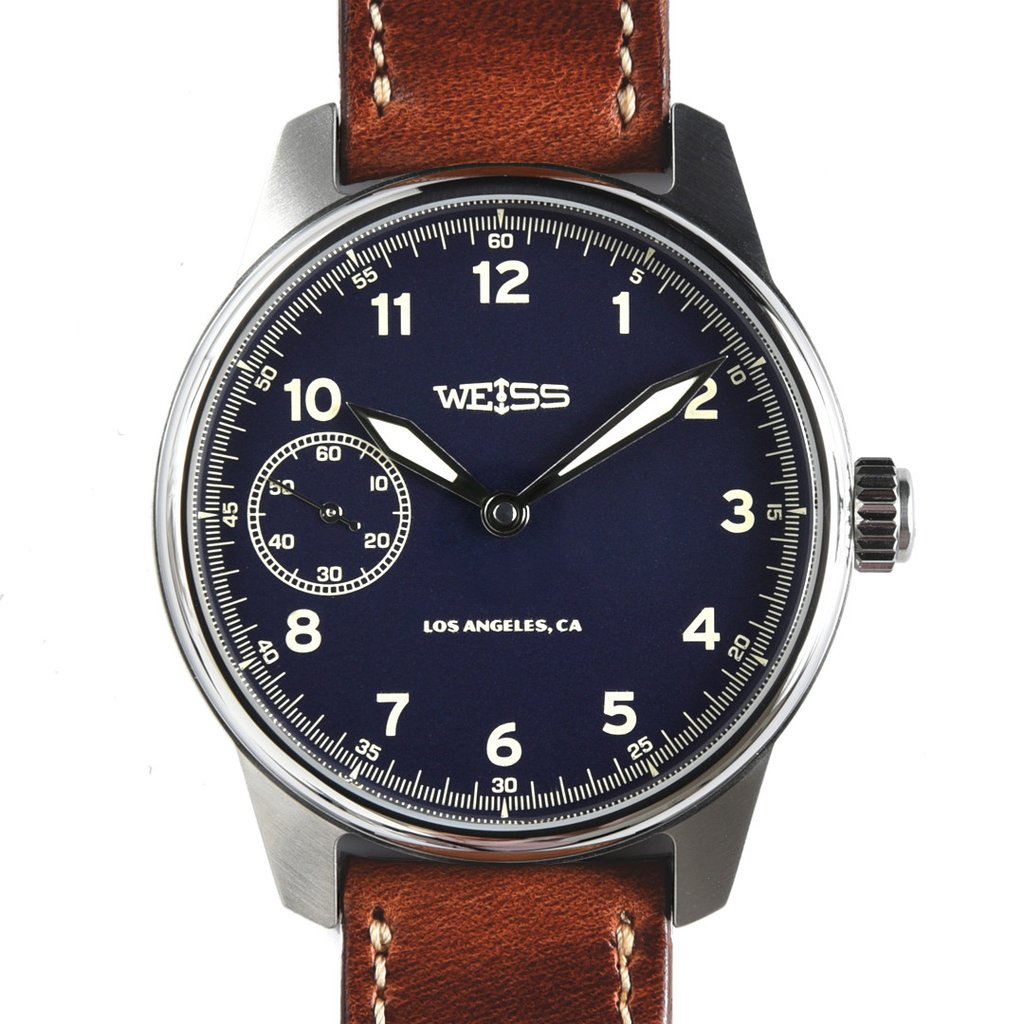 With America’s Independence Day around the corner, we thought it a good time to take a look at an American watch brand.  Weiss Watch Company is looking to shift the conversation about fine watch craftsmanship to the United States, and restore prestige to American watchmaking. The four-year young brand designs, builds and assembles its watches by hand in Los Angeles. The brand, with several   collections, regularly unveils new pieces such as the recently announced 200-piece Limited American Issue Field Watch in Blue.

The Limited American Issue Field Watch in Blue is built from scratch, one at a time by master watchmaker Cameron Weiss. The blue dial of this new piece was inspired by the deep blues of the Pacific Ocean that Weiss surfed while growing up in California. For the current limited edition release, Weiss is even offering to personally hand engrave each piece. The Limited American Issue Field Watch in Blue is powered by the manually wound Caliber CAL 1003 with 46 hours of power reserve (displayed on the exhibition case back). Caliber 1003 movements are manufactured and assembled from US and Swiss parts, and designed for everyday wear. Each movement also features incabloc shock protection to protect the balance wheel pivots. 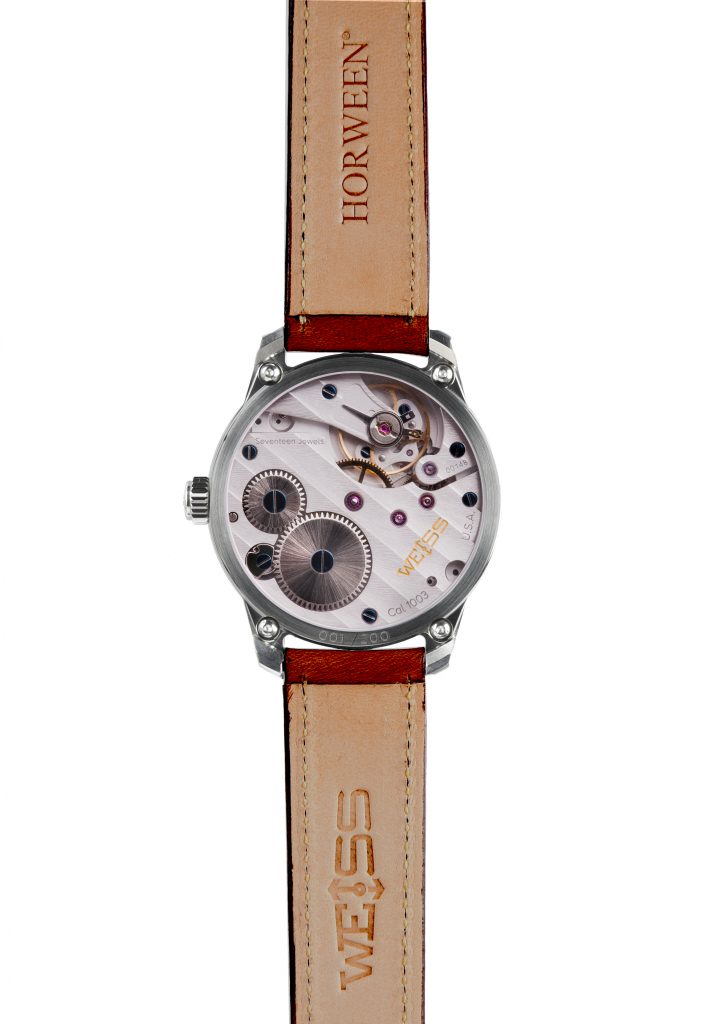 Just 200 pieces of the American-made Weiss Limited American Issue Field Watch will be made.

The rich blue dial on this edition is machined from naval brass and hand painted in blue with latte accents. On the dial of the watch you will find hours, minutes and sweep second hand at 9:00 with hacking feature. The hands of the watch are treated with Super-LumiNova for added legibility. The case measures 42 mm and is crafted in 316L stainless steel and, in keeping with the Made-in-America initiative, the watch comes on a brown leather Horween strap. Horween is the oldest leather tannery in the United States. Each watch is individually numbered and sold in a California pine box made in the US of A.

The field watch represents a staple look in a watch collection, and is equally at home with a suit or worn while hiking on the weekend. I am glad to see American watch craftsmanship in a horological interpretation that is easily accessible by the masses, but also offers a narrative that will attract even the most seasoned and snootiest of horologists. Due to the hand-made work inherent in these watches, each one will ship in about 4-6 weeks’ time from order. It retails for $1,995. 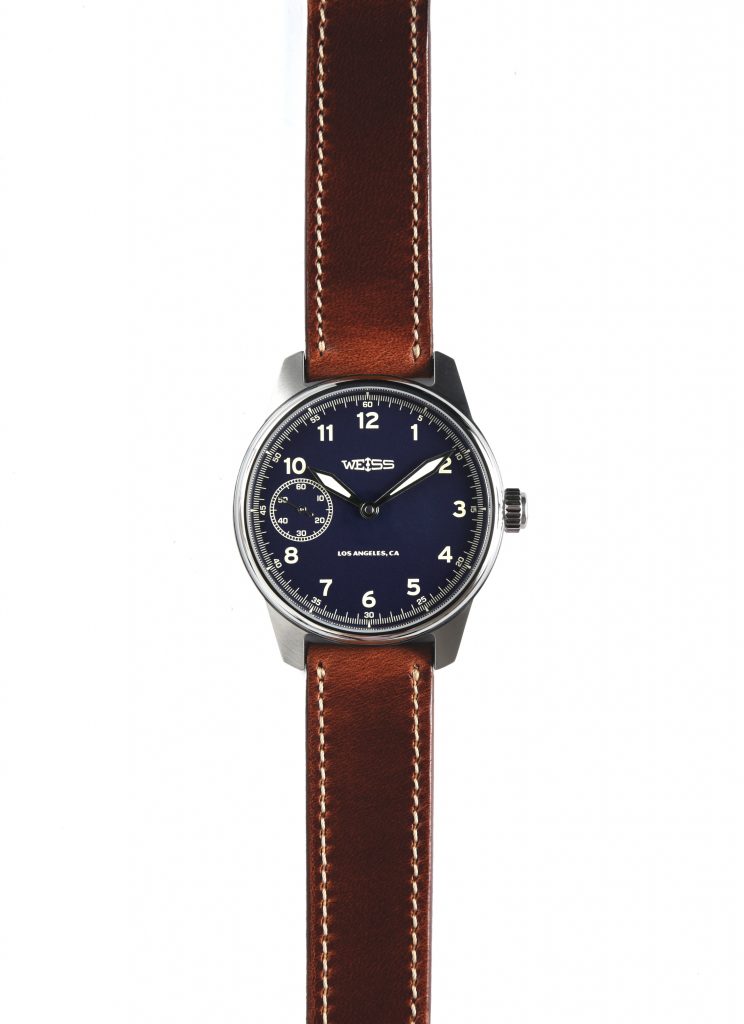 Cameron Weiss, native Californian who graduated from the Nicolas G. Hayek Watchmaking School as a WOSTEP Certified Watchmaker, started Weiss Watch Company in 2013. His resume includes a who’s who among the great watch manufacturing houses, with training at Audemars Piguet and Vacheron Constantin.

Weiss Watch Company designs and engineers each timepiece in house. Engineering documents are created to translate each sketch into a part to be machined. Components are initially produced, as prototypes to ensure fit and tolerances are correct, then inspected with equipment able to measure to 1/10th of a micron in order to ensure proper fit and functionality prior to assembly. Cases, crowns, and buckles are machined from single blocks of 316L stainless steel, allowing the best corrosion resistance and finest degree of finishing. Dials are made from a special brass alloy, machined from solid brass to prevent weak points. Final dials are painted first with color and then with text. Indeed, the process from start to finish is wrought with thought and attention to detail.