Sebastien Loeb is not only the world’s only seven-time world Championship rally winner, but also he is Marvin Watch ambassador and co-designer of the brand’s newest Loeb watch. The Loeb automatic chronograph (with seven stars on the bezel to represent his seven wins) retails for approximately $2,520, while the quartz version sells for about $830. Here, Loeb talks with us on driving and designing. 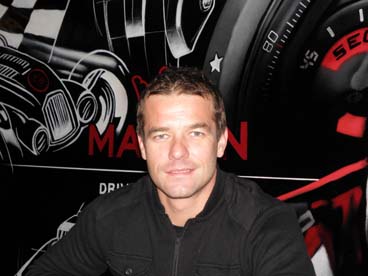 RN: Tell us a little about how you got in to rally driving and what it takes to do it?

“I was older when I started driving. I was 22. I didn’t grow up around it, I discovered it all by myself when I was around 18 and I had my own car. I started driving in little rallies at 22 and then in more rallies and then finally when I was 27 I competed seriously and then when I was 28 I won my first rally. I will always remember the first rally, the first victory. It was very special to me. Then I won seven years in a row! I think that driving is a question of feeling. You need to have a natural feel for it – it comes from inside and is natural. If you don’t feel it right away when you are behind the wheel then it won’t come. Then, to race, you need a good team behind you. Everything has to be perfect.” 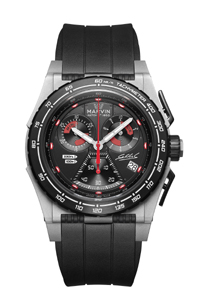 RN: Just recently, you won your seventh championship, how did that feel?

“This one was perhaps most special because it was a victory in France, in my home country, in front of my family and my friends. Even though it was a world rally, it was special to be at home.”

RN:  How did you come together with Marvin to make a watch?

“We had a mutual friend who brought us together and I liked their ideas and they were going to let me help with the designing so that it could be my watch too. We tried to find looks from the car to put into the watch design — the pedals, the springs, suspension, engine details. I am satisfied with it. The automatic is still a work in progress, and I am especially happy with the quartz version. I love the sandblasted steel, too.”

RN: In the ad campaign, it shows you and your team working on the car and says “Loeb not included.” What did you think of the ad for the watch?

“I was very happy with it. We worked together on the watch for a year to get it from zero to the draft to the final product and perfect in the design and finishing touches, so the ad had to look good and be catchy, too.”