Incredibly genuine and affable, Nick Stellino has a style all his own. Whether in a meeting, on the stage, or in the kitchen, Stellino commands attention. Presented with the Most Humanitarian Chef Award by the American Red Cross, Stellino has a vivacious and successful television cooking show on national public television, Nick Stellino Cooking with Friends, has authored several books, and regularly does motivational speaking.  Stellino’s style and grace are inspirational. In addition to family and food, Stellino has a strong affinity for fine watches. He owns dozens of them, from inexpensive to top of the line, and has even built a timepiece, working with Maurice Lacroix. 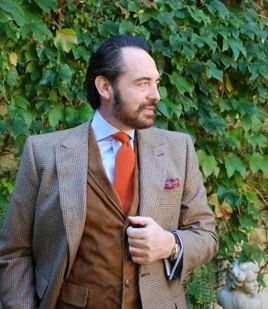 “My love for watches started as a child. When I was born, to celebrate, my father bought a steel Omega with gold hour markers on it. When he had to leave on a business trip, he handed me his watch and told me to wind it seven times and he would be home. I remember how special it was to me to wind the watch, to hear the gears and the ticking.”

That love of mechanical watches stayed with him. “My first good purchase was in 1982, when I was 24. I bought a Rolex watch in Geneva. I had been romancing that watch for so many years and was looking forward to purchasing it. I remember while I was looking at it in the store, a group of Chinese tourists came in and the sales person abandoned me. They were buying gold Rolexes like they were going out of style and my steel underwater watch purchase was insignificant. It was the most anticlimactic purchase ever. “

Still, this didn’t daunt Stellino’s spirit.   “I formed a love affair with the people behind the scenes, the watchmakers and artisans, who stand as dreamers with ambition.”

Stellino loves meeting people and brands. Among the standouts for him: independent watchmaker, Peter Speake-Marin. “Peter has formed a relationship between himself and the watch; he’s found an easy approach to significant problems and formed a vision about how the watch should be built.”  Stellino also talks of meeting the legendary late Gerald Genta, and of their discussions about family, legacy and time concepts.

What‘s Stellino’s favorite watch?  A Franck Muller Master Banker that served as an amulet to him, to forge ahead, to rise to the challenges of building a new future. “I bought it at a time when I had barely the money to pay for it.  Dreams of a better future were the only asset I truly owned and that watch on my wrist told me every day that ‘Time waits for no one! What are you going to do today to change your future?’ The most precious asset of our life has nothing to do with money; it is about what we do with our time… starting right now.”