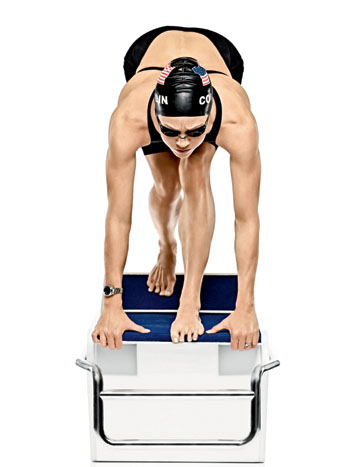 Natalie Anee Coughlin, photo courtesy of OmegaAmerican international swimmer and 11-time Olympic medalist, 30-year-old Natalie Anne Coughlin was the first American woman athlete to win six medals in one Olympics. She also is the first woman to ever swim the 100-meter backstroke in under one minute. As a member of the 2012 United States Olympic team, she took the bronze medal yesterady in the 4×100-meter freestyle relay event. Her twelve Olympic medals tie her with Jenny Thompson and Dara Torres for the most all-time by an American woman.

She is also an Omega ambassador, which brings us this moment in time with her as she discusses determination and competing.

Q.   What goes through your mind or what do you try to focus on in those seconds just before the start of a race?  What are those moments like just before you compete?

Q. After incredible success in Athens and London, you’re poised to make history of your own in London.  What does it mean to you to be part of your third Olympic team and with one more Olympic medal have the chance to become the most decorated female swimmer in history?

NC:  There is some potential for me to become the most decorated female athlete in history, which is crazy and mind boggling that I am even in that position. … I hope to earn a medal in all my events.  I hope to get that goal, but I’m just trying to focus on one event at a time. 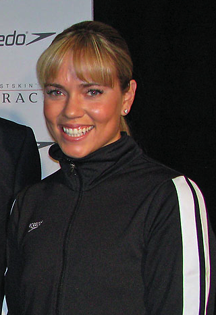 Q.  What would you consider your greatest moment in time?

NC:  I think my greatest moment in Olympic history has been repeating my Gold medal in my 100 backstroke.  Going into that race, I had a lot of pressure placed upon me and a lot of people didn’t think I was going to win or had the ability to win.  I was determined to get my hand on the wall first and I actually did.  I am very, very proud of that moment.

Q.  What is your favorite memory as a fan?

NC:  I have two favorite Olympic memories.  One involves Michael Phelps when he beat Mike Cavic in the 100 fly.  That was the one night I actually got to watch from the stands, that I wasn’t swimming myself.   We were all watching that race and it came down to the finish. . .. That was one of the most exciting races that lead to his eight Gold medals.  It was pretty incredible to watch it in person.