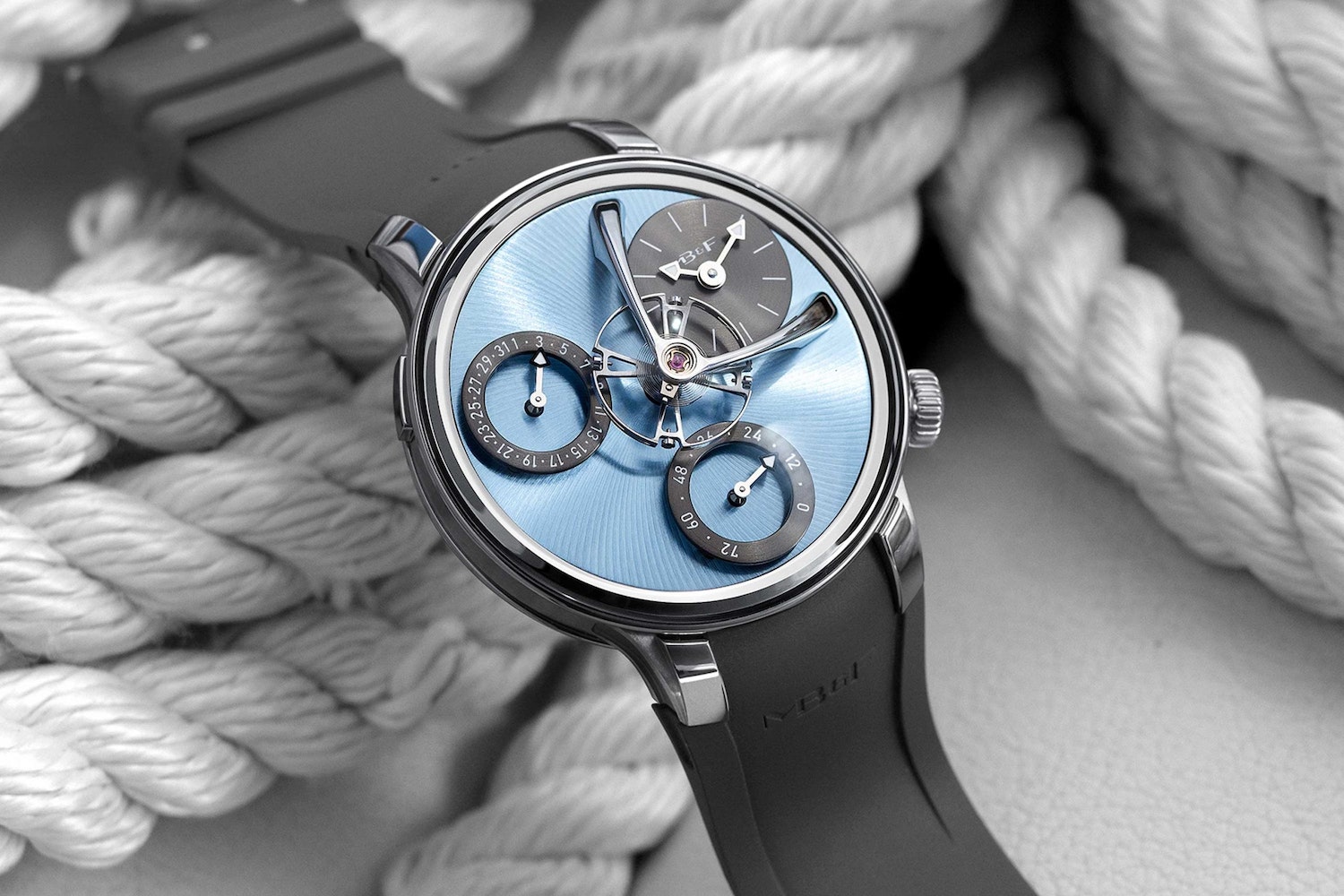 As I was writing about this watch, though, it dawned on me that even though so many watch lovers are familiar with the outrageous three-dimensional MB&F watches, many may not really grasp the powerful mechanics and abilities it takes to build them. Here, we break down the elements of the LM Split-Escapement EVO to help gain a better understanding of just how special it is. 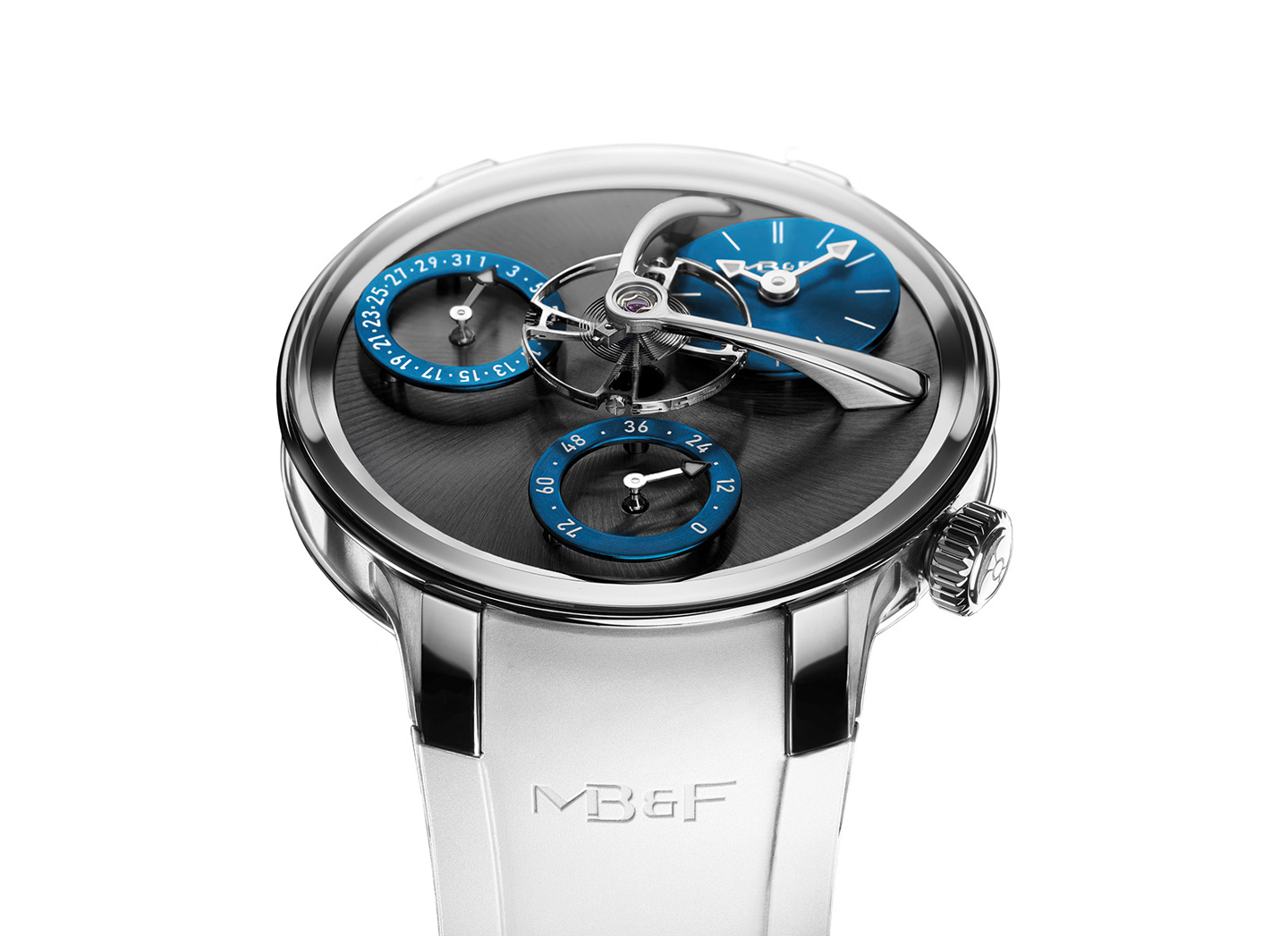 This timepiece, which is the brand’s fourth watch to be housed in the EVO case, firmly establishes the EVO as a line in and of itself. The first EVO case was unveiled to the world in 2020 and was an evolution of the round Legacy Machine case that is geared for active lifestyles.

The complex  movement is suspended inside the EVO case using a mono-block “FlexRing” shock-absorption system that was a world premiere when it made its debut.  The FlexRing absorbs shocks, making the watch highly wearable. The Evo case also  boasts 80 meters of water resistance and integrated rubber strap. It was the case the brand opted to use when it unveiled its first-ever chronograph watch, the LM Sequential EVO, earlier this year. 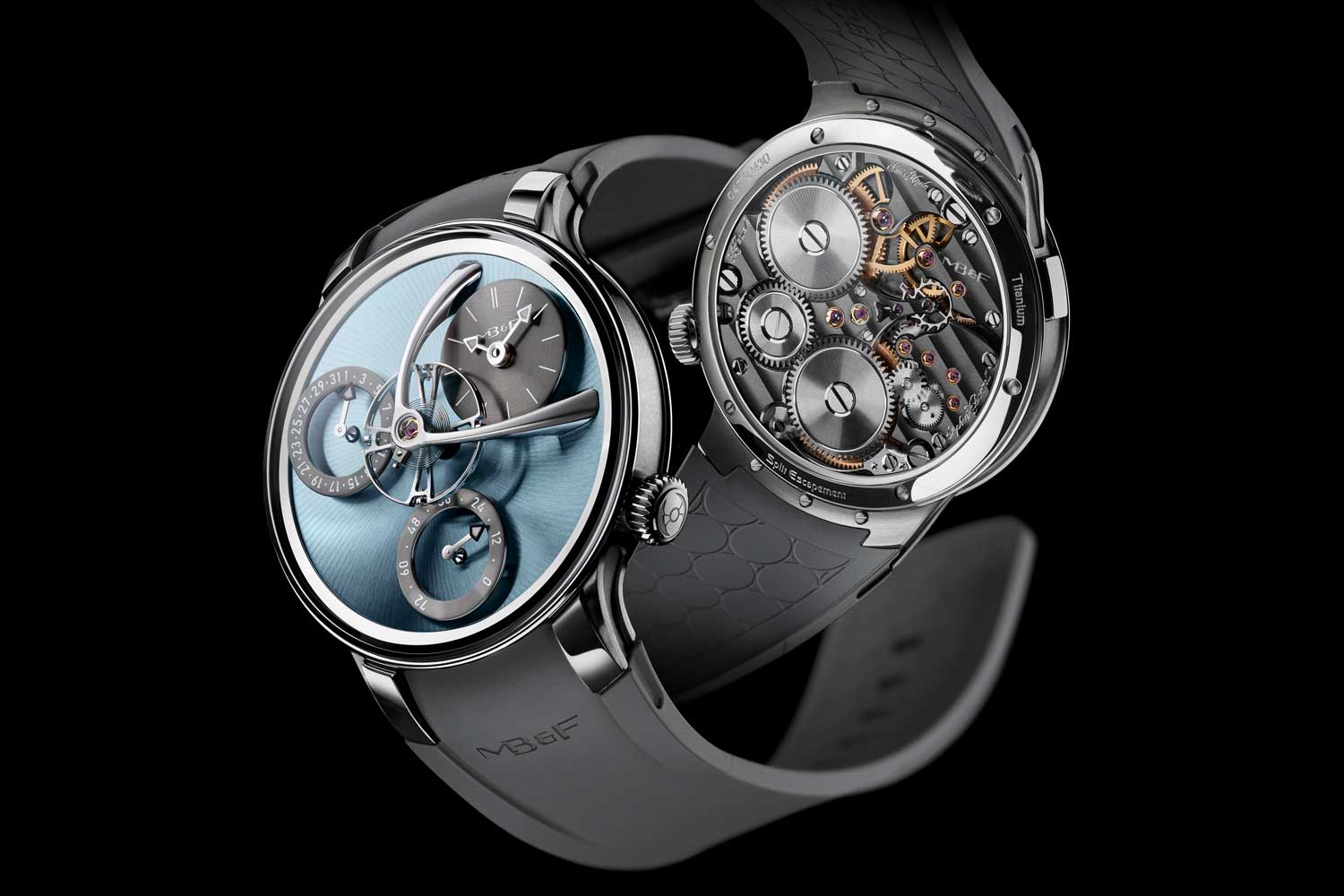 The MB&F Legacy Machine Split Escapement EVO watch boasts an escapement that is split, with the balance wheel on the dial side and the rest of the escapement behind it.

The newest watch unveiled today, though, combines the EVO case with the incredibly complex Legacy Machine (LM)  Split Escapement, which first made its debut in 2015 in the LM case. The Legacy Machine Split Escapement Evo watch had a quiet precursor in the form of a 10-piece limited edition Golden Jubilee version unveiled last year to celebrate 50 yeas of the United Arab Emirates. It was more of an under-the-radar collection that now comes to life as a series in and of itself.

The Split Escapement watch is truly special for a multitude of reasons. The first ground-breaking Split Escapement was conceived of by master watchmaker Stephen McDonnell from Northern Ireland. It came in the form of a LM Perpetual Calendar in 2015 that he was working on for MB&F and that had to feature the brand’s signature flying balance wheel in the center of the dial. Because the perpetual calendar system he developed was so advanced and revolutionary, requiring additional mechanics, he couldn’t figure out where to place the escapement in the watch. The escapement controls the transfer of energy from the power source to the mechanism – meaning it is vital. 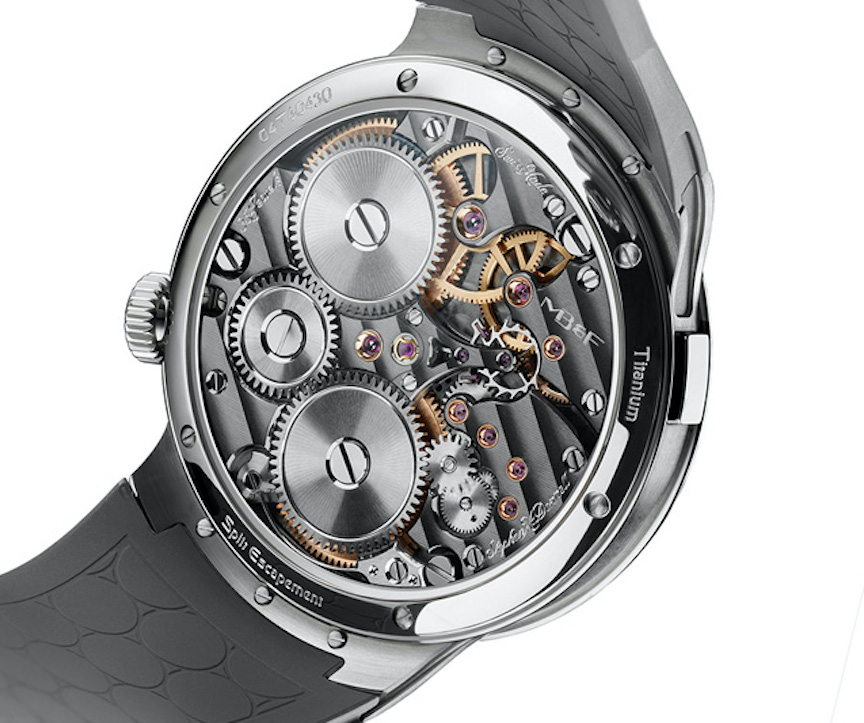 McDonnel decided to split the escapement by creating an exceptionally long balance staff that ran the length of the movement so the balance wheel could take its center-stage position. The rest of the escapement (anchor and escape wheel) are split apart from the balance wheel and placed on the opposite side of the movement. While this may not sound like a big deal to the watch-loving novice, it is a huge deal in the world of watchmaking. No one ever split the escapement before, and no other brand has done this since. 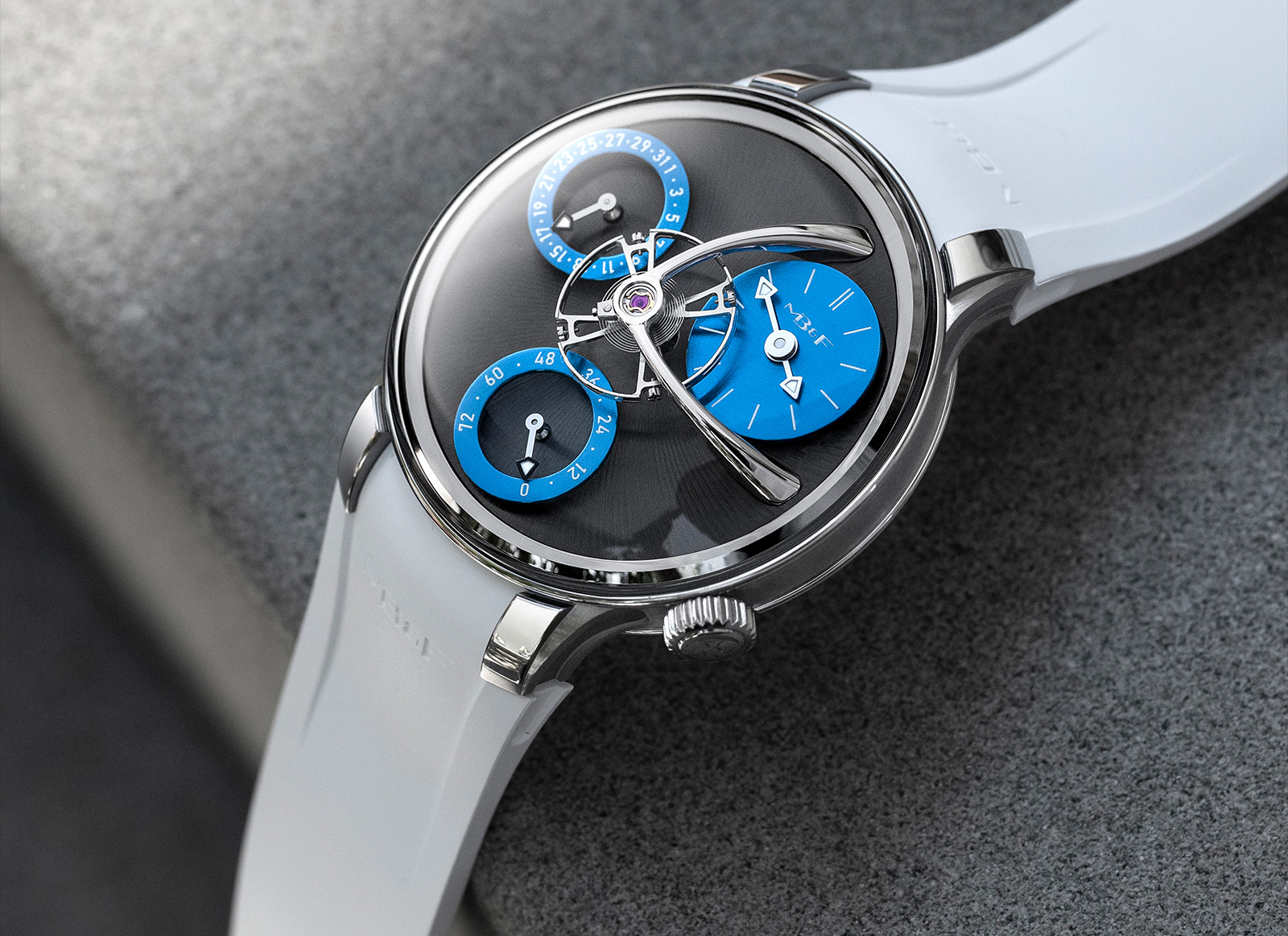 For the new Legacy Machine Split Escapement Evo watch, the brand takes things a step further by rotating the entire mechanism and placing it on a 30-degree angle – changing the look of the watch and making the balance more visible. It also then shifts the crown from the 3:00 position to the 4:30 position on the EVO case. The 298-part movement is a manual-wind caliber driven by two barrels that offer 72 hours of power reserve. It also features a foolproof rapid date-changing system. All of these factors combined demonstrate  the wearability of this watch, not to mention desirability of the high-tech visionary timepiece.

MB&F is presenting two versions of the watch. One Legacy Machine Split Escapement EVO watch, the TI piece, is crafted in grade 5 titanium with an icy blue baseplate and slate gray dial and counters. In this version, certain movement parts are treated with a darker finish for grand contrast. The other version, the Beverly Hills Edition, is also created in titanium but with a black baseplate and blue dial. It is being built in a limited edition of just 25 pieces – all exclusively reserved for the new MB&F LAB, a new retail format in America being managed by Westime. Other LABs will be opening this year in Paris and Singapore. The MB&F Split Escapement EVO retails for $80,000. 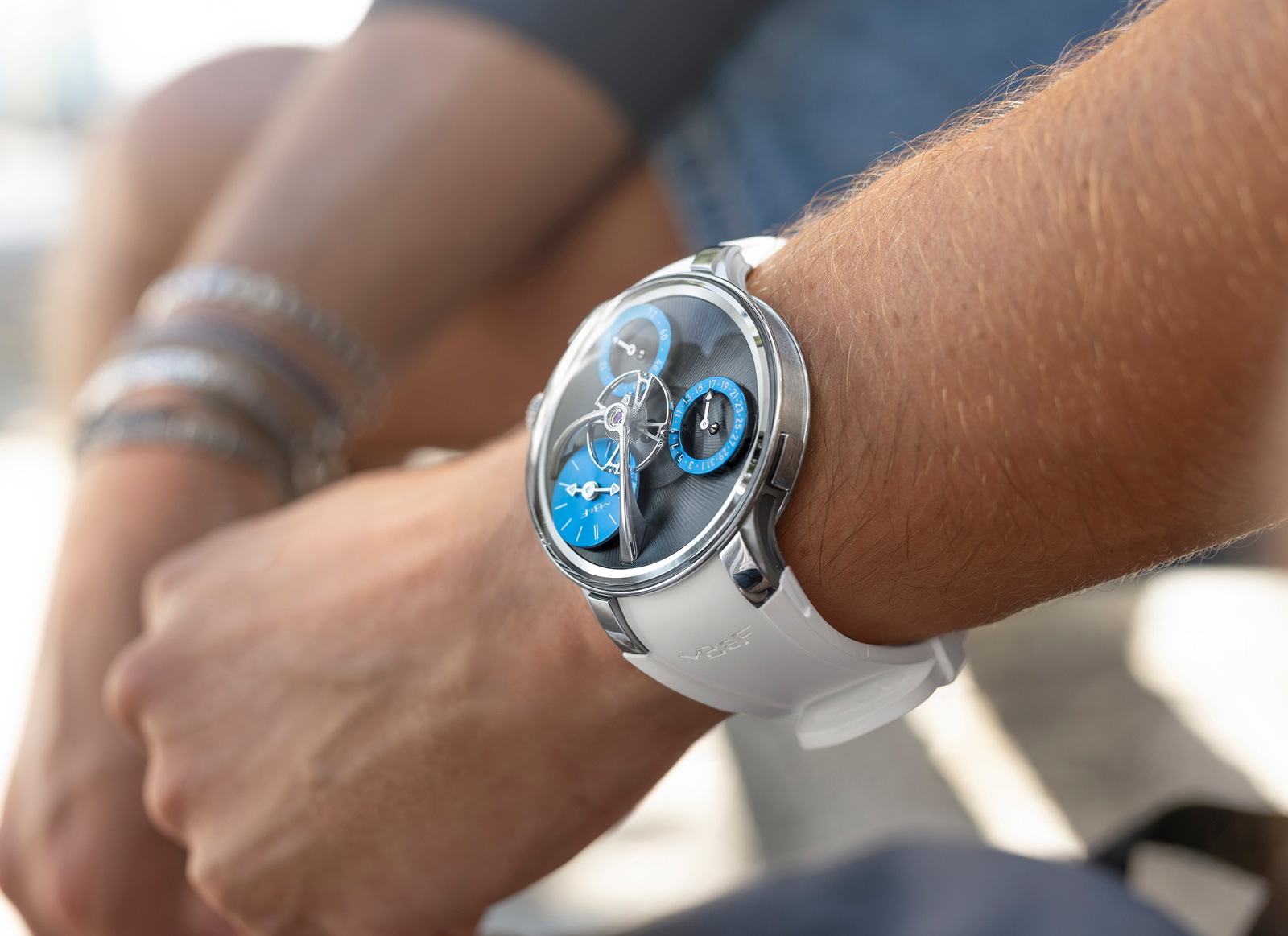