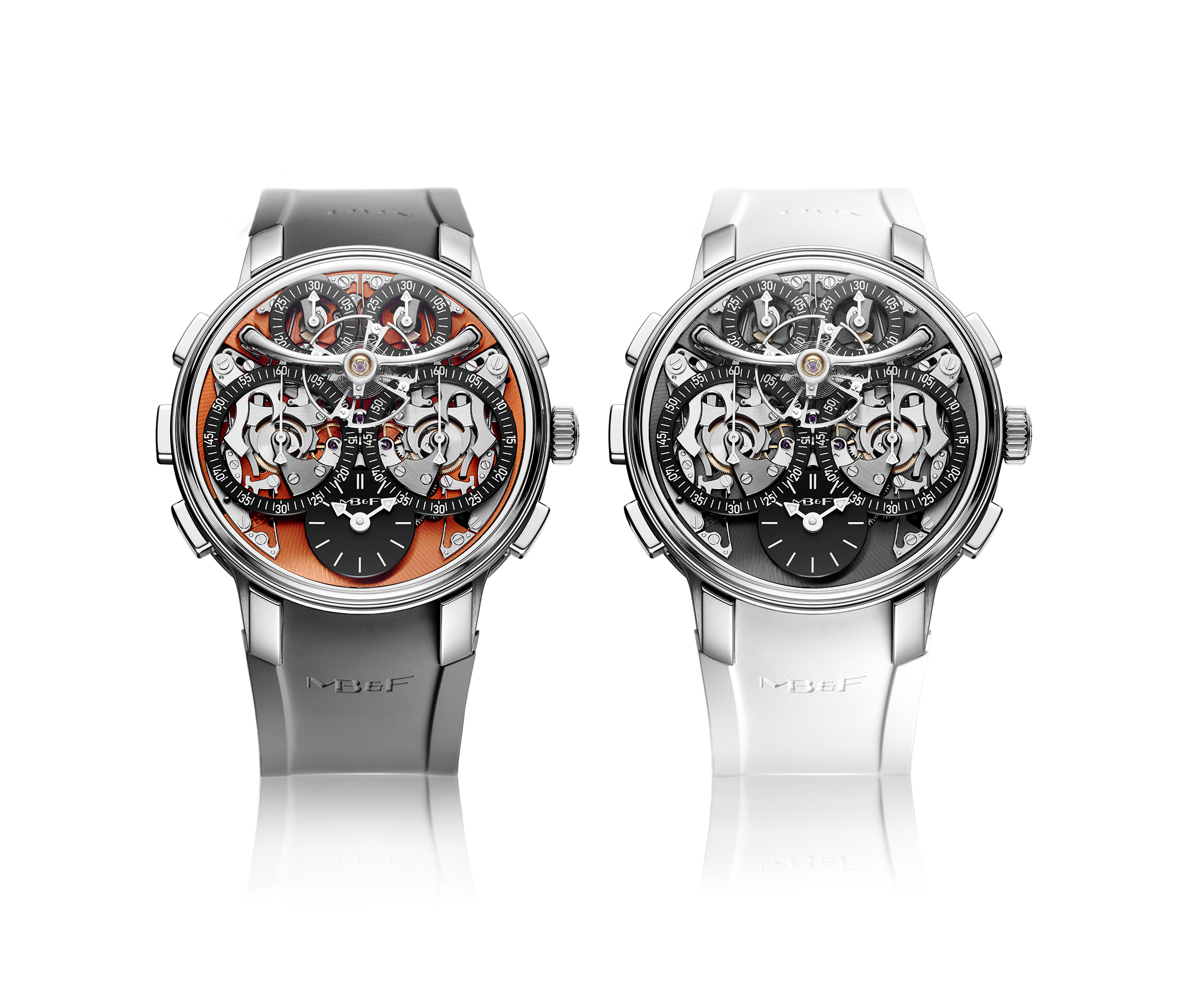 The all-new MB&F Legacy Machine Sequential EVO watch unveiled to the world today is a pretty big deal. Maybe not for some big group-owned brands, but for independent brand MB&F – this new watch houses the brand’s 20th caliber made since the brand’s founding just 17 years ago. Even  better, it is a world’s first when it comes to chronographs – another feat not often reserved for the indie brands.

The Legacy Machine Sequential EVO watch – MB&F’s first-ever chronograph timepiece – was the brainchild of master watchmaker Stephen McDonnell. Hailing from Northern Ireland, McDonnell is no stranger to MB&F. In fact, he was the also the man behind MB&F’s first-ever Perpetual Calendar. Now, For MB&F (Max Busser and friends), McDonnell works magic with the traditional chronograph (stop-watch) by incorporating two column-wheel chronographs into a single movement and combining it with a binary “Twinverter” switch.  This allows for a a chronograph with multiple timing modes, including a split-second timer, as well as  independent and lap timer modes — a first for any chronograph ever built. 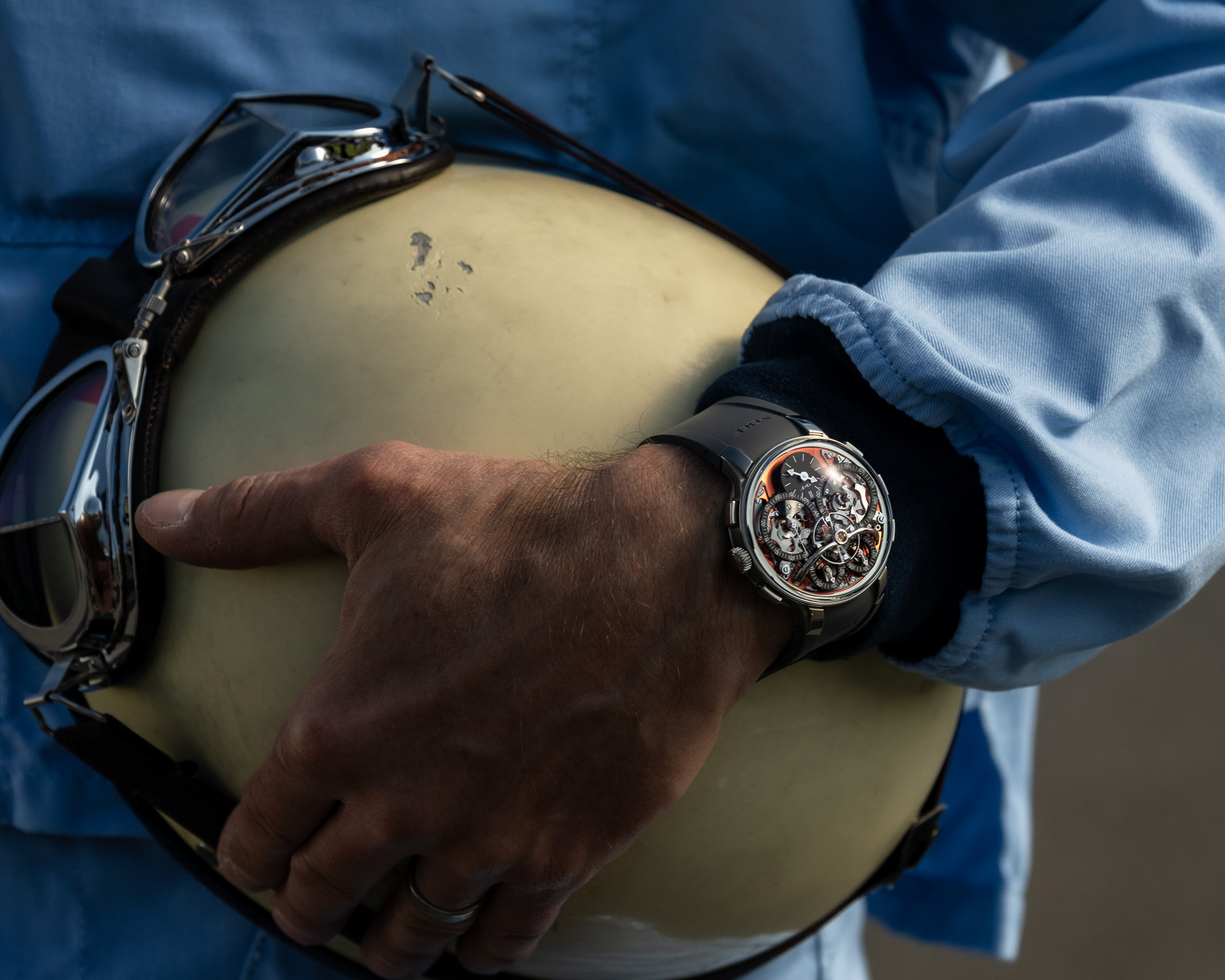 The MB&F Legacy Machine Sequential EVO chronograph is the brand’s first-ever chronograph and is a world first.

By casing the movement in the Evo case made of zirconium, MB&F makes a bold statement about sports watches. The timepiece features a screw-down crown and an integrated rubber strap, as well as a “FlexRing” shock-absorbing system. It is also water resistant to 80 meters. The watch is being offered in two dial colors: Atomic Orange or Coal Black and each retails for $180,000. It is difficult to decide which version is nicer, as the black dial model is sold with a white rubber strap for the ultimate black/and/white combo, while the bold orange dial sort of screams out for attention.

The newest piece of horological art by MB&F, the LM Sequential – much like all MB&F pieces – pushes the limits of design and function. With two chronograph displays on the dial – one with its seconds display at 9:00 and the minutes at 11:00 and one with the seconds display at 3:00 and minutes at 1:00 – the wearer has options never before offered in a chronograph watch. Each of the two displays can be started, stopped and reset independently of the other thanks to pushers on either side of the case. A fifth pusher (at 9:00) is referred to as the “Twinverter” and controls both chronograph systems. It operates like a binary switch that sets the timing of both chronographs immediately into action, and, when pushed, stops both at once. 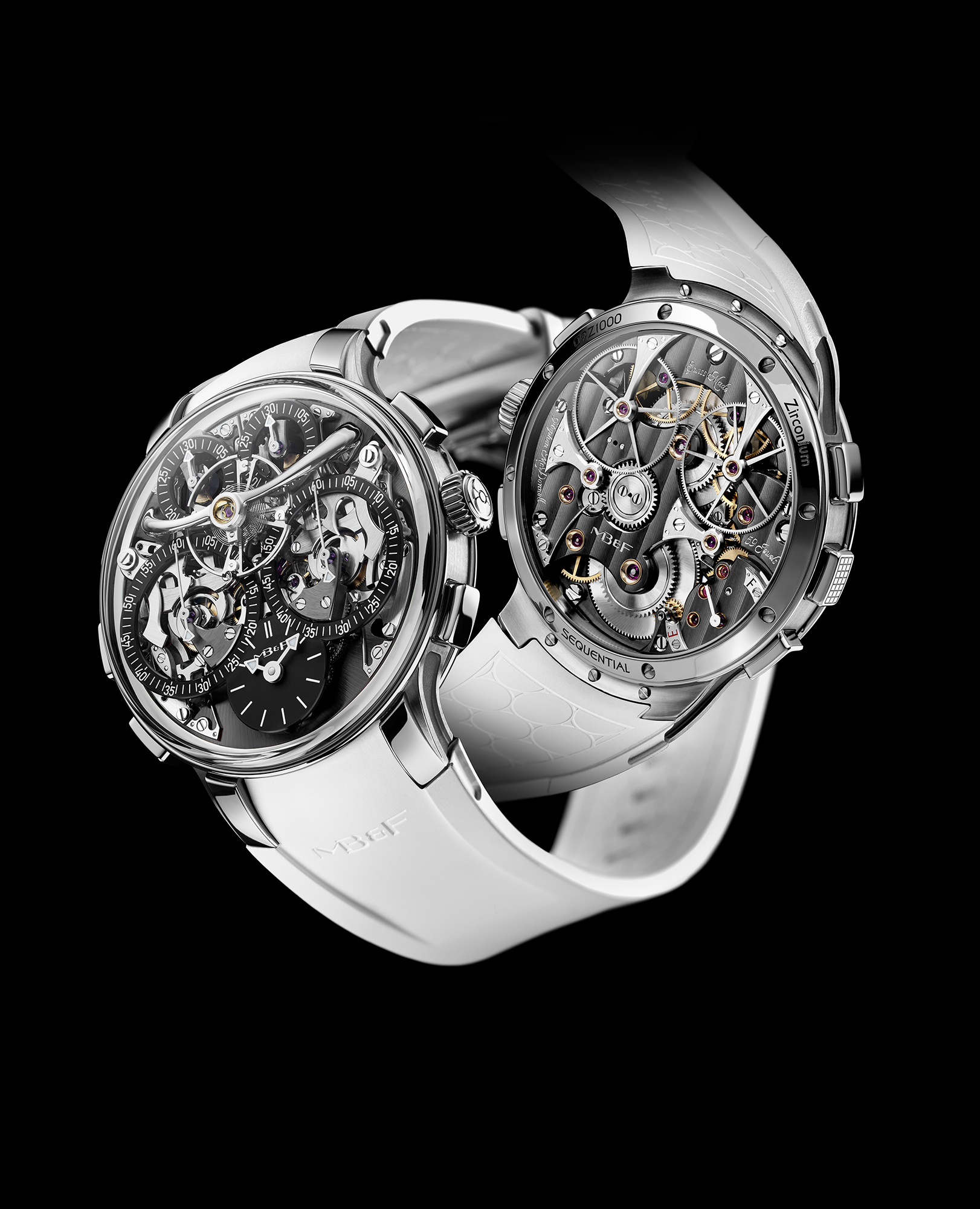 The feature is incredibly complex and emulates the timing of a split-seconds chronograph (also referred to as a Rattrapante) that can track multiple events at once. However, according to MB&F, the system conceived of and developed by McDonnell outperforms conventional split-seconds chronographs in terms of efficiency. Additionally, the Twinverter offers an independent mode for timing overlapping events, a cumulative mode to measure the durations of two discontinuous events and a sequential mode to measure sub-durations of a single multi-phase event. In other words, it may well be the most complicated and comprehensive chronograph timer to date. 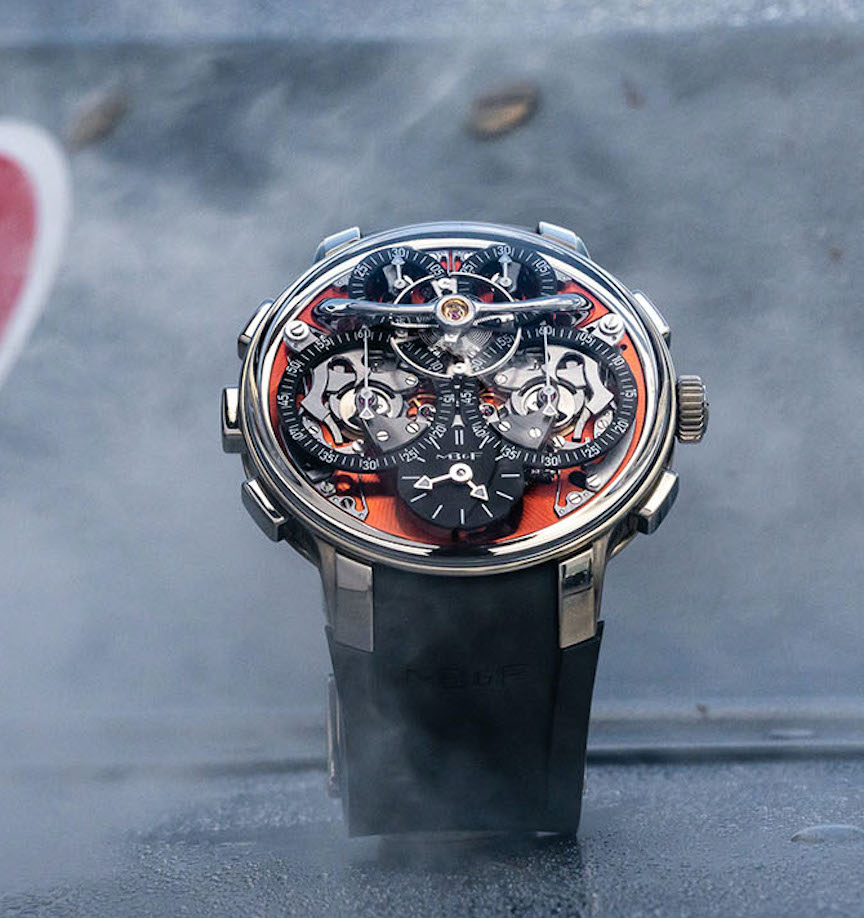 The new Legacy Machine has been a thought and challenge for Stephen McDonnell for more than five years. Even while working on the Legacy Machine Perpetual  Evo that was introduced to the world in 2020, he had inklings in his mind for the next watch. In fact, when the always creative Max Busser asked McDonnell what was next, McDonnell replied simply, “I have an idea.”

Since then, his “idea” has been taking shape – and seemed perfectly fit for the MB&F Legacy Machine with its flying balance wheel and huge vertical space above the dial to work within. The concept, though, required a total reconfiguration of the vertical clutch chronograph so that it could nestle within the main gear train and eliminate fluttering and friction that occurs in most chronographs. McDonnell’s solution included  internally jeweled chronograph clutch shafts and the Twinverter concept to toggle between different chronograph timing modes. 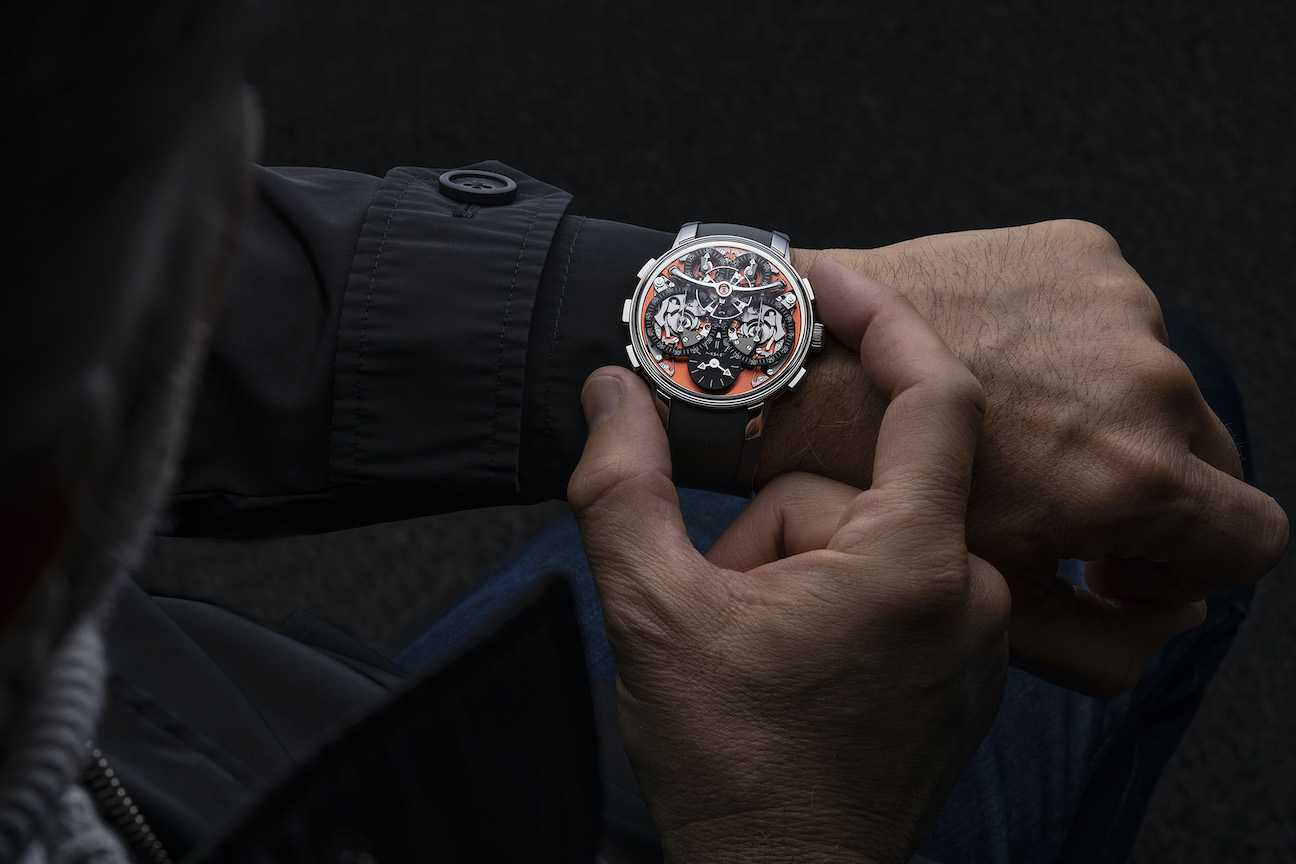 For protection against shocks, the EVO case boasts a dampener between it and the movement. Referred to as the FlexRing, the annular dampener is machined from stainless steel for robustness and strength. The fully integrated dual chronograph system developed by McDonnell for MB&F is a manually wound caliber consisting of a massive 585 pieces  and 51 jewels, with a double main spring and three days of power reserve. The 44mm case consists of another 74 parts. 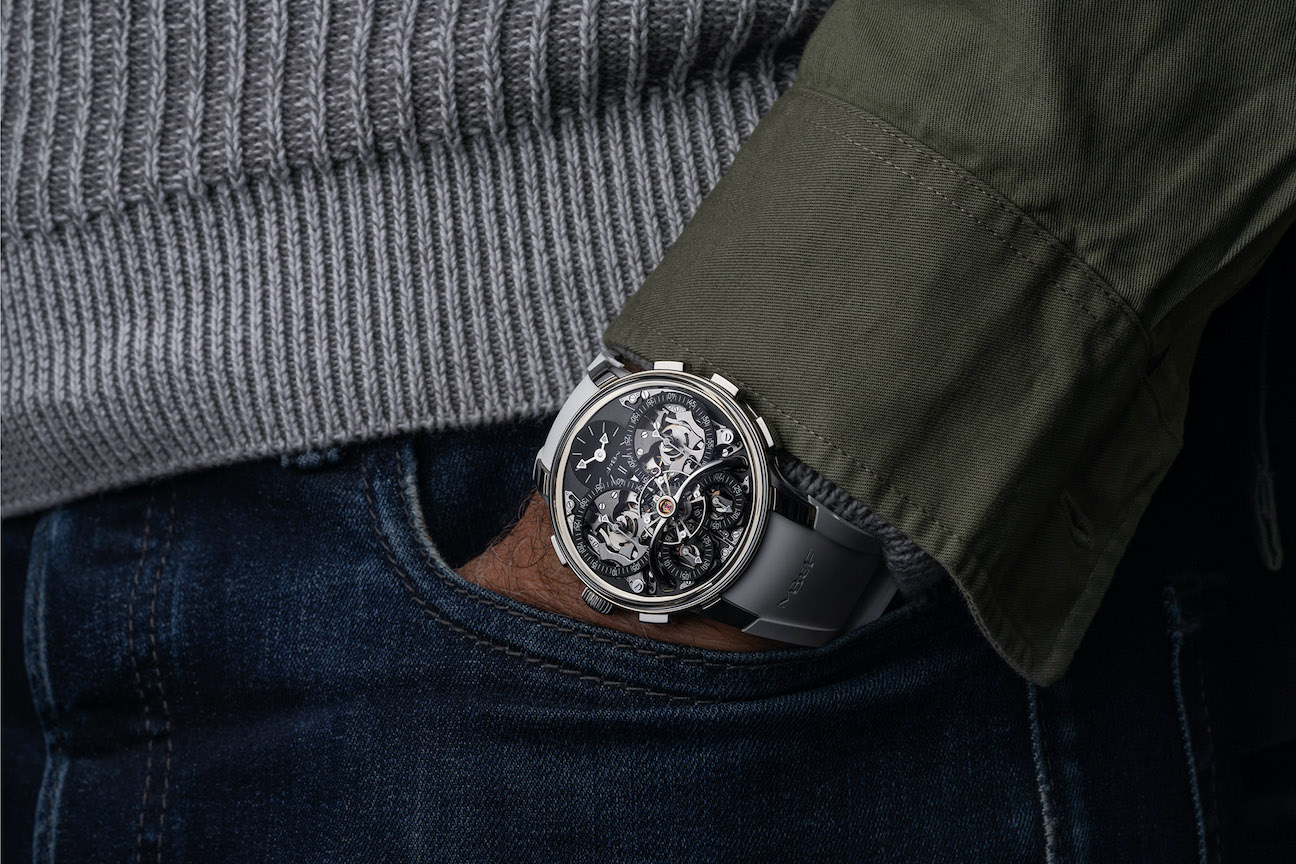