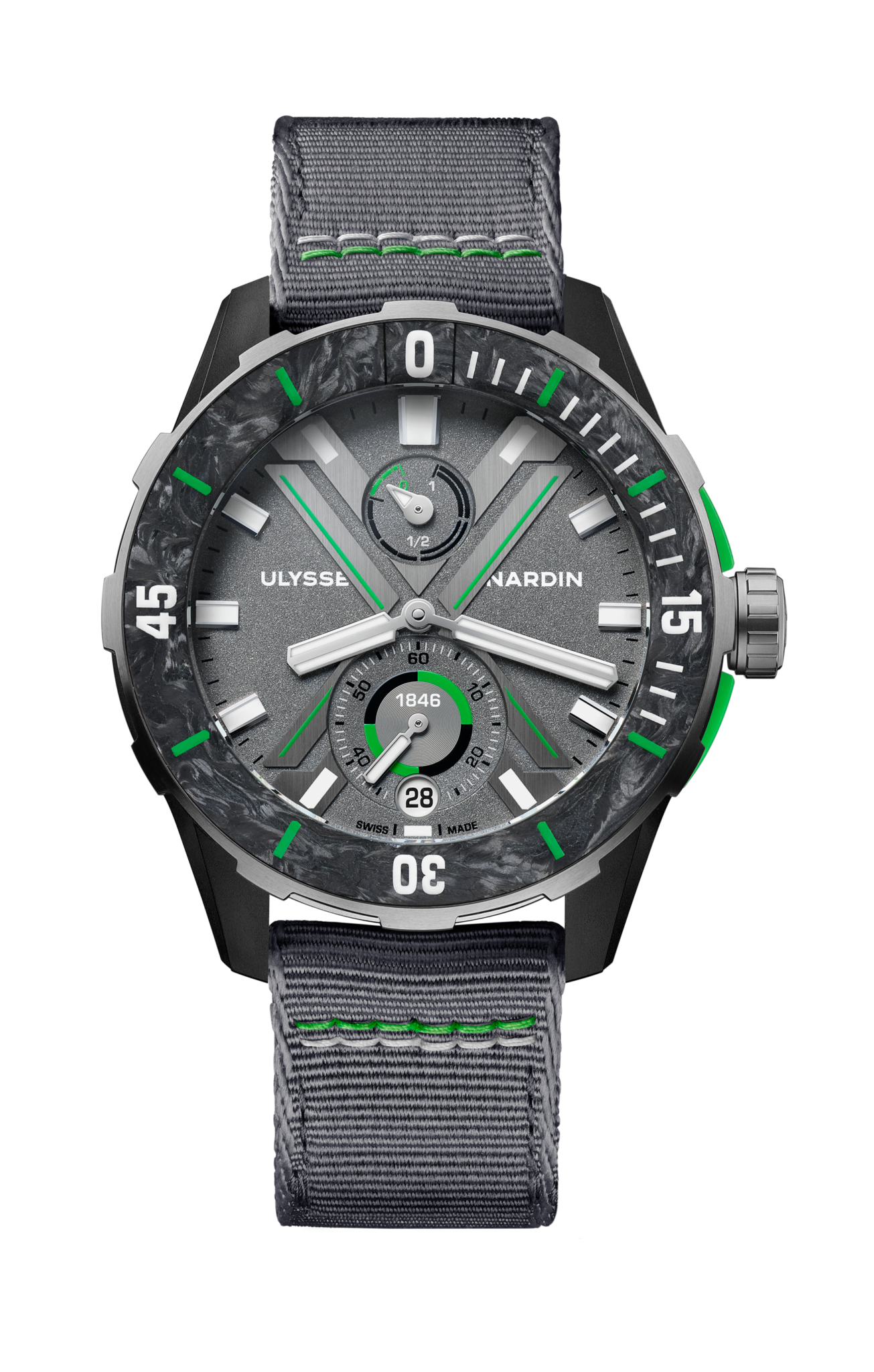 With an estimated 5,000 billion pieces of plastic floating at sea, plastic pollution is a major issue facing our world’s oceans. And plastic fishing nets are one of the main sources of the problem—with about 640,000 metric tons lost or abandoned each year, according to Science.

Ulysse Nardin won’t singlehandedly solve this worldwide problem of plastic pollution. But the company has nonetheless jumped right in, taking a step in the right direction with The Ocean Race Diver, which is crafted in part from plastic fishing nets. The 22-piece collection was created in partnership with The Ocean Race, an open-sea sailing event scheduled to start from Alicante, Spain, in January of next year, where the watch brand will serve as official timekeeper. 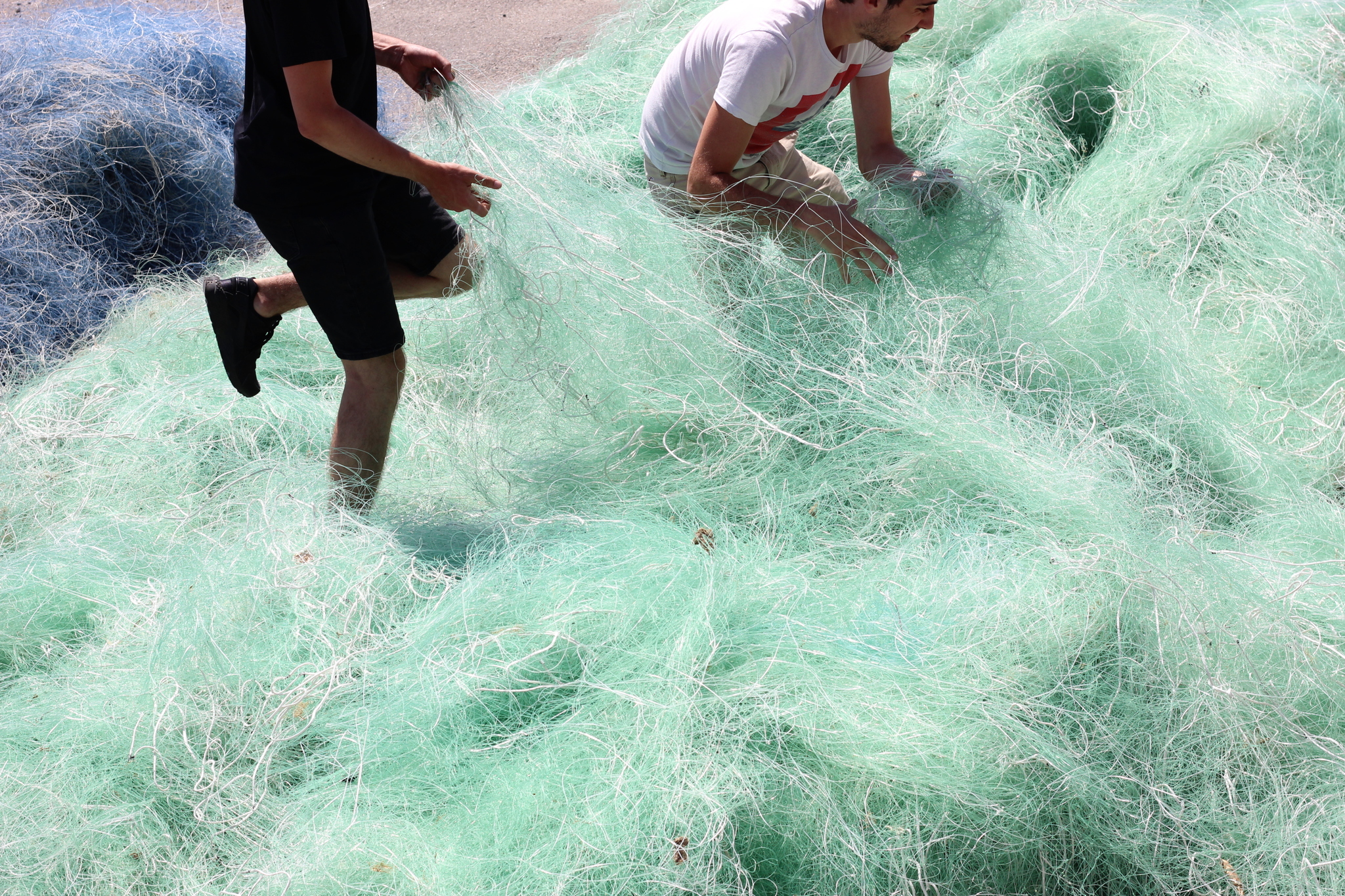 The success of the effort—including the awareness it brings to the problem of pollution—is due in part to the work of the French start-up Fil & Fab, the first fishing net recycling business in France. Founded in 2015, the company recovers plastic nets in French fishing ports and recycles them into polyamide granules used to produce Nylo. Nylo is in turn employed in the production of The Ocean Race Diver’s case. 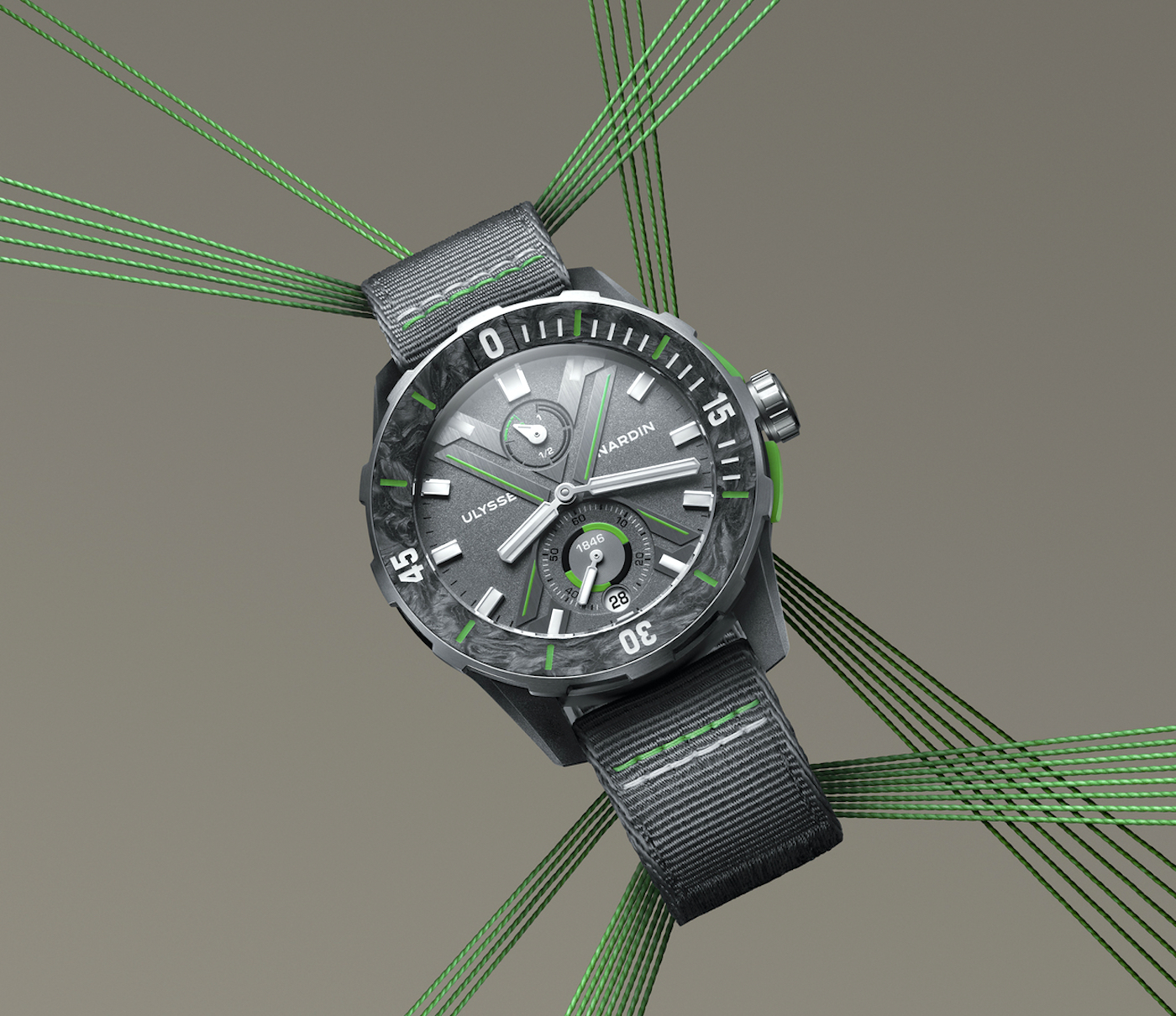 But there were earlier steps on Ulysse Nardin’s upcycle path that pointed the eventual way to The Ocean Race Diver, such as the launch of the R-Strap in 2020—made entirely from recycled fishing nets—as well as an experimental concept watch, the Diver Net, which made its debut that same year. 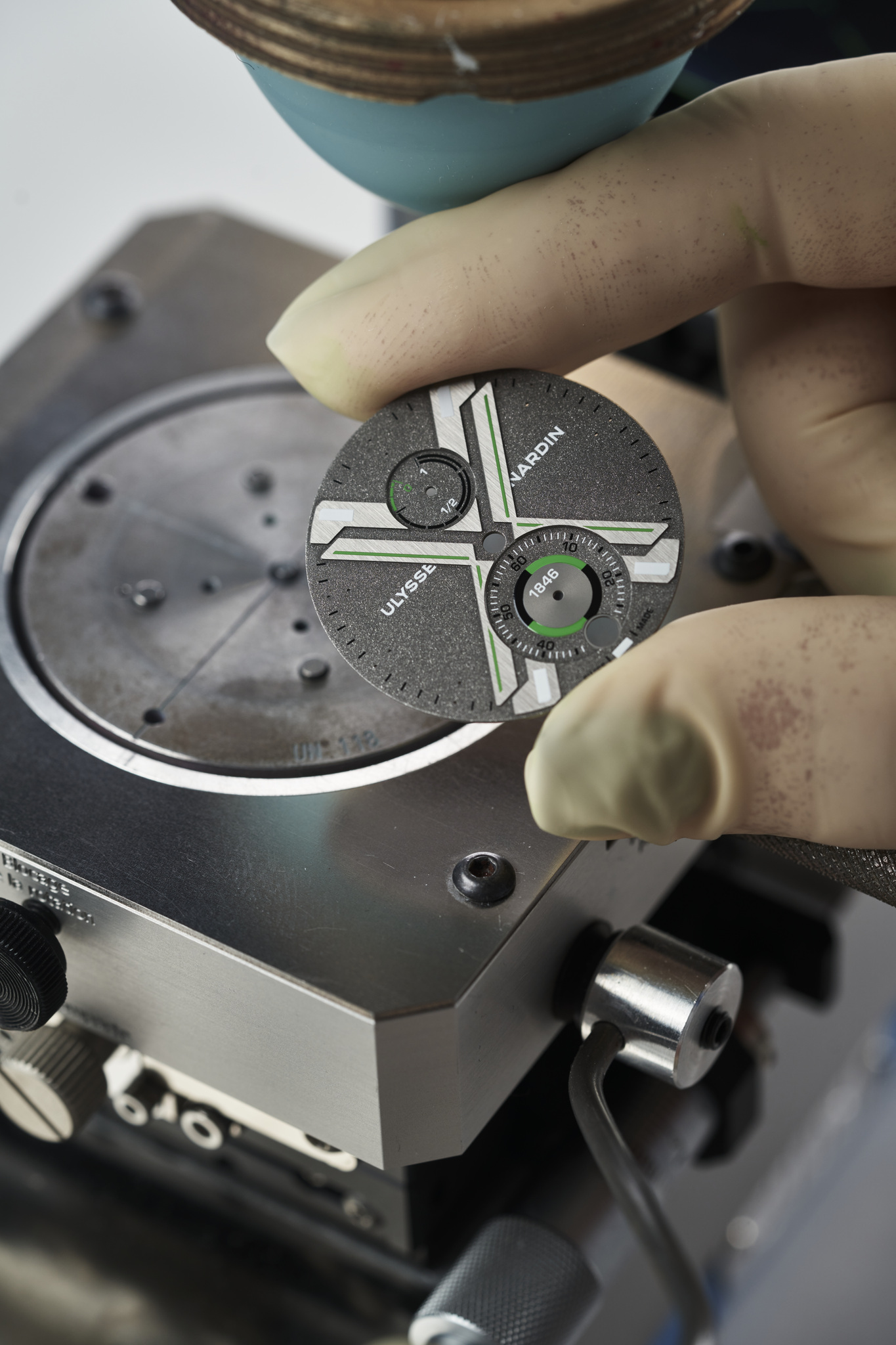 The Ocean Race Diver delivers a variety of fine-timepiece details, making “upcycled” look as good as its intentions. The watch is water resistant to 300 meters and is driven by the UN-118 movement, which features subsidiary seconds, date, and power reserve of 60 hours—with an indicator at 12 o’clock. Its components are 95% sourced within a 30 km radius of the Manufacture in Switzerland, and half come from recycling channels, primarily recycled steel and brass.

The side of the 44mm case and the caseback are 40% carbonium and 60% Nylo, while the steel used is at least 80% recycled and comes from an automotive industry steel recycling channel. Carbonium, from which the bezel is also made, uses the same fibers as those sourced for the fuselage and wings of modern-day aircraft. Interestingly, the manufacture of carbonium has a 40% lower environmental impact than other carbon composites, since it incorporates the offcuts of aircraft parts. 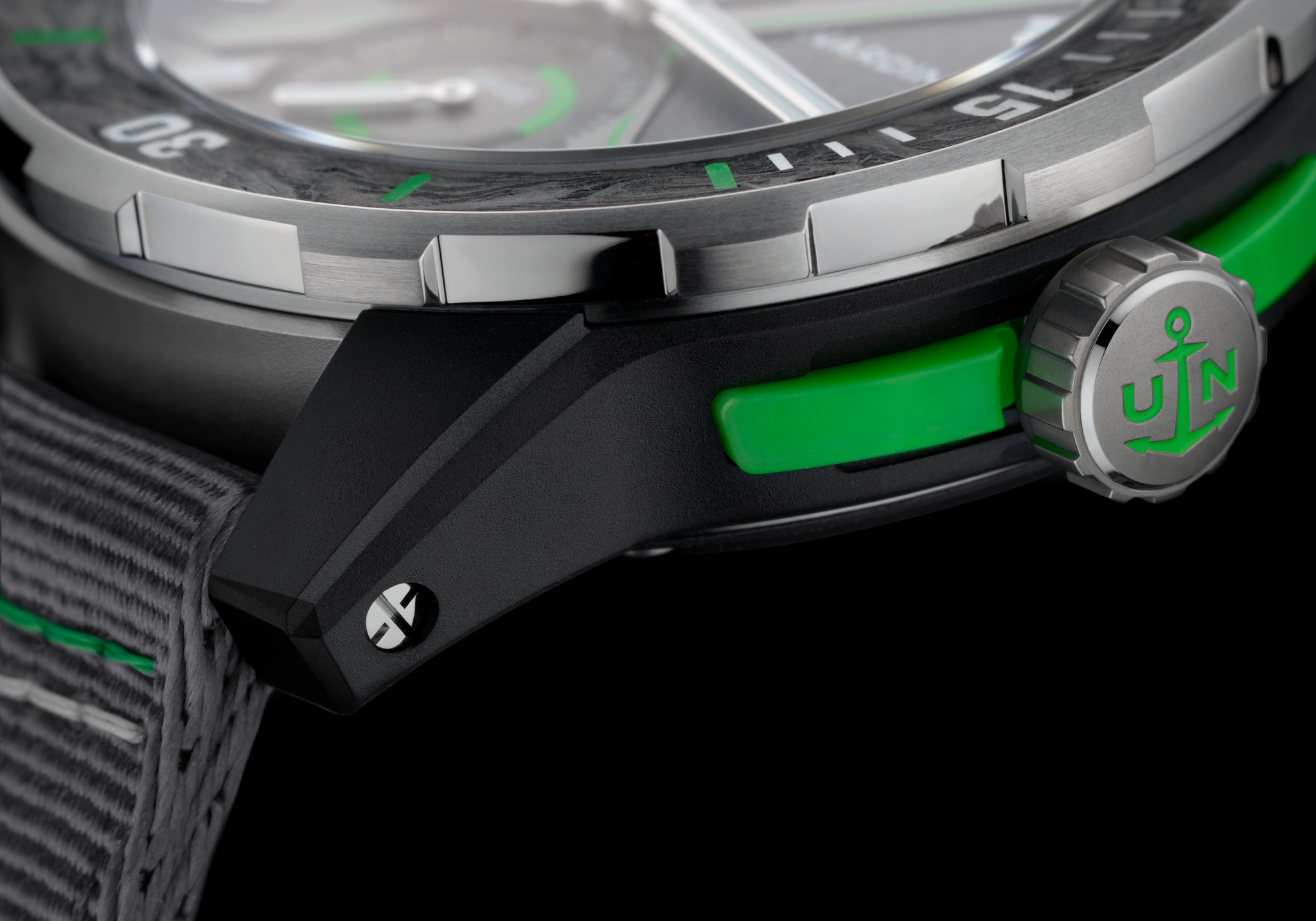 The side of the Ulysse Nardin Ocean Race Diver watch is made of carbonic and Nylo.

Bright green details are an attractive counterpoint to the watch’s otherwise neutral palette, from the markers on the bezel to the signature “X” on the dial to elements on the caseback and rotor. The power reserve subdial at 12 o’clock and the multi-surfaced small seconds subdial at 6 o’clock are also accented, and even the gray fabric strap has lush green topstitching. The strap, no surprise, is made from recycled fishing nets, which were transformed into reels of yarn by JTTI, a French company that specializes in textile processing.

The Ocean Race Diver limited edition is priced at $11,500, and it is available this month. It comes in a water-resistant R-PET pouch nestled in a dry bag by Norwegian clothing manufacturer and retailer Helly Hansen, the official clothing supplier for the round-the-world Ocean Race. 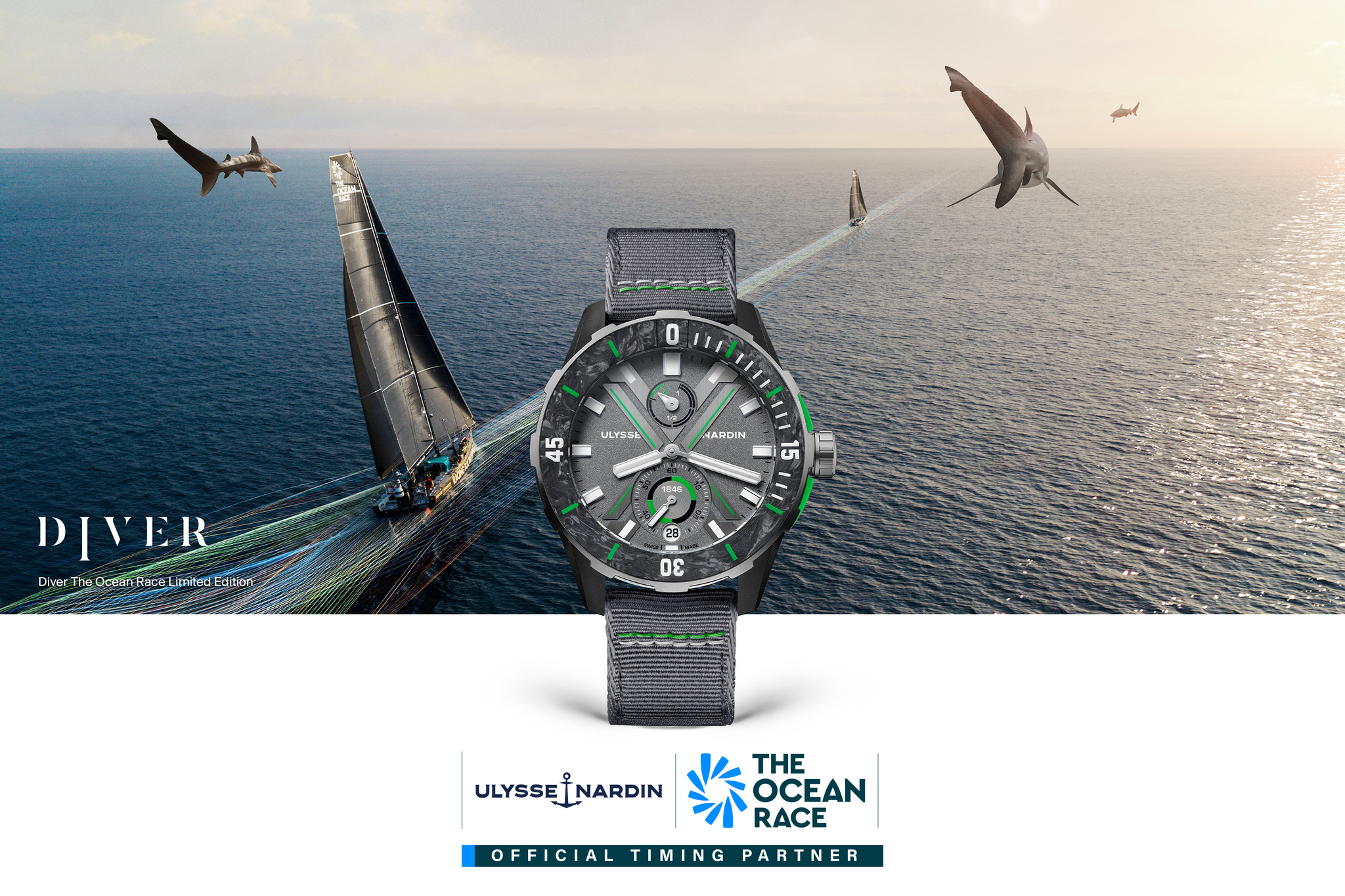