Astronomical clock created in the 18th century by Passemant said to be accurate to the year 10000. Movement made by Dauthiau.

While in Paris last week with Breguet  on an exciting trip to experience the past and present of the brand (we bring you more about that in the next weeks) – we had the wonderful opportunity to visit the Palace of Versailles (complete with a private tour of the rarely open Kings Chambers) and the stunning Petit Trianon – summer home of Marie Antoinette, a patron of Abraham-Louis Breguet timepieces.  The real riches – above and beyond the stunning art, the breathtaking grounds, and the overwhelming statuary, architecture and gardens – are the clocks. 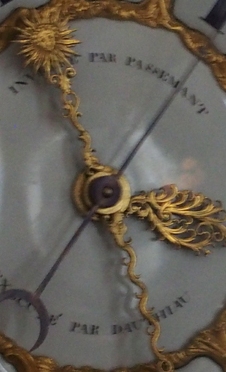 The Passemant astronomical clock al dial indicates the rising and setting of the sun and moon.

Centuries ago, Versailles fast became a place of true science and research. In fact, Louis XIV (who considered himself a keeper of the arts) was urged by Jean-Baptiste Colbert to engage in scientific research and in 1666 Colbert founded the Academy of Science that brought together science and government. Philosophers, artists, engineers, physicists and more gathered to discuss theories and experiments.  Even botanists and zoologists came together to study the many animals housed on the grounds.  The future Louis’ fates were sealed. Louis XV and Louis XVI became true connoisseurs- genuinely interested in the arts and sciences. 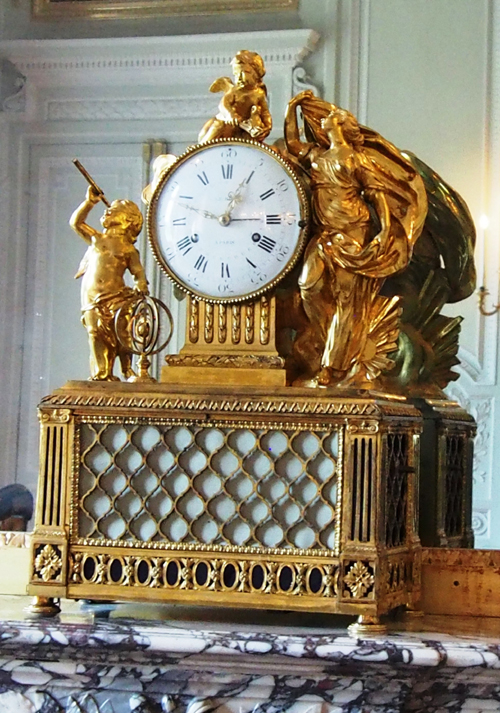 Louis XV was particularly fond of geography and astronomy and set up scientific labs that remained in place until the French Revolution. It was under Louis XV that many of the fine clocks in the palace were secured. Among them – the Passemant astronomical clock. Designed in the 18th century by Claude-Simeon Passemant the clock is amazingly ahead of its counterparts of the day.  It was by this clock that – for the first time ever — the official time in France was set. The outer design of the nearly six-and-a-half-foot tall clock is a fine example of rococo style art. 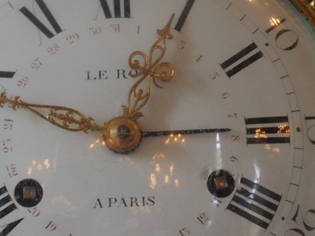 Close up look at the elegant LeRoy clock dial.

More importantly, though, is the function of the Passemant timepiece. It is an astronomical clock – complete with a celestial clear sphere atop it.  The clock displays the date, time, phases of the moon, and planetary motion within the sphere.  The astronomical dial indicates the rising and setting of the sun and moon – with Earth depicted as a bronze globe among gilt rocks and waterfalls that 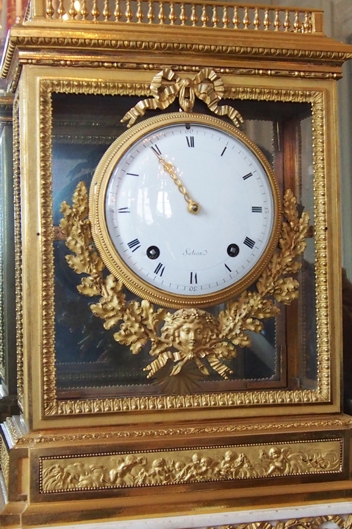 emulate a horizon.  The clock is said to be able to display time accurately until the year 10000. While the mechanism of the clock was developed by Passemant, an engineer, the clock was made by Louis Dauthiau, and the gilt bronze box was made by a sculptor and bronze worker.  The clock was approved by the Academy of Science in 1749 and then presented to Louis XV, who quickly acquired it –later giving it a home at the palace of Versailles. 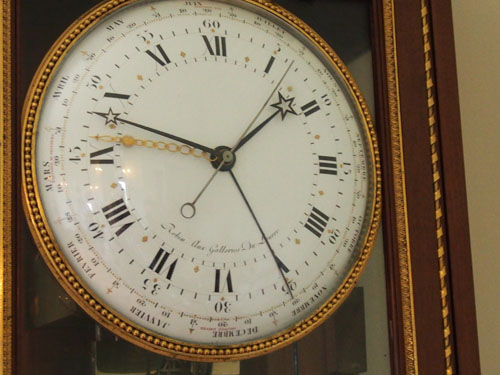 Dial of the complex Robin clock.

made by Le Roy, as well as clocks by Robin and de Sotian. While the history is too long to delve into on each of these clocks, we bring you a delightful inside look at others in the chateau simply to whet your appetite.