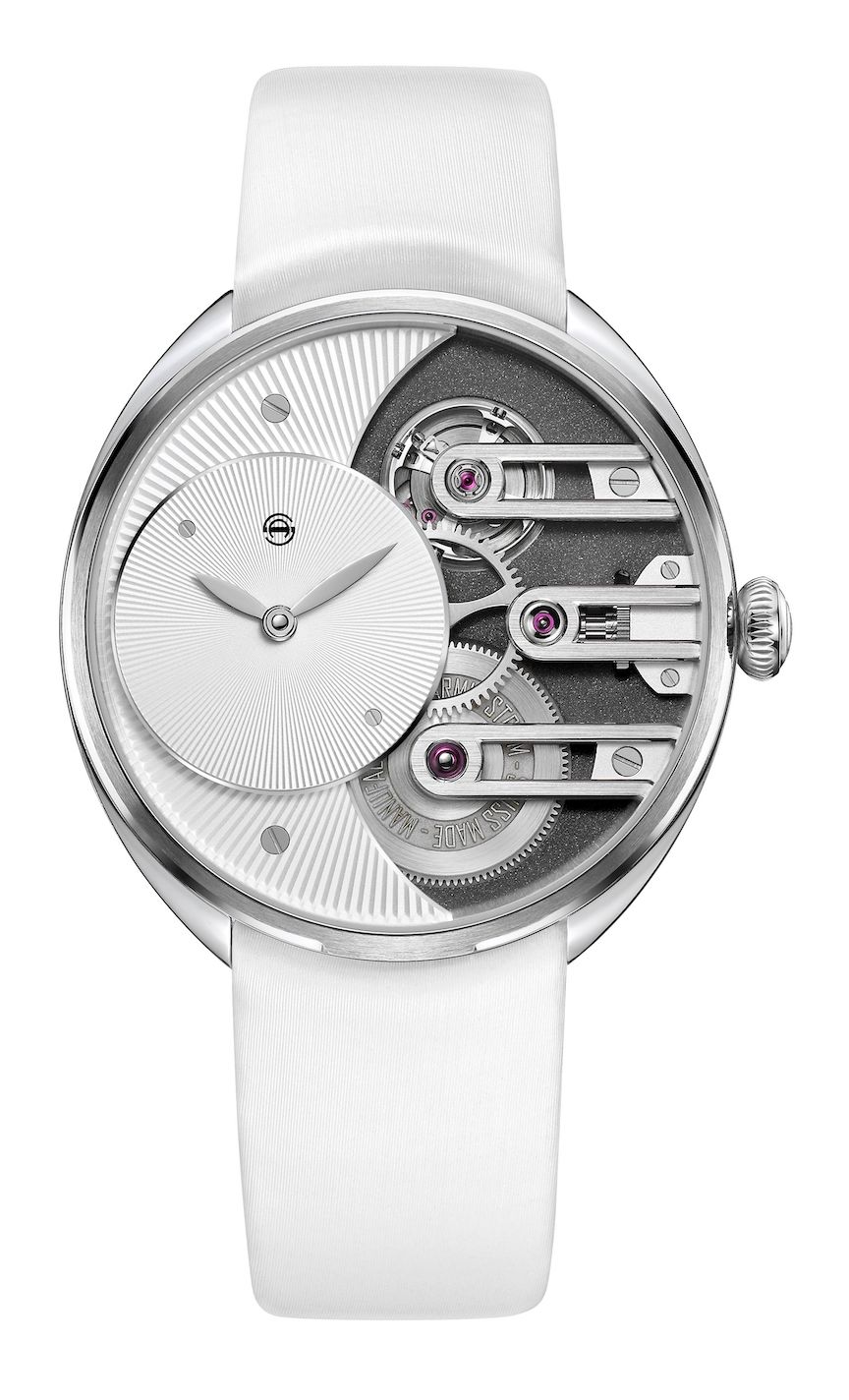 Just last week, independent Swiss watch brand Armin Strom unveiled its first-ever “ladies” watch — developed for women and housing a completely new movement. The Armin Strom Lady Beat watch is all brains and lots of beauty. There is a lot to like about this watch (and maybe one thing I don’t like), so let me lay it out for you.

A fully integrated Manufacture, Armin Strom creates its movements and watches in house and puts a very high focus on complications and on constant force (to ensure higher precision and less friction on parts). With the release of the new Armin Strom Lady Beat watch,  inspired by its Gravity Equal Force watch unveiled last year, it brings its concepts and mastery of watchmaking to the forefront for women. We love the new Lady Beat watch (ok, maybe not the name so much) and think that when it is on the configurator and women can get their hands on personalizing the color choices – it will be an even bigger hit. Here we take a look at three reasons why the Lady Beat watch will turn heads.

The newest Lady Beat watch continues the brand’s philosophy of innovation and precision. Inspired by the Gravity Equal Force watch Armin Strom released in late 2019 that introduced the brand’s System 78 collection of mechanical watches at competitive prices, the new Lady Beat has been totally redesigned to accommodate women, with a smaller case, new dials and, most importantly, a new movement. 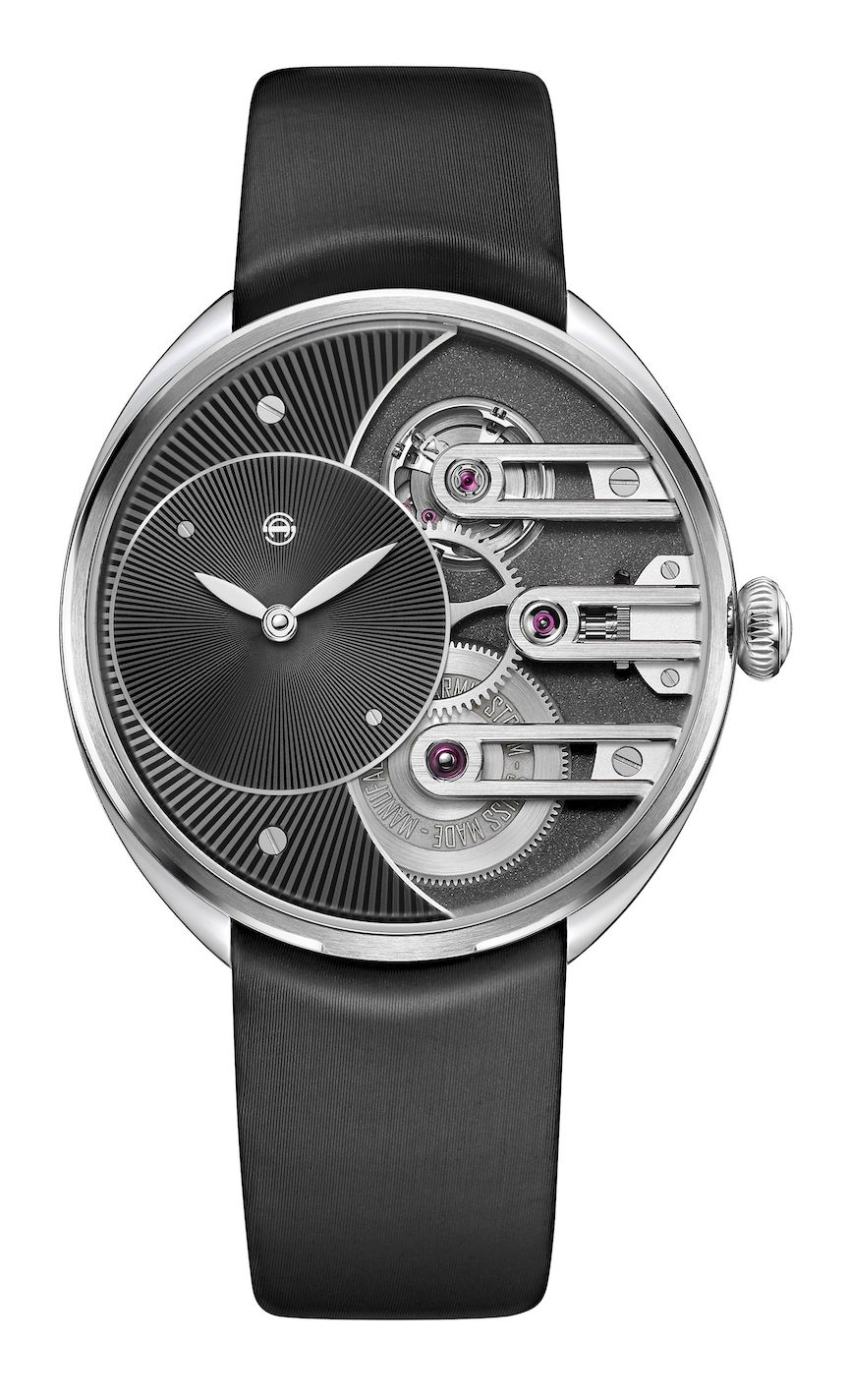 The watch, unveiled initially in a black version and a white version, features an off-center dial with the hour and minute hands in a smaller dial situated on the left side of the piece. On the right side, in an arc format, the mechanics of the movement, complete with three bridges and the constantly beating balance, brings the mechanical watchmaking prowess of the brand into the limelight.

Because Armin Strom is owned by two men,  Claude Greisler and Serge Michel, the brand sought outside consulting into the mix, turning to women designers to bring a softer flair to the watch. This becomes evident with the smaller case diameter of 38mm and with the stunning dial and  plate it sits on. They are beautifully finished with a pleated effect that perfectly counterbalances the open-worked mechanics. To their credit, the brand did not just add diamonds thinking this is what every woman wants. Instead, they relied on soft shapes, circles, semi-circles and crescent moon shapes. 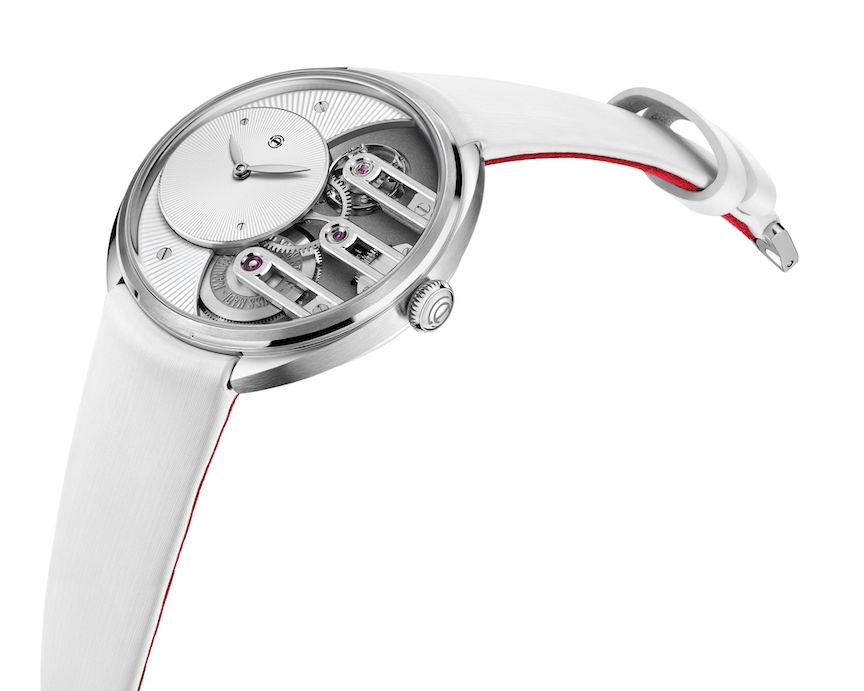 The architecture of the dial and movement allows for depth and dimension.

The lugs that are usually highly prominent on Armin Strom’s men’s watches were ditched in favor of an integrated strap. By eliminating numerals, the hour and minute dial has a truly clean appeal, but the screws that hold it to the plate below are visible as a reminder that this is a technical timepiece, too.

Conceived of as a women’s watch, the Lady Beat could not just be a small version of the Gravity Equal Force. Instead, it needed to have its own movement. While it looks like its big brother, it has been reconfigured so that instead of a micro-rotor on the dial side, it boasts a centrally placed full-sized rotor visible from the transparent case back. This rotor ensures longer winding power and, ultimately a power reserve of 70 hours.

However, from the dial side, the constantly moving balance wheel takes prime positioning. “I like to produce animated watches,” says Greisler. “The wearer should be able to see life in the watch immediately; that it is running, breathing.”

In total, the heart of the watch, the Armin Strom manufacture Caliber ALA20,consists of 185 individual components, each finely finished and hand assembled. The watch is crafted in stainless steel and is water resistant to 3 ATM. The strap is created in two materials: a rubber back with an Alcantara in satin white or black. Each version retails for $17,500. 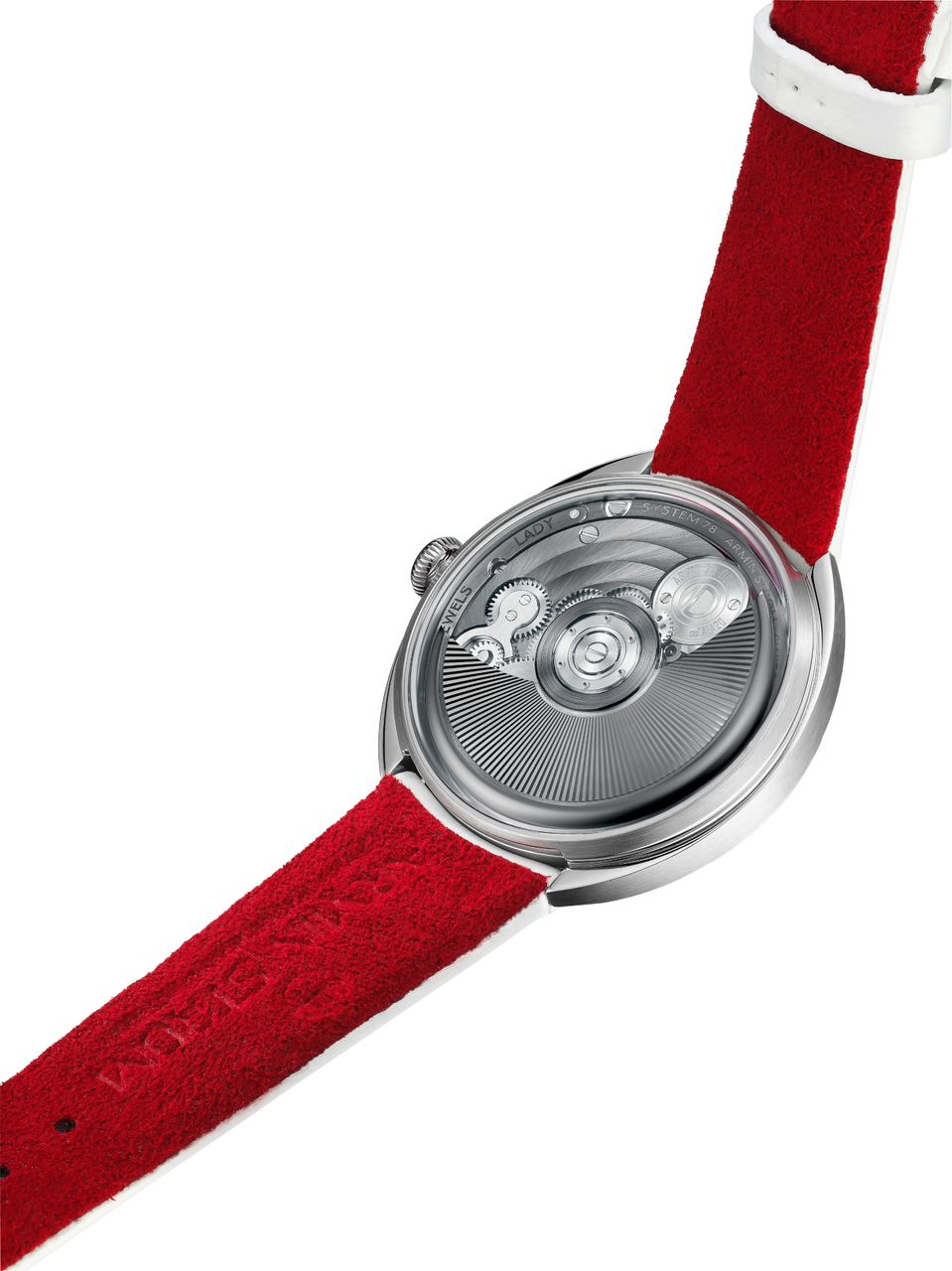 The Armin Strom Lady Beat watch features a transparent sapphire case back to show off the central rotor.

Well, at the risk of upsetting the great Armin Strom team, I really just don’t like the name of this watch. Yes, it says Lady – so there’s no question about who it’s geared for, and yes, the mechanical watch beats, if you will. But I can’t figure out if we are playing on the word heartbeat — to maybe bring love thoughts to mind?  I just think that Lady Beat sounds old and a little  bit flat for such a beautiful watch, inside and out. What would I name it? I have to give that some more thought but maybe something fun and mysterious, like “tryst” or maybe something that strikes a chord with exotic places to travel where sunrises are incredible to mime the guilloche dials.  Like I said, I have to give it a bit more thought. Any ideas?