Why The $858,000 Roger Dubuis Excalibur Superbia Is Superb

Known for its incredible high-tech, high-mech watches, Roger Dubuis goes all out again on its newest one-of-a-kind Excalibur Superbia watch. Yes,  the name is a bit over the top, but then so is the watch. Working with interior designer Kaz Shirane, Roger Dubuis reinterprets its famed and beloved Excalibur with a new movement, and — best of all —  raised diamonds and sapphires in a rare and daunting cut and setting that is breathtaking and hauntingly difficult to execute.

So exactly how does this watch deviate from most other Roger Dubuis watches the market? Starting from the inside out, there is a new high-tech caliber (RD108SQ) with a Double Flying Tourbillon with raised gem-set star, and an incredible palladium and white gold case meticulously set with 600 diamonds and sapphires cut in a daring tetrahedron shape.  The entire case is covered with these triangular, raised stones that are a gem-cutters nightmare to cut and a gem-setter’s nightmare to set. 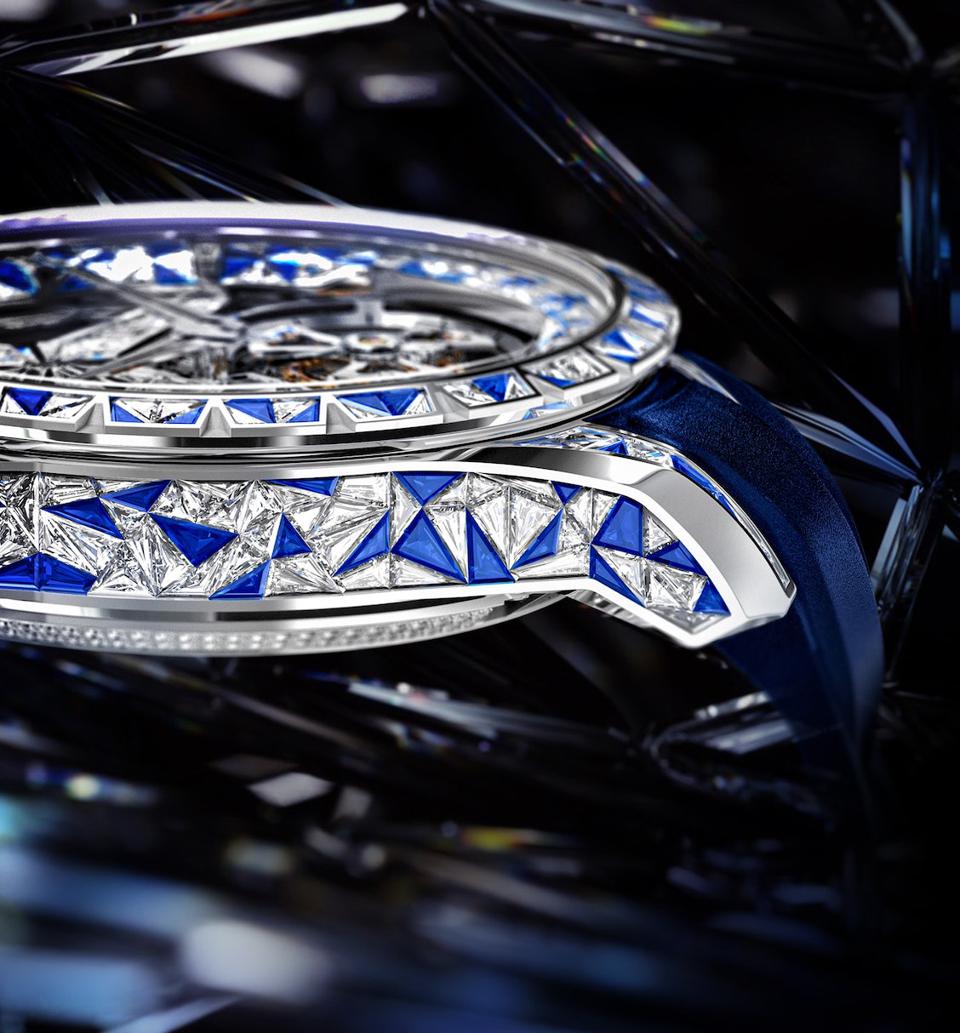 The Roger Dubuis Excalibur Superbia is set with 11 carats of tetrahedron-shaped diamonds and sapphires.

Still, Roger Dubuis accepts nothing less than perfection and insisted the 11 carats of stones be cut in this tetrahedron shape, but in different sizes, despite enormous diamond loss and set in a non-recurring pattern so that every angle is unique. The flange, bezel, case and crown are invisibly set on curved surfaces – something no other watchmaker has done using these tetrahedron shaped stones. This setting on a curved surface with this cut of stone makes this watch a world premiere.

Just the cutting time required for this watch was hundreds of hours of intense labor. Additionally, about 900 hours of  gemsetting was required for the three sides of the case. Every one of the  238 stones on the case has a different size or shape to achieve the wild pattern.  Another 420 hours were spent setting the case and bezel. Gemsetting is a lot more work than just placing the stones on a watch. The master setter must first ready the metal, carving hundreds of grooves in which to invisibly set the stones – this before touching a single diamond or sapphire.

Then, each stone is handled with a tiny tweezer to set into place.  Imagine spending more than 1300 hours working with the magically beautiful diamonds and sapphires that comprise this watch. The setting of this case takes six times more time than the setting of a simple invisible baguette cut piece. Additionally, the setting of the bezel takes three times longer than if using baguette-cut stones.

Daring Design Inside and Out 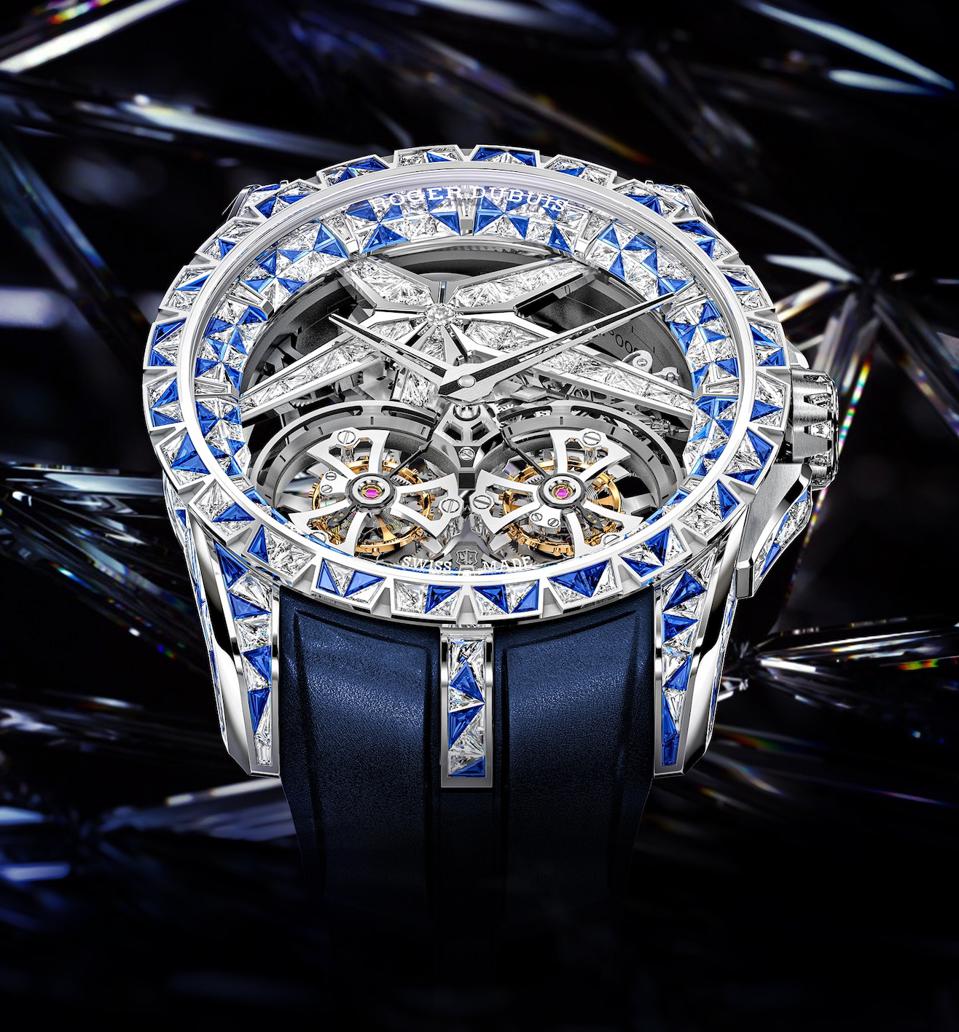 The Excalibur Superbia case back shows off an engraved skull and the Memento Mori words – recalling the fact that life is short and it must be lived to the fullest.  The same concept is engraved somewhere inside the movement, as well. For Roger Dubuis, there is a fine line between madness and reality — and this hyper-horology brand is all about pushing the limits of daring, of design and of mechanics. The watch carries the coveted Hallmark of Geneva certification attesting to its incredible craftsmanship.

According to Kaz Shirane, “The Excalibur Superb is like a time machine that can take us to an extraordinary world in an instant.” Unfortunately, there is just one incredibly audacious piece.

Nicola Andreatta, CEO of Roger Dubuis, says the new one-of-a-kind watch  is a perfect example of the brand’s “obsession every day to create hyper horology. We work outside the norm. Our watches have an adrenaline factor; they are all about emotions. … We are a little bit crazy but we like it. We need a little madness in the world of watchmaking.”