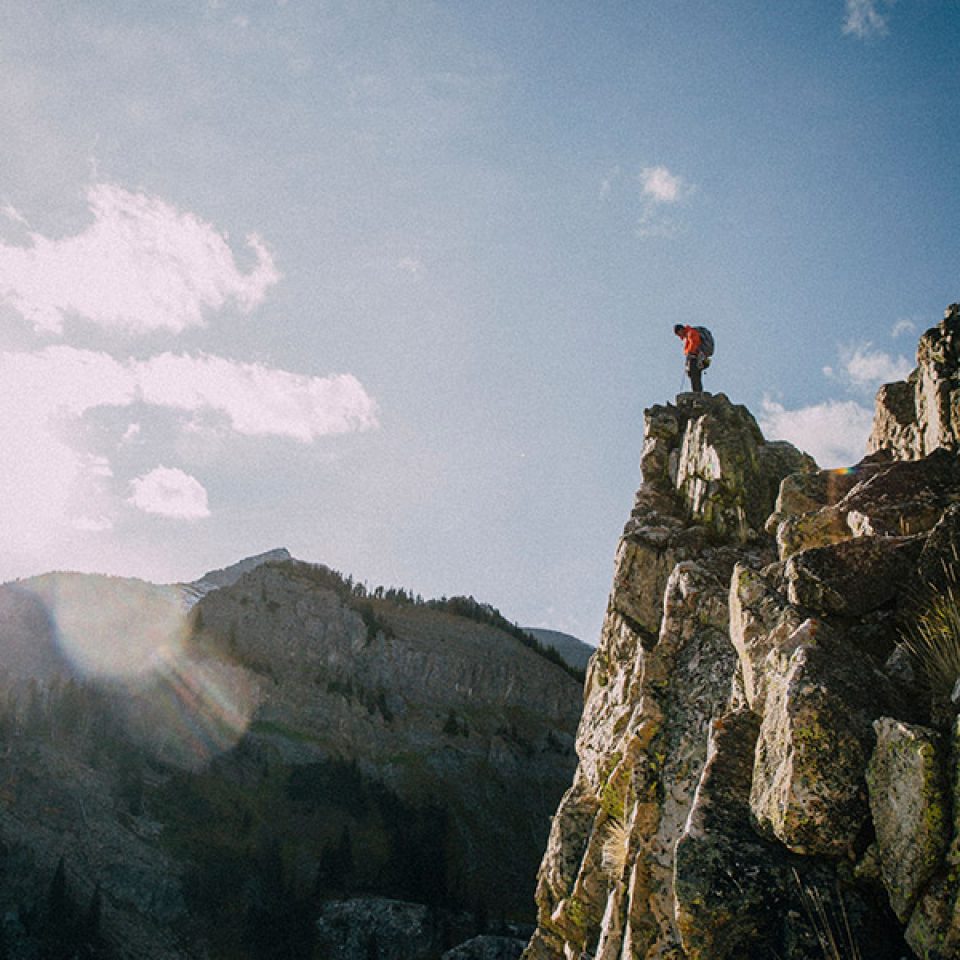 Panerai ambassador Jimmy Chin has summited Everest and is one of the only people to ever ski off the summit.

If you don’t know the name Jimmy Chin, you soon will. This alpinist mountain climber, National Geographic photographer and Award-winning movie maker is quietly making his way to becoming a household name, especially amongst adventurers. He co-produced the movie Meru in 2015, followed several years later by the movie Free Solo — capturing the without-ropes climb of El Capitan. That documentary, co-produced with his wife, won an Academy Award. Currently, Chin is in the process of co-producing another three movies that are guaranteed to take your breath away. Included among them is a documentary about the young school soccer team trapped in a cave in Northern Thailand a couple of years ago. Chin is also planning his next adventures and climbs.

Recently, I had the great fortune to go with Panerai and a very select group of journalists (four of us) to Jackson Hole, Wyoming, to meet Chin and to indulge in some of the sports he loves. Along with us: 14 top watch collectors who had purchased the Jimmy Chin Xperience watch. With that purchase, they also opted in to climb the Grand Tetons with Chin, and to try their hand at one of his favorite sports: wake surfing on Jackson Lake. The event was truly exhilarating. Spending a day on the cold-water lake and another with Chin climbing is an adventurer’s dream. (Full disclosure: I opted for a horseback riding excursion versus climbing since i have very bad knees and a carpal-tunnel-syndrome wrist.) 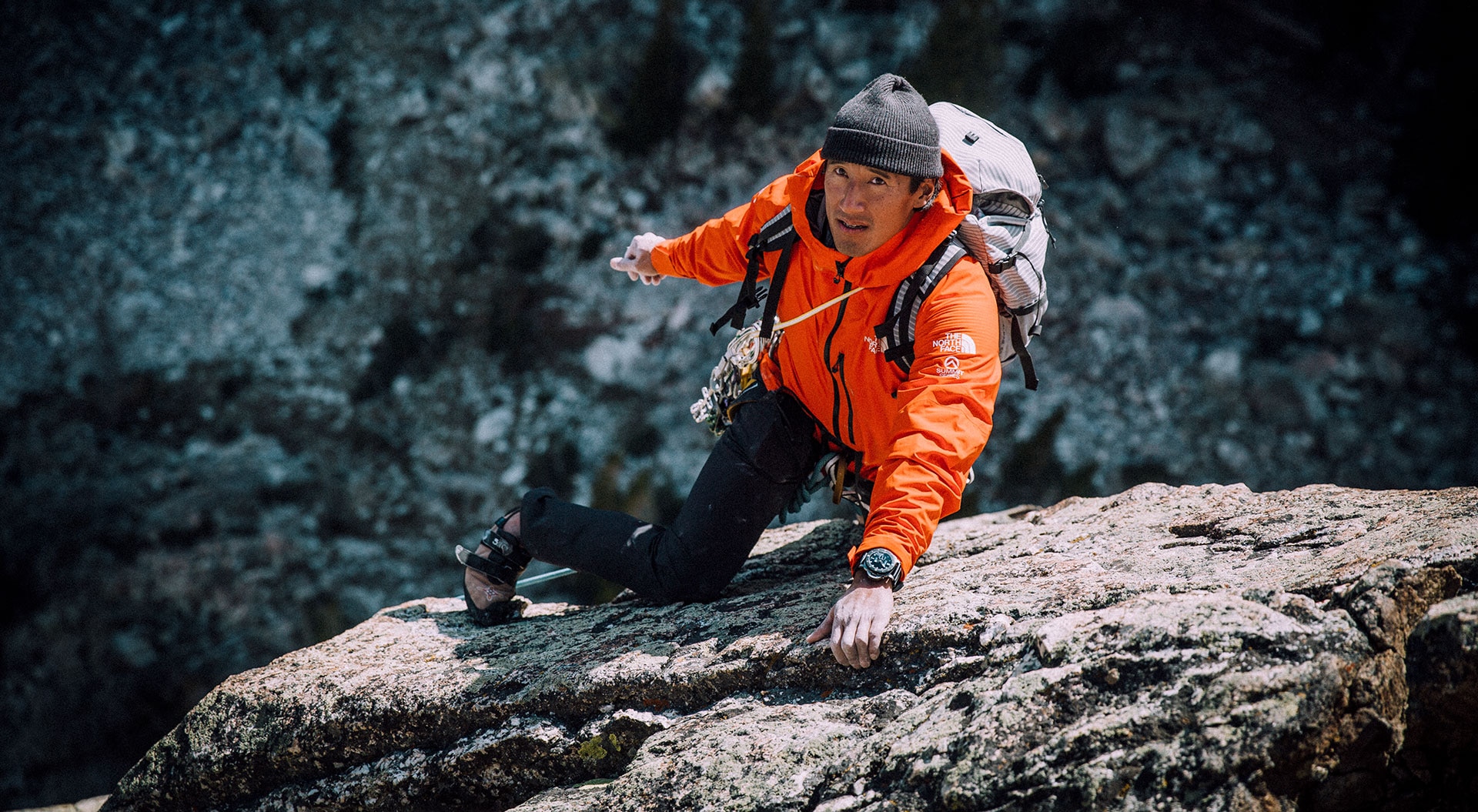 Jimmy Chin is a mountaineer, surfer, photographer and film maker.

At an opening dinner on the first night at one of Chin’s favorite Jackson Hole clubs, he said he was excited to see this group push themselves out side of their normal comfort zones and try something exhilarating. That they did. While several climbers had to turn back due to the high altitudes (more than 6,200 feet above sea level) or very challenging stress, others made the climb. Almost all said the same thing: glad to have done it and accomplished it, but probably would never do it again. Only the fittest said they would do it again — a testament to how truly strenuous serious mountain climbers are. Chin is out there on a regular basis pushing his body to the max. He has survived multiple avalanches and has stared at death in a few close calls. Still, he is humble, honest and inspirational. 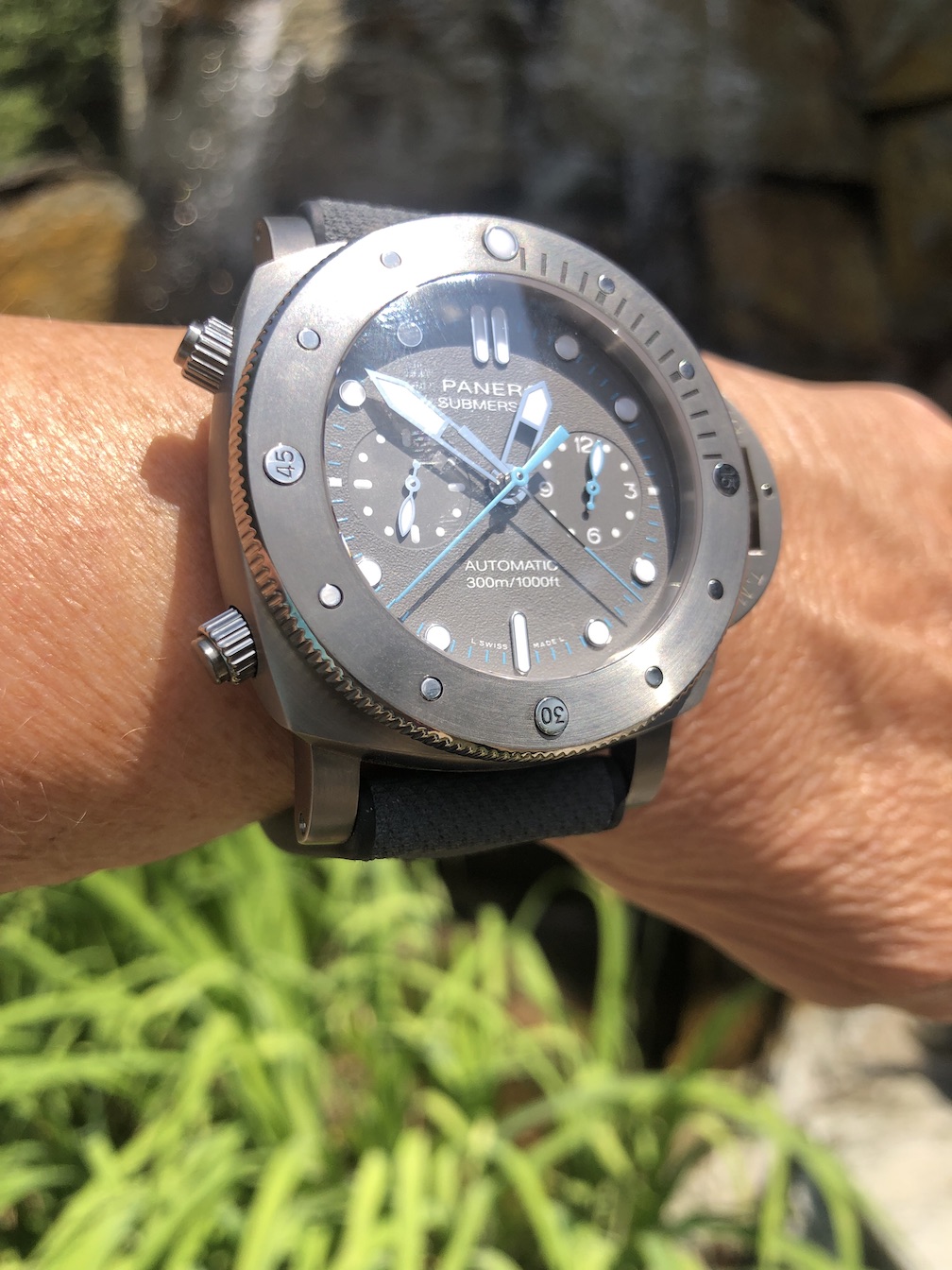 I will bring you more about the time I spent with Jimmy Chin in a secondary article, and in ensuing print articles. For now, I want to focus on the Panerai Jimmy Chin watches. While the 14 Xperience watches have all been sold, there is another set of Jimmy Chin watches up for grabs. But hurry if you want one, because with the way his life experiences are expanding, these watches are sure to become true collector items that will hold their value for years to come. Here, we bring you more about the watches, in this article that first appeared on Forbes. 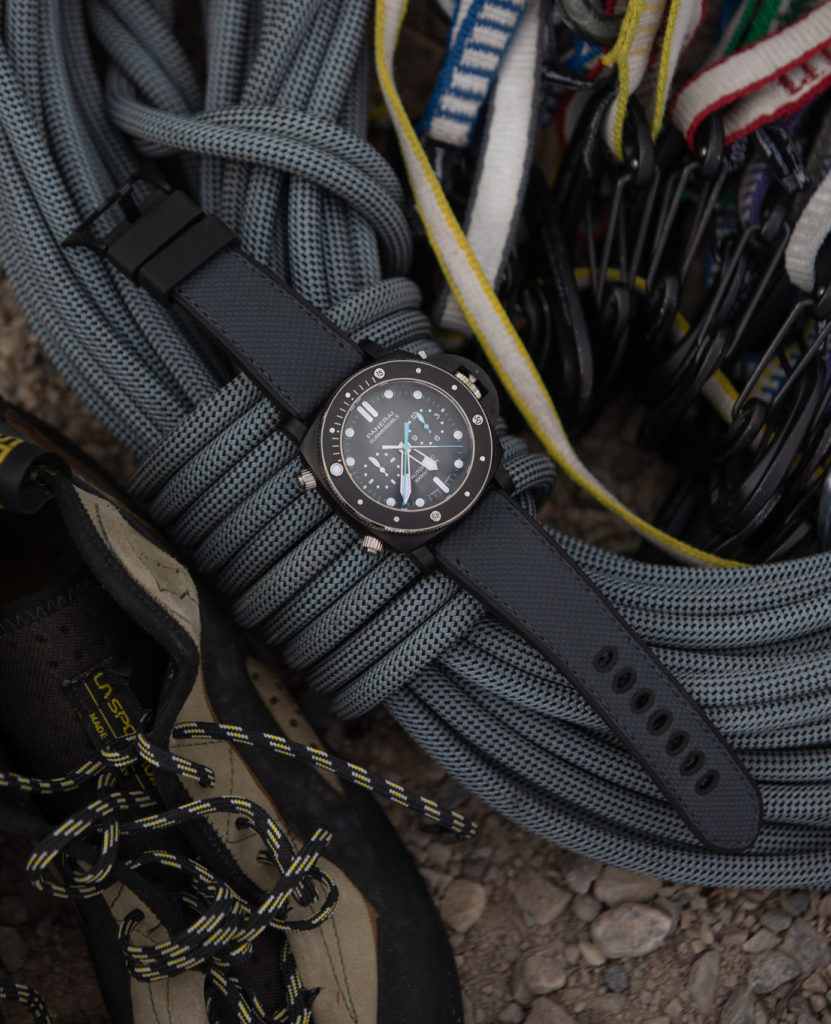 Officine Panerai, the Swiss watch brand with rich Italian roots, is a master at leading the way when it comes to adventure watches. This brand has been crafting dive watches and sport watches for nearly a century and has even supplied certain  armed forces with underwater watches for decades.  A few years ago, the brand launched an exciting new aspect with specific watches: adventure experiences.  As Panerai partnered with adventurers and explorers around the world, it began offering limited-edition watches to collectors that came with a paired “experience.”  The most recent: Jimmy Chin.

The Panerai Submersible Chrono Flyback Jimmy Chin Xperience edition watch was created in a limited edition of just 14 pieces and was sold with an accompanying multi-day event in his hometown of Jackson Hole, Wyoming. There, proud owners of the watch spent a couple of days climbing the Grand Tetons with Chin, learning to wake surf in Jackson lake, and experiencing Chin’s favorite restaurants. Panerai has had several similar experiences with its different ambassadors and their special timepieces over the past year or so, but this was the first event to be held in America.

The Xperience watch is a light weight 47mm titanium piece with black matte DLC coating. The crown, lever and bezel are in titanium for nice contrast. The hands are filled with white Super-LumiNova and the dial is a shaded charcoal gray with blue accents. The case back features an etching of a dramatic  mountainous landscape with intersecting skis and a United States flag. It also features the Jimmy Chin inscription. It retailed for $43,200.

Since only 14 watches were made that included the experience, Panerai also created a special limited-edition Submersible Chrono Flyback Jimmy Chin edition watch that is  available for sale. Both watches share most features, but the X watch is distinguished by its darker dial. The Panerai Submersible Chrono Flyback Jimmy Chin edition is also a 47mm titanium cased piece that is being produced in a limited edition of just 100 pieces and is being sold exclusively in the United States. Both watches are powered by the P.9100 automatic movement with flyback chronograph function that enables the watch to reset and restart timing events with a single press of the pusher.  The 302-part caliber is fitted with high-tech balance wheel and an Incabloc anti-shock device. 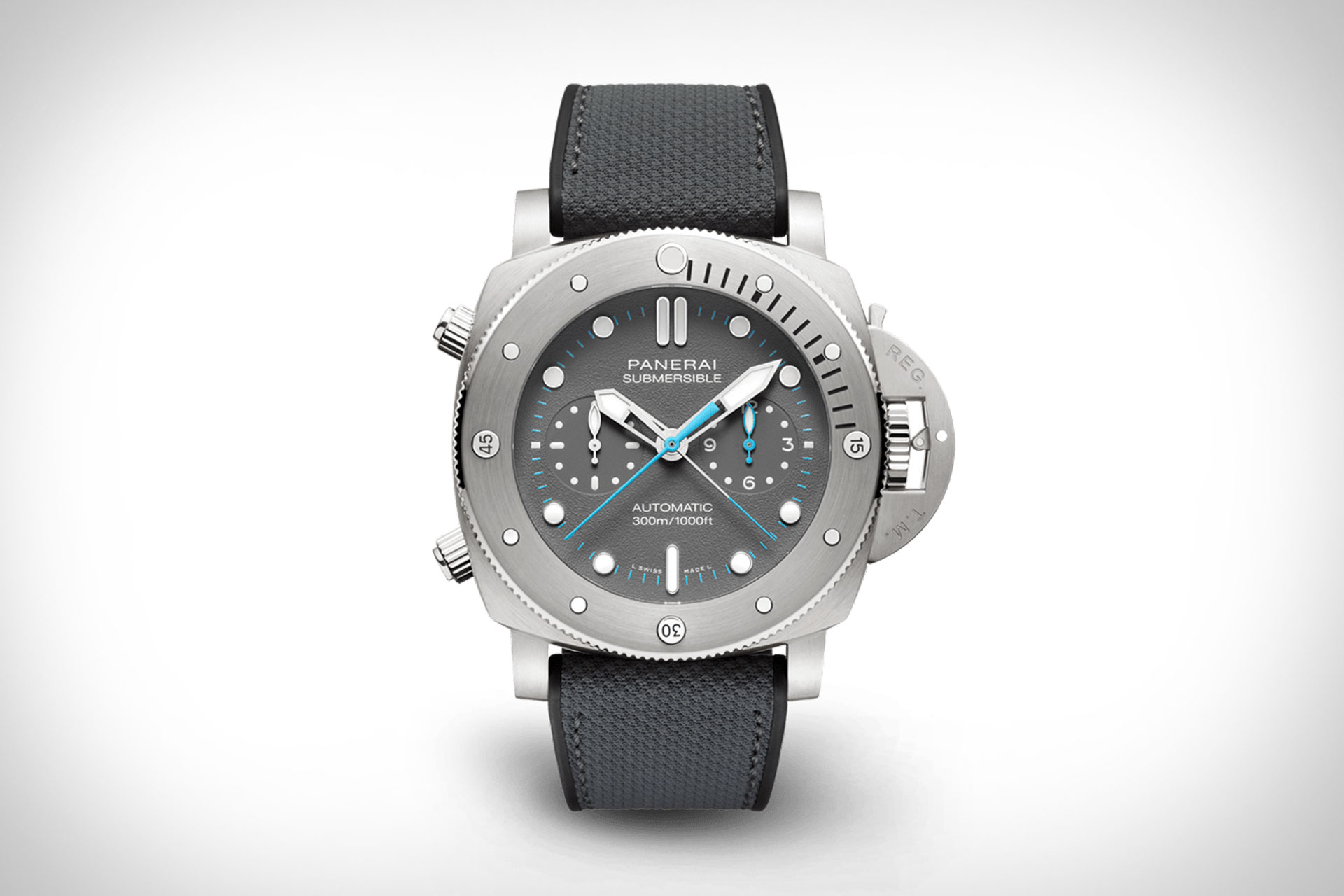 The watch features the same caseback etching as the 14-piece edition and is water resistant to 300 meters. The strap is made of rubber and technical fabric, and it is also sold with a separate strap made of recycled plastic.  It is sold with a tool to change the straps. The case of the 100-piece edition is not DLC coated and is brushed titanium with rotating bezel. The dial on this watch, though, is a pale gray – also with blue accents. Each of the 100 pieces retails for $19,400. 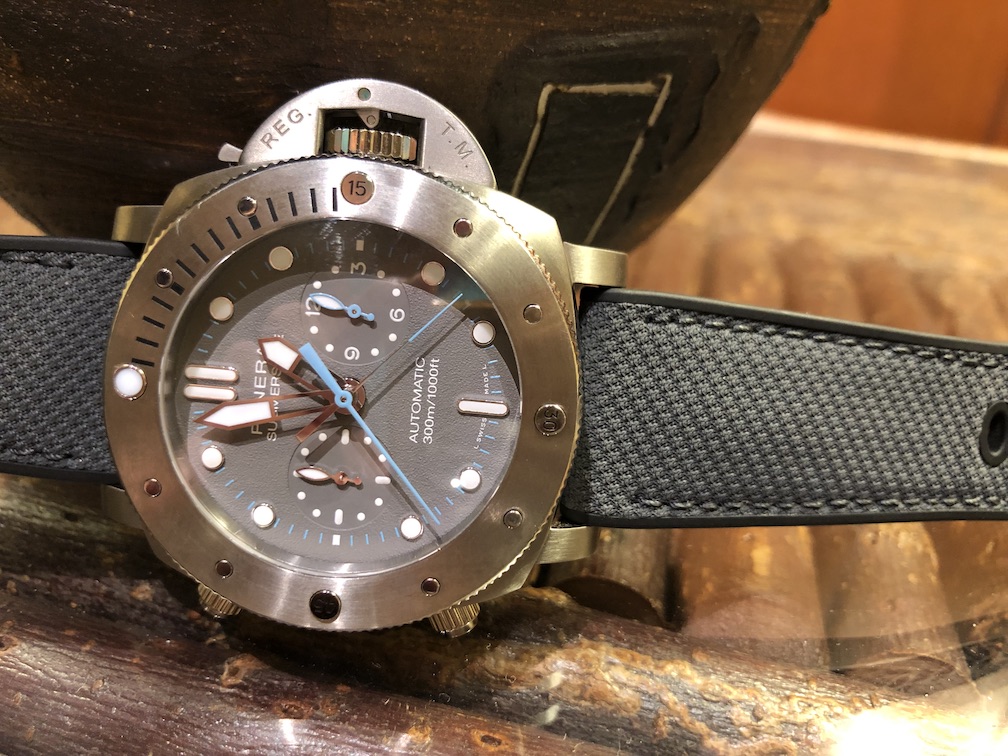 I Went To The Seaglass Rose’ Experience With Corum, Here’s What Happened
July 23, 2021