What Has 771 Parts, Retails for Just about $450,000 and Is Coming to Stores Very Soon? Up Close with the A. Lange & Sohne Zeitwerk Minute Repeater 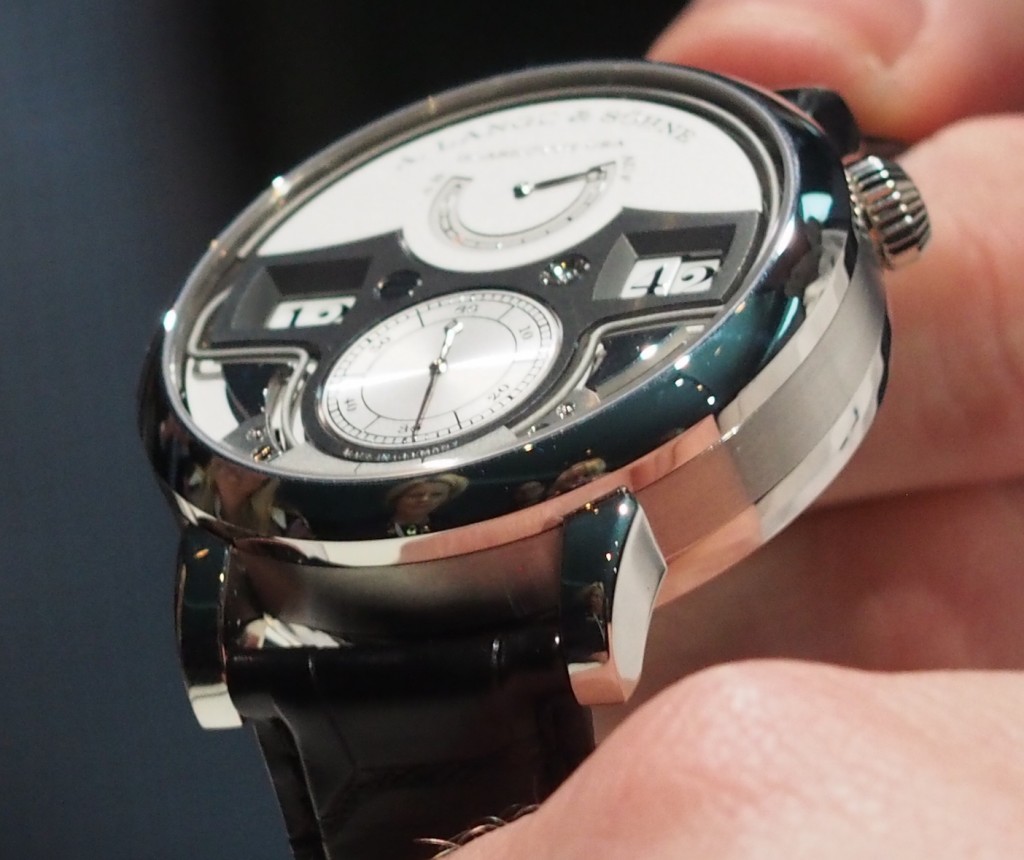 When A. Lange & Sohne launched the Zeitwerk line in 2009 and unveiled its digital display, the brand created an aesthetic that was something truly different from not only it’s other lines, but also from the high end watch community as a whole. The bold numbers that display the time via rings and disks instead of hands across the center of dial in a dominating and distinctive format laid the foundation for the brand to build different iterations of the iconic watch time and again.

This year, A. Lange & Sohne announced the release of the Zeitwerk Minute Repeater – which is hitting stores very soon — and it is every bit as technical as it is easily legible. The Zeitwerk Minute Repeater is not just any minute repeater. In fact, the complex movement houses a massive 771 parts. Additionally, A. Lange & Sohne puts its technical expertise to the test by creating a decimal minute repeater. More difficult to create, the repeater strikes the hours, ten-minute intervals and minutes (unlike most repeaters that strike the hours, quarter hours and minutes). To differentiate between the three types of notifications, a low-pitched tone is used to sound hours, a double tone for each elapsed ten-minute interval and a high pitched tone for the elapsed minutes. All of this is made possible by a constant-force escapement inside the manually wound Caliber L043.5 movement. 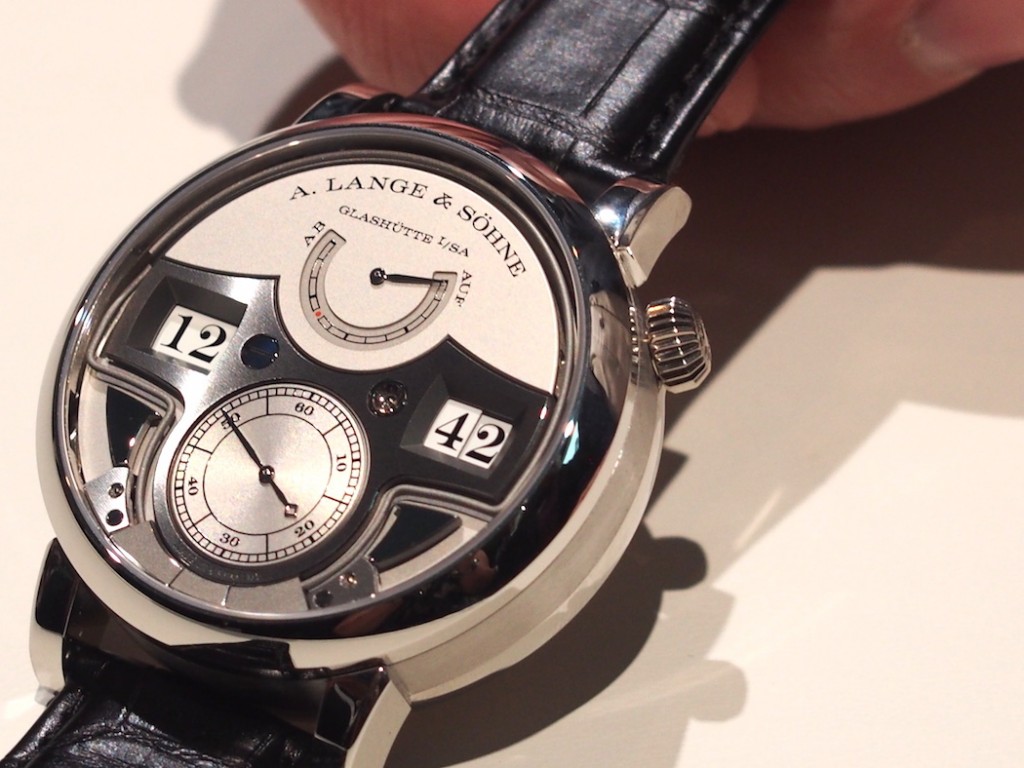 The movement consists of 771 parts, has a patented constant force escapement and offers jumping hours and minutes

To create the alluring timepiece, the engineers at A. Lange & Sohne embraced the iconic jumping numeral mechanism (two minute disks and an hour ring) of the original Zeitwerk and added to it to implement the acoustics. Three snails connect to these time-indication discs separately in order to determine the time and then sound it out via the chimes. As a result, the minute repeater stems organically from design of the first Zeitwerk, and the end product feels like a natural evolution. 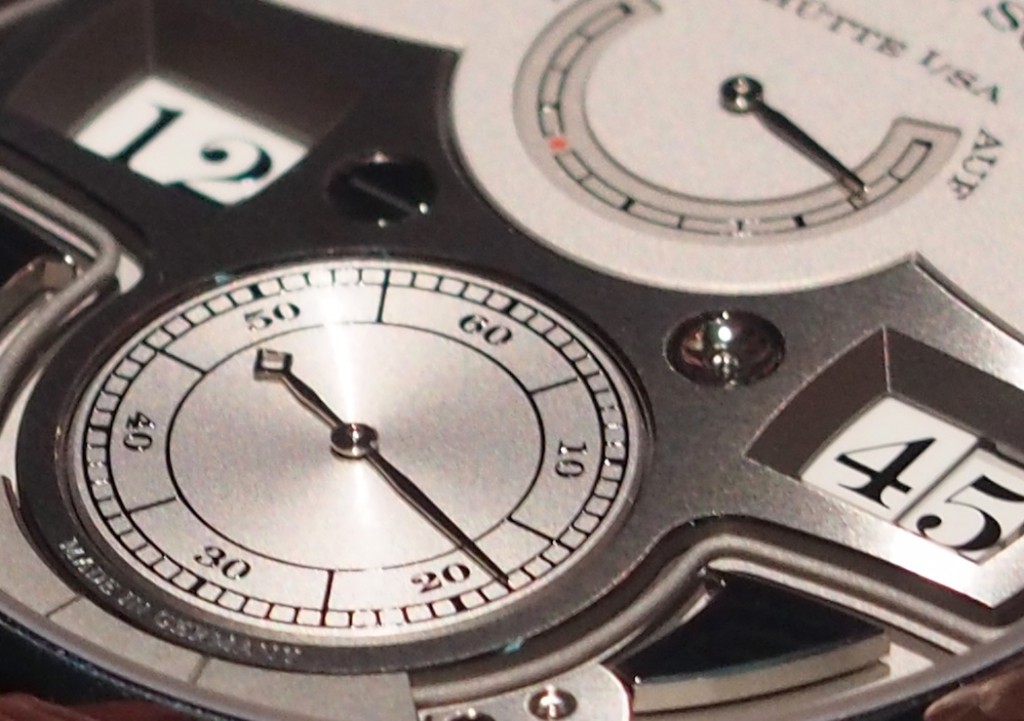 Instead of the slide used by most repeaters to engage the chimes, the Zeitwerk Minute Repeater uses a pusher system to activate the gongs. Additionally, as safety precautions are paramount with repeaters, A. Lange & Sohne has put into effect a number of safeguards to prevent user error. For starters, as setting the time while the repeater is in effect could potentially damage the movement, the crown cannot be pulled while the chime is active. When activated, the winding train is uncoupled from the ratchet wheel that powers it, preventing the winding wheel and train (including the crown) from turning while the gongs are being struck. This provides protection to the movement and also conserves energy for the piece. There is also placed a delay on the advancement of the time disc until after the chiming sequence has ended. This ensures that the time the chimes plays matches the time on the watch. Finally, the repeater function will not be available when the remaining power reserve indicator is less than 12 hours, which is denoted on the power reserve indicator with a red tip. This feature prevents the watch from running out of power mid chime and stopping the sequence prematurely. 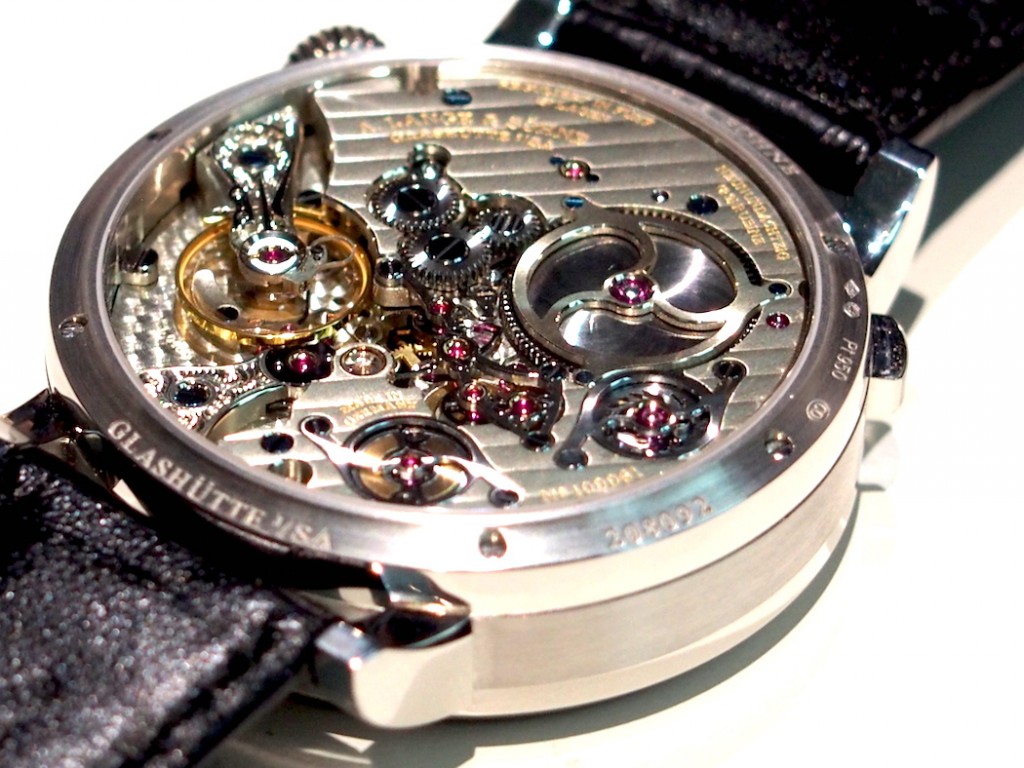 The team at A. Lange & Sohne coupled three snails for the striking mechanism to the hour and minute disks to work with the existing system.

The dial layout is immaculate and maintains the simple legibility the line is known for. The power reserve indicator is located at what would be the twelve o’clock position on an analog piece with the second hand at the six. The dial itself is solid silver in a rhodium hue and the time bridge that frames the digital display is done in black-rhodium German silver. The black polished steel gong hammers are viewable from the front of the piece. Predictably, the gong underneath the hour indicator chimes for hours and the other for minutes. To chime the double tones for the tens of minutes, both gongs strike in quick succession.

The watch is, naturally, masterfully finished both inside and out. Inside: a hand-engraved balance cock, balance wheel with eccentric poising weights and a free-sprung balance spring crafted in-house and impeccably finished. The 44.2mm case, which is impressive given that with the extra complication of the repeater is only 3mm larger than the base model Zeitwerk, is crafted in platinum. While not technically a limited edition piece, the resources required to create such a watch will limit production. The watch retails for just about $467,700. 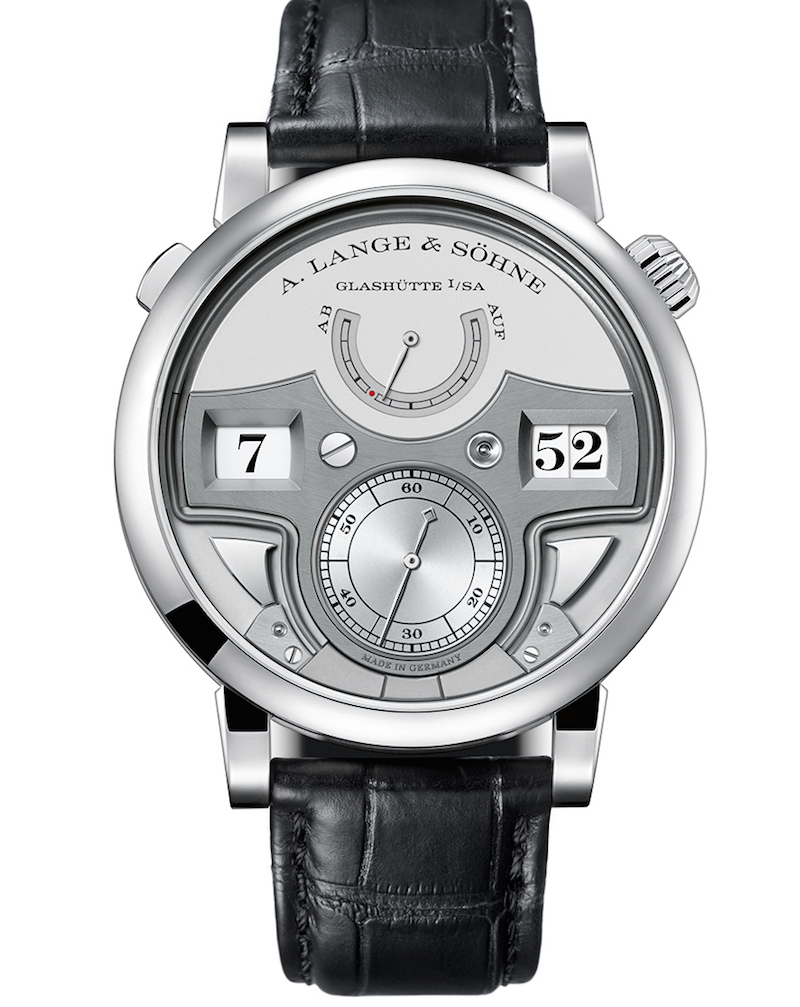 A. Lange & Sohne Zeitwerk Minute Repeater comes out just six years after the first Zeitwerk made its bold appearance on the scene