What Happens When A Brand Themes Its Direction For The Entire Year? Vacheron Constantin Tells All 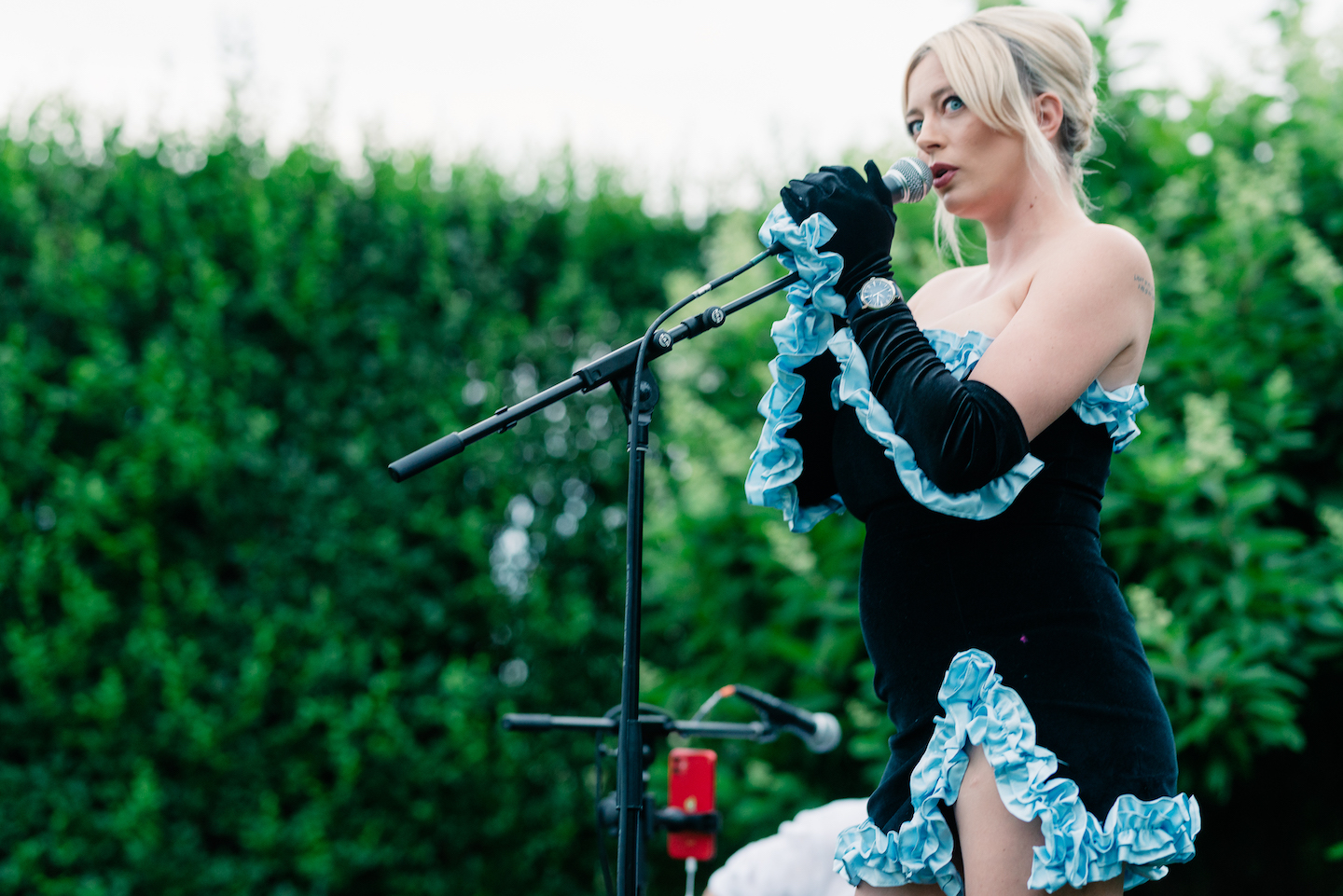 Caroline Vreeland sings at the Vacheron Constantin Anatomy of Beauty event in the Hamptons. (Image by Getty)

It was in March at the Watches & Wonders Geneva 2022 exhibition, that the longest continually operating Swiss watch brand, Vacheron Constantin, announced that this year, its unveilings (both product wise and event wise) would follow a themer: The Anatomy of Beauty. The brand, which crafts some of the most beautiful and technically advanced watches in the world, felt the theme underscored many of its goals, including the creation of beautiful watches, of sophisticated designs, of offering technical expertise, beautiful boutiques,  meaningful relationships and important causes.

It isn’t the first time a brand has selected a theme for the year. Many, including Vacheron Constantin, have done the same. But not many execute the theme to such a pervasive and yet inspiring consistency — especially in America. 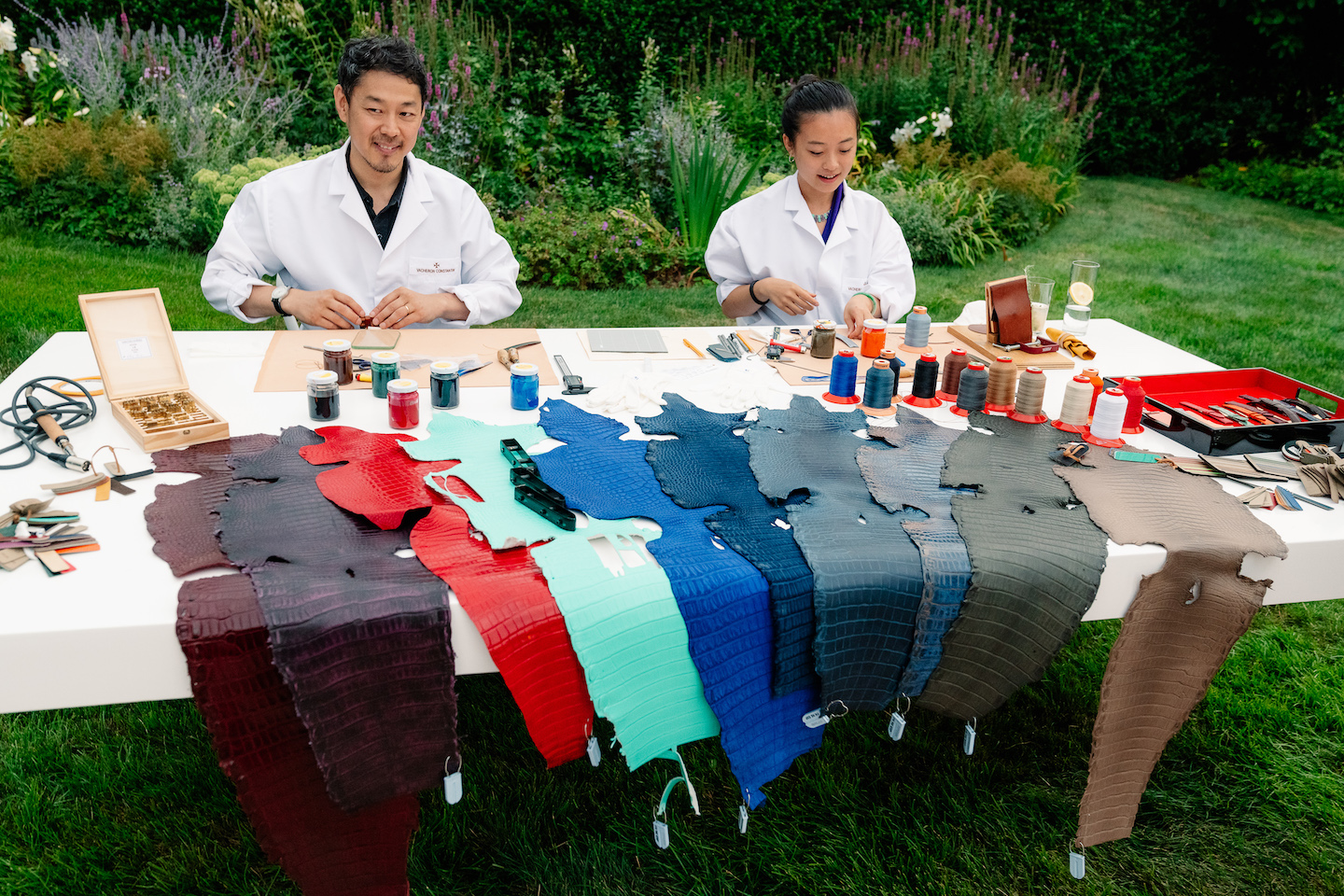 Vacheron Constantin Celebrates the Anatomy of Beauty in the Hamptons with Jayma Cardoso. Here: showcasing the making of straps.(Getty Image)

Throughout this year,the brand embodied the theme in a multitude of ways, including the event  in the Hamptons throughout the last weekend in July, where it created its own Vacheron Constantin Hamptons House to celebrate the exceptional new Traditionnelle Perpetual Calendar Ladies watches — its first ladies perpetual calendar pieces in the modern lineup.

Throughout the July 29th weekend at a private Hamptons estate that Vacheron Constantin turned into a secret-garden like escape, the brand hosted multiple events, including a look at watchmaking as art. It even brought in the experts from Jean Rousseau  to demonstrate the art of strap making and to showcase the diverse offering of multi-materials and colors for discerning customers who may want to order something very special. 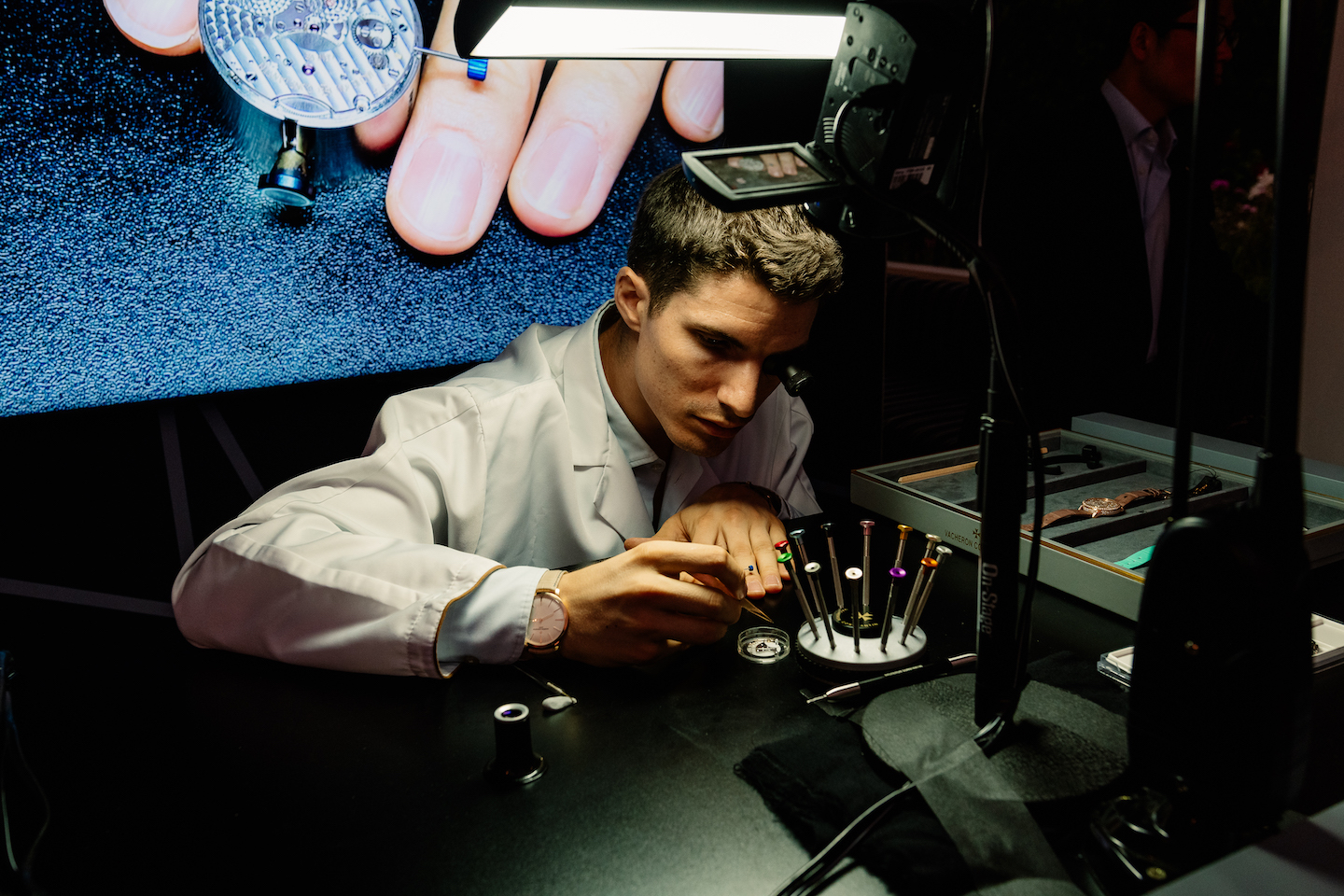 Jayma Cardoso, female business owner and entrepreneur who is the brains behind several New York hot spots, along with The Surf Lodge in Montauk, hosted the  Friday evening event, along with architect Antonio Di Oronzo. That night was a veritable socialite-studded event that consisted of a four-course menu curated by Hamptons Chef Yann Nury under a tent and at one of the longest tables meticulously set with white flowers and candles. The dinner was  followed by a musical performance by Caroline Vreeland, as well. Throughout the poolside dinner, watchmaking demonstrations were taking place alongside hands-on experiences with the complicated new women’s Perpetual Calendar watches.

The brand is no newcomer to the world of women’s watches and actually created ladies pocket watches at the turn of the 18th century. It went on to embrace the various diverse eras of our time, and excelled in the Art Nouveau and Art Deco era with stunning high-jewelry pieces, including secret watches and daring artistic pieces. 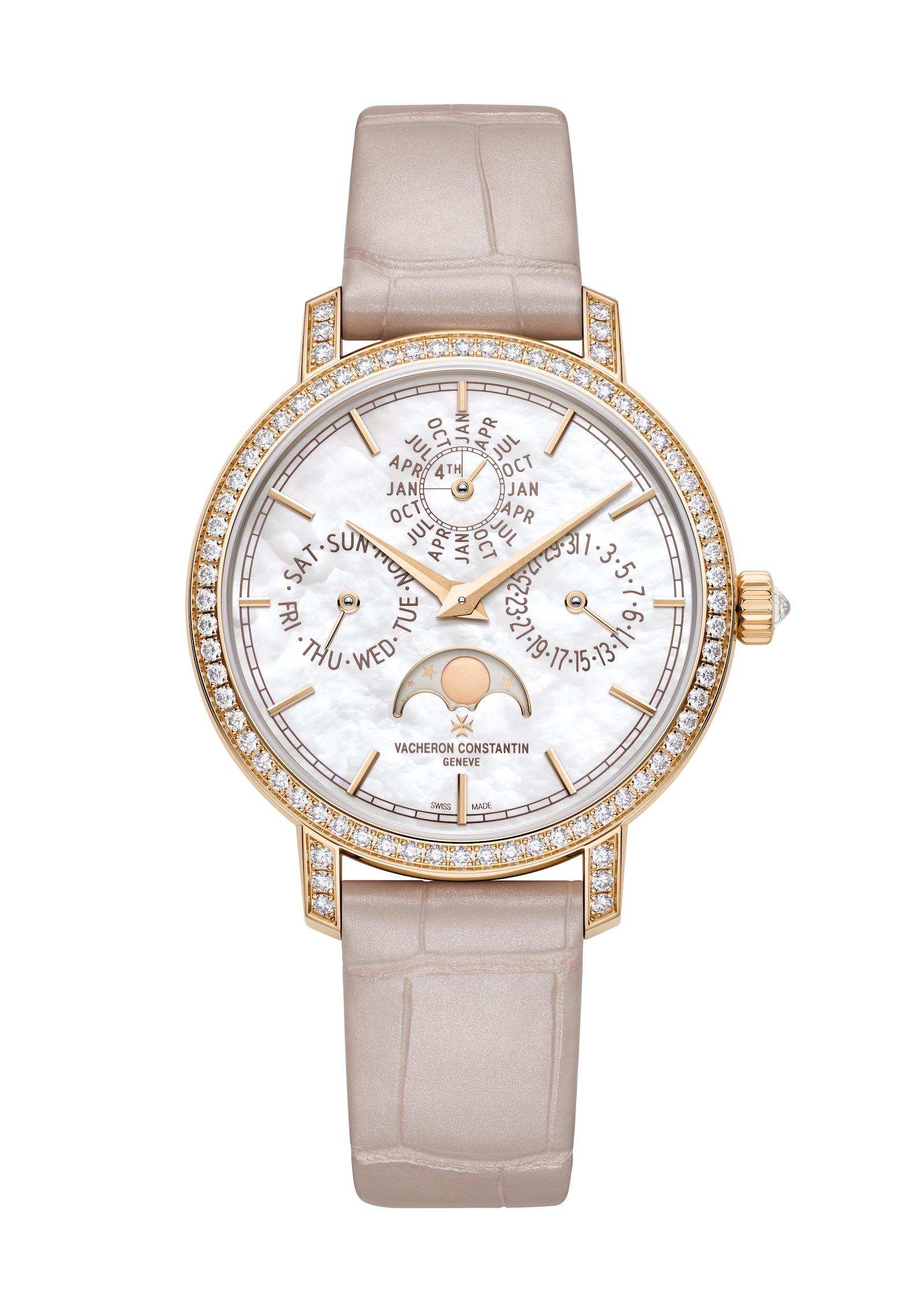 The Vacheron Constantin Hamptons House was the perfect place to showcase the brand’s watchmaking heritage and its prowess at sophisticated complications. The Traditionelle Perpetual Calendar Ultra-Thin women’s watches are powered by a 276-part n in-house calendar movement that displays the days, dates, months and years on a four-year cycle, including a leap-year indication, without any need for correction before 2100. A stunning moonphase display accentuates the beauty  of the watch. The 4.05mm thick movement is housed in an 8.43mm thick case, making it one of the thinnest women’s watches for the brand. With a 36.5mm diameter case, the watch offers stunning visual balance.

Two versions of the watch are offered, one each in 18-karat white gold  with a blue-gray mother-of-pearl dial and one in 18-karat rose gold with a white mother-of-pearl dial. Each features dauphine hands and a railway minutes track on the outer edges. A slimmed-down bezel gives the dial a larger appearance. The bezel is set with 76 round-cut diamonds. The watch is offered with an interchangeable strop that can be substituted for another with the simple touch of a button. Each of the two Traditionnelle Perpetual Calendar Ultra-Thin watches retails for $87,500. 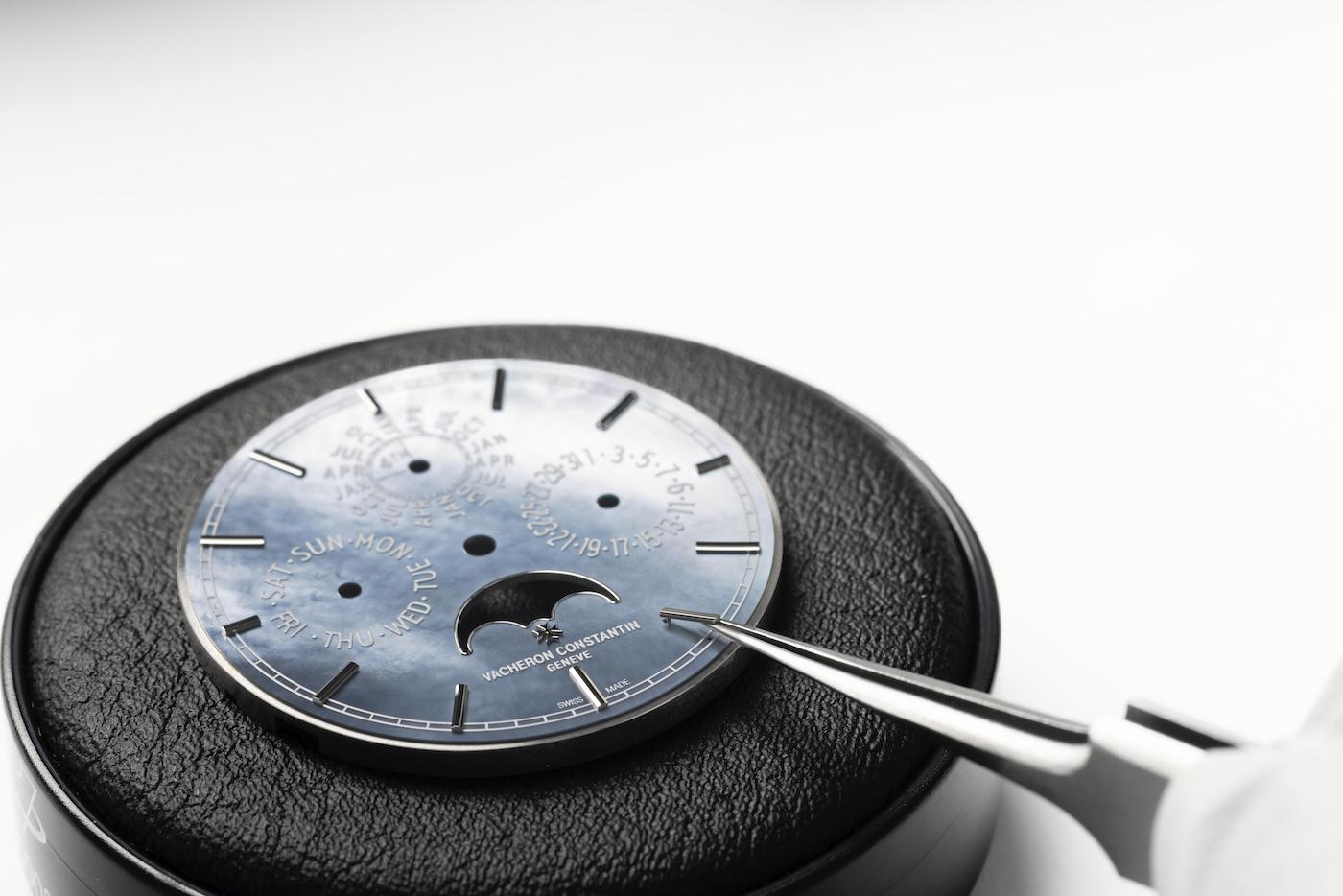 Additional Vacheron Constantin Tributes to The Anatomy of Beauty

Previous tributes in America to the “Anatomy of Beauty®” theme revolved around other timepieces and exciting news. Among them: the New York City Flagship boutique exhibit (still on through September at the flagship store)  that focuses on the  beauty of gem setting, skeletonization and métiers d’Arts. In addition to displaying a host of watches that boast such  beauty, the brand offers a look at the hidden treasures via an immersive experience that shines a light on nature and showcases intriguing photographs from artist Melissa McGill. Her work, entitled These Waters, offer larger than life depictions of coral and underwater beauty. 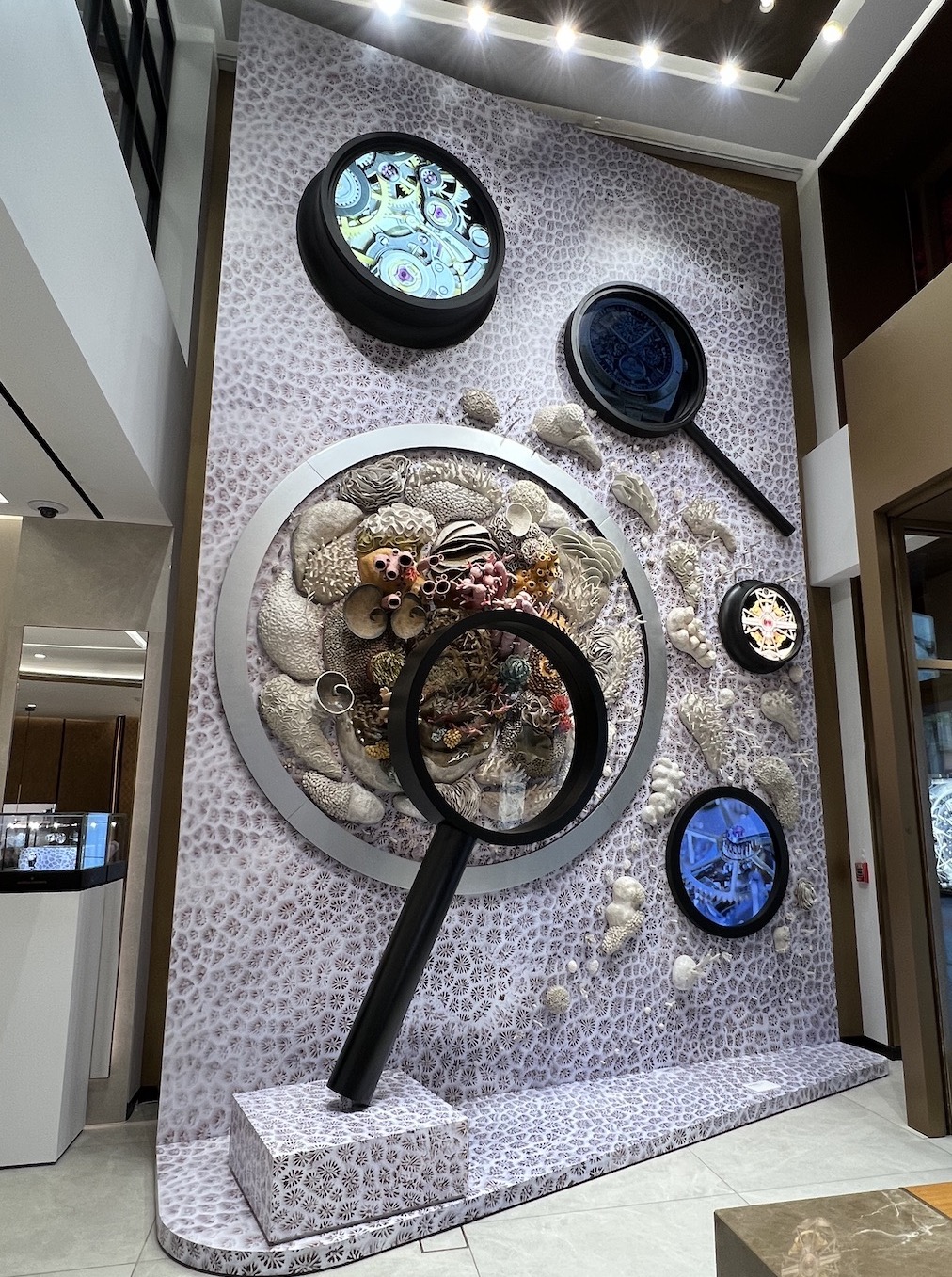 After that, Vacheron Constantin continued to celebrate the Anatomy of Beauty campaign with a host of celebrities in Los Angles, where it showed a short film entitled “The Anatomy of Beauty®” by director, producer and cinematographer Louie Schwartzberg. That event underscored the art of skeletonization. It was held in a lush garden setting in a private Beverly Hills home. The idea behind the short film project by Schwartzberg (the award-winning “father of time-lapse”) was to celebrate his signature filmmaking through a project that takes viewers on a metaphorical and physical journey to make the invisible visible.

“Coral-structures and skeletonized watch-movements suddenly take on a new relationship, their respective esthetic rhythms of plains and voids, shadow and light echoing one another’s carefully crafted surfaces. The entire composition of a watch movement, although mechanical, appears organic and filled with life as it operates – as lively as the meticulous work of nature which builds the openwork lace-architecture of the ocean’s coral, or the of the earth’s water waves as depicted in the film. It is in these details between nature’s work and the work of human hands, that is incredible, visceral, and undeniable, beauty.”

That event celebrated the Vacheron Constantin Overseas perpetual calendar ultra-thin skeleton watch, along with others. 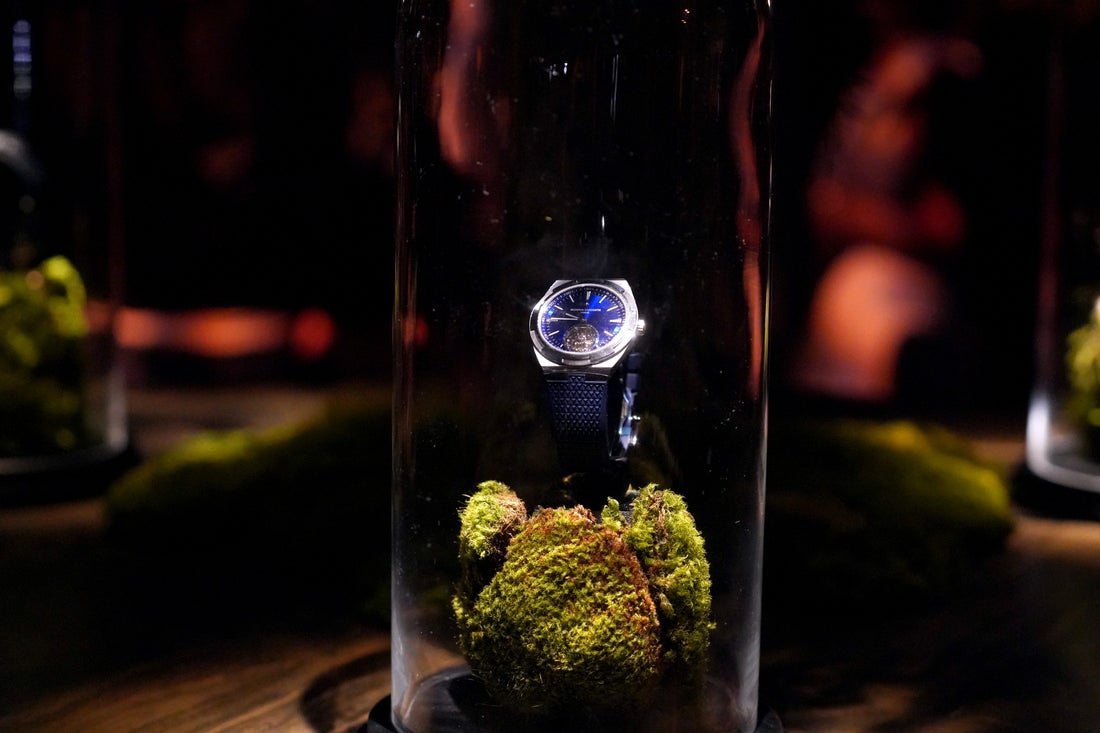 In short, in just six months, Vacheron Constantin has managed to light the watch collecting world on fire in America with its themed events that say true to the brand’s goals and with the release of some of the most alluring and beautiful watches for men and women alike. Knowing Vacheron Constantin in the Americas as well as I do, i am certain the brand has more “Anatomy of Beauty” tricks up its proverbial sleeve. Stay tuned; we’ll bring you more.