Watch Review: How the Luminox Black Ops Carbon Holds Up Under Fire 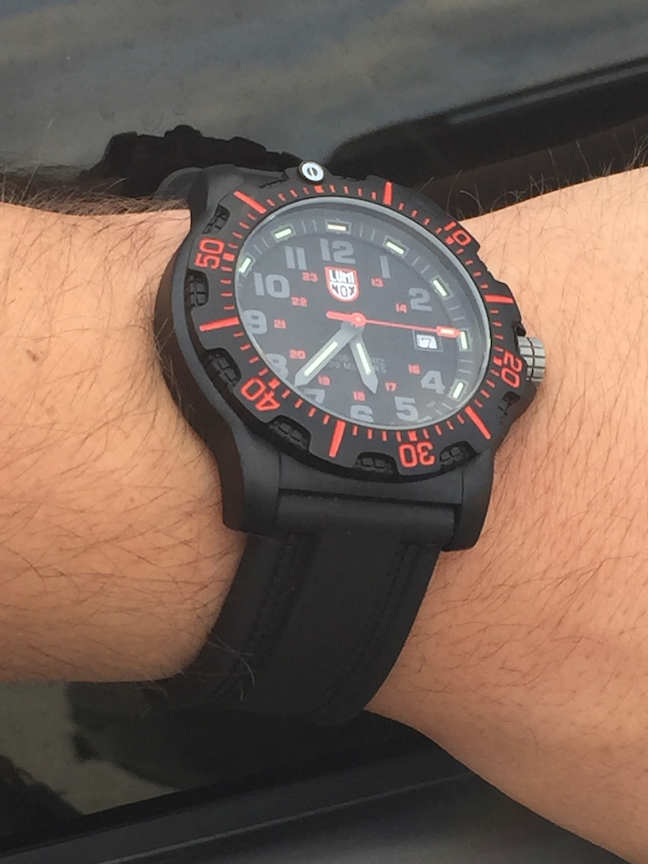 Six months of police academy training can be rigorous. The time frames are grueling in and of themselves, with 12-hour days often in 100+-degree weather. Training includes physical combat, high-intensity driving, marksmanship, more marksmanship and a lot of other facets. We are pepper sprayed, tazered and otherwise subjected to all things we can encounter every day on the job. That’s why the watch I wear has to be able to go the distance with me.

For the past month of training, I have been wearing the Luminox Black Ops Carbon 8815 (part of the 8800) watch. Luminox released the watch in 2009 as part of the brand’s 20th anniversary series. Today, it bears the name Black Ops Carbon, and it is made of a polymer compound that is reinforced for strength, durability and lightweight feel. This is a good thing because the watch performed strongly throughout all phases of my hand-to-hand combat, as well as target shooting. It’s precision wasn’t thrown off by the impacts it withstood. 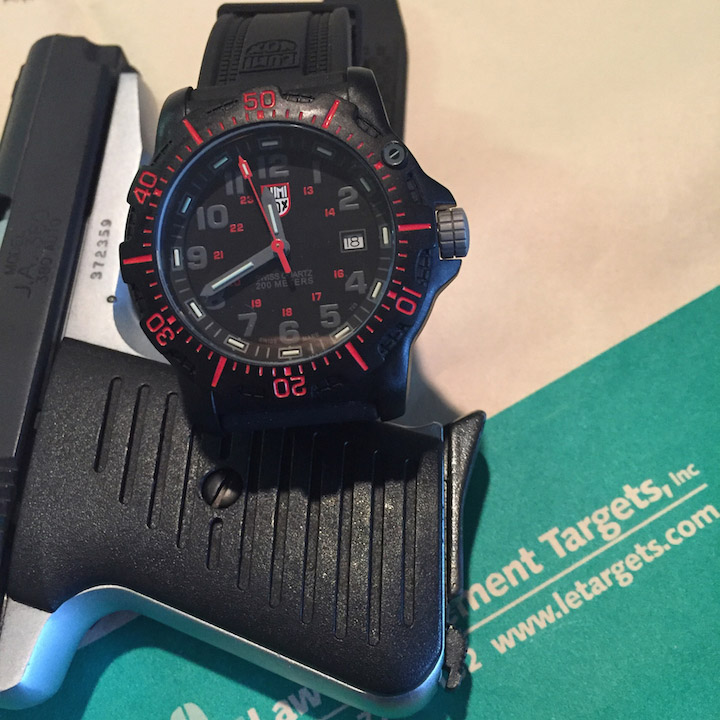 The case is made of carbon reinforced polycarbonate

I could shoot a shotgun or a Glock and there was no issue with its performance even after an hour of shooting/recoils. Another plus here is the way the strap fit the watch and fit the wrist. There is no gap between the watchcase and the strap starting, so there is no worry about it catching on anything or coming off, and when you bend your wrist, it bends with you easily.

I will admit, when I first took the Black Ops Carbon watch out of the box, I was surprised—and a little disappointed, maybe – in the lightweight feel. When I think of something being heavy duty and built to last I think of something heavy and big so its weight was surprising. But then, when I realized how advanced the carbon reinforced  case really is, I was happy. 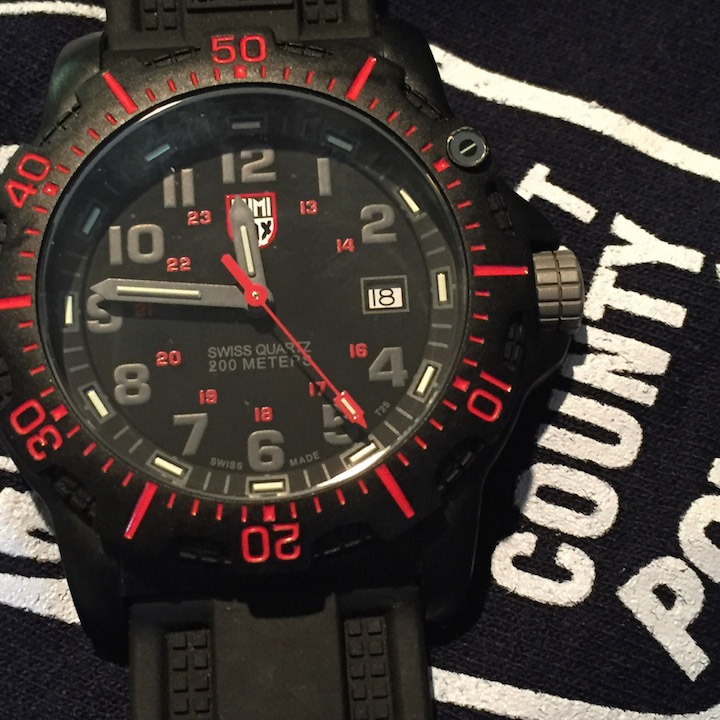 The Swiss watch is water resistant to 200 meters, and has a one-way rotating bezel, so it can also perform when water is in the itinerary—either planned or unplanned. The hardened mineral crystal is also a plus, because I wasn’t worried as much about scratching or shattering the crystal. The silicon polyurethane strap with textured pattern offers a nice look to the watch, but in 100-degree weather it did tend to get a bit sticky. When you are working in 110-degree weather, the strap seems to soak up the sweat so you have to wash it or shower with it every day so it doesn’t smell. That may be the biggest downfall, but it’s a minor inconvenience, though, because a leather strap wouldn’t hold up at all. 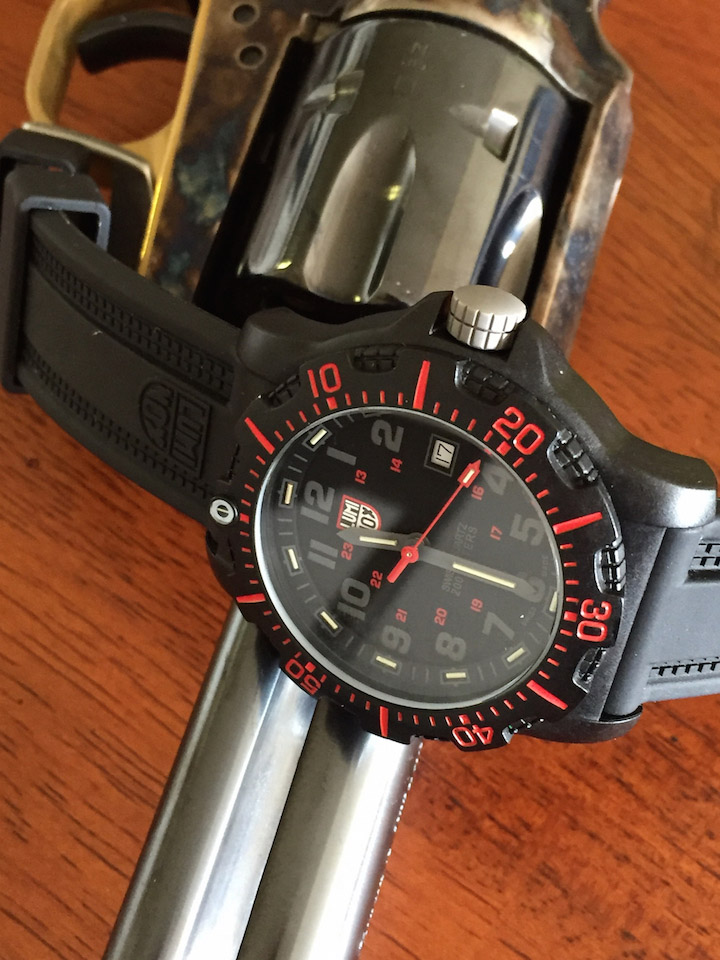 The markers above the numerals feature Luminox Light Technology

The watch also features the Luminox self-powered illumination – LLT, which means the blocks above the numerals and markers are bright at night because they are made of Night vision tubes that are said to last for 25 years. This is a nice plus for reading the time in the dark, but I wish my watch’s glow were a little bit stronger. You have to take a minute to focus on it to see the time at night. 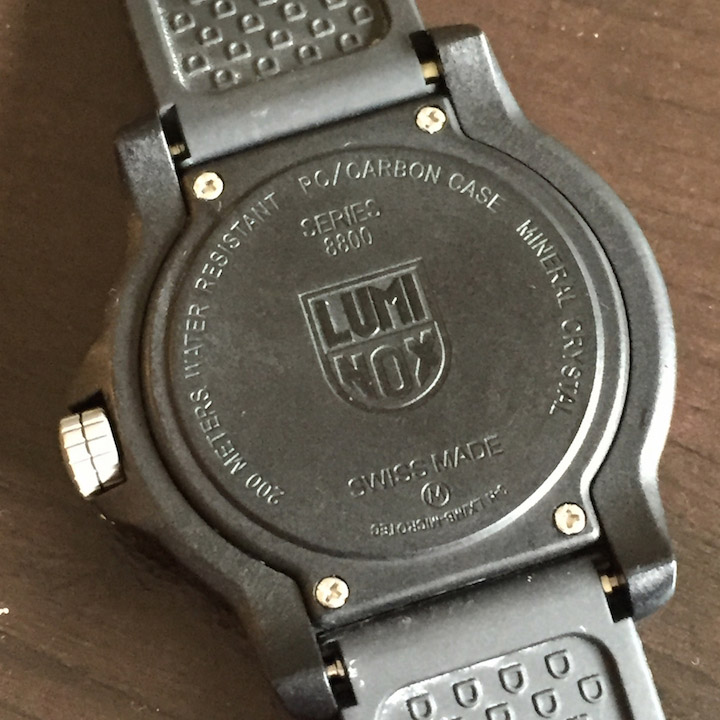 The Swiss-made watch offers a mineral crystal and is water resistant to 200 meters.

All in all, the watch, with its high-tech extra hard carbon reinforced polymer case and bezel seems the perfect fit for military, law enforcement and border patrol use. In fact a fellow officer owns a black and white Luminox (not as nice as this one) that is about four years old, and he and I talked for a while about the watch’s performance. What makes it even better is the fact that it works on a cop’s budget. It retails for $395.