Watch Collectors, This is For You: The Maitres du Temps Chapter Three Midnight Blue 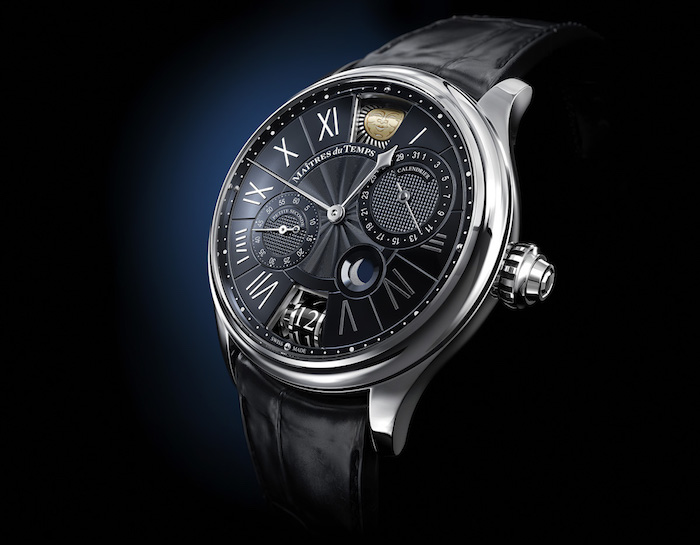 Aside from the perfect piece of carry on luggage, the dual time zone watch is the perfect travel companion for the business professional. Let’s be honest, looking unfettered while traveling across three times zones, keeping track of meetings across the globe and knowing the kids’ bedtime back home is challenging on the best of days. Well, with the release of the Maîtres du Temps Chapter Three Midnight Blue, the plane ride from JFK to Heathrow just got a lot more elegant.

Maîtres du Temps was founded in 2005 by watch veteran Steven Holtzman, and is based in La Chaux-du-Fonds, Switzerland. The concept of the brand revolves around bringing together watch masters to collaborate on creating new and unusual watches. The idea being that the collective sum of the masters’ experience is greater than their parts. Some of the past contributors have included Roger Dubois, Peter Speake-Marin, and Thierry Oulevay. 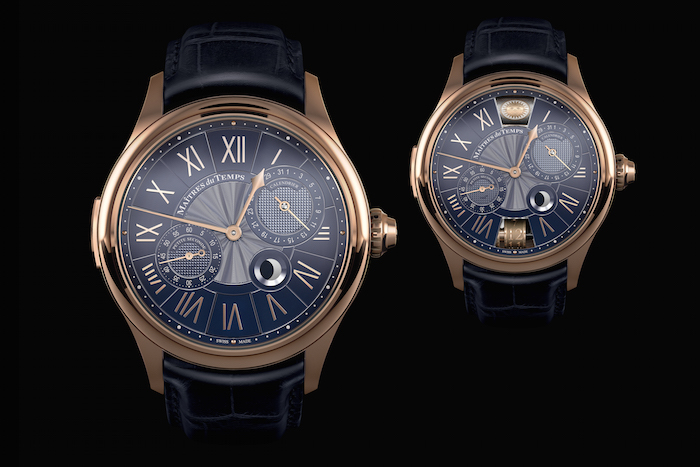 TheChapter Three in its open and closed positions.

For the all-new Chapter Three, Maitres du Temps has tasked Kari Voutilainen and Andreas Strehler – two great watchmaking minds – to create the piece. Kari is responsible for the design of the movement, and Andreas for integrating the movement with the watchcase and helping to design the reveal function. More on that in a bit. But we warn you- this is not for the feint of heart and if you aren’t into truly complex calibers and watches, you may just want to look at the pretty pictures. 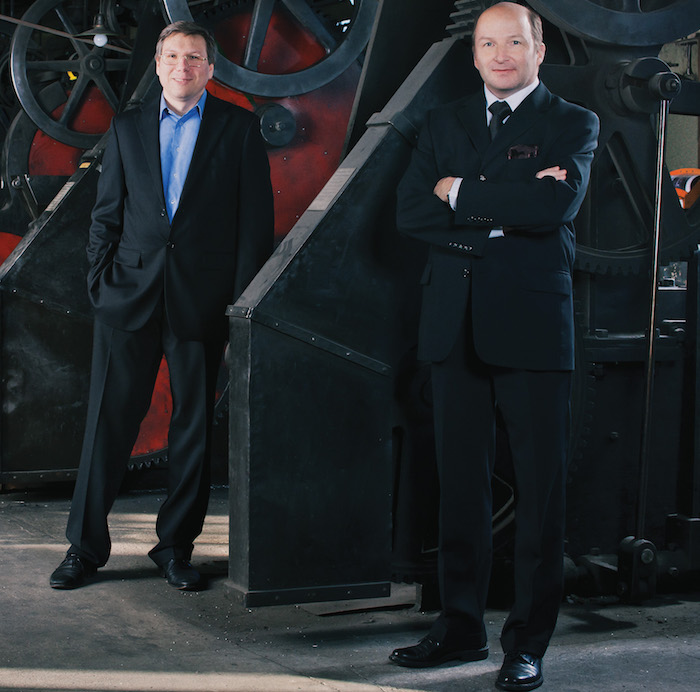 A number of things help The Chapter Three Midnight Blue standout in the marketplace. First, it is the first piece Maîtres du Temps has manufactured entirely in its workshop in La Chaux-du-Fonds. Second, similar to the previous Chapter releases, the Chapter Three has been given its own movement, the manually wound caliber SHC03. The 319-part movement is regulated by a Strauman balance spring with Breguet overcoil and a low-mas escape lever to improve the isochronism. Lastly, special attention has been paid to the coloring of the dial: an extremely rich and deep black color that, in areas of light intensity, will actually show either black or dark blue tone. It’s a subtle effect, but given how prone horology collectors are to studying the intricacies of their watches, this particular nuanced facet may garner as much attention as the watch’s movement. 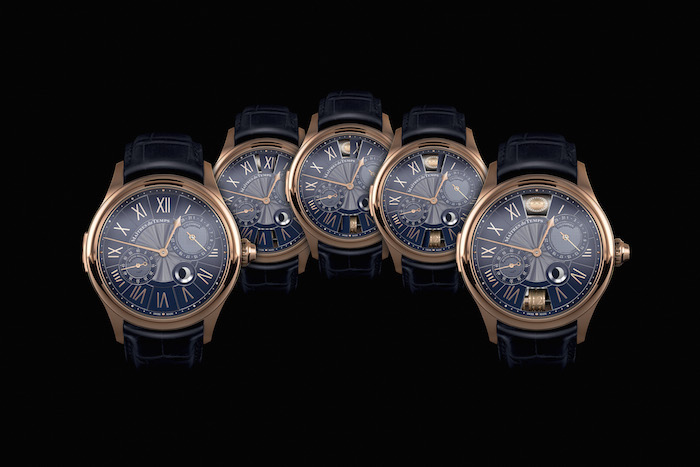 The sequence of the Reveal in the Chapter Three

The layout of the guilloche dial features both high-end traditional elements, as well as features that allow the dual time indication to be read at a glance. You will find 18-karat gold central hour and minute hands, an off-center subdial second hand at 8 o’clock, a date subdial located at the 2, and a moonphase indicator at 4:00. The subdials for both the second hand and date feature a guilloche ‘Clous de Paris’ and small name plates that indicate their particular functions. There is a beautiful guilloche sunburst pattern in the center and around the edge large San serif Roman numerals mark the hour indices.

If the story ended there, the Chapter Three would already make a compelling high-end watch purchase, however with a push of the button located on the crown, things get even more interesting. When the button is pressed, concealed panels at the 12 and 6 o’clock positions roll away to reveal the hand-painted faces of the day/night indicator and a digital second time zone display respectively. The day/night indicator requires 30 days of manufacturing that includes high precision machining, lining of hybrid ceramic, polishing, coloring of the sunrays and the stars through a galvanic process, and, finally, hand-painting of the faces of the Sun and the Moon. 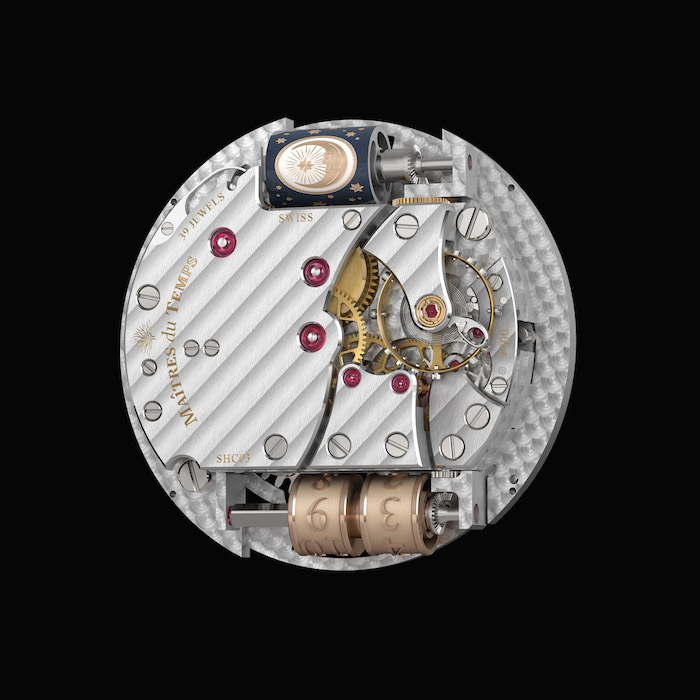 The complex movement consists of 319 parts.

The dual time zone hour indicator is listed on two different cylinders. Hours 1 through 6 are on one cylinder and hours 7 through 12 are on the other. The cylinder not in use slides horizontally out of view to give space to the other. Using the two cylinders allows the numerals to be as large as possible given the available space in both the revealed aperture and within the movement itself.  The approach is a novel one, so much so that the manufacturer has patented it.

Adjustments are made simply enough. The 0 position is used to wind the piece. The first position sets the moon phase and date, and the second position sets the time. The GMT is set via a pusher on the side of the watch. 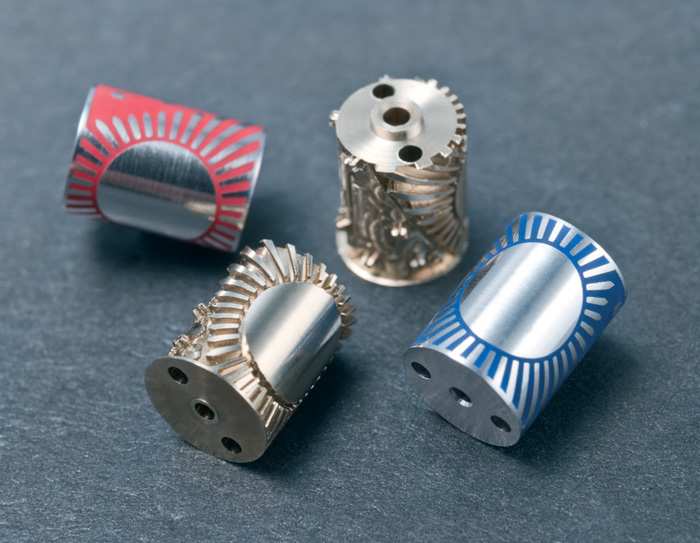 The cylinders of the Chapter Three Midnight Blue

The Chapter Three Midnight Blue comes on a 42mm 18-karat gold case that consists of 49 components, and serves as a compliment to the already released silver and anthracite versions. The piece comes on a black alligator strap with 18-karat gold deployment clasp and anti-reflective sapphire crystal on both the top and display back of the piece. It will retail for $96,100 — not too hefty a price to pay to have a watch on your wrist that is the result of a collaboration of these two masters of time.