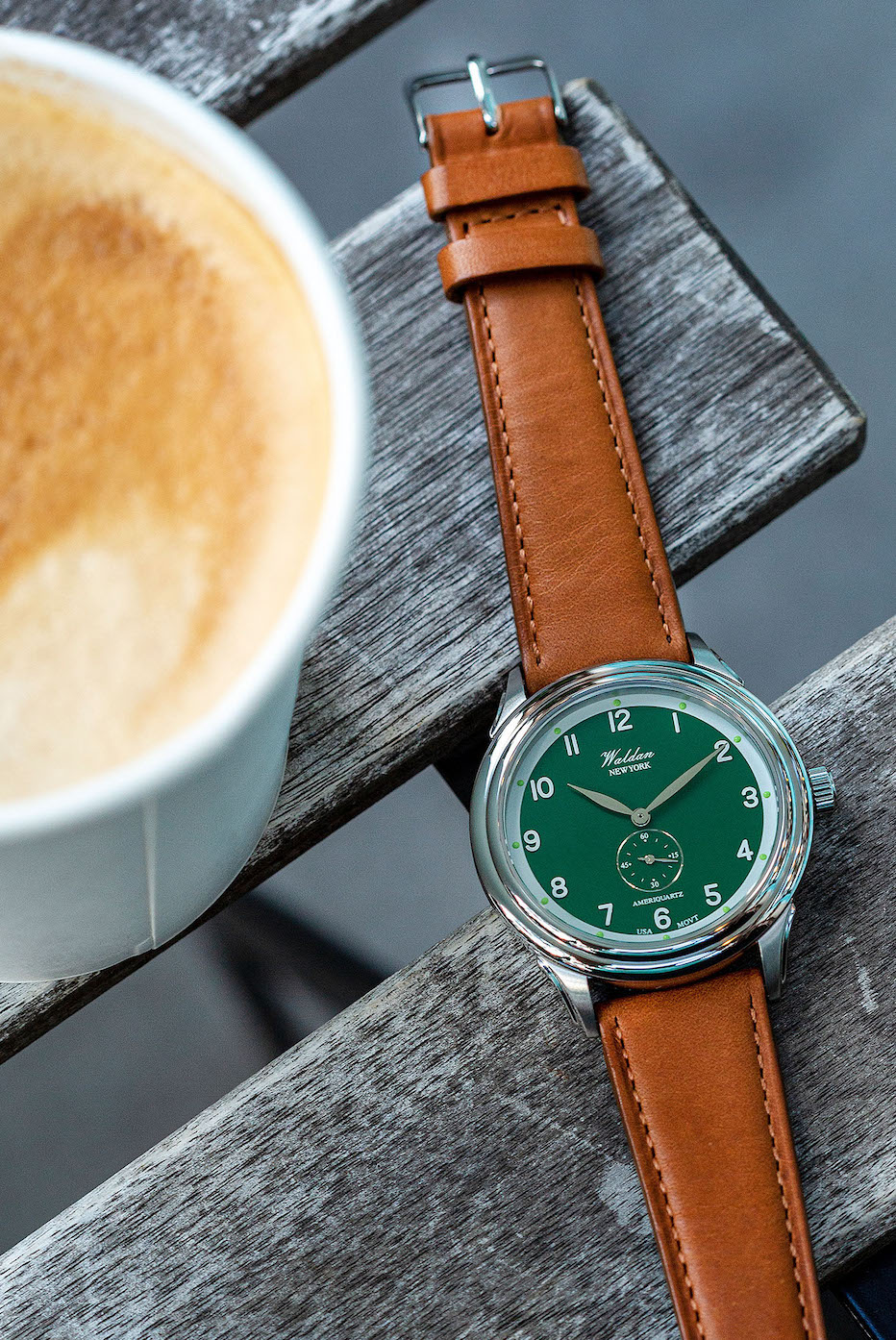 Waldan Heritage watch with bold green dial and stepped case is a study in vintage redefined, and the watch is assembled in America using American-made movement .

Those who are really familiar with the watch industry for multiple decades have likely heard of Waldan watches. The brand, founded by Oscar Waldan in 1979, was all about creating classically elegant timepieces with mechanical watches —  something almost no one believed in during the blaring quartz era. But Oscar Waldan, who had spent decades in the watch world after surviving two concentration camps during World War II as a watchmaker, insisted on mechanical movements for his timepieces, which generally sold for about $7,000 to $10,000. Now, his son reinvents the family owned business – bringing the brand back to New York and building the timepieces in America at attainable prices.

During a digital launch just a few weeks ago, Andrew Waldan said he wanted to remain true to his father’s vision, but recognized he need to answer today’s consumer demands. Andrew took over the family business – which he grew up in – in 2017, when his father’s health began failing. In 2018, following his father’s death, Andrew took over the ownership and reigns of the brand – working to revitalize it via a rebranding of the name, adding e-commerce and establishing a stronger digital presence. He also set his sights on the product. 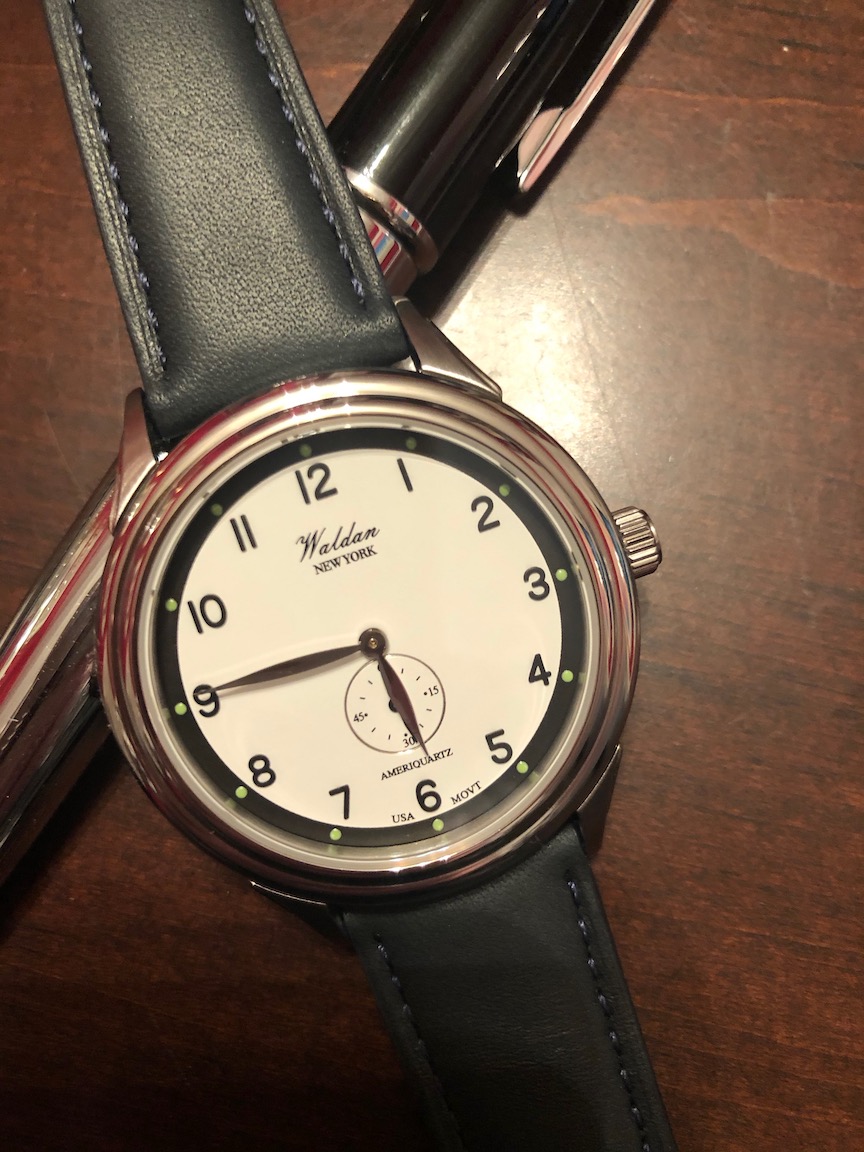 As a young CEO, Andrew Waldan vowed to make classic watches indicative of the brand’s DNA, but to do so at an accessible price.  He also made the very bold decision to abandon the sometimes-too-coveted “Swiss Made” label and bring the assembly of Waldan watches to America, where the brand was founded and where his father pushed forward to achieve the American Dream.

Andrew strays a bit from the traditional Waldan way by moving away from mechanical movements for this collection but assures us that future collections will boast mechanical calibers. For this rebirth of the line, though, quartz was a necessity. Over the course of more than a year, Waldan and his technical team, studied all options for the movements, finally turning to Ameriquartz, located in Arizona. 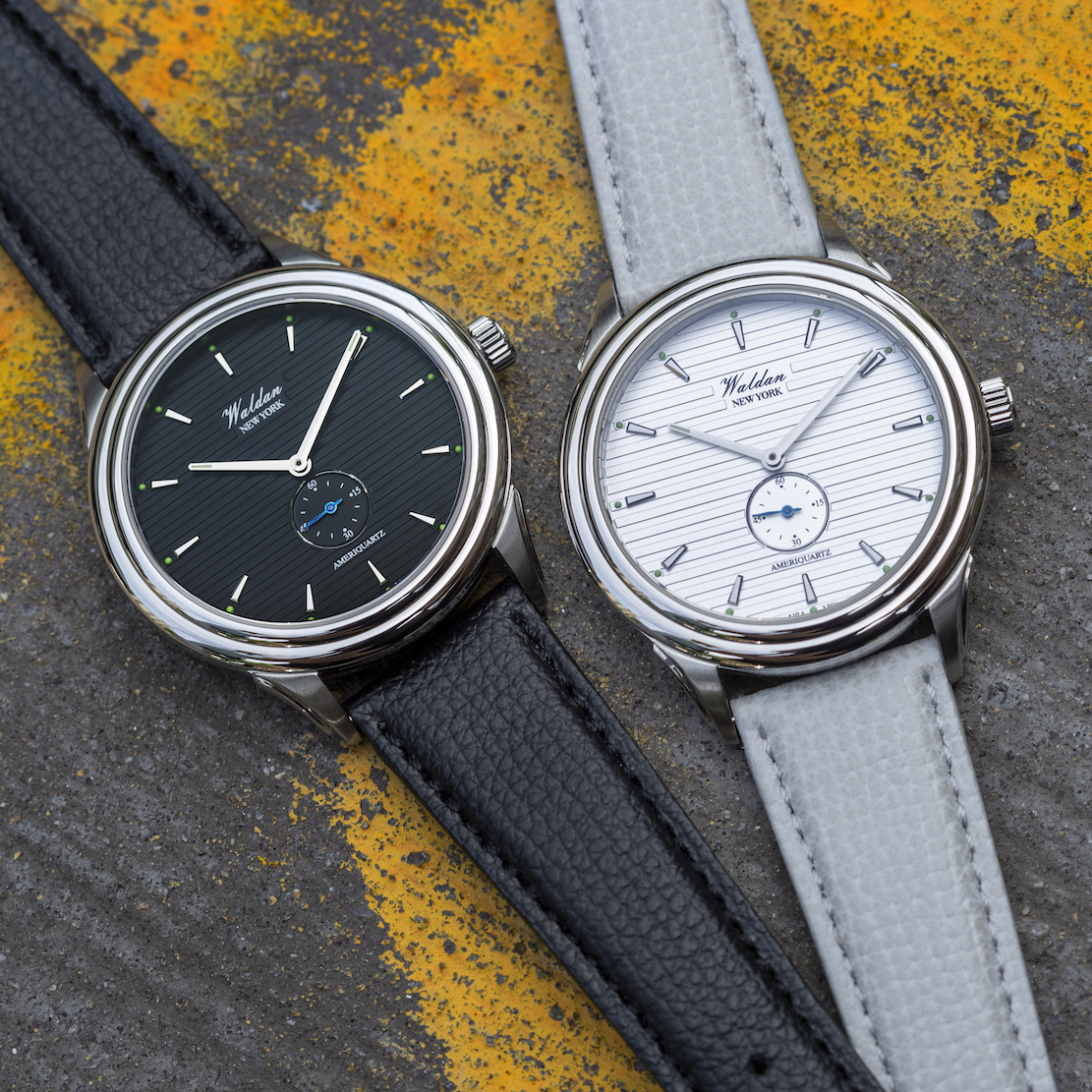 By working with Fine Timepiece Solutions out of Fountain Hills, AZ, to develop and build the Heritage line, Waldan watches comes full circle in America.  The watches boast all-metal American-made Ameriquartz calibers that have a five-year warranty – making Waldan the only brand authorized to use the Ameriquartz trademark on the dial of their watches. The watches are hand-built in the U.S.A according to a proprietary ATAC (access, test, assemble, certify) Zero-Defect protocol.

Each 40mm Waldan Heritage watch boasts the Waldan New York logo at 12:00 with the Ameriquartz name and “USA Movt” on the dial at 6:00. The watches are crafted in stainless steel with classically elegant double-stepped cases.  All watches are water resistant  to 50 meters and feature an anti-reflective sapphire crystal. The watches also feature a small subsidiary seconds hand at 6:00.  Retail prices are highly affordable. In fact, the Waldan Heritage Collection, that consists of six different versions, retails for $299. 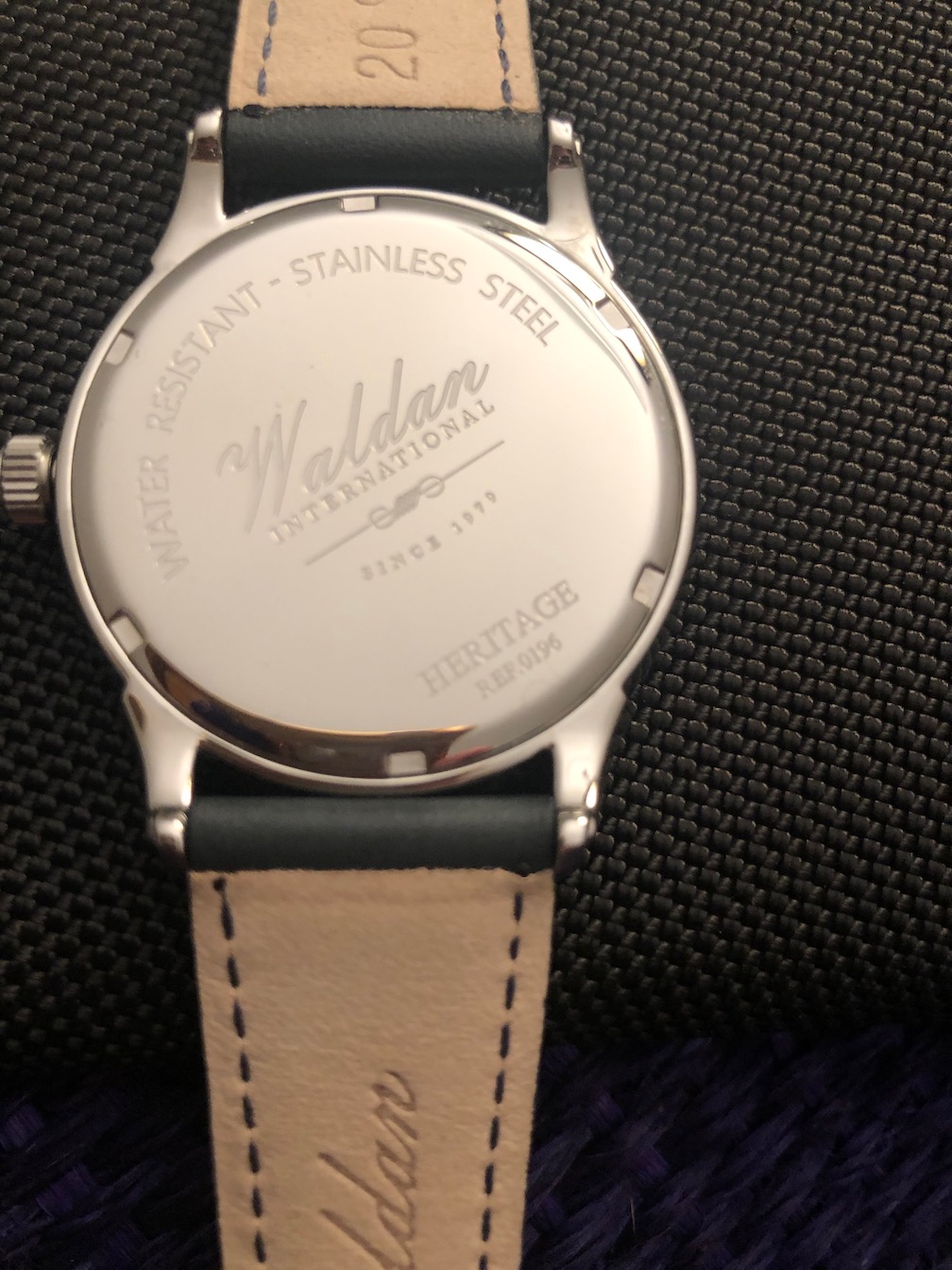 The Waldan Heritage watches are assembled in America and house American-made movements. They retail for $299.

The Heritage Professional models are offered with a stark white or off-white dial (with black numerals and inner flange), or with an Onyx black dial (with white Arabic numerals). There is also a Heritage Professional model with a striking Racing Green dial and white Arabic numerals (my particular favorite). Additionally, Waldan releases two Heritage Sportline watches with a dial pattern of horizontal lines from top to bottom. These dials are in Silvered White or Jet Black.   The Heritage Sportline watches feature applied markers instead of Arabic numerals and the hands are coated with Super-LumiNova.

I wore the Heritage Professional watch with stark white dial. I admit, the green dial version is my absolute favorite because the color is so bold and it is the perfect match for the classical stepped case, but the white dial with contrasting black numerals is really very striking and certainly much more versatile. It matches everything so it can be worn on a regular basis – something I wouldn’t do with the green dial watch. 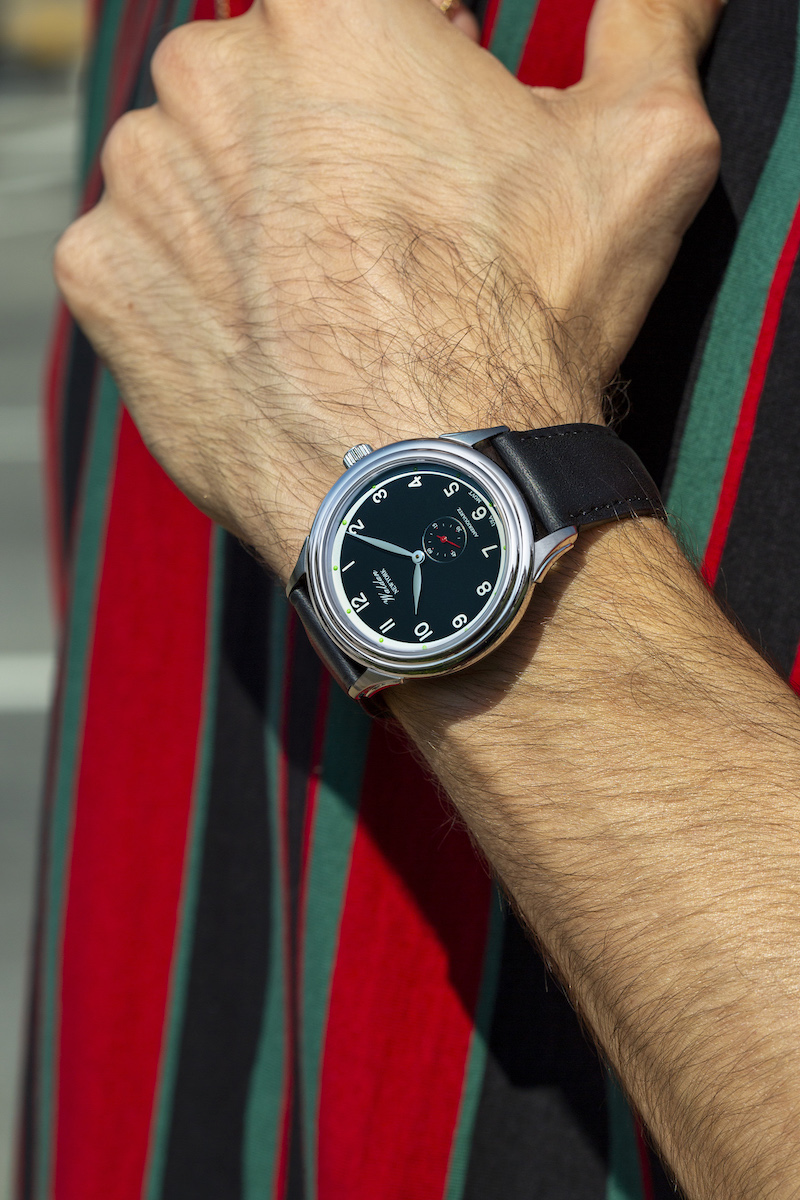 The 40mm size is a great fit for any wrist. Because the case is stepped and bezel-free, it is not too large or in your face at all. In fact, the stepped case gives it an ergonomic look and pushed the watch slightly more into the classic realm. The watch is clean, simple, chic. And I especially love that its made here in America with an American-made movement that has a five year warranty on it. I think that being headquartered in New York City, and relying on an Arizona-based company to supply the heart of the watch, and building/assembling the watch in US soil just has a certain cache.