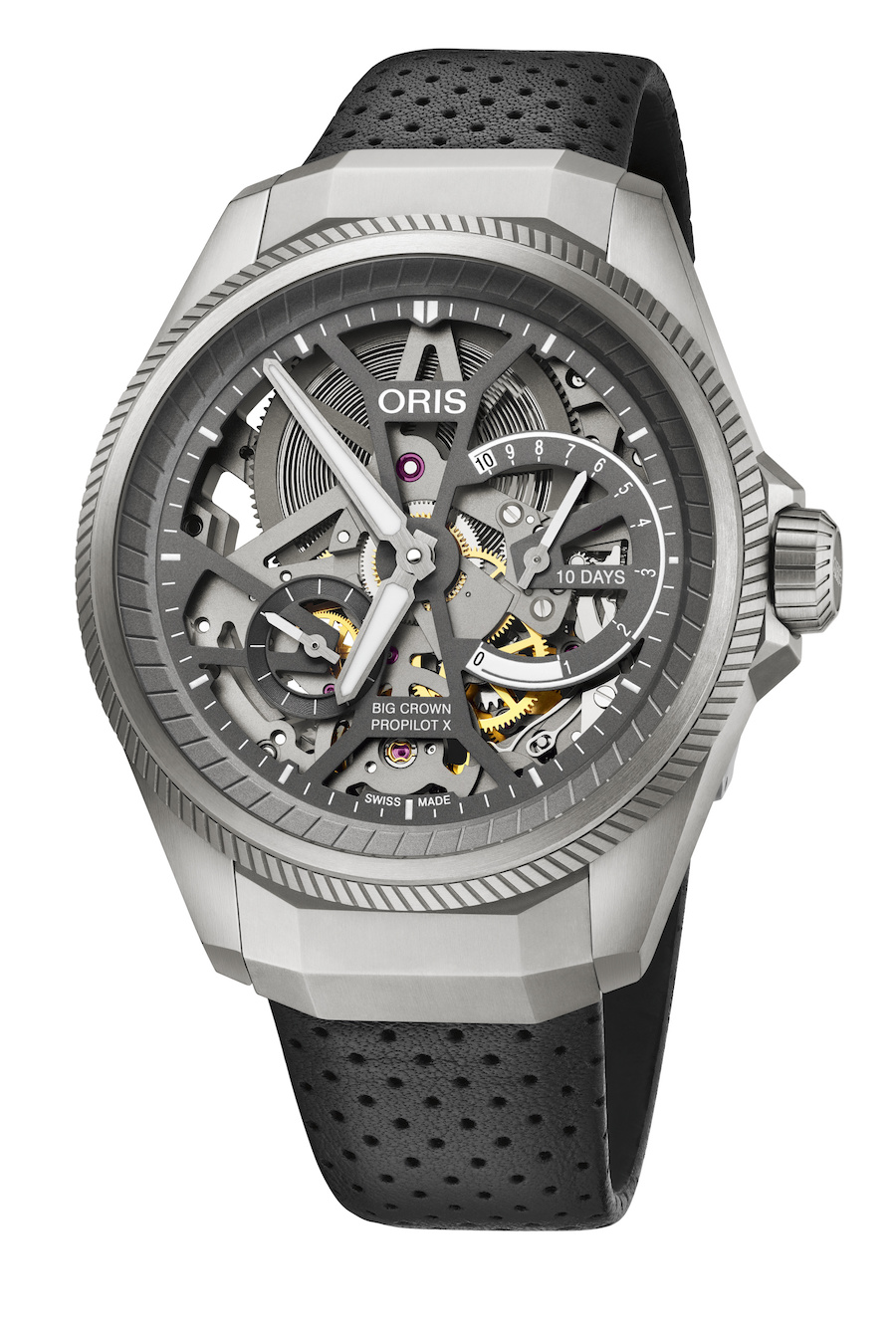 Back in June during the Couture Time show, Oris brought me behind a black curtain in its exhibition space and showed me a top-secret virtual reality movie of its soon-to-be-released watch: the Big Crown ProPilot X Caliber 115 watch. It was a blend of a James Bond-like secret mission to go behind the curtains and a sci-fi reality journey into the workings of the brand’s totally new in-house-made movement. The watch made its official debut recently, but we waited to talk about it until we had the chance to go fully hands-on with it and to meet the execs. After all, this is the biggest global launch in Oris history.

This past weekend at WatchTime New York 2019, I met with Rolf Studer who gave  brief explanation of the watch in the video below (which also ran on ATimelyPerspective instagram page and on Roberta Naas You Tube channel).  Have a look at the video and then, if interested, scroll down to read all the details on this powerful new timepiece that sets new standards for the independent brand.

According to Oris execs, the watch is a pure evolution of the brand’s expertise and experience. It was two years in the making and feature a skeletonize movement that is designed to let people see inside and understand how the mechanical movement works. Even the barrel is skeletonize so that the wearer can see the mainspring. As one winds the watch crown, he or she can witness the mainspring as it coils tighter so it is fully wound and ready to supply 10 days of power reserve. Additionally, instead of finely finishing and engraving the movement parts and bridges, they are laid bare in their natural state in matt gray for an open and stealth look inside.

The 44mm case of the watch is inspired by an Oris Big Crown watch from the early 20th century and is crafted in brushed titanium. The look of the watch underscores several important things: Oris’s dedication to function and performance. Fancy colors, fine finishes don’t improve the excellence of thewatch and by leaving those off of the ProPilot X Caliber 115,  the watch seems uncannily down to Earth — a beauty in  its raw form. 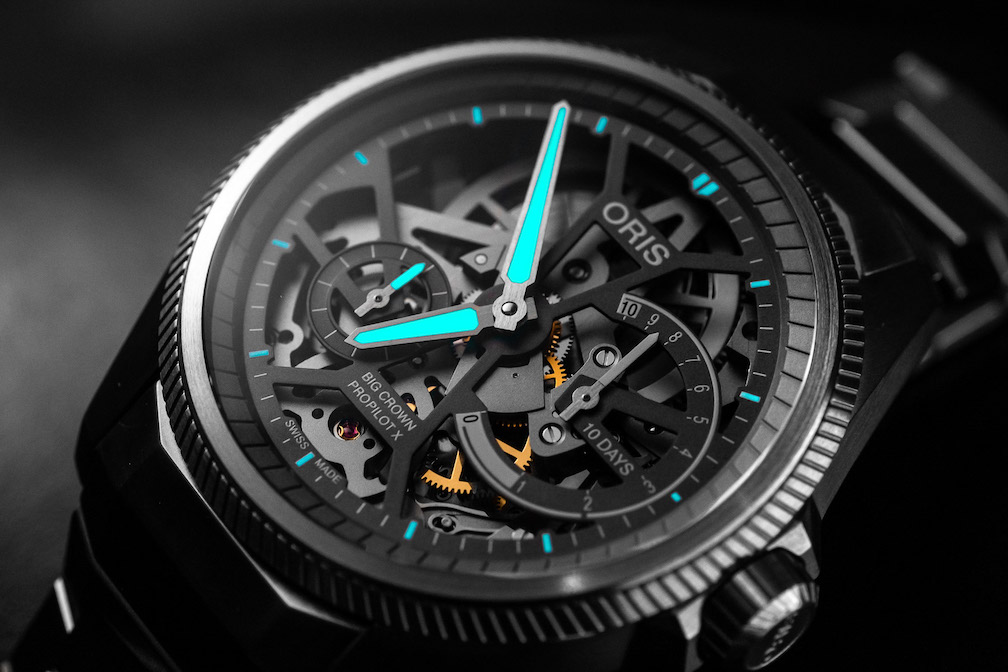 The power reserve indicator is a painted non-linear display that shows the power remaining. There is also a small seconds indication. It is a pilot’s watch but it is also the first Oris watch to be devoid of numerals on the dial. It is designed for the wearer to discover the watch movement time and again. With a tag line that reads “Go your own way,” Oris does just that. 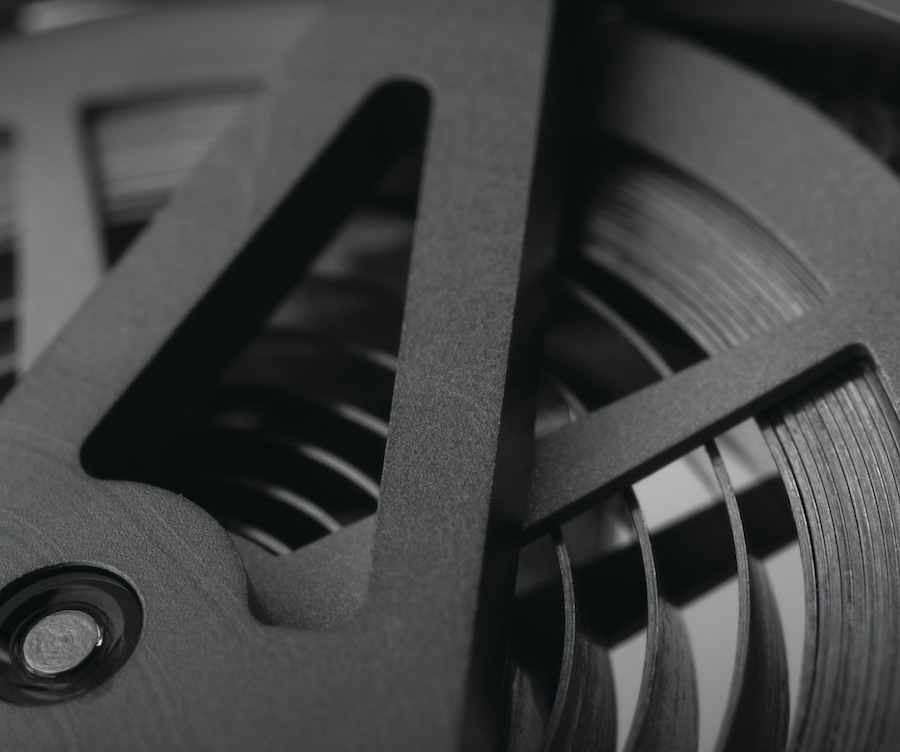 Oris ProPilot X Calibre 115 features a skeletonized movement devoid of special finishes and cuts — enabling the wearer to journey right to the heart of the origin of the movement.