British brand Bremont continues to make British watchmaking history …. and general watchmaking history, as well. This brand regularly unveils chronometer watches of new and different magnitudes, creating pieces for military around the world, pieces sold only to those who have ejected from a Martin-Baker ejection seat, and more. The brand is also well known for incorporating pieces of history into its watches, as with a Wright Brothers rendition a few years ago.  Recently, we got to go hands-on with the brand’s H-4 Hercules watch — a chronometer that commemorates the “Spruce Goose” plane built by American Howard Hughes.  Here, we bring you an original video describing the watch. Below, in more details, you can find out all about the watch and its incredible plane/boat inspiration.

About the Bremont H-4 Hercules And the Spruce Goose

The new watch, as explained so deftly above, is a chronometer that celebrates the largest aircraft in the world that was built back in the 1940’s. Made out of Birchwood (and nicknamed Spruce Goose), the H-4 had a single minute of flight on November 2, 1947, as Howard Hughes proved to the world that the plane/boat that he spent years building could really fly. 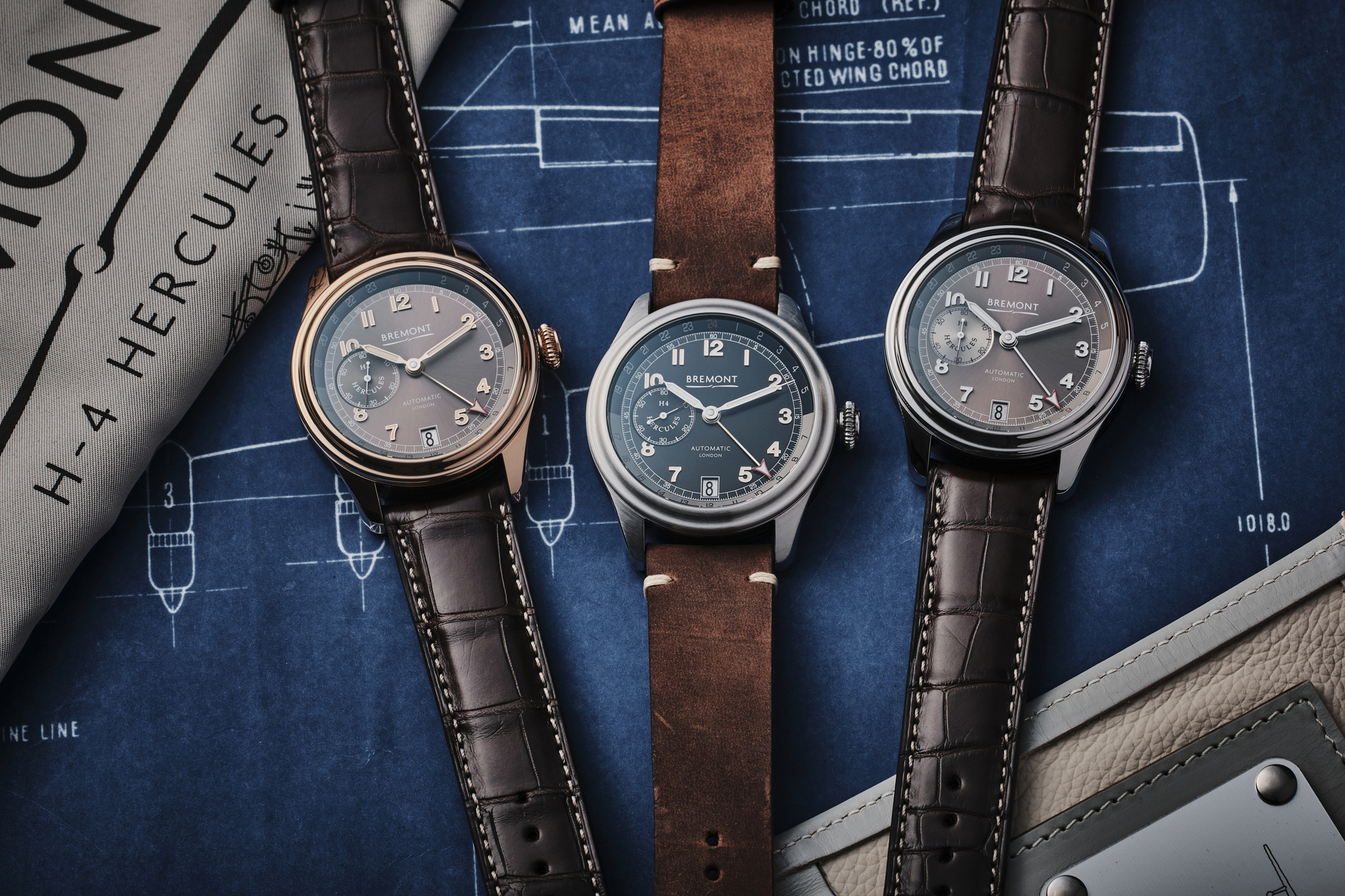 The watches created in honor of that massive craft are offered in three versions, all limited editions. Not only are they a feat of grand micro-engineering, top-notch watch design and chronometer precision, but also each one boasts a piece  from the original “Spruce Goose” aircraft. Each automatic winding rotor is inset with a piece of the original Birchwood veneer of the plane.  Additionally, original aileron fabric from the aircraft’s control surfaces can be found sewn into the English-made bridle leather packaging.

The 43mm  Bremont H-4 Hercules is available in stainless steel (300 pieces), rose gold (75 pieces), and platinum (75 pieces), with each variation featuring a distinct dial colorway in brown or black. The timepiece is powered by a new slate grey colored BWC/02 movement (built in partnership with La Joux Perret), incorporating GMT functionality, along with hours, minutes, and a smaller non-hacking seconds hand at 9 o’clock. The watches retail for $11,895 in steel, $22,495 in rose gold and $30,995 in platinum. 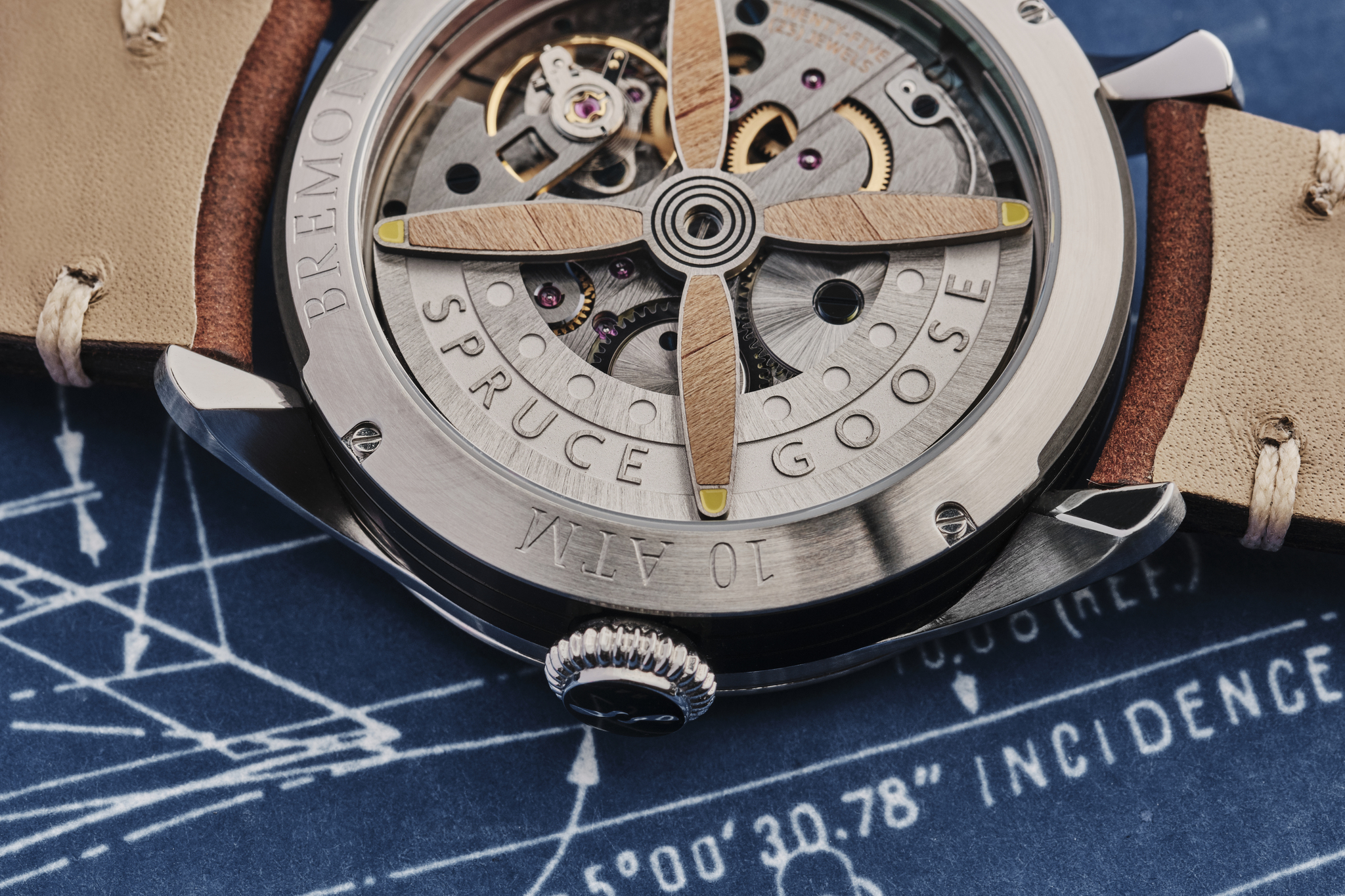 Caseback of the H-4 Hercules watch by Bremont.

The flying boat, famously known as the ‘Spruce Goose’, is as legendary as its inventor Howard Hughes. Because it was war time, many materials were off limits for building, including light-weight aluminum. As such, Hughes opted to create the craft using light-with birch wood. Up until 2019 it was the largest aircraft in terms of wingspan ever to have flown. It is still the biggest flying boat ever to fly and will likely remain so forever.

“Giles and I have been fascinated by the story of the H-4 Hercules since childhood. The sheer ambition of building an aircraft on that scale using wood is remarkable. The Hercules is a true engineering triumph that pushed the boundaries of aeronautical design. It paved the way for the large aircraft we use today, and did it with style, panache and just a dash of Hollywood,” says Bremont Co-Founder Nick English.

Although the name ‘Spruce Goose’ is world famous, Howard Hughes disliked this nickname because it was erroneous (the wood was birch not spruce) and because he felt it insulted the engineers how spent month after month building the craft.

The movement of the new H-4 Hercules watch has an automatic winding rotor incorporating some original birchwood veneer that took to the air on that famous flight in 1947. The tungsten rotor features this veneer from Howard Hughes’ H-4 Hercules, as four propeller blades. The wood (which was made available only through essential preservation work on the H-4) was carefully shipped to the UK from the Evergreen Aviation & Space Museum in McMinnville, Oregon, (where the craft resides). Once in England, it was painstakingly cut to size by the bespoke furniture makers Silverlining. Furthermore, original aileron fabric from the aircraft’s control surfaces is sewn into the English-made bridle leather. 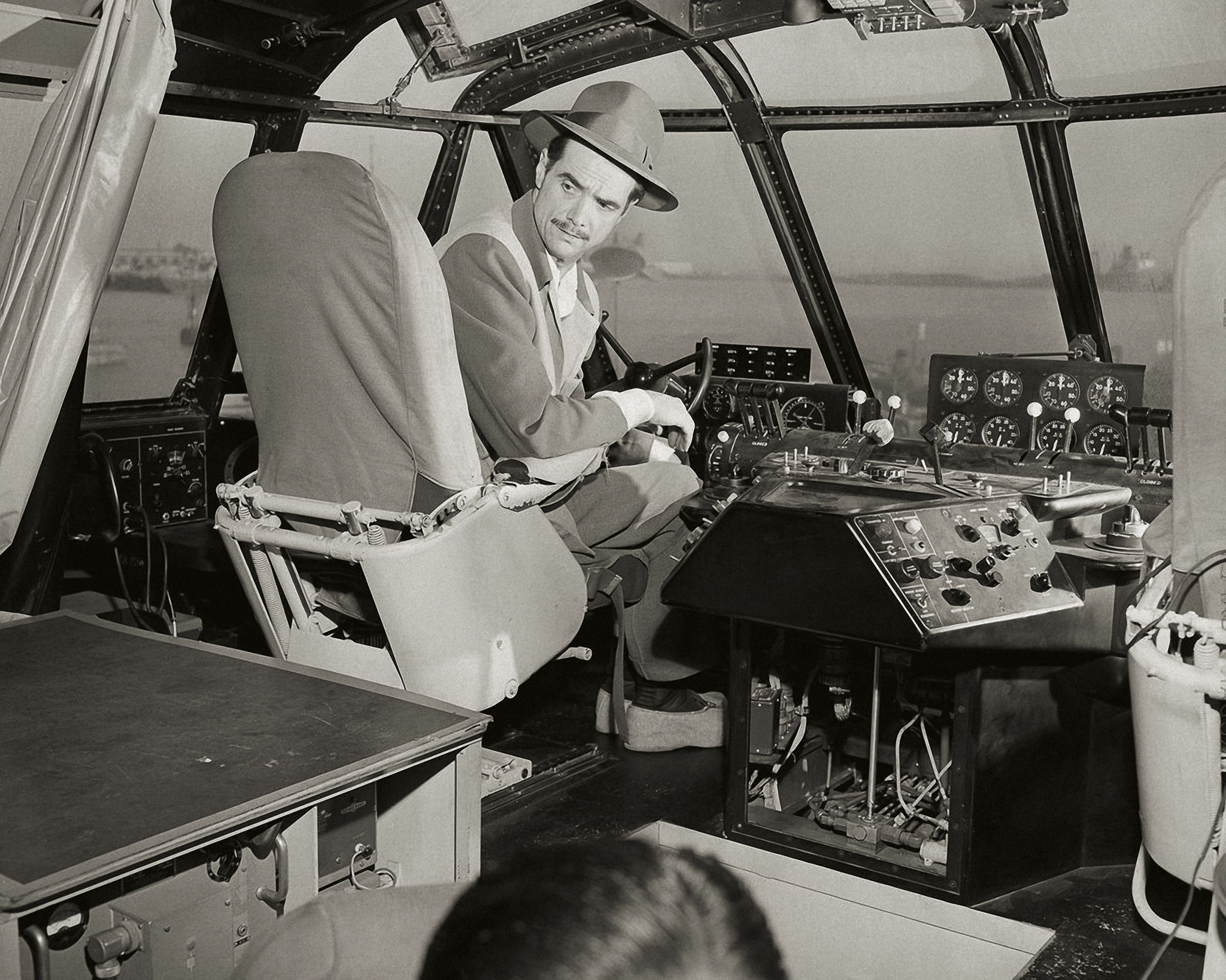 Howard Hughes in the cockpit of the H-4 Hercules

“Four years after Hughes’ death in 1976, rumours circulated that the airplane was going to be disassembled so that pieces could be given to museums around the country. There were public protests, and the United States House of Representatives voted to declare the ‘Spruce Goose’ a national treasure. The aircraft is not only an engineering feat of huge magnitude, it’s also an aesthetically beautiful machine.

Bremont Co-Founder Giles English comments, “Hughes’ obsession with detail and striving for perfection is evident everywhere in this aircraft. The H-4 wasn’t so much built as crafted, its flawless silver surface, devoid of rivets and bumps synonymous with 1940’s aviation, shows that this aircraft was a masterpiece of design and manufacture.” 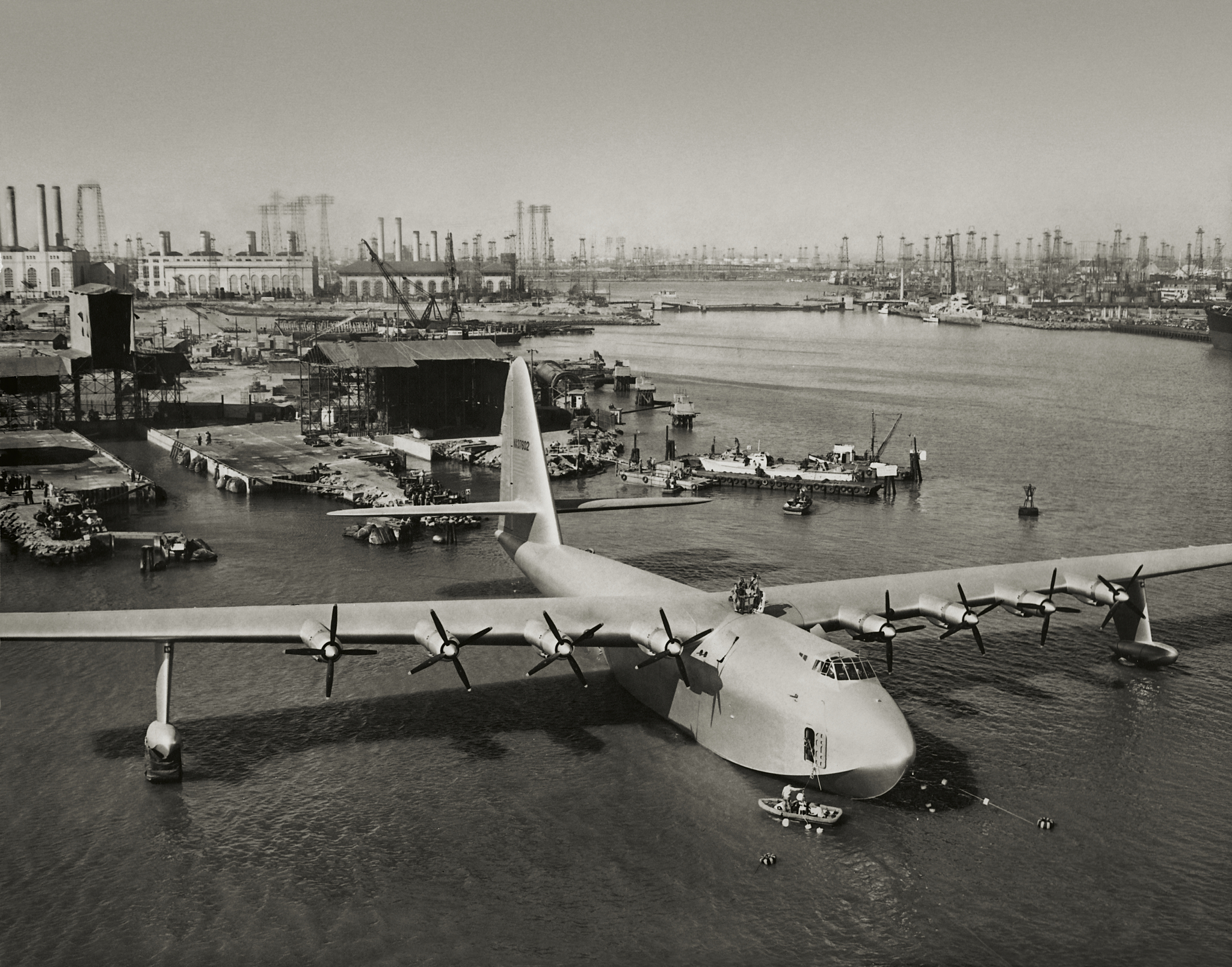 Introducing The Vacheron Constantin Year Of The Rabbit Watch
January 22, 2020

Introducing the Piaget Year Of The Rabbit Watch
January 22, 2020