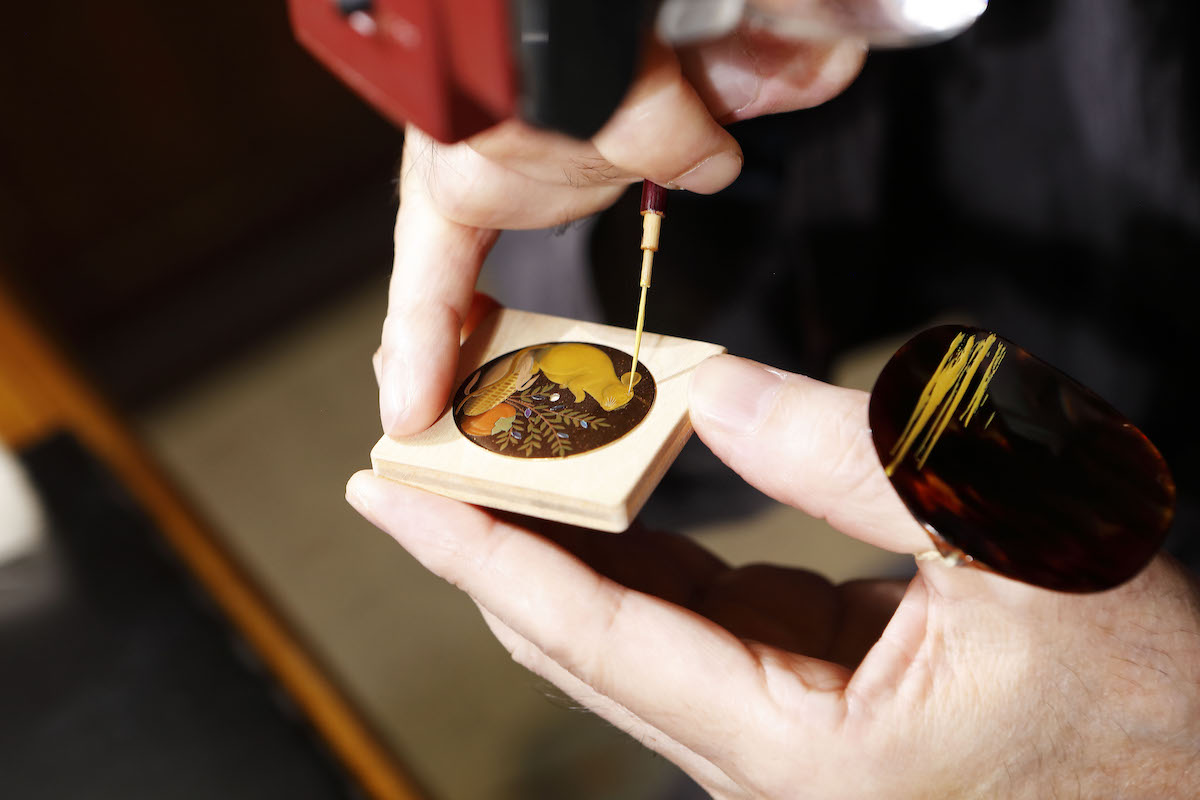 For us here in America, the thought of a rat is mostly affiliated with big cities, garbage dumps and all things ugly. We conjour sayings like “you dirty rat” or movies like Ben with rats trained to kill.  However, in other cultures, the rat is a revered animal. In China, for instance, the rat is associated with intelligence and resourcefulness. So, with the Chinese New Year starting this weekend (January 25, 2020), it’s a good time to take a look at some of the most unusual watches on the market for this year’s Chinese Zodiac: The Year of the Rat. Several top brands, including Chopard,  Harry Winston, Vacheron Constantin, Blancpain, Panerai, Jaquet Droz and Perrelet are releasing watches designed to celebrate the typically uncelebrated rat.

According to legend, the Rat finished first in a great race hosted by the Jade Emperor, the ruler of all gods, who invited all the animals to visit him before he went to Nirvana. The rat used its wits to finish ahead of animals much more powerful than it. By jumping on the back of an ox to cross a river — and then jumping off and running to the finish line, it won the first place in the zodiac calendar. The Rat has since been associated with intelligence, ingenuity and ambition.

Here we bring a close-up look at the top 10 “Year of the Rat” watches. 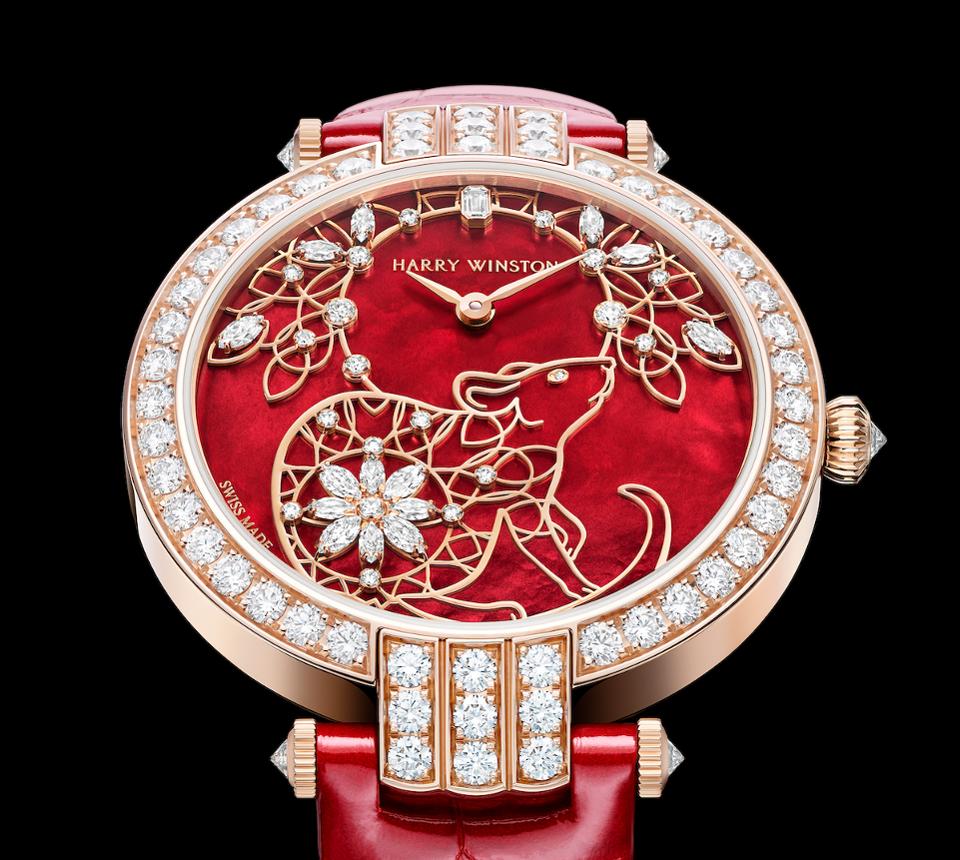 Paying tribute to the ancient Chinese art of paper cutting , the Premier Chinese New Year Automatic 36mm features a bright red painted mother-of-pearl dial with the rat depicted using the paper-cutting technique developed in ancient China. Created in a limited edition of just eight pieces (the luckiest number in Chinese numerology), the red dial color was selected by Harry Winston’s artisans because it also represents luck and happiness and is supposed to ward off evil. That, combined with gold (the symbol of good fortune), and the rat make this watch a true good luck charm.

The paper cutting technique is referred to as jianzhi, and was developed in the Tang Dynasty. The sheets of paper are folded and then cut, with the result, when the paper is opened, being a string of paper figures with lots of negative space, or air, between them. To create the dial, paper has been replaced with thin gold and the entire rat, as well as the scenery surrounding it, is created using one piece of 18-karat rose gold.

In typical Harry Winston style, the watch is set with both brilliant-cut and marquise-cut diamonds that are meticulously set on the case, dial, and buckle. At 12:00 on the dial, resides a single emerald-cut diamond, the late Harry Winston’s favorite cut. In total, 109 diamonds weighing just under three carats, grace the watch. The Premier watch houses measures 36mm, as its name suggests, and is powered by a 210-part mechanical automatic movement that is visible via a sapphire crystal case back.

Chopard Year of The Rat 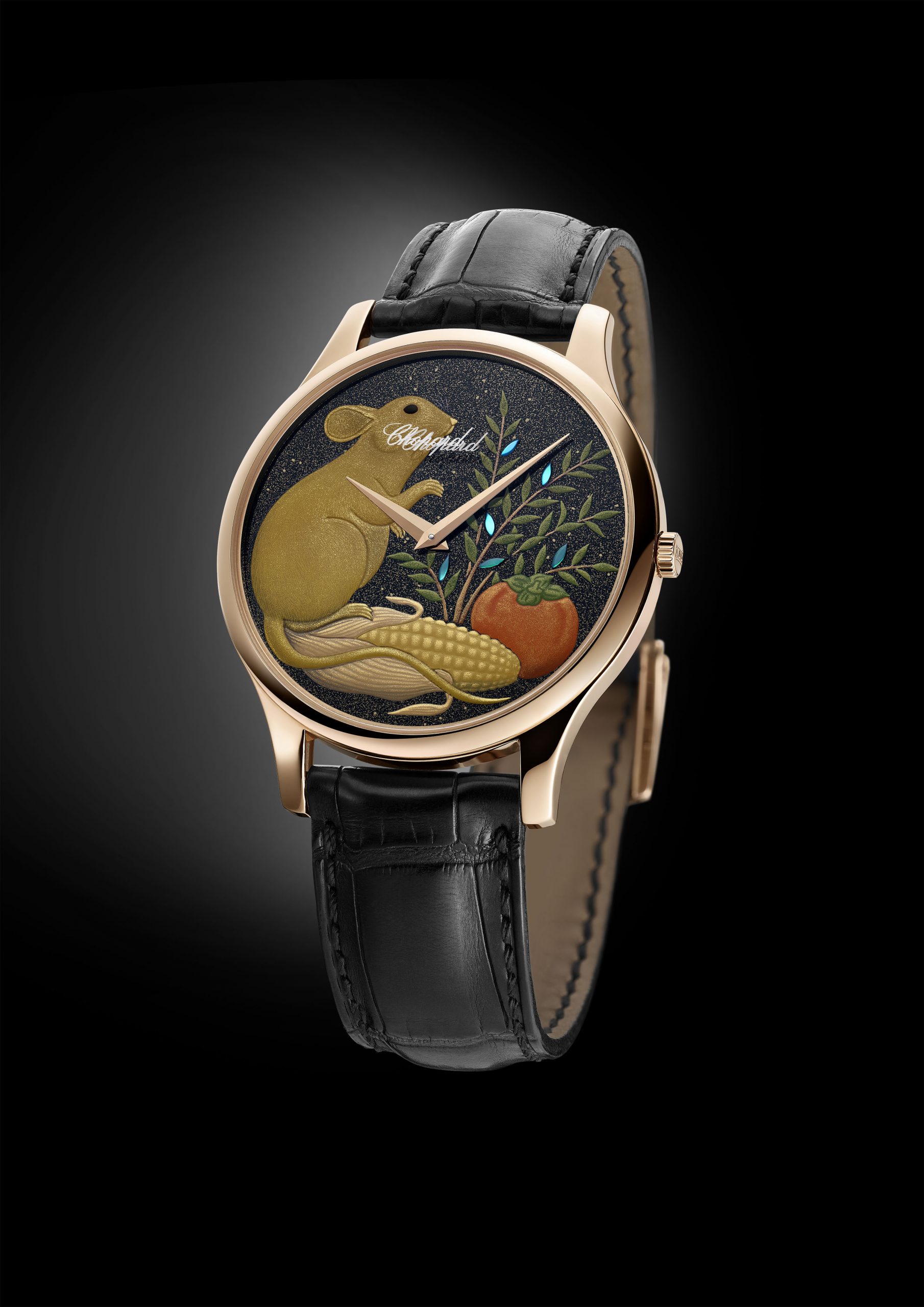 Chopard Year of the Rat watch.

For itsYear of the Rat watch, Chopard created in a limited edition of just 88 pieces in 18-karat rose gold, with a dial made using the ancient Japanese art of Urushi painting. The golden-hued rat sits atop an ear of corn (which suggests abundance) against a stunning midnight blue background. Next to him is a Khaki fruit that resembles a tomato. It is picked in winter and represents longevity. There is also sprig of a plant with flowers in bright blue. The overall scene is supposed to represent intelligence, resourcefulness and a sign of optimism, according to Chopard. Created entirely by hand, the artist combines traditional Japanese lacquer with gold dust to achieve the gold flecks. The Urushi lacquer is actually sap from a Urushi or varnish tree that grows in Japan and China. The sap can only be harvested once a year and in its raw form is a resin. The resin is then left to sit for several years before it can be treated to become soft and pliable enough to paint with. The thick syrupy lacquer is said to be highly resistant to scratches. It retails for $24,600. For more details on this watch, read this.

Blancpain Year of the Rat watches 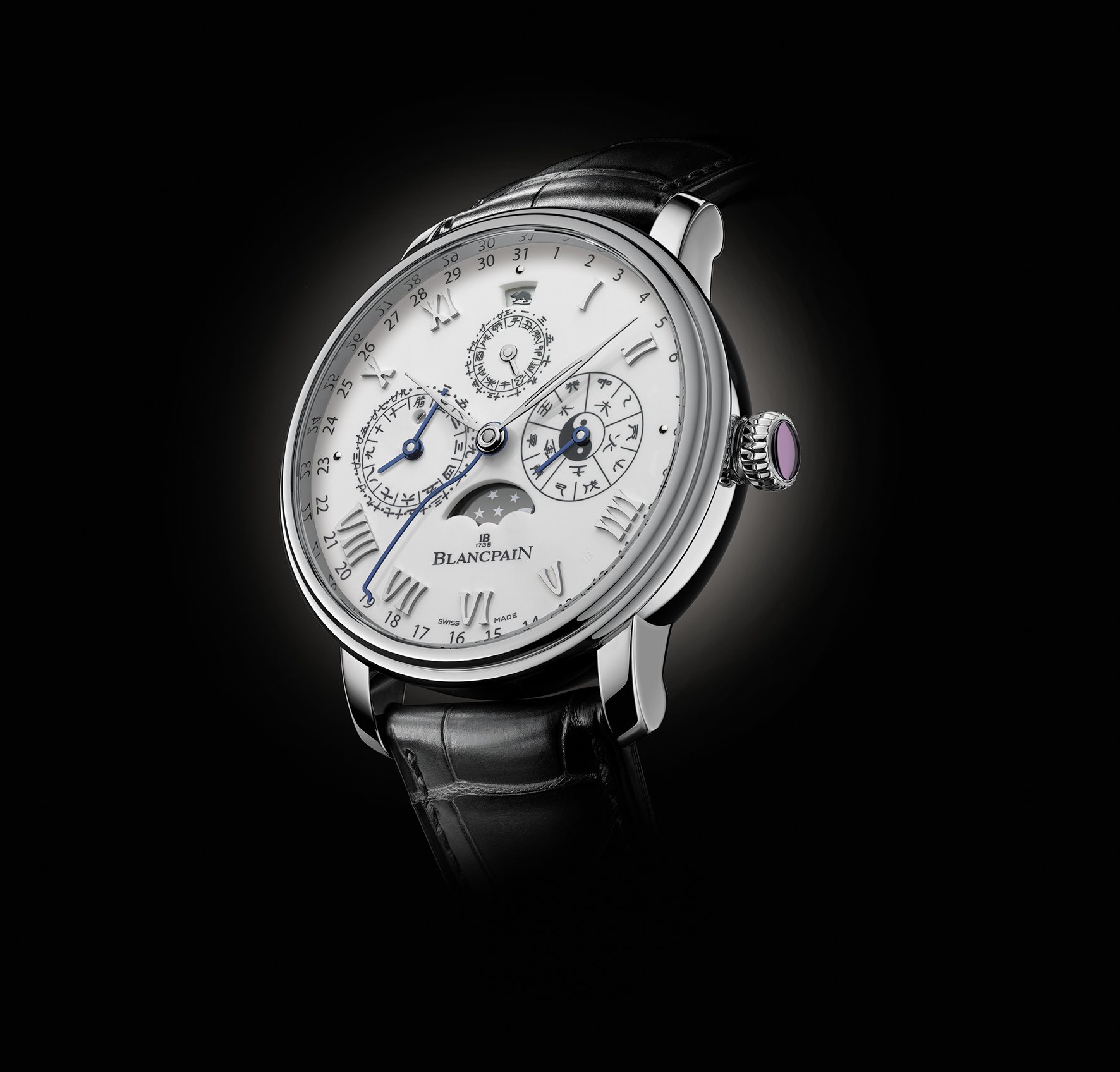 Blancpain Villeret Traditional Chinese Calendar watch for the Year of the Rat.

This year, Blancpain went all out for the Chinese new year, creating not just artistic renditions, but also a perpetual calendar.  The Villeret Traditional Chinese Calendar watch, created in a limited edition of 50 pieces, is the result of five years of research and development and includes the Chinese calendar with double-hour indication, Gregorian calendar and moon phases, as well as the signs of the Chinese zodiac. The 45mm white gold watch is powered by a 464-part self-winding movement with an engraved rotor with a rat on it. The watch retails for $87,800. 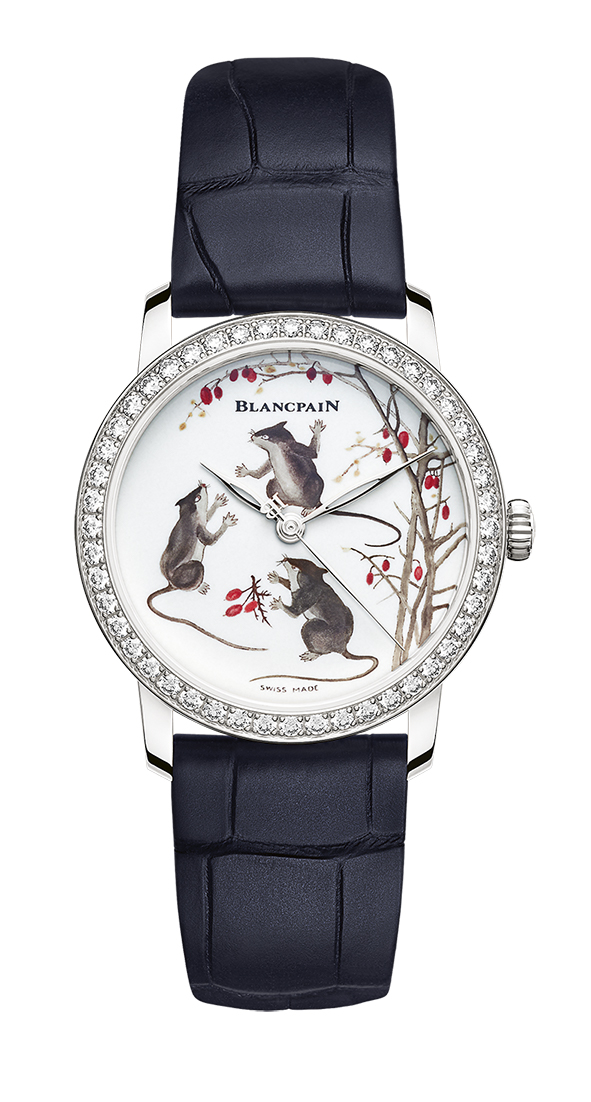 Blancpain also this year created a Metiers d’ Arts watch in an eight-piece limited edition series with a hand-painted porcelain dial. For the dial, the porcelain — made of quartz stone, feldspar and kaolin powder —  is diluted in water to achieve a pulp that is then put through a sieve and filtered before being cast in a dial-shaped mold.  The dial is then dried and fired at 1,000°C to harden it and prepare it for painting. Each dial is then individually hand-painted by a single artist  using enamel. The result is that each dial is unique.  Following the painting, a lengthy 1,200°C firing stage fixes the colors on the porcelain. The ability to achieve such a high temperature on porcelain would be impossible with an enamel dial on a gold base, and the heat allows for more intense, rich colors.   The watch is set with 48 brilliant-cut diamonds, and is powered by the 1154 automatic movement, whose exquisite finishes can be viewed via a sapphire case-back. 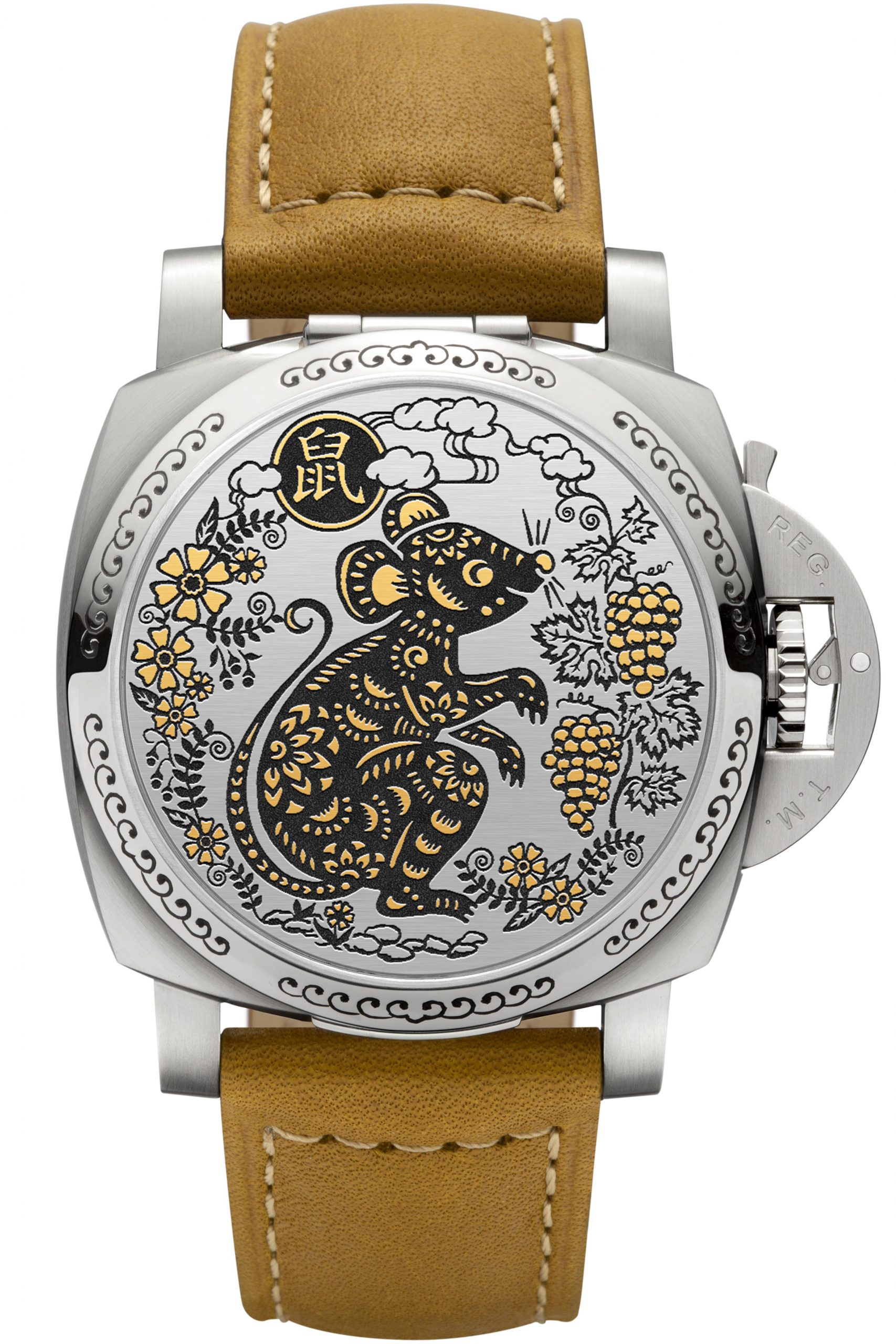 For its Luminor Sealand Year of the Rat watch, Panerai creates a decorative hinged cover. Created in a limited edition of 88 pieces, the rat is etched and painted on a hunter-style hinged cover. The 44mm stainless steel watch is created using an ancient Italian art, where a tiny knife is used to etch the motif .After that, layer after  layer of gold threads are hammered into the etched surface.   It takes more than 50 hours to create each cover of the $23,600 watch.

Vacheron Constantin once again puts it Metiers D’Art magic to work in this hands-free haute horlogerie timepiece.  The Métiers d’Art The legend of the Chinese zodiac Year of the rat watch depicts the intelligent rat at the center of the dial in a sculpted format. Powered by the brand’s  Caliber 2460 G4, the hours, minutes, day and date are displayed via four apertures around the dial. The background of the watch is created using multiple techniques, including a paper-cutting technique called Jianzhi, Grand Feu enameling, etching and sculpting. Two versions are offered: white gold with a blue dial and rose gold with a red bronze-hued dial. 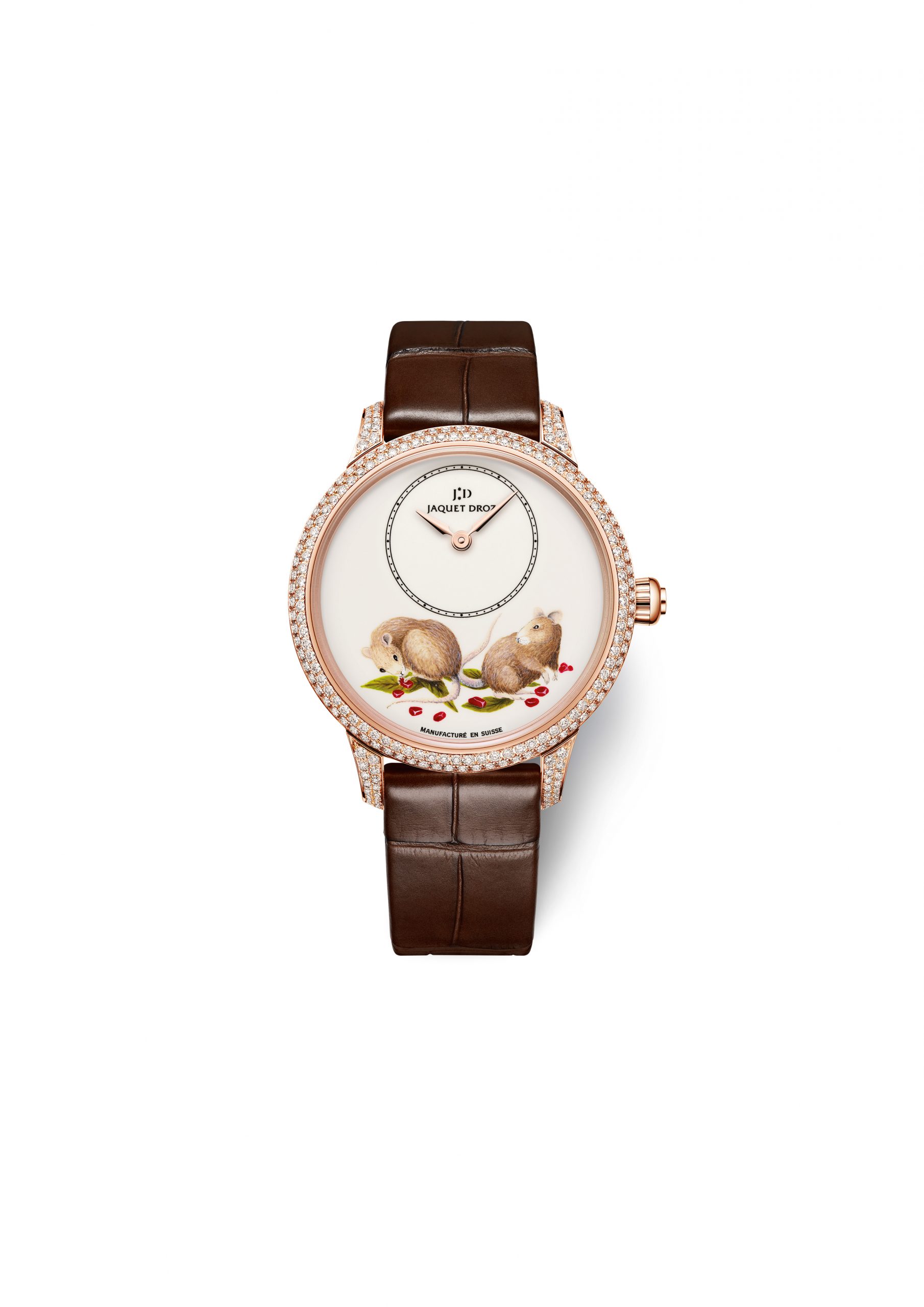 This year Jaquet Droz creates four different Year of the Rat watches  in its Petite Heure Minute watch. In each of these creations, Jaquet Droz pairs the Rat with the pomegranate,  a symbol of life and fertility since ancient times because of the many seeds contained within it. Two models (Petite Heure Minute 35 mm and 39 mm) depict two rats on a Grand Feu enamel dial with a bed of leaves dotted with pomegranates around them. Both variations are produced in red gold, and the 35 mm model is set entirely with diamonds (case and lugs). The case back of both models houses an oscillating weight designed especially for this limited series of 28 pieces. A second scene, engraved in red gold, depicts two rats reveling in a basket of pomegranates, continuing the metaphor of prosperity, abundance and intelligence.

For the 41 mm version, the Petite Heure Minute is available in two other variations that explore the same theme. These versions use an onyx dial as the backdrop for a Rat holding a pomegranate in its hands. These two prestigious pieces are crafted in either red gold or white gold. The white gold version is set with 272 diamonds. The pomegranates in these versions are depicted using snow-set rubies. Just eight of each will be made. 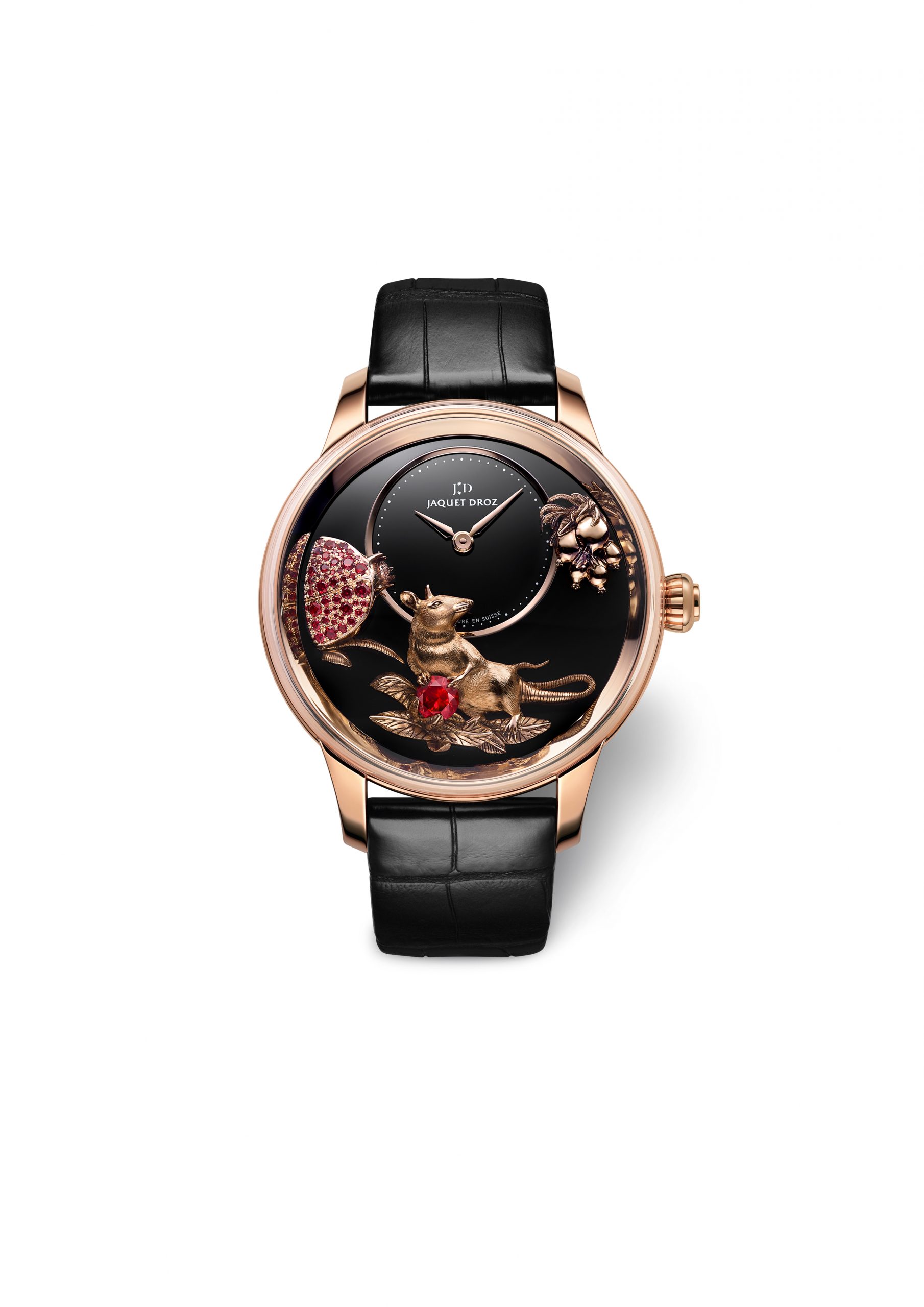 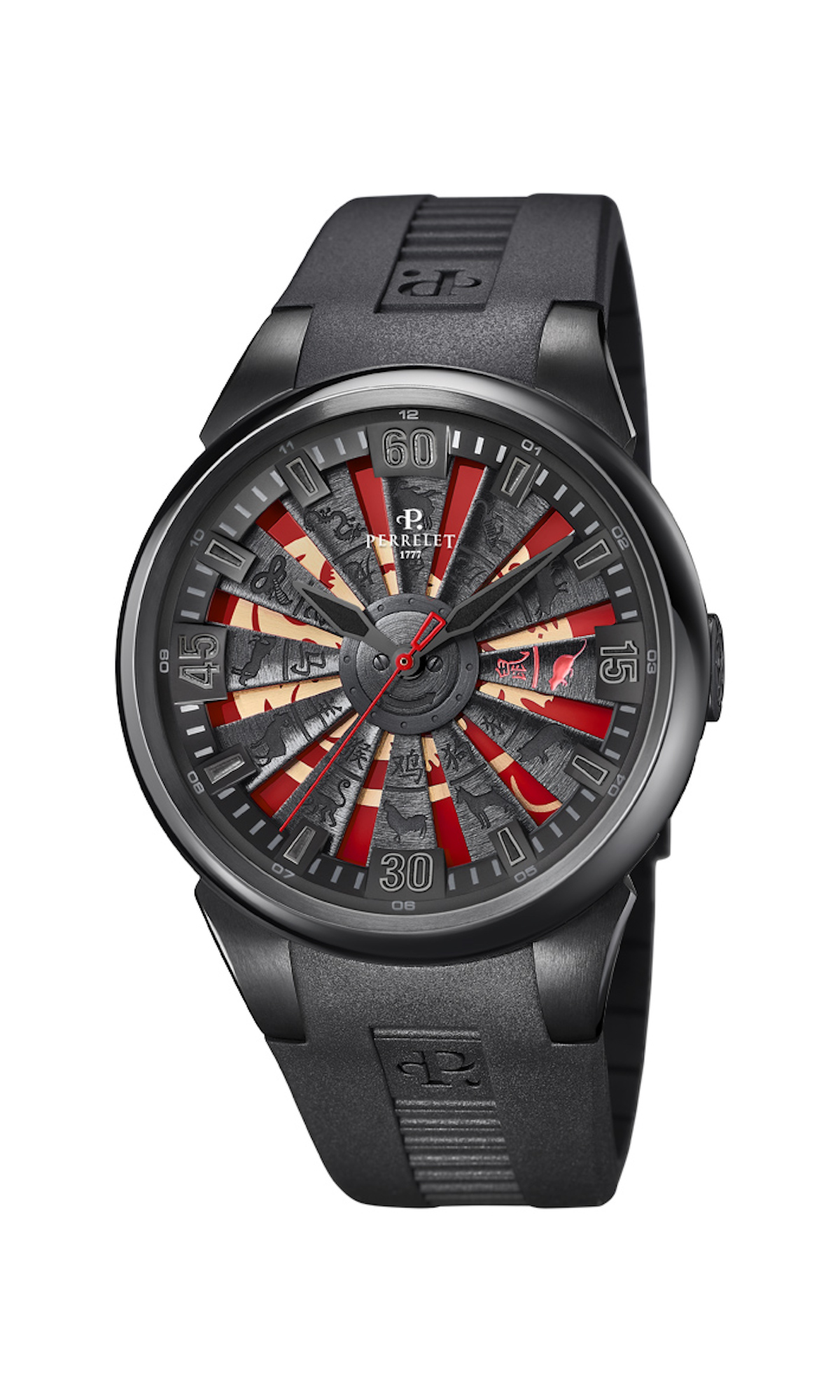 As in previous years, Perrelet celebrates the Chinese New Year with a timepiece from its Turbine collection dedicated to the year of the rat. The Turbine collection features a lower dial and an upper dial with turbine-shaped blades with openings between them that give the wearer a glimpse of the design motif on the lower dial — which, in this case, is a rat. The 44mm steel case is treated with black PVD and is water-resistant to 50m. The blades, made from anodised aluminium, are engraved with the 12 animals of the Chinese horoscope along with their respective Chinese ideogram. As the star of 2020, the rat is highlighted on the blade at 3 o’clock in an intense shade of red. Five tungsten counterweights are applied under the blades of the turbine –which have to be perfectly balanced during assembly – allow even the slightest movement of the wrist to set the Turbine in motion. As the blades move, the red dial below — with golden rat painted on it — becomes visible. “Turbine Rat” is equipped with calibre P-331, an automatic in-house movement providing 42 hours of autonomy. The sapphire crystal caseback allows a view of the movement with its bridges decorated with Côtes de Genève. Just 100 pieces will be made. 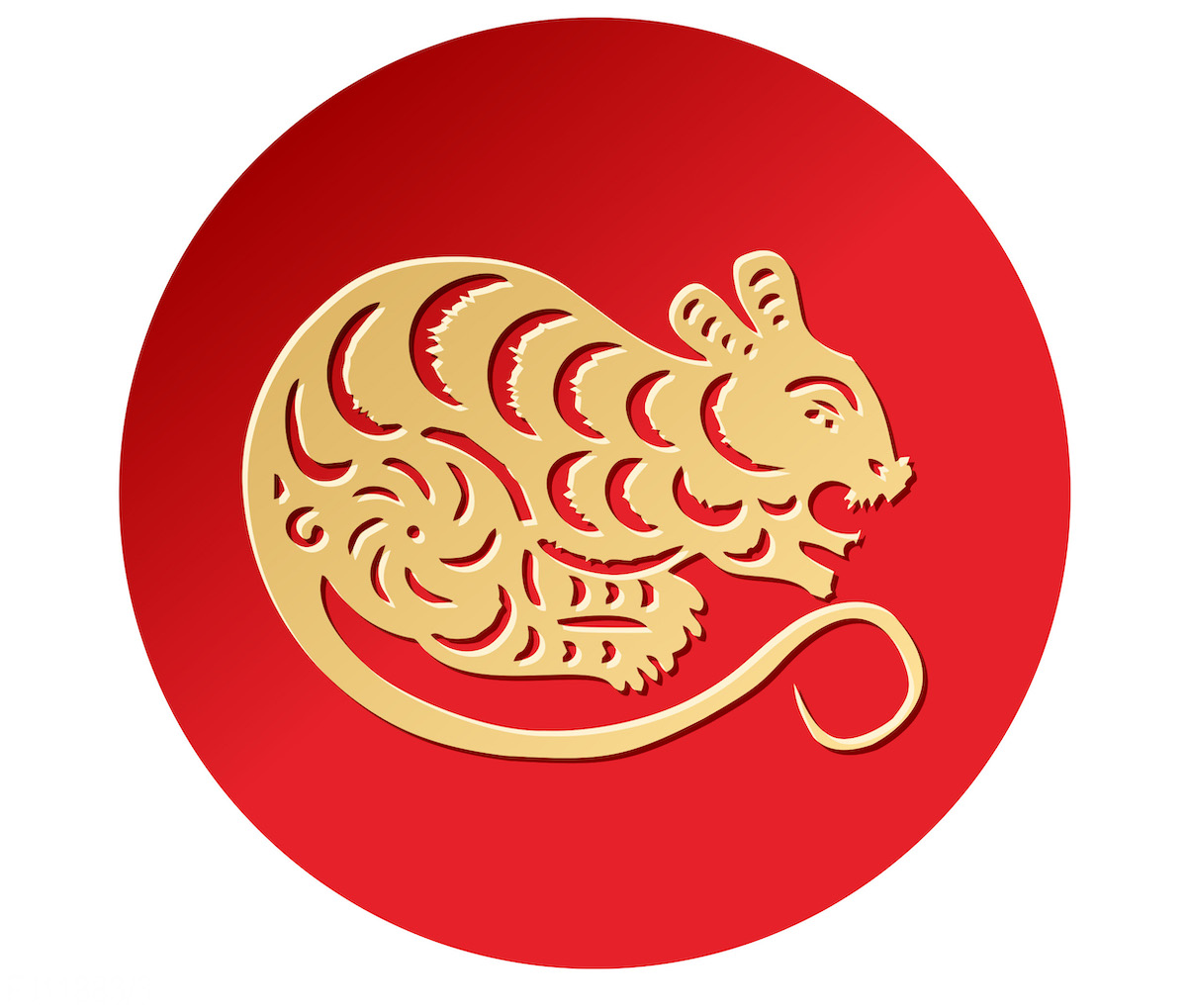 The lower dial of the Perrelet Turbine Year of the Rat watch.