Late last year, I was invited by Corum to visit the Manufacture and take part in an unprecedented program. The brand was repositioning itself, establishing new marketing campaigns and ads, and planning some great new launches — all destined for this year to coincide with its 65th anniversary. The new campaign, Risk is the Reward, is a bold and daring initiative that matches the brand’s core philosophies. To help them launch the new campaign, Corum asked a select group of watch aficionados to discuss the brand on video. Myself, and a host of good friends, including actor and watch designer Aldis Hodge, were happy to oblige. The video below is the first “conglomerate” video to emerge. Individual interviews will be forthcoming.

Since its inception, Corum has regularly been on the cutting-edge of design and aesthetics – introducing powerful collections that were always ahead of their time. Corum’s new “Risk is the Reward” campaign underscores everything the brand has accomplished in its 65 years.  Identifying risk more as an opportunity for success than as a peril or fear, Corum has always been a risk taker when it comes to unveiling incredibly daring product collections that became icons, including the first sports theme model, Admirals, Haute Couture with the Feather Watch, truly “Time Is Money” with the Coin, and of course the Golden Bridge with a watch in its purest form. The new campaign reinforces Corum’s unparalleled willingness to take chances and do things that others have not done before. After all, it is precisely this philosophy and way of thinking that has propelled the brand forward decade after decade.

The all-encompassing “Risk is the Reward” campaign concept is about approaching life with a daring and adventurous spirit. As such, Corum has aligned itself with ambassadors who are also risk takers in their fields. They are people who embody the philosophies of Corum: of thinking outside the proverbial box and against all odds in order to move forward, of being more original and intrepid than anyone else, and of remaining true to themselves no matter what. Among those ambassadors are Miralem Pjanic, footballer for Juventus Turin who fled his homeland with his family to safety during the Bosnian War and then pursued his dreams, and Chinese actor Hu Bing, an aspiring yachtsman who had to retire in his early 20’s due to injury. He then entered the world of acting, pushing himself assiduously to embody characters that leave a vivid and lasting impression.

The adventurous and provocative nature of Corum is captured in the new campaign, which will have digital, social media and print outreach. The print ad for the Admiral line, for instance, showcases a bird’s eye view of the crashing ocean waters as a yacht maneuvers in a race, while the Golden Bridge ad depicts a spectacular view of another architectural icon, the Golden Gate Bridge in San Francisco, which was declared one of the wonders of the modern world – much like the status of the Golden Bridge watch in the modern horological world.  For the magnificent, high-tech Damascus steel LAB 01 collection, a stunning black-and-white zebra motif from nature provides the brilliant visual. Even the evocative Miss Golden Bridge with snow-set diamonds appears with a moody blue snowflake backdrop.

The campaign is the first step of an amazing new adventure for the brand. Not content, though, with shout-outs to the anniversaries, Corum is creating a new Avant Garde style with the Lab 02, and is re-developing its collections to showcase the philosophy of the brand. Those fantastic new watches will be launched progressively over the next 12 months. 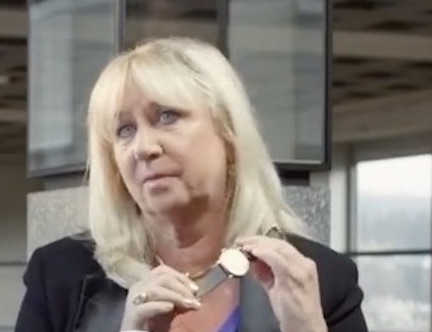