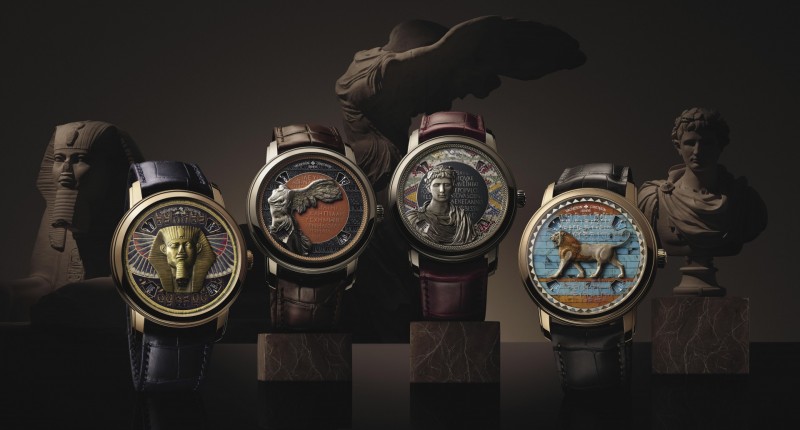 Vacheron Constantin Tribute to Great Civilizations Collection made in cooperation with the Louvre and based on four great works of art found therein.

Standing inside the world famous Louvre in Paris, it’s nearly impossible to take in the depth,  breadth and scope of the art within these walls. From the Greek and Roman sculptures to Leonardo da Vinci‘s Mona Lisa and other famed paintings as well as the Egyptian, Asian and Islamic art, we are immediately reminded of our potential insignificance in this world. The great civilizations of yesteryear, with their tales, their trials and their victories are both haunting and inspiring.

With all of this in mind, it makes us wonder how the venerable brand of Vacheron Constantin ever selected the ancient civilizations to honor first in its spectacular partnership with the Musee Du Louvre.  Today, within the hallowed walls of the Louvre, the brand unveils its Tribute to Great Civilizations collection of métiers d’ art complex timepieces. 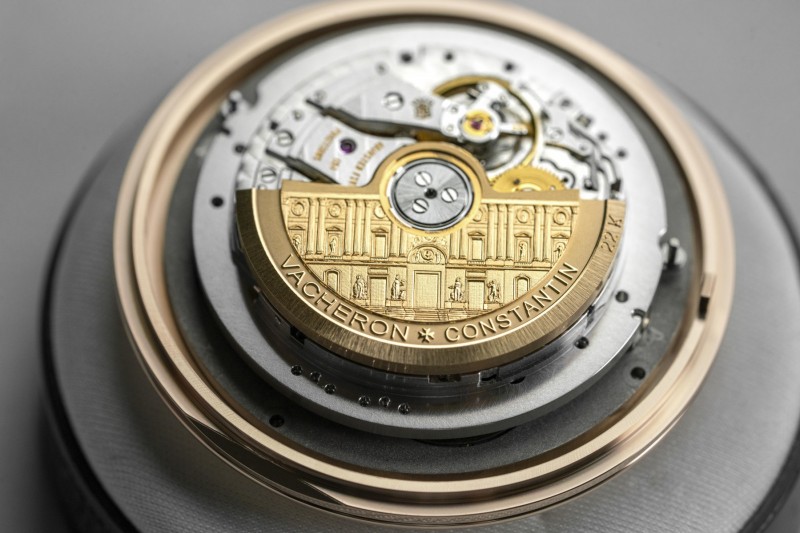 The oscillating weight of each of the Vacheron Constantin Tribute to Great Civilizations Collection, made in cooperation with the Louvre, boasts an engraving of a picture of the Louvre from the 18th century.

In this initial series, four distinct civilizations are being honored, each with a very unique watch that is individually handmade and created in a limited edition of just five pieces. The making of these works of art rival the greatest paintings and sculptures they pay tribute to, with each being a masterpiece for the wrist. In fact, their making was years in the development stages and each watch commands hundreds of hours of precision artwork – including mosaics, hand-painting, engraving, sculpting and more – and precision watchmaking. 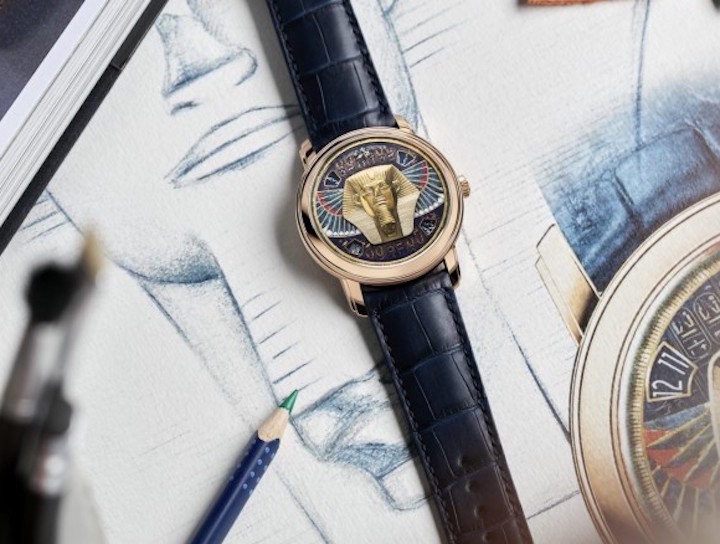 The collection was several years in the making.

So advanced is this collection, that it commands a host of individual articles that will be forthcoming, but for now, we present a general overview of the Tribute to the Great Civilizations of Antiquity.  Essentially, four masterpieces from the museum, each representing a different era, are reinterpreted on watch dials in all their glory. Just selecting the four periods to honor was a work of diligence and a lesson in history. 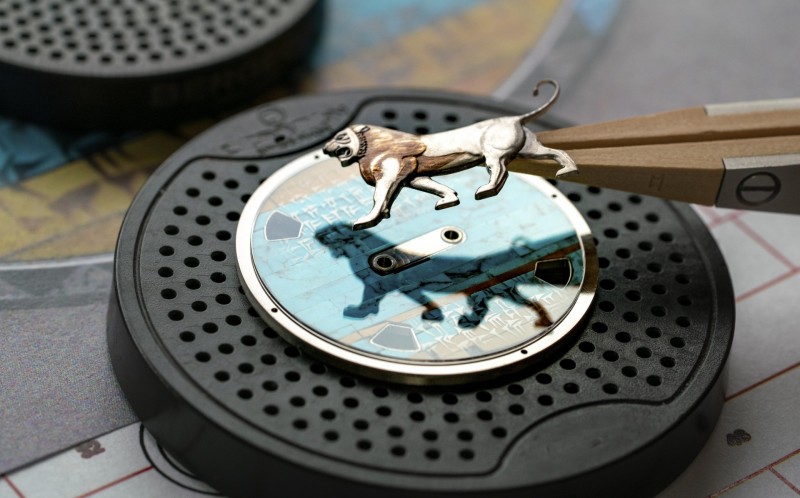 Vacheron Constantin Tribute to Great Civilizations Collection of watches demonstrates a host of important metiers d’arts processes. The watches are created in partnership with the Louvre.

The Persian Empire of Darius the Great, the golden age of Ancient Egypt and the pharaohs of the Middle Kingdom, the Hellenistic period of Ancient Greece, and the birth of the Roman empire with the rise to power of Augustus are the four historically important chapters honored in this first collection, that is the result of the partnership between Vacheron Constantin and the Louvre that was announced in 2019.

The alliance was a perfect fit for both the museum and the brand, as each regularly pays homage to history, culture and heritage. In fact, Vacheron Constantin is the world’s oldest, continually operating watch brand (founded in 1755) and the Louvre opened its doors to the public in 1793, both dedicated to sharing art and archives in an effort to perpetuate the arts. 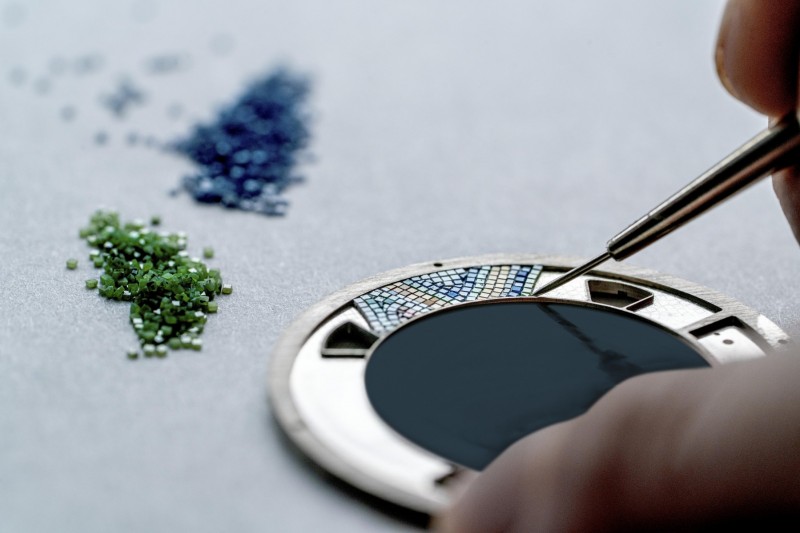 The Tribute to the Great Civilizations series was three full years in the making and is a deft demonstration of centuries of artisan crafts and watchmaking.  Each 40mm dial features incredible ornamentation created using decorative arts that correspond to the time frame. These include Grisaille enamel, champleve enamel, stone marquetry and stone micro-mosaic work and more – each incredibly time-consuming and tedious to execute. Each watch also boasts written elements that utilize the language of the culture and people of each ancient civilization. After all, our languages of today originate with them, as do many of our customs and beliefs.

Before we detail the eras and the watches, let’s talk mechanics. Each timepiece (four versions with five of each being made) houses the self-winding 237-part Manufacture Caliber 2460/G4/2 with discs around the periphery of the dial to indicate the hours, minutes, days and date so that the dial is entirely free of hands – giving the master artisans a clean canvas on which to work their magic. The oscillating weight, seen via a transparent case back, is specially engraved  with the facade of the Louvre in the 18th century. The movement is topped by a dial that is surrounded by a frieze appropriate for the era. 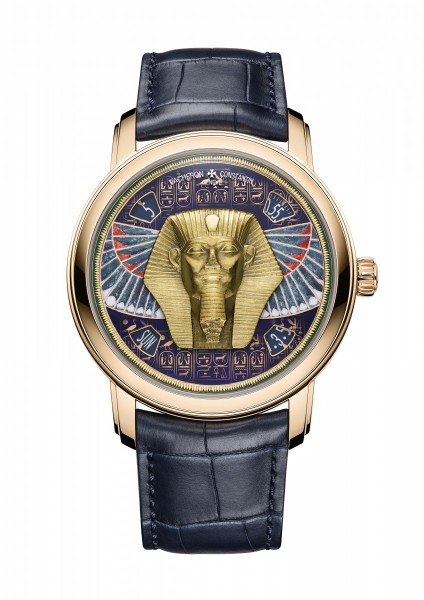 This watch celebrates the ancient Egyptian Empire that reigned from 2035 to 1680 BC. The Great Sphinx of Tanis was the capital of the kings of the 21st and 22nd dynasties and is one of the largest sphinxes preserved outside of Egypt. It has been part of the Louvre collection since 1826. The watch that honors the sphinx boasts a hand carved 18-karat gold head of the sphinx in the center. It is against a backdrop of dark blue and black enamels and showcases mummy wrappings and a coffin created using layers of painted cloth. The necklace on the sphinx head is another work of art created using multiple artistic techniques. 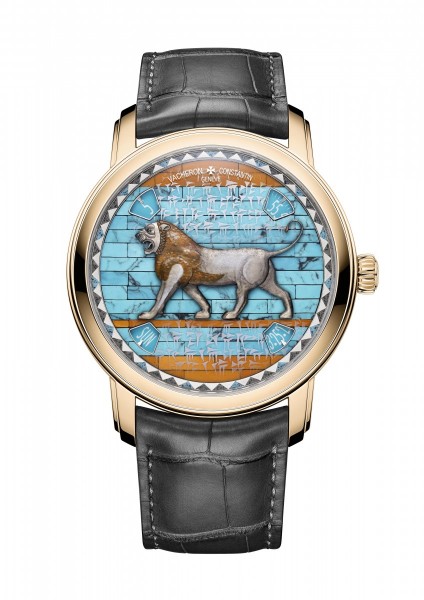 Vacheron Constantin Tribute to Great Civilizations Collection with the Louvre. The Linde Darius

Paying homage to the Persian Empire of the Achaemenids (559-330 BC), the Frieze of Lions was once found in the courtyard of the palace of Darius the Great in Susa (southwestern Iran).  “After freeing themselves from the control of the Medes and conquering Lydia, Babylon and Egypt, the Achaemenids formed one of the greatest empires to have ever existed in antiquity.”

The Lion watch naturally features a hand-carved and sculpted gold lion as the main decorative element. Its muscles, fur and gaze are incredibly detailed. The watch boasts a background brick wall accomplished using stone marquetry made of 69 pieces of exceptionally fragile turquoise and jasper stone fragments with veins. 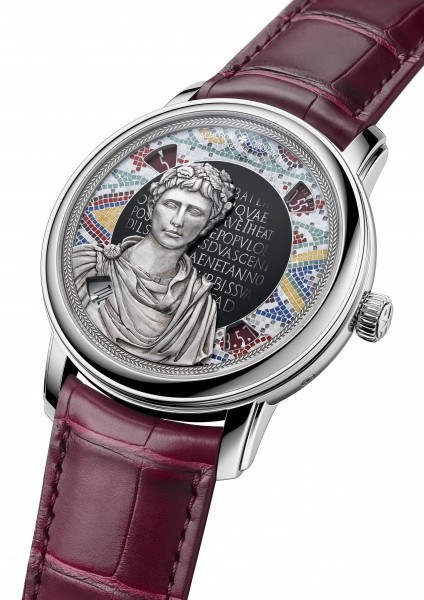 Buste d’ Auguste
From the Roman Empire of the Julio-Claudians (27 BC – 68 AD), a bust of Octavian Augustus inspired the fourth watch. The adopted son of Caesar, the bust of Auguste shows him crowned with an oak wreath given to him when he became the first citizen of Rome. “In actual fact, following his conquest of Egypt, where he defeated Mark Antony, an ally of Cleopatra, he ended a long period of civil wars marking the end of the Republic and became the master of Rome.”

The watch boasts a carved gold applique of the bust and features a blue/green enamel dial. The outer periphery of the dial is meticulously formed using a micro-mosaic stone process that has roots in the 4thcentury arts. Exactly 660 pieces from seven different types of stones are used for this work, including quartzite, red jasper, aventurine, and more. The outer frieze in white gold boasts an engraving and patinated motif. 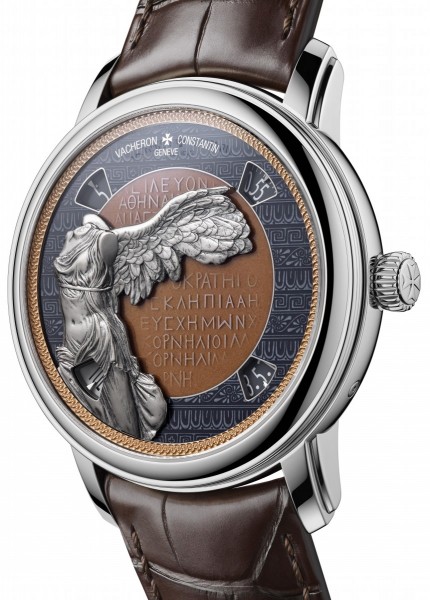 Recognized for its incredible wings, the sculpture in the Louvre is of a winged goddess on the bow of a ship from Hellenistic Greece of the Antigonid dynasty (277-168 BC).  The statue was discovered in 1863 when it was excavated from the Great Gods sanctuary on a small Greek island. The winged goddess watch features a brown enamel dial that has been painted and fired six times to achieve the exact hue. The hand sculpted wings are then attached to the dial, with words from the time period rounding out the look.

Together, these masterpieces are just the beginning of great civilization tributes. As of press time, their prices had not yet been disclosed. Continue to visit for in-depth looks at each of these watches in the coming month.

Rolex 24 At Daytona Witnesses Debut of Hybrid Cars Category
May 24, 2022

Ulysse Nardin, Oris, Norqain Support Our Environment And Resources
May 24, 2022